ABSTRACT: Herbal treatment used in healthcare system from ancient time. Plants had been used by all cultures, ethnic group and society throughout history in the whole world. Plants are the potential source of secondary metabolites which have high medicinal value and huge utility in healthcare development. Herbal medicines are now in huge prospects in the developing and developed nation for basic health treatment. It is inexpensive and has minimal side effects. Cleome rutidosperma DC (Family-Cleomaceae) is an annual herbaceous plant, and it is commonly known as Fringed Spider Flower. Cleome rutidosperma is not only a weed, but it is an important medicinal plant, too. This review deals with phytochemical, morphological, taxonomical and other important biological aspects of Cleome rutidosperma. Literature survey indicated that this medicinal plant is available in tropical parts of India has various reported biological activities like analgesic, anti-pyretic, anti-inflammatory, locomotory effect, wound healing property, anti-microbial, anti-oxidant, anti-convulsant, anti-diabetic, diuretic and laxative activity etc. The review was done to find out morphological, physicochemical and phytochemical screening of Cleome rutidosperma plant parts. This review can be helpful for identification and preparation of monograph of the plant.

It is found in waste grounds, humid or grassy places with trifoliate leaves and small blue, violet with whitish patches flower, which turns pink as they age. The elongated capsules display the asymmetrical, dull black seeds 1.

In West Bengal, it is known as Nil Hurhure or Beguni Hurhure 2. Cleome rutidosperma belongs to the family of Cleomaceae and native to Tropical Africa. It has been introduced and now naturalized in different regions of Asia, Australia, America and West Indies 3, 4, 5, 6. 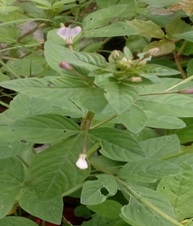 Ethnomedicinal Uses: Ayurveda, Siddha, Yunani medical practitioners and localized or rural kabiraj used the different parts of Cleome rutidosperma as leaves, roots, and seeds for anti-convulsant, anti-inflammatory, anti-stimulant, anti-scorbutic, rube-facient, anti-diarrheal, vesicant and carminative, etc. disease purposes. The anti-oxidant, anti-plasmodial, analgesic, locomotory, anti-microbial, diuretic, laxative, anthelmintic and anti-diabetic activity of the certain extracts of the plant has already been reported 5, 6, 11. The anti-plasmodial activity of the Cleome rutidosperma was shown from chloroform-methanol (1:1) extract of the leaves 12.

Different parts of the plant showed anti-pyretic, diuretic, laxative, anti-microbial, analgesic, anti-inflammatory, anti-oxidant, and free radical scavenging activities in different solvent extracts. The roots of the Cleome rutidosperma are also important from the medicinal point of view. The roots were reported to have a hypoglycemic effect and anthelmintic activity 13, 14.

In African countries, it is occurring as a weed and is less well known about for its medicinal properties 10. The leaves of Cleome rutidosperma are eaten as a cooked vegetable or added to soup 1, 9, 15. They have a bitter taste like mustard and in Uganda clarified butter (ghee) is sometimes added to give it more flavors. It is occasionally taken as a pot herb. Leaf sap is applied in Ghana, Gabon, and DR Congo to cure an earache, ear-inflammation and deafness 3, 4. In Zaire, Cleome rutidosperma is used for deafness also. In Ghana and by the Igbos of South Nigeria a leafy-extract is used to treat irritated skin, prickly heat etc. and in Nigeria, it is used to treat convulsions also 11. It is used as a vegetable of local needs in different parts of the world. Its phytochemical, proximate, nutritional and medicinal effects need much more attention and research for future uses in phytomedicine. It has almost similar medicinal uses like Cleome gynandra Linn. and with this species, Cleome rutidosperma is confused in many times by the non-botanists 1, 15.

Botanical Description: Fringed Spider Flower Fig. 2A is an erect, annual herb up to 100 cm tall branched from the base. The plant has angular stems or finely pubescent or glandular pubescent, green-purplish.

FIG. 2: A) LEAVES AND FLOWERS; B) PODS; C) SEEDS OF CLEOME RUTIDOSPERMA

Habitat: Cleome rutidosperma grows at low altitudes in ruderal, humid, hot conditions with temperature ranges from 21 - 24 °C. It grows up to 400 m altitude and areas with an annual rainfall of 1500 - 3000 mm. Sometimes it is present with the other species of the same genus like Cleome viscosa in various types of habitat as water margins, swamps, coastal sands and forests, cultivated fields, lawn, roadsides Fig. 3 and waste ground or disturbed areas. Cleome rutidosperma is intolerant of cold, frosts and drought. Plants die after 2 days of temperature below freezing 16, 17, 18. 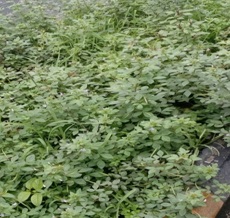 Cleome is a genus in the family of Cleomaceae, and it is under the order of Brassicales. Previously the genus Cleome was under the family of Capparaceae. But according to recent DNA studies this genus is placed in the family Cleomaceae, and it is more closely related to Brassicaceae than Capparaceae. Cleomaceae is a family of plants that includes 10 genera and about 300 species distributed in tropical and warm temperate regions. In the CAB Thesaurus, the genus Cleome is still listed in the Capparaceae family. Though APG III systems of classification placed Cleomaceae family to the order Brassicales. The taxonomic tree shows the APG III systems of classification. B & H system of classification placed Cleome genus in family Capparidaceae and order Parieatales. CAB Theasaurus continues to use the Cronquist system 19.

Comparison with Other Species: In maximum African countries it may be difficult to distinguish between Cleome rutidosperma and Cleome iberidella. Cleome iberidella has narrower leaves and pubescent fruit. It is also confused with Cleome viscosa and Cleome gynandra. Cleome viscosa probably originated in Asia. It differs from Cleome rutidosperma in morphological features. Cleome viscosa is having a viscid and stinking indumentum, yellow flowers and more than eight stamens. C. gynandra is also widely distributed in tropical regions of the world and primitive native to Africa and Asia. The main characteristic that distinguishes Cleome gynandra from Cleome rutidosperma is the insertion of the stamens 20.

From a study, it is found that among ten medicinal plants which were analyzed, this weed showed the lowest amount of alkaloids (0.32%) and the highest amount of tannin (15.25%) presence. Among minerals Na and Zn also present in the seed. From various research studies result suggest Cleome rutidosperma is a potential source of human food or incorporation into livestock feed.

Phytoconstituents like terpenoids, saponins, flavonoids and phenolic compounds are main components for anti-microbial, anti-oxidant, diuretic and laxative effects of the ethanolic, aqueous extract and its fractions of this plant. The various chemical experiment of this plant was carried out, and several groups of phytochemical compounds were isolated from this plant. Ghosh et al., (2018) analyzed the plant pigments of Cleome rutidosperma along with other medicinal plants. The research study showed that the highest amount of total carotenoids concentration was found in this plant among the other experimental herbaceous plants. Though other two research studies showed that these plant pigments (chlorophyll-a, chlorophyll-b, total chlorophyll, and total carotenoids) might vary with the major environmental factors like air pollution and it may vary with seasonal changes 2, 6, 15, 22, 23, 24, 25.

History of Introduction: There is different school of thoughts and controversy about the history of the introduction of Cleome rutidosperma. There is a high probability that Cleome rutidosperma was introduced accidentally as a contaminant or as a weed in the nursery materials and substances. In Australia, it was discovered in August 2000, near to Darwin's Fort Hill. After three months following a public awareness campaign, Cleome rutidosperma was discovered at another four sites in Australia. This plant species estimated to have been present approximately 10 years before their discovery. By 2001 it was known to be present at sixteen sites at Darwin’s Fort Hill. In the West Indies, herbarium collections showed that this species was first collected in Jamaica in 1903. The risk of introduction of Cleome rutidosperma is moderate to high 26, 27.

Physiology and Phenology: Cleome rutidosperma is an annual plant reproducing solely by seeds. In Africa, flowering and fruiting plants can be found throughout the year, although most abundantly in the rainy season 10. In China, its flowering and fruiting season is from June to September 30. In North America, its flower and fruiting season are from almost throughout the year 31. Laboratory germination studies showed that maximum germination happens at 30 °C (23%), and no seed germination occurred at 20 and 40 °C. Seeds were unable to germinate at soil depths more than 5 cm. Gibberellic acid, auxin, and potassium nitrate increased growth and germination of Cleome rutidosperma 32.

Environmental Impact: Cleome rutidosperma is a weed in disturbed ground, roadsides, lawn, humid, ruderal and waste places, as well as in natural and semi-natural coastal forest 17, 33.

Movement and Dispersal: The pollen or seeds of this plant species easily dispersed by animals, water and machinery associated with human activities. The plant has the potentiality to grow like a weed in ruderal, humid, disturb or waste places, crop fields and gardens. Cleome rutidosperma is listed as a weed in agricultural and horticultural land in Asia, Australia and the Caribbean islands and it has the potentiality to spread much faster rate 23. Seed dispersal is myrmecochorous and ants are attracted to the seeds by the fatty elaiosome. Wind, gravity, water can disperse seeds, and as a contaminant in farm machinery, farm produce, and soil 26.

Cultural Control: In maize crops in the Philippines, integrated cultural control techniques coupled with the application of herbicides to control Cleome rutidosperma. Similar techniques recommended in cotton as well. In Nigeria and few other African countries, four weekly hands-on weeding for the first 8-12 weeks after sowing of white yam crops in different regions of that particular country for observing various effects 28, 37, 38, 39.

Chemical Control: In Malaysia, some scientists controlled Cleome rutidosperma in cover crops (Pueraria phaseoloides, Centrosema pubescens, Calopogonium caeruleum and Mucuna pruriens) using neburon and napropamide. In the case of oil palm 75% control obtained with this plant using glyphosate and dicamba, whereas only 25% control obtained using paraquat and diuron. In the Philippines, this weed was controlled in Vigna radiata by an application of bentazon.

In case of Glycine max control was achieved with oxadiazon, but this specific herbicide highly injured the crop. Pamplona (1981) successfully used glyphosate and glufosinate to achieve control within 30 days in stands of two-year-old rubber plants. Some other control occurred with the applications of atrazine, cyanazine and 2, 4-D and MCPA for this weed in maize crops in Philippines 40, 41, 42.

Anti-convulsant Activity: It could be concluded that the plant Cleome rutidosperma having anti-convulsant activity and better result is obtaining from an extract of diethyl ether. The extract used for this purposes was ethanol, petroleum ether, ethyl acetate, and n-butanol also. A detail research investigation is necessary to determine the phytochemical constituents present in the crude extracts of this herb which claims to produce the anti-convulsant activity 45.

Wound Healing Property: Methanolic and aqueous extract of Cleome rutidosperma roots were found to possess better wound-healing property over other extracts which was used in the research study 47.

Immune Boosting or Synergism with Costus afer: Research study showed the effect of combined ethanol extract (leaves) of Costus afer and Cleome rutidosperma on hematological and serum lipid parameters. The study showed the combined leaf extract might be used in boosting the immune system and effects on serum cholesterol concentration also observed 55.

The review cited the various uses, morphological, taxonomical and other important biological or biochemical aspects of Cleome rutidosperma DC. The review found the loopholes or lacunae for future work.