Categories Menu
Home » NATURE AND CAUSE OF TAKING PSYCHOTROPIC DRUGS: A CROSS-SECTIONAL HEALTH SURVEY IN NORTHERN REGIONS OF BANGLADESH

NATURE AND CAUSE OF TAKING PSYCHOTROPIC DRUGS: A CROSS-SECTIONAL HEALTH SURVEY IN NORTHERN REGIONS OF BANGLADESH

NATURE AND CAUSE OF TAKING PSYCHOTROPIC DRUGS: A CROSS-SECTIONAL HEALTH SURVEY IN NORTHERN REGIONS OF BANGLADESH

INTRODUCTION: The making and taking of psychotropic drugs, whether on medical prescription or as self-medication, whether marketed by pharmaceutical companies or clamored for by an anxious population, has been an integral part of the twentieth century 1 - 2. In this modern era of speed, uncertainty, pleasure and anguish the boundaries between healing and enhancing the mind by chemical means have been redefined once and again 3 - 4.

The idea and practice of taking psychotropic’s not to treat a mental illness but to make them feel better about living in a modern world. Insufficiently vigorous pursuit of pleasure and material reward due to an inability to cope with a speedy and tense society was recognized as a medical problem 5. As a treatment for this condition a combination of dexamphetamine and amylobarbitone became extremely popular in America, Britain and the Netherlands 6.

Not only in psychiatric practice but within medicine as a whole, synthetic drugs like chloral hydrate and subsequently the barbiturates became widely used, in dealing with common symptoms from insomnia to anxiety and the vapors 2, 7 - 8. The relative high pricing of the barbiturates did not prevent them from becoming the most popular hypnotics and sedatives of the first half of the twentieth century. This was not only due to the successful efforts of the pharmaceutical industry to project a modern scientific image on the barbiturates but also to due to the dependency of those drugs.

Deaths resulting from illicit drugs use, most of which are premature and preventable, are clearly the most extreme manifestation of the harm that can result from the illicit use of drugs. Definitions and methods of recording drug related deaths vary by country but comprise some or all of the following: unintentional overdose, suicide, AIDS acquired through the sharing of contaminated drug paraphernalia and trauma (such as motor vehicle accidents caused by driving under the influence of illicit drugs) 20. Approximately 1 in every 20 deaths among persons aged 15 - 64, is drug-related deaths, in North America and Oceania. In Asia, they account for approximately 1 in 100 deaths, in Europe 1 in 110, in Africa 1 in 150 and in South America approximately 1 in every 200 deaths 21.

Mental health expenditures from government health department are very insignificant and are less than 0.5% in Bangladesh. Of all the expenditures spent on mental health, 67% are devoted to mental hospital. There are 31 community-based psychiatric inpatient units available in Bangladesh, for a total of 0.58 beds per 100,000 populations. The total number of human resources working in mental health facilities or private practice per 100,000 populations is 0.49 in Bangladesh 22. In terms of support for child and adolescent health, no primary and secondary school has either a part-time or full-time mental health professional or no primary and secondary school has school-based activities to promote mental health and prevent mental disorders. At present many students are taking psychotropic drugs such as sedative and anti-anxiolytic drugs during their examination to remove tension.

Setting and Design: This cross-sectional health survey was carried out with a self-designed standard questionnaire by directly interviewing the 615 patients. Six districts of Rajshahi division were selected for collecting the data for over nine month’s period from May, 2015 to January, 2016. Rajshahi is located in the north-west of Bangladesh Fig. 1 and the divisional headquarters of Rajshahi Division as well as the administrative district, having an estimated population of 2,595,197. Its total area is 2,407.01 km2 (929.35 sq mi) and is situated on the northern banks of the river Padma 23. 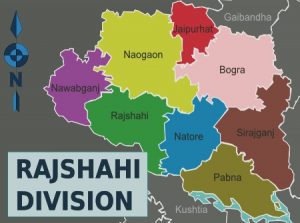 Sirajganj is the gateway to the North Bengal, and it has area of 2,497.95 km2 (964.46 sq mi) and total population is 3,097,489. It is bordered on the north by Bogra District and Natore District; on the west by Natore District and Pabna District; on the south by Pabna District and Manikganj District; on the east Manikganj District, Tangail District and Jamalpur District 27. Chapai Nawabganj is located on the north-western part of Bangladesh. The north and west part of Chapai Nawabganj is bounded by Malda and Nadia of India, east is by Naogaon and south-east is by Rajshahi district. It has total area of 1,702.55 km2 (657.36 sq mi) and population of 1,647,521 28. In this health survey, any patient who was prescribed one or more psychotropic drugs at any stage during this study is included in this survey.

The main objectives of the research was to find out the prevalence of taking psychotropic drug and identify the major psychiatric disease, determine the age and gender that are most vulnerable of taking this types of drugs, determine the relationship between psychosis with smocking, alcoholism, food habits, internet using / computer usage and to identify whether any relationship exist between psychosis with suicide and effects of parents or family relationship on a person.

Data Collection: Data were collected from the patients by random selecting the patients from hospital, pharmacies and by home visit. The data collectors were waiting in front of the pharmacy shop, or medical college and convince the patients who are possessing psychotropic medication in their prescription to produce their prescription data to the interviewers as well as participated in the interview session. The language of the questionnaire was English which is translated to Bengali language by the data collectors to the participants whom mother tongue is Bengali language. The Bengali answers given by the respondents translated to the English languages in the same way by the data collectors. Written consent was taken from each patient during this study. Few questionnaires were excluded during the data analysis because of insufficient information.

Patient Characteristics: During the 9 months period, 615 patients of psychosis were questioned in Rajshahi Division, Bangladesh. Baseline characteristics of the patients are presented in Table 1. The study included 224 female and 391 male patients. The majority patient with age is 15 -34 years. The duration of taking psychotropic drug varies usually 2 - 3 days to 6 years but there are some patients who take psychotic drugs more than 6 years. Most of the patients are moderate user with 2 weeks to 2 month is their duration.

Patient’s Lifestyle: Usually students are the potent customer of taking psychotropic drug but lonely housewives are also suffering psychosis. The most common cause to being a psychiatric patient is tragedy, anxiety, depression, sleep disorder and recovery from pain Table 2. The sleeping time and computer usages does not gives any indicator of being psychosis.

Patient’s Food Habit: The patients are likely to take all types of food but meat is more preferable Fig. 2. The patient does not show direct correlation with coffee, tea or alcohol Fig. 3. About 30 - 40% of patients are smoker Fig. 4 and also involved in addiction to narcotics Fig. 5. 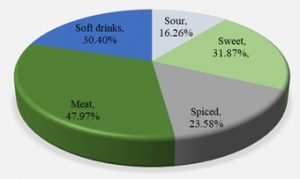 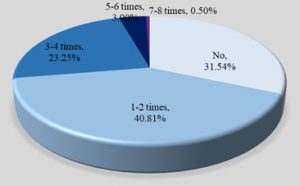 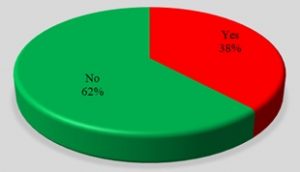 Social Factor: A large number of patients are taking this type of drug without the concern of physician and only one third of the patients who are going to the doctor gets a good counselling Table 3. About one fourth of the patient lives in a family where a friendly family environment is not exist and about half of the patients are not getting mental support from their family members. 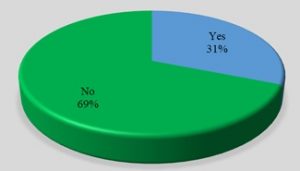 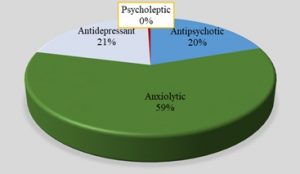 DISCUSSION: To our knowledge, this survey represents the first psychotropic study report in the Bangladeshi population which directly relates psychosis with occupation, character, sleeping, food habit, and family relationship. The study involved a total number of 615 patients who are taking psychotropic drugs and native of Rajshahi division of Bangladesh. Our study group comprised of 63.58% male and 36.42% female of which 45.65% are student, 19.02% housewife, 13.33% service holder, and other profession such as agrarian, businessman, unemployed and workers are also exist.

The patients are also taking psychotropic medicine due to various medical abnormality such as allergy, angina, ischemic shock, palpitation, and vertigo. Gastric problem like nausea, vomiting and anorexia is also cause of taking psychotic drugs. Duration of psychiatric therapy consists of less than 1 week to more than 6 years. Most of the patients are taking drugs 1 - 3 months 23.58% followed by 2 weeks to 1 month 18.05%.

The majority of the patients were managed by anxiolytic drug (59.02%), antipsychotic drug (19.84%), antidepressant drug (20.65%) and psycholeptic drugs (0.49%). Similar results was published in previous study, where antipsychotic drug use lies between 18 - 23% and antidepressant use between 21 - 51% 29 - 32. The higher rate of use of anxiolytic drug in this study is mainly due to tension, anxiety and sleep disorder.

More than one-third (35.77%) of the patients are taking this type of drug without the concern of physician which might cause various side effects such as dependence or accidently over dose may cause serious toxicity or even death. The patients who are going to doctor does not even get sufficient counselling, only 210 of 395 patients (about 46%) who are going to doctor gets sufficient counselling. Family is a very potent source of mental satisfaction and can provide mental support to a person in stressed conditions. About one-fourth of the patients family, there is not friendly family relationship exist. In almost three-fourth of the patients (74.96%), guardians are aware about their family member’s psychiatric problem but only 321 of 461 patients (69.63%) gets sufficient counselling from their guardians.

Our study has several limitations, such as, the data presented here is based on retrospective analysis. Secondly, the number of patients was relatively small. And lastly the study was conducted for only Northern regions of Bangladesh, which may vary from the results of other parts of the country.

ETHICAL CONSIDERATIONS: The study was conducted following the general principles (section 12) of WMA declaration of Helsinki. This survey based research is also logistically supported by the Department of Pharmacy, Varendra University, Rajshahi. The human subjects involved in this study did not use any hazardous agents and samples were not collected from them. As the human subjects only participated in the interview, this survey based research didn’t take any further approval from institutional ethics committee.

ACKNOWLEDGEMENT: The author is likely to give thanks to the students of the Pharmacy Department, Varendra University, Rajshahi.

COMPETING INTEREST: The research was conducted in the absence of any commercial or financial relationships that could be construed as a potential conflict of interest. The authors declare that they have no competing interests.