ABSTRACT: Diabetes mellitus is a metabolic condition characterized by insulin resistance, or poor secretion, or both. There are several side effects associated with drugs available to cure diabetes. The most common side effect is neurodegenerative. The objective of the present research was to evaluate the efficacy of Cuminum cyminum seed against diabetes and also to evaluate its nephroprotective power in the diabetes mice model. Twelve mice were housed, caged, and segregated into three groups for 28 days (four weeks). Control, diabetic control, and diabetic with Cuminium seed treatment. The diabetic mice model was prepared by a single dose of alloxan (110 mg/kg/bw) introduced intraperitoneally. Glucose monitoring and diabetic condition checked and confirmed by a one-touch glucometer. Alcoholic extract of Cuminum cyminium seed (80mg/kg/ body weight) orally administrated to the diabetic group of mice up to 28 days. After the completion of the whole experiment, animals were sacrificed blood samples were collected for the investigation of biochemical parameters, including glucose, urea, uric acid, and creatinine. There were the least changes observed in the control group of mice. But in the diabetic control group value of glucose, urea, uric acid, and creatinine were very high (p<0.0001). After the treatment with ECSE (ethanolic cumin seed extract), a significant reduction was observed in all the above parameters. This study may be concluded that Cuminium cyminium seed has antidiabetic as well as nephroprotective potential.

INTRODUCTION: Diabetes describes a metabolic disorder of multiple etiology characterized by chronic hyperglycemia with disturbance of carbohydrates, fats and protein metabolism resulting from defects in insulin secretion and insulin action or both 1.

The International Diabetes Federations estimated that 1 in 11 adults aged 20-79 years (415 million adults) had diabetes globally in 2015. This estimate is expected to rise to 642 million by 2040 2, 3, 4  as per the National Diabetes Statistics Report, 2017 of USA,9.3% of people were India is home to 69.1 million people with DM. It is estimated to have the second-highest number of cases of DM in the world after China in 2015. The prevalence of DM in India ranges from 5–17%, with higher levels found in the southern part of the country and urban areas. Diabetes is growing alarmingly in India, with more than 65 million people having the disease, compared to 51 million in 2010 5, 6.

At present, only insulin and oral antihyperglycemic drugs are available for diabetes management 7. Although the currently available drugs are useful in controlling early-onset problems of diabetes, serious late-onset complications appear in a large number of patients 8. Considering the physiopathology of diabetes, avoiding beta-cell degeneration and stimulating the endogenous regeneration of islets will be important approaches in the treatment of diabetes. Phytochemicals have always been an important source of remedies for human health complications. Diabetic nephropathy (DN) is structural abnormalities revealing hypertrophy of both glomerular and tubular elements; increase in the thickness of glomerular basement membranes, progressive accumulation of extracellular matrix components, an early increase in the glomerular filtration rate with intraglomerular hypertension, subsequent proteinuria, systemic hypertension and eventual loss of renal function 9.

Numerous experimental and clinical studies have documented the beneficial effects of phytotherapy for managing diabetes 10. Antidiabetic effects of phytochemicals are referred through different mechanisms such as decreasing glucose absorption from the intestine, promote glycolysis, increasing glucose uptake by tissues, enhancing insulin secretion from beta cells, and regeneration of beta-cells 11, 12, 13, 14, 15. Medicinal plants have increased wide attention from researchers and have been considered to be a useful adjuvant agent to oral antidiabetic drugs because of their combined effects 16. There are about 200 pure compounds from plant sources reported showing blood-glucose-lowering activity. The compounds may be flavonoids, terpenoids, alkaloids, carbohydrates, glycosides, steroids, peptides, amino acids, lipids, phenolics and glycopeptides 17. The mechanisms of medicinal plants for glucose control in diabetes include the inhibition of glucose absorption, enhancement of insulin sensitivity, protection of β-cell injury, an increase of insulin release, improvement of antioxidant defense, attenuation of inflammation, modulation of carbohydrate metabolism pathway and regulation of insulin-dependent and insulin-independent signaling pathways 17.

Cumin (Cuminum cyminum), a small, annual herbaceous plant of the apiaceae family. It is a popular spice all over the world, especially in the east Mediterranean to east India 18. It has known to the Egyptians 5,000 years ago and formed an important medicine of ancient Egypt.19In traditional medicine; cumin was used to treat hoarseness, jaundice, dyspepsia, and diarrhea. It is also used in the treatment of stomachic, diuretic, carminative, stimulant, astringent, and abortifacient properties 20, 21. It includes a plentiful amount of fat, mainly monosaturated fat, dietary, and fiber protein. It is a great source of Vitamins B and E and some dietary minerals, particularly iron 22. Terpenoids, cumin aldehyde, and cymene are the major volatile components present in cumin 23. Cuminaldehyde derived from cumin seed preserves aldose reductase and α-glucosidase inhibitory activities 24 and antioxidant properties 25. Therefore, this study aims to investigate the nephroprotective property of Cuminum cyminum in alloxan-induced diabetic mice.

MATERIALS AND METHODS: The healthy mice (Mus musculus) were brought up in the animal house in the age group of 12 weeks old with 30±5 gm body weight. The mice were kept at standard environmental conditions 20±2 ºC, relative humidity 50±10%, and 12h dark-light cycle. All animals used in the investigation were supplied with food and water ad libitum. All experiments were conducted following the guideline of CPCSEA (Committee for the Purpose of Control and Supervision of Experiments on Animals; CPCSEA Reg-No.1129/bc/07/CPCSEA)

Chemicals: Alloxan, manufactured by Loba Chem Pvt. Ltd., Mumbai, was utilized for the experimental design. It is used to make a diabetic model in the experimental animal. It dissolved in 10 ml distilled water. It was injected intraperitoneally 110 mg/kg/body weight/day to overnight (12h) fasted mice. After the injection, animals had allowed food and water ad libitum. Mice were allowed to stabilize for three days and blood samples were collected from the tail to estimation of blood glucose levels. The prevalence of the diabetic model was analyzed after 2 weeks before starting the treatment. The medicinal plant used: cumin seeds were washed, cut into small sizes, dried in the incubator at 37 ºC for 20 days and ground into powder. The powder was macerated in absolute ethanol and left standing for 72 h.  It was then dried into rotary evaporators at 60 ºC and 300 psi.  The obtained residue was then stored in an airtight bottle. A fresh solution was prepared from this stock by dissolving 80mg moringa powder in 5% ethanol. Alcoholic extract of Moringa oleifera was administered orally (150 mg/kg/bw/day) to the diabetic group of mice.

Study Design: Twelve adult male laboratory mice belonging to the Swiss Albino strain were employed in the study. They were 12 weeks old and weighed 30 to 35 gm at the beginning of the investigations. Animals were reared in the animal house of Mahavir Cancer Sans than & Research Institute, Patna, under strict hygienic conditions in well-ventilated rooms at 23 ± 2 ºC and 50 ± 10% relative humidity with a 12 h photoperiod. They were maintained on the laboratory-prepared food, including multigrain bread, soaked grams, green vegetables, and drinking water ad libitum. Mice were divided into three groups, each comprising four animals. Each group was housed in separate polypropylene cages (26 x 19 x 13 cm) and treated as follows: The animal included in the experiment was divided into four groups with three animals, summarized in Table 1.

Mice were sacrificed by dislocation of cervical vertebrae. Animals in groups I, II and III were sacrificed 28 days after the termination of the last dose. Tissue was removed and fixed in 10% formalin for the light microscopy study. Serum was collected for glucose, urea, and uric acid.

Induction of Diabetes: Diabetes was introduced by alloxan, purchased from Lobachem Pvt. Ltd., Mumbai. Fifteen mice, fasted overnight, were injected alloxan intraperitoneally 110 mg/kg body weight, only once. Each mouse was weighed separately, and the dose of alloxan was adjusted accordingly.

Only after injecting alloxan, were mice allowed access to the food and water ad libitum. Confirmation of diabetes was made 72 h after alloxan treatment by testing their fasting blood glucose level. Mice having a blood serum glucose level of 200 mg/dl or more were confirmed as diabetic mice. Estimation of blood glucose level was made by one-touch glucometer Infobia Co. Ltd., Korea.

Biochemical Assay: Mice were sacrificed by dislocation of the cervical vertebrae. Blood was collected from the orbital puncture. The serum was separated by centrifugation at 3000 rpm for 15 minutes. Assessment of glucose spectrophoto-metrically through GOD/POD method (Coral Clinical System).  All experiments were conducted as per the guidelines of CPCSEA (Committee for Control and Supervision of Experiments on Animals).

Effects of ECSE on Fasting Serum Glucose Level in Experimental Mice: The glucose level in diabetic mice increased significantly (p<0.0001) as compared to the control group of mice.

However, after the administration of ethanolic extract of cumin seeds for 28 days glucose level significantly (p<0.0001) decreased as compared to the diabetic group Fig. 1 and Table 2. 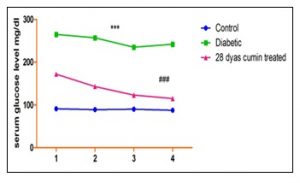 Effects on Serum Urea Level in Experimental Mice: The level of urea significantly increased in the diabetic group of mice. 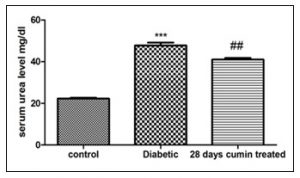 Effect of Uric Acid in Experimental Animals: After the alloxan administration in mice the uric acid level was significantly (p<0.0001) increased compared to the normal group of mice.

However, ethanolic extract of cumin significantly (p<0.0001) reduces the serum uric acid level as compared to the diabetic group Fig. 3 and Table 2. 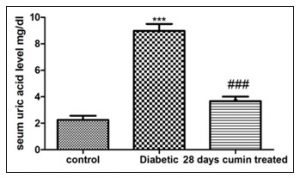 Effects on Serum Creatinine Level in Experiment Model: The levels of serum creatinine significantly (p<0.001) increased in the diabetic group of mice.

However, ethanolic extract of cumin (p<0.05) reduces the creatinine level as compared to the diabetic groups Fig. 4 Table 2. 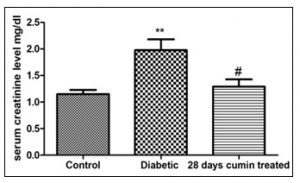 DISCUSSION: In the present study, the antidiabetic, and nephroprotective effect of ethanolic extract of cumin on alloxan-induced diabetic mice. Since alloxan selectively destroyed the β-cells by the generation of free radicals 26, the present investigation also shows blood glucose level significantly elevated in alloxan-induced diabetic mice due to oxidatively damaged of β-cells as compared to normal control. Durašević (2019) also observed the same pattern in their study 27.

These amplified levels may be due to NH3, which is changed into urea and detoxified. Urea is produced in the liver and is transported into the blood to the kidney then finally excreted in the urine continuously; whenever the kidney fails to maintain NH3 then it becomes high blood glucose level and renal failure 30 whereas after the treatment of diabetic mice with ethanolic extract of cumin for 28 days it moderately reduces the level of urea but highly significant reduction in uric acid and the creatinine level also effectively reduces in diabetic mice. Khurana et al. (2019) also found that cumin has nephroprotective properties against streptozotocin-induced diabetic rats 25. Another study reported that Cuminum cyminum effectively reduces the kidney marker enzyme in Chlorpyrifos exposed mice 31. Apart from medicinal properties, Cuminum cyminum seed has multi-nutraceutical effects 32.

CONCLUSION: Thus, from the entire study, we can conclude that cumin significantly reduced the elevated glucose level and maintained kidney function. It has antihyperglycemic and nephroprotective potential. Therefore, it can be developed into antihyperglycemic drugs, which will safely manage the blood glucose level without disturbance of any other parts and their functions.

ACKNOWLEDGEMENT: The authors extended their appreciation to Mahavir Cancer Institute & Research Centre, Patna, Bihar, India, for providing an animal experimentation facility and another infrastructure facility. This study does not have any financial support from any funding agency from India or abroad.

CONFLICTS OF INTEREST: The authors declare that they have no conflict of interest concerning this article.