ABSTRACT: Cognitive functions are mainly categorized into memory, attention, creativity, and intelligence. Cognitive enhancement may be defined as the amplification or extension of core capacities of the mind. Phenylethylamine is an organic compound which is also known as β-phenylethylamine (β-PEA) and is the name of a class of chemicals which shows psychoactive and stimulant effects. It is a trace amine and a natural monoamine alkaloid. PEA plays an important role in weight loss, treating depression, ADHD and Alzheimer’s disease, etc. The main objective of this study is to synthesize derivatives of ethylamine and phenyl-ethylamine, which may inhibit MAO receptors and improve cognitive behavior. All synthesized derivatives were studied for their biological evaluation on the brain, and they showed the good neurological activity and found effective to reverse the memory deficits induced by scopolamine. While, there is no significant effect was seen in the locomotor effect, which represent that these agents are effective to control the motor coordination.

INTRODUCTION: Cognition is the physiological process of knowing, including awareness, perception, reasoning, and judgment. The enhancement aspects of cognition, such as learning and memory, now seem possible for people with the normal age-related decline and in healthy people, although so far the effects of these cognition enhancers are modest 1. Many different strategies are proposed to enhance cognition like environmental enrichment and exercise, nutrients, herbal medicines, pharmaceutical drugs, advanced techniques, and medical devices.

There are three classes of drugs with cognitive enhancement potential 2 stimulants, acetylcholi-nesterase inhibitors, and modafinil. Phenyl-ethylamine is an endogenous neuroamine that has been linked to the regulation of physical energy, mood, and attention. Monoamine oxidase B selectively metabolizes phenylethylamine to phenylacetic acid. There is evidence to indicate that levels of phenylethylamine and phenylacetic acid are very low in the biological fluids of depressed patients 3. PEA is different from its structural relative, amphetamine, by the lack of a methyl group 4, 5. Phenylethylamine deficiency can be responsible for depression 6. Depression can be relieved by Phenylethylamine, even in those that were unresponsive to standard treatments 7, 8. Exercise increases PEA production, which may be one of the reasons for the antidepressant effect of exercise 9. PEA is reported to reduce appetite 10.

PEA levels are less in ADHD individuals 11, 12. The present study was undertaken with the objective of synthesizing phenylethylamine and ethylamine derivatives, which may inhibit MAO receptors and improve cognitive behavior.

The mixture was cooled; the solid was separated by filtration and recrystallized from methanol. The purity of the compound was checked by single spot TLC Fig. 1. 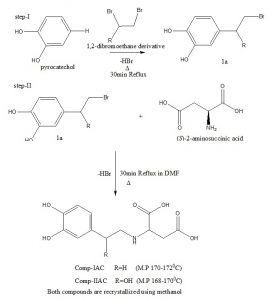 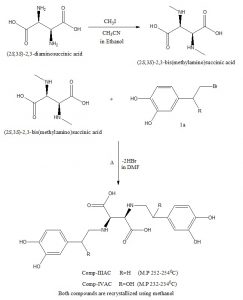 Evaluation of Synthesized Compounds on Brain (Memory) Animals: Swiss mice of male sex weighing 20-25 g were used in the present study. They had free access to food and water and were maintained under standard laboratory conditions with alternating light and dark cycles of 12 h each. They were acclimatized to laboratory conditions for 2 days before behavioral studies. The Institution Animals Ethics Committee (IAEC) had approved the experimental protocol, and care of animals was taken as per guidelines of CPCSEA, Department of Animal Welfare, and Government of India.

Passive Avoidance Task: Passive avoidance behavior was used to examine the long term memory. Each mouse was gently placed on the wooden platform set in the center of the grid floor. When the mouse stepped down and placed all its paws on the grid floor, shocks were delivered for 15 sec, and the step-down latency (SDL) was recorded. Animals showing SDL in the range (2-15 sec) during the first test were used for the second session and the retention test. The second session was carried out 90 min after the first test. When the animals stepped down before 60 sec, electric shocks were delivered for 15 sec. During the second test, animals were removed from the shock free zone if they did not step down for a period of 60 sec. Retention was tested after 24 h in a similar manner, except that the electric shocks were not applied to the grid floor. Each mouse was again placed on the platform, and the SDL was recorded, with an upper cut-off time of 300 sec 13, 14.

Morris Water Maze: MWM consisted of a circular pool (150 cm in diameter, 45 cm in height) filled to a depth of 30 cm with water maintained at 25 °C. The water was made opaque with non-toxic white-colored dye. The tank was divided into four equal quadrants with the help of two threads, fixed at a right angle to each other on the rim of the pool. A submerged platform (10 cm2), painted in white, was placed inside the target quadrants (Q4 in the present study) of this pool 1 cm below the surface of the water. The position of the platform was kept unaltered throughout the training session. Each animal was subjected to four consecutive trials each day with a gap of 5 min for four consecutive days, during which they were allowed to escape on to the hidden platform and to remain there for 20 sec. If the mouse failed to find the platform within 120 sec, it was guided gently onto the platform and allowed to remain there for 20 sec. ELT was noted as an index of learning. Each animal was subjected to training trials for four consecutive days; the starting position of the animal was changed with each exposure, as mentioned below, and the target quadrant. On the fifth day, the platform was removed. The mouse was placed in the water maze and allowed to explore the maze for 120 sec. Each mouse was subjected to four such trials, and each trial was started from a different quadrant. Time spent in all three quadrants, that is, Q1, Q2, and Q3 were recorded and the time spent in the target quadrant (TSTQ) in search of the missing platform provided as an index of retrieval 15.

Evaluation of Locomotor Function: Locomotor activity of control and drug-treated animals was measured with the help of a photoactometer (INCO, Ambala, India).

Collection of Brain Samples: The animals were sacrificed by cervical decapitation under light anesthesia on the 10th day 90 min after administration of the last doses of synthesized derivatives or standard drugs or vehicle. Then, the whole-brain was carefully removed from the skull. The whole fresh brain was weighed and transferred to a glass homogenizer and homogenized in an ice bath after adding 10 volumes of sterile normal saline injection. The homogenate was centrifuged at 3000 rpm for 10 min, and the resultant cloudy supernatant liquid was used for biochemical estimations.

Estimation of Thiobarbituric Acid Reactive Substances Level: Thiobarbituric acid reactive substances (TBARS), a measure of lipid peroxi-dation, was estimated spectrophotometrically. Brain tissues were homogenized with 10 times (w/v) 0.1 M sodium phosphate buffer (pH 7.4). The reagents, acetic acid 1.5 ml (20%), 1.5 ml thiobarbituric acid (0.8%), and 0.2 ml sodium Lauryl sulphate (8.1%) were added to 0.2 ml of the processed tissue sample. The mixture was made up to 4.0 ml with distilled water and heated at 1000 °C for 60 min. The mixture was cooled under tap water and 5 ml of n-butanol: pyridine (15:1% v/v), 1 ml of distilled water was added, and shaken vigorously.

After centrifugation at 4000 rpm for 10 min, the organic layer was withdrawn, and absorbance was measured at 532 nm using a UV-Visible Spectrophotometer. The results are expressed as µmol/g of tissue protein 18.

Estimation of Brain Glutathione Levels: Glutathione was measured spectrophotometrically. Briefly, brain tissues were homogenized with 10 times (w/v) 0.1 M sodium phosphate buffer (pH 7.4). This homogenate was then centrifuged with 5% trichloroacetic acid to centrifuge out the proteins. To 0.1 ml of this supernatant, 2 ml of phosphate buffer (pH 8.4), 0.5 ml of 5, 5’-dithiobis (2- nitrobenzoic acid) (DTNB) and 0.4 ml of double-distilled water was added. The mixture was vortexed and the absorbance measured at 412 nm within 15 min. The results are expressed as µmol/g of tissue protein 19.

Effect of Synthesized Derivatives on Locomotor Activity: Locomotor activity was assessed to screen the effect of test drugs on motor coordination. There was no significant change found in the locomotor activity.

DISCUSSION: In the present study, four compounds were synthesized and studied its effect on the brain. Scopolamine is used to induce memory loss in laboratory animals. Donepezil, a memory-enhancing agent is used as a standard drug in the present study. Synthesized compounds were effective in reversing the memory deficits induced by scopolamine by increasing the step-down latency in the passive avoidance paradigm and by enhancing the time period in the target quadrant to reflect better spatial memory of mice in morris water maze. While, there is no significant effect was seen in the locomotor effect, which represent that these agents are effective to control the motor coordination. Cognitive functions are thought to be regulated by acetylcholine, which is an important neurotransmitter. In the present study, synthesized compounds produced significant inhibition of AChE activity. AChE is an enzyme, which terminates the action of Ach by degrading Ach into Acetyl CoA and choline. Synthesized compounds inhibited the AChE activity leading to increased accumulation of Ach at the synapse and facilitation of cholinergic transmission. TBARS is one of several products of damage produced by oxidative stress.

Oxidative stress plays an important role in the pathogenesis of neurodegenerative disorders like Alzheimer's disease, Parkinsonism disease, apoptosis, etc. Thus, an increase in TBARS or MDA levels corresponds to increase oxidative stress leading to brain damage, and a decrease in their level reflects neuroprotection. In the present study, all the synthesized compounds reduced the TBARS levels, ultimately providing a neuroprotective. GSH (Glutathione) is a major endogenous antioxidant produced by the cells. It prevents damage to important cellular components by participating directly in the neutralization of free radicals and reactive oxygen compounds. Thus, Glutathione (GSH) is the major free radical scavenger in the brain. An increase in its level indicates neuro-protection.

CONCLUSION: Synthesized compounds showed good neurological activity and found effective to reverse the memory deficits induced by scopolamine. While, there is no significant effect was seen in the locomotor effect, which represent that these agents are effective to control the motor coordination.

ACKNOWLEDGEMENT: The authors are thankful to I.K. Gujral Punjab Technical University, Jalandhar (Punjab), for their support and encouragement for this research work.