ABSTRACT: Streptozotocin (STZ) induced neurotoxicity causes development of diabetic neuropathy in rodent models and oxidative stress is the main culprit in development of diabetic neuropathy. In the present study we aimed to evaluate the neuroprotective and antioxidant role of Pregabalin in STZ induced neurotoxicity. After 8 weeks, STZ induced diabetic rats showed sciatic nerve damage which was evident from hyperalgesia, allodynia, motor deficits and Transmission Electron Microscopic studies of sciatic nerves. Pregabalin treatment at a daily dose of 15 mg/kg for 7 weeks ameliorated hyperalgesia, allodynia, motor deficits and prevented the structural abnormalities in sciatic nerves of diabetic rats. STZ neurotoxicity reduced antioxidant enzyme levels in sciatic nerves. Pregabalin treatment significantly ameliorated the decrease in antioxidant defence in diabetic rats. These results demonstrated neuroprotective effect of Pregabalin, which is mediated through attenuation of oxidative stress. The antioxidant mediated neuroprotective role along with its analgesic activity can prove it as a better option in prevention and treatment of Diabetic neuropathy.

INTRODUCTION: Streptozotocin is a diabetogenic DNA alkylating or methylating agent which is normally used as an experimental model of type 1 diabetes in rodents. It contains a glucose molecule (in deoxy form) that is linked to a highly reactive methyl nitrosourea moiety  that is thought to exert STZ’s cytotoxic effects, while the glucose moiety directs the chemical to the pancreatic β cells.STZ recognizes the GLUT2 receptor that is abundant on β cell plasma membranes.

Therefore, pancreatic β cell is a specific target of STZ 1. Chronic hyperglycemia and the corresponding glucotoxicity are the main pathogenic mechanisms of diabetes and its complications. Glucose toxicity derives from the interplay of several metabolic reactions. Induction of oxidative stress is critical; both in terms of its effect on cellular function per se and in terms of the generation of more reactive molecules from glucose.

These molecules then combine with cellular and extracellular macromolecules, altering their functional properties and causing downstream adverse effects on cell function. Subsequent changes in cellular phenotype give rise to diminished neurotrophic support, disturbed excitability and impulse conduction and the generation of painful states, such as allodynia and hyperalgesia. In the longer term, Schwann-cell death and axonal degeneration lead to complete functional breakdown. In diabetic neuropathy this causes loss of protective sensation in the extremities and leads to insensible trauma, which with poor wound healing can make amputation necessary 2.

Pregabalin is a first line agent for the treatment of pain associated with diabetic neuropathy, post-herpetic neuralgia, and central neuropathic pain 3. It binds to the α2δ (alpha-2-delta) subunit of the voltage-dependent calcium channel in the central nervous system providing an anti-hyperalgesic and anti-allodynic effect specific for its action at the CaVα2δ-1 subunit 4. But there is no evidence of its role in preventing progression of nerve damage in STZ induced neurotoxicity. So the present study was designed to evaluate the anti oxidant and neuroprotective role of Pregabalin in STZ induced neurotoxicity.

Age matched young male Albino Wistar rats weighing about 180-220 g were employed in the present study and were procured from Albino Research and Training Institute, Hyderabad. They were fed on a standard chow diet and water ad libitum. All the animal experiments were carried out as per the guidelines of the Committee for the Purpose of Control and Supervision of Experiments on Animals, Ministry of Environment and Forest, Government of India. The experimental protocol has been approved by the IAEC Reg. No 1722/RO/Ere/S/13/CPCSEA.

Diabetes was experimentally induced in adult rats by administering a single intravenous dose of 50 mg/kg STZ. Control animals received an equal volume of citrate buffer. STZ induced Diabetic animals were given 10 % (w/v) glucose in drinking water for 24 h. The animals showing plasma glucose levels more than 300 mg/dl after 72 h of STZ injection were considered Diabetic and included in the study.

Animals were randomly divided into three groups having eight animals each: Control, Diabetic and diabetic + Pregabalin (Preg 15) treated groups. One week after STZ administration, Pregabalin was administered to the diabetic group orally at a daily dose of 15 mg/kg body weight. Pregabalin was dissolved in drinking water and administered through gastric gavage.

Thermal hyperalgesia was assessed by Eddy’s hot plate. The temperature of the hot plate should be maintained at 550 C+10C throughout the experimental period.  The latency to first sign of paw licking or jumping response to avoid thermal pain was taken as an index of pain threshold. A cut off time of 15 Sec was maintained 5.

Assessment of cold and hot allodynia by tail immersion method:

The tail of each rat was immersed in cold (100C) or warm (480C) water and tail flick latency was recorded until tail withdrawal or signs of struggle were observed (cut off time 15 sec) 6, 7.

The Rota rod treadmill test was done to evaluate motor in coordination of the animals 8. The rats were tested for three times at 25 RPM speed with an interval of 20 min between each trial. An average of three readings was taken as the final latency to fall 9.

All animals were sacrificed at the end of the study by decapitation under light ether anesthesia and both the sciatic nerves were immediately isolated carefully and weighed. The sciatic nerve homogenate (10%) was prepared with 0.25 M Tris buffer using Potter-Elvehjam type glass homogenizer. The homogenate was centrifuged at a temperature of 40 C at 4000 RPM for 10 minutes. The pellet was discarded and a portion of the supernatant was again centrifuged at 10000 RPM for 20 minutes to get post mitochondrial supernatant. Various biochemical assays were performed in homogenate and post mitochondrial fraction 10.

The acid soluble sulfhydryl groups form a yellow colored complex with dithionitrobenzene (DTNB). The absorbance was measured at 412 nm against a blank contained TCA instead of supernatant. The amount of glutathione is expressed as n.mole/mg protein 11.

The assay of SOD is based on the inhibition of the formation of NADH-phenazine methosulphate-nitroblue tetrazolium formazon. The colour formed at the end of the reaction can be extracted into butanol layer upon inactivation of the reaction with acetic acid and measured at 560 nm. The SOD level was expressed as Units/mg protein 12.

H2O2 decomposition by CAT (Catalase) was monitored spectrophotometrically by following decrease in absorbance at 240 nm at an interval of 30Sec.Catalase was expressed as µmoles of H2O2 metabolized/mg protein /min 13.

Thiobarbituric acid reacts with malondialdehyde to yield fluorescent product. The amount of the tissue Melondealdehyde (MDA), product of lipidperoxidation formed was measured with Thiobarbituric acid at 532 nm. The results were expressed as n mol/mg protein 14.

The protein content was estimated according to the method of Lowry et al. using albumin as standard 15.

Samples are fixed in 2.5% - 3% glutaraldehyde in 1 M phosphate buffer (pH 7. 2) for 24 hours at 40c and washed with PBS for 3-4 times each 30-45 minutes, then post fixed in 1% aqueous Osmium Tetroxide for 2 hours later washed with deionized distilled water for 4-6 times each 40-45 minutes, dehydrated in series of graded alcohols, infiltrated and embedded in araldite 6005 resin and incubated. Ultra-thin (50-70 nm) sections were made and counter stained with Reynolds lead citrate (LC) and viewed under a Transmission Electron Microscope 16.

All values were expressed as Mean ± SEM (n = 8/group). Data was analyzed using one way analysis of variance (ANOVA) followed by Tukey-Kramer test for multiple pair wise comparisons between the various treated groups. Values with P < 0.05 or less were considered as statistically signiﬁcant.

Effect of Pregabalin on thermal hyperalgesia and allodynia:

TABLE 2: EFFECT OF PREGABALIN ON HOT AND COLD ALLODYNIA

Effect of Pregabalin on motor coordination and locomotor activity:

Effect of Pregabalin on motor deficits was shown in Table 3. Rotarod treadmill test revealed a marked impairment in motor coordination of the diabetic animals. There was a significant reduction in the retention time of the diabetic animals compared to the normal control rats on the rotating rod after 8 weeks of diabetes. Treatment with 15 mg/kg Pregabalin for seven weeks improved the retention time significantly compared to that of diabetic animals as well as compared to their base line values. After 8 weeks untreated diabetic rats showed significantly decreased locomotor activity showing the effect of Diabetic Neuropathy on motor function. Seven weeks treatment with 15 mg/kg Pregabalin didn’t improved the locomotor activity in diabetic rats.

Effect of Pregabalin on Oxidative stress markers was shown in Table 4. In the present study there was a significant fall in antioxidant enzymes GSH catalase and SOD in sciatic nerves of diabetic rats. 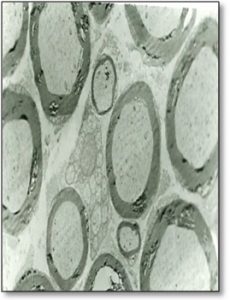 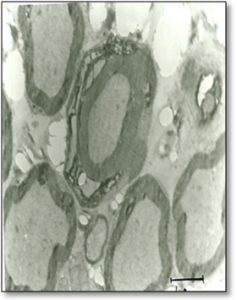 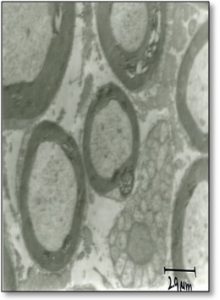 DISCUSSION: STZ induced Diabetic Neuropathy may result in the generation of Reactive Oxygen Species (ROS) like oxygen free radicals and leads to nerve damage 17. The change in the injured afferents sensitizes the nociceptive afferents that account for the characteristic symptoms of sciatica, neuropathic pain 18. Neuropathy pain is defined as a form of chronic pain that results from damage or abnormal function of central or peripheral nervous system 19. The clinical presentation of neuropathic pain includes hyperalgesia, allodynia, and spontaneous pain 20. Changes within the nervous system associated with neuropathic pain include critical up regulation of the calcium channel subunit CaVα2δ-1 21, 22. Pregabalin, interacts specifically with the CaVα2δ-1 subunit of voltage-gated calcium channels providing an antihyperalgesic and antiallodynic effect specific for its action at the CaVα2δ-1 subunit 23.

Preclinical trials have demonstrated an anti-hyperalgesic and anti-allodynic effect of pregabalin in various animal models of neuropathic pain 24, 25.

Opposite to this, diabetes causes increase in the lipid peroxidation products such as malondialdehyde (MDA) or conjugated dienes in sciatic nerves 29. Scavenging free radicals reduced the above effects of sciatic pain models 30. In the present study Pregabalin increased the antioxidant enzyme levels in diabetic rat sciatic nerves and scavenged the free radicals responsible for nerve damage. So the anti oxidant potential of Pregabalin in peripheral nerves is also contributing to anti nociceptive action of Pregabalin along with its central effects. According to the present study no motor deficits were found with Pregabalin treatment in diabetic rats. Our findings were in line with previous findings 31. Pregabalin has analgesic, anti-convulsant and anxiolytic activities 32. The decreased loco motor activity in diabetic rats was not improved by Pregabalin treartment. It can be attributed to its anxiolytic activity.

From experiments in animals, it can be suggested that the pathogenesis of diabetic neuropathy is likely to be associated with demyelination, axonal atrophy and degeneration 33. However Pregabalin treatment in diabetic rats prevented these structural derangements of sciatic nerve. The preventive effect of Pregabalin might be because of attenuation of oxidative stress mediated apoptosis in sciatic nerves.

CONCLUSION: The present study revealed that 15 mg/kg Pregabalin significantly prevented the amelioration of defensive antioxidant enzyme levels and reduced the lipid peroxidation in sciatic nerves of STZ induced diabetic rat model. It also prevented the abnormal structural changes of sciatic nerve in diabetic rats. There by the present study uncovered the neuroprotective action of Pregabalin in STZ induced neurotoxicity. The anti-neuropathic effect of Pregabalin was not only mediated through its action on voltage gated Ca+2 but also through its antioxidant action by the restoration of endogenous antioxidant enzyme levels.