ABSTRACT: The present investigation deals with the assessment of neuroprotective effect Leucas aspera in streptozotocin (STZ) induced Alzheimer’s disease (AD) in rats. AD was induced by administering STZ (3 mg/kg, ICV) on day one and 3rd day after surgery. Surgery was performed on anesthetized rats with the help of the stereotaxic apparatus. STZ induced AD rats were treated with ethanolic extract of Leucas aspera (100, 200, and 400 mg/kg, p.o.) for 28 days. Effect of Leucas aspera root in AD rats was assessed by estimating the alteration in the behavior (Y maze apparatus and single trail passive avoidance) and biochemical parameter in the brain tissue {Oxidative stress parameters (SOD, CAT, and LPO), amyloid β peptide (Aβ) and acetylcholinesterase (AchE). Treatment with Leucas aspera shows significant (P<0.01) increased in the % of alteration in the behavior and step-through latency in Y maze task and single-trial passive avoidance test compared to AD rats. Leucas aspera significantly (P<0.01) decreases the AchE in the brain tissue compared to AD rats, whereas treatment with Leucas aspera significantly reduces the oxidative stress level in AD rats. The present study concludes the neuroprotective effect of Leucas aspera extract in AD rats by reducing oxidative stress and AchE in the brain tissue.

INTRODUCTION: Alzheimer's is associated with neuronal degeneration, characterized by memory loss and altered behavior. Many pathological conditions like increased oxidative stress, amyloid β (Aβ) plaque formation, neuroinflammation results in AD 1. Free radicals and the oxidative stress they generate have been implicated as the prime factors responsible for the neuronal changes which mediate these behavioral effects.

Therefore, free radical scavengers and antioxidants have been proposed as agents that may delay or inhibit the progression of such neurodegenerative disorders 2. Leucas aspera belonging to the family Lamiaceae is well-known for its wide medicinal applications. It is used traditionally as an anti-inflammatory, a stimulant in the treatment of jaundice, cough, asthma, conjunctivitis, diabetes, malaria, skin diseases, snakebite, toothache, and wound healing.

Preparation of Extracts: In this study, the dried root was coarsely powdered and kept it into a plastic container with ethanol for 72 h. The extract was concentrated using a rota vapor at reduced temperature and pressure in order to remove the solvent completely. It was dried and kept in desiccators till experimentation (Yield 8.5% w/w).

Animals: Healthy male Wistar rats (180-250 g) at about 8 weeks of age were used for the pharmacological screening in the present study. The animals were housed at 20 ± 2 °C temperature, 12 h light/dark cycle, and 60 ± 5% of relative humidity. Rats were fed with standard diet and water ad libitum. Protocols of the present investigation for all the animal studies were approved by the Institutional Animal Ethical Committee.

Acute Toxicity Study: The acute toxicity study was performed for the ethanolic extract of Leucas aspera according to the OECD 423 guidelines 16. The extract at different doses of 5, 50, 300, and 2000 mg/kg, p.o., was administered to the rats and observed closely for 14 days. All the rats were observed for behavior changes and mortality at the end of the experiment. The extract was found safe up to 2000 mg/kg.

Y-maze Task: Short-term spatial memory per-formance was assessed by recording spontaneous alternation behavior during a single session in a Y-maze 18-19. This method is based on the tendency of rodents to enter an arm of a Y-maze that was not explored in the last two choices. Each rat, naive to the maze, was placed at the end of one arm and allowed to move freely through the maze during an 8 min session. The series of arm entries was recorded visually. Arm entry was considered to be completed when the base of the animal’s tail had been completely placed in the arm. Alternation was defined as successive entries into the three arms on overlapping triplet sets. The effect was calculated as percent alternation according to the following formula

Single Trial Passive Avoidance Test: This test was done 3 days after Y-maze task 20. The apparatus consisted of an illuminated chamber connected to dark chamber by a guillotine door. Electric shocks were delivered to the grid floor by an isolated stimulator. On the first and second days of testing, each rat was placed on the apparatus and left for 5 min to habituate to the apparatus. On the third day, an acquisition trial was performed. Rats were individually placed in the illuminated chamber. After a habituation period (2 min), the guillotine door was opened, and after the rat entering the dark chamber, the door was closed, and an inescapable scrambled electric shock (40 V for 3 s once) was delivered. In this trial, the initial latency (IL) of entrance into the dark chamber was recorded, and rats with IL greater than 60 s were excluded from the study. Twenty-four hours later, each rat was placed in the illuminated chamber for retention trial. The interval between the placement in the illuminated chamber and the entry into the dark chamber was measured as step-through latency (STL, up to a maximum of 600 s as a cut-off).

Brain Tissue Homogenate Preparation: Rats were sacrificed and brain dissected out, washes it thoroughly with saline solution, and divided into two halves. One-half of the brain of each rat was homogenized instantaneously in a solution containing Tris-Hcl (50 mM, pH 7.4) and sucrose (300 mM). The tissue homogenate was centrifuged at 10000 RPM for 10 min at 4 °C, and the supernatant was separated for the below given biochemical estimation 21.

Estimation of βeta Amyloid: Aβ was measured in brain tissue extracts using an ELISA Kit. Aβ was captured by antibody-coated plates (BNT77) and detection of Aβ1-40 and Aβ1-42 peptides achieved with the horseradish peroxidase-conjugated antibodies BA27 or BC05, respectively. Developed plates were analyzed at an optical density of 450 nm 22.

This decrease in the % alteration in behavior confirms the AD in a negative control group, i.e., STZ only treated rats. Whereas, treatment with LA at the dose of 100.200 and 400 mg/kg were significantly (P<0.05) increased the % of alteration in behavior compared to AD rats. Fig. 2 and 3 show the effect of LA on STL in the passive avoidance test in STZ treated AD rat. For STL, there was decrease time significantly (P<0.05) in STZ only treated rats compared to the control group. This decreased time was recovered with the treatment significantly at the dose of LA 100, 200, and 400 mg/kg (P<0.05, respectively. 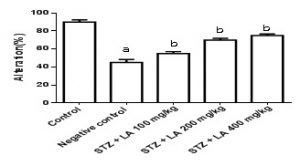 FIG. 1: EFFECT OF LEUCAS ASPERA EXTRACT ON ALTERATION IN BEHAVIOR IN THE Y-MAZE MODEL IN STZ TREATED AD RATS. Values are Means ± SEM. a p<0.05 vs. Control. b p<0.05 vs. negative control 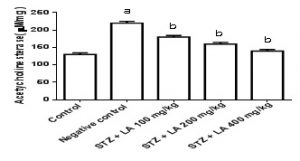 DISCUSSION: AD induced by STZ produces progressive deficits in cognitive function in rats, which is similar to sporadic kind of AD, as indicated by behavioral tests including passive avoidance paradigm and spatial cognitive deficit in Y-maze task 27.

Literature suggested that improvement in the % alteration and step-through latency behavior in Y maze and a single-trial passive avoidance test, respectively, confirms the improvement in memory and cognitive performance in AD rats 28. Results of present study demonstrated that treatment with LA (100 mg/kg, 200 mg/kg & 400 mg/kg) ameliorates the cognitive function in STZ induced AD rats.

ACKNOWLEDGEMENT: The authors are grateful to DST-FIST, Govt. of India, New Delhi for their infrastructure support to Department of Pharmacology and JSS College of Pharmacy, (JSS Academy of Higher Education and Research) Ooty, for their  valuable support.