ABSTRACT: In the current scenario, high concentrations of acrylamide (ACR), a water-soluble vinyl monomer, which is used industrially and also found in thermally processed carbohydrate-rich foods, poses serious health risks to humans. Oxidative stress is an important mediator of central and peripheral neurotoxicity, which is one of the most recognized toxicological effects of high concentration acrylamide exposure in humans and experimental animals. The present study was designed to investigate the protective effect of Morus nigra fruit extract against acrylamide induced neurotoxicity modeled in Danio rerio (Zebrafish). Mulberry fruit is rich in mostly polyphenolic compounds such as anthocyanins and flavonoids. Forty zebrafishes were randomized into three experimental groups, (I) normal control group, (II) 0.75mM ACR treated group and (III) post ACR fruit extract-treated group. Upon completion of 72 h of ACR-exposure, a few exposed fishes were randomly selected for treatment with the fruit extract. In the ACR-treated group, a significant elevation in lipid peroxidation with concomitant depletion in the activities of catalase, glutathione reductase and acetylcholinesterase were observed in the zebrafish brain. Therapy with mulberry fruit extract post-ACR exposure showed a protective effect by the restoration of catalase, glutathione reductase, and acetylcholinesterase activities to values comparable to that of the control group. A remarkable reduction in the lipid peroxidation levels was also observed. The neuroprotective effect of the extract in the current study is suggestive of inhibition of oxidative stress in the zebrafish brain owing to the potent antioxidant properties of mulberry.

INTRODUCTION: Human activities and industrial activities have led to the introduction of various potentially harmful chemicals into the environment and when in it comes in contact with humans and animals, result in many oxidative stress-related disorders 1.

Acrylamide is one such chemical that is a white, crystalline, water-soluble alkene. Humans are exposed to acrylamide via industrial exposure, acrylamide contaminated drinking water, thermally processed starchy foods such as potato chips and cereal products where high temperature (above 120 °C) causes the reaction between free amino groups and carbonyl source to form acrylamide.

Extensive studies in rodents and other experimental models have demonstrated that exposure to monomeric ACR to cause carcinogenicity, developmental toxicity, neurotoxicity, and genotoxicity 2.

Acrylamide causes malfunctioning of neuro-transmitter release by binding to sulfhydryl groups on cysteine residues of membrane fusion related proteins 3. ACR poisoning is presented with major symptoms related to polyneuropathy, including lethargy, ataxia, skeletal muscle weakness and numbness of the extremities all indicative of problems with the central nervous system 4.

Morus nigra owing to the presence of bioactive polyphenolic compounds such as anthocyanins, flavonoids, stilbene glycosides, lectins, oligosaccharides, unsaturated fatty acids, enzymes, and inhibitors possess pharmacological activities such as antihyperglycemic, anti-inflammatory, and neuroprotective effects 5. Oxyreservatrol, a natural hydroxystilbene present in mulberry extracts, has been shown to have a neuroprotective effect in the case of neurodegenerative diseases due to oxidative damage such as Alzheimer’s disease which is usually marked by cellular damage by high lipid peroxidation and increase in iron and aluminum 6.

The present study was aimed to investigate the acrylamide induced neurotoxicity in zebrafish and the neuroprotective effect shown by Morus nigra plant extracts by analyzing the changes in the various biomarkers in the adult zebrafish brain and also the behavioral changes. This model is an efficient way to study neurotoxicity due to the similarities between zebrafish neurotransmitter systems and human genome and is also cost-effective, time-saving, with no ethical issues.

Preparation of Plant Extract: The samples were washed cleaned with distilled water. 10% extract of the plant sample was prepared by homogenizing the fruits of M. nigra with water using pestle and mortar. The crude extract was filtered and stored at 4 °C until further use. Plant authentication number is Morus macroura RKC05_180811

Phytochemical Screening: The fruit extract of M. nigra was qualitatively analyzed for the phyto-chemical components as per the standard methods.

Animals: The mutant variety of Danio rerio was obtained from Zooland Aquarium in Shivajinagar, Bengaluru. The fish were quarantined and stored in 5L aquarium and were fed with commercially available feed once every 24 h. The fishes were acclimatized to laboratory conditions and kept on normal diet for 1 week.

Test Phase: Random fish were selected from each group and euthanized by inducing hypothermic shock in chilled ice (2° - 4°C). The fish brains were dissected and homogenized with 5 ml of 0.1M phosphate buffer of pH 7.2 using mortar and pestle. The homogenate was then centrifuged at 5000 rpm for 15 min at 4 °C. The supernatant was collected. This was used as the source for the enzyme 8.

Estimation of Glutathione Reductase Activity: Glutathione reductase was assayed by the method of Stahl et al., 1963. The change in optical density of the reaction mixture, constituted by phosphate buffer, EDTA, GSSG, NADPH, and distilled water, after addition of brain homogenate was measured spectrophotometrically at 340 nm for 2 min at 30-sec intervals. The enzyme activity was expressed in molar per minute per mL 10, 11.

Estimation of Lipid Peroxidation: The level of lipid peroxides was quantified by Thiobarbituric acid reaction method described by Ohkawa et al., 1979, by measuring the formation of thiobarbituric acid reactive substances (TBARS). The TBARS was extracted into 15:1 butanol: pyridine mixture and absorbance was measured in a UV-Visible spectrophotometer at 532 nm and expressed as nmoles of malondialdehyde (MDA) released 10, 12.

To this mixture, acetylcholine iodide was added and the change in absorbance was monitored using a spectrophotometer at 412 nm at 1 min intervals. The enzyme activity was calculated by using a molar extinction coefficient of acetylcholine 13, 14.

Behavioral Study: This study was conducted to evaluate the behavioral changes in swimming patterns upon acrylamide exposure. A 5L tank containing 0.75mM acrylamide solution prepared in distilled water was taken and normal healthy fishes were transferred into it. The parameters of catalepsy and latency were studied.

Phytochemical Analysis: Preliminary phytochemical screening revealed the presence of alkaloids, phenols, flavonoids, terpenoids, tannins, saponins, anthocyanins, carbohydrates, proteins and amino acids in the fruit extract of M. nigra. It was seen that the fruit extract was devoid of phytosterols. The presence of alkaloids, phenolic compounds, flavonoids and tannins have been correlated with varying degrees of antioxidant and anti-inflammatory properties. Therefore, the antioxidant and neuroprotective activities observed in our current study may be due to the activities of one or combination of many of these compounds present in M. nigra plant. 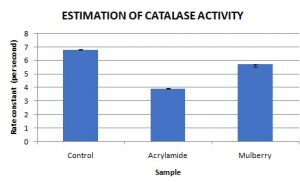 FIG. 1: QUANTITATION OF CATALASE ENZYME ACTIVITY (s-1) IN THE BRAIN HOMOGENATE OF EXPERIMENTAL GROUPS I, II AND III. The values are expressed as mean ± SD. 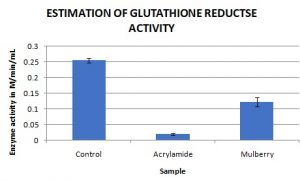 FIG. 2: QUANTITATION OF GLUTATHIONE REDUCTASE ACTIVITY (M/min/mL) IN THE BRAIN HOMOGENATE OF EXPERIMENTAL GROUPS I, II AND III. The values are expressed as mean ± SD.

Estimation of Lipid Peroxidation: Exposure of the fishes to acrylamide caused a highly significant increase in the rate of lipid peroxidation producing malondialdehyde in the concentration of 158666.66 ± 1154.700 nmoles in comparison to the control value of 29000 ± 3464.10 nmoles.

Treatment of ACR exposed fish with M. nigra fruit provided lipid peroxide value of 38333.33 ± 2081.66 nmoles which is comparable to the control value. 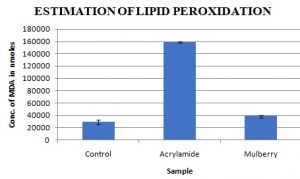 FIG. 3: QUANTITATION OF LIPID PEROXIDATION (CONCENTRATION OF MDA IN nmoles) IN THE BRAIN HOMOGENATE OF EXPERIMENTAL GROUPS I, II AND III. The values are expressed as mean ± SD. 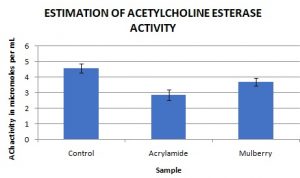 FIG. 4: QUANTITATION OF ACETYLCHOLINE-STERASE ACTIVITY (µmoles/mL) IN THE BRAIN HOMOGENATE OF EXPERIMENTAL GROUPS I, II AND III. The values are expressed as mean ± SD.

Behavioral Study: During induction of catalepsy upon ACR exposure, the fishes were observed to display aberrant swimming patterns like arrow like swimming, circular swimming and finally a motionless state. Latency to travel from one point to another was observed in the ACR exposed fish.

The rigidity of fins was observed due to restricted muscular movements. Thus, the ACR treated fishes took longer to travel from one point of the tank to another. Upon ACR exposure, the fishes were observed to spend more time towards the bottom of the tank rather than at the top indicating anxiety in them.

Free radicals formed by the polyunsaturated lipid peroxidation produce 4-hydroxynonenal, malondi-aldehyde, and acrolein are the ultimate mediators of synaptotoxicity in many neurodegenerative diseases like Alzheimer’s disease that are characterized by oxidative damage. They generate neurotoxic α, β-unsaturated carbonyl derivatives which lead to oxidative neuronal injury 15. The role of oxidative stress in causing ACR-neurotoxicity is demonstrated by the acrylamide-dependant increase in the malondialdehyde levels and decrease in the activities of the natural antioxidant enzymes viz. catalase and glutathione reductase. Many therapeutic including neuroprotective properties have been attributed to Morus nigra plant and this was consistent with the data obtained in the study. The phytochemical screening of Morus nigra fruit extract revealed the presence of bioactive constituents such as flavonoids, phenolics, and tannins which have been associated with having potent antioxidant activities.

The propensity of Morus nigra extracts to mitigate oxidative stress in the zebrafish brain was evidentially confirmed by the improvement in the antioxidant enzyme activities. The treatment of acrylamide exposed with mulberry fruit extract significantly reduced lipid peroxidation to and restored catalase and glutathione reductase levels compared to the acrylamide group. Acetylcholine esterase activity is important for the breakdown of acetylcholine within the synapse and recycling back of choline for further synthesis of acetylcholine 16.

CONCLUSION: From the present study, we may conclude that Mulberry fruit possesses neuro-protective propensities and have the potential to mitigate oxidative stress caused by ACR toxicity.

This is well corroborated by the previous studies conducted on the plant with regard to their antioxidant and free radical scavenging activities.

ACKNOWLEDGEMENT: The authors are grateful to the Co-ordinator and Associate Professor, Department of Biochemistry, Mount Carmel College (Autonomous), Bengaluru for providing research facilities and encouragement. They are also indebted to the Department of Sericulture, Gandhi Krishi Vignana Kendra, Bengaluru for permitting collection of plant sample from their campus.

CONFLICT OF INTEREST: No potential conflicts of interest.