INTRODUCTION: In the pharmaceutical sector, there is always a strive to reduce costs derived from the constant inclusion of generic drugs in the market, which increases the level of competence, leading to the search for new alternatives (i.e., obtention of co-processes); among these alternatives are to attain new formulations that will reach the cost-reducing objective without affecting the product’s quality 1, 2.

Regarding the production of oral solids, excipients are searched to allow elaborating tablets through direct compression because this manufacturing process offers diverse advantages over the wet or dry granulation process. Among them is the cost reduction; however, that process presents the disadvantage of being highly influenced by the fluidity and compressibility characteristics of the excipients 3-6. Hence, the development of new excipients has become a niche of opportunities regarding materials innovation 7.

There are mainly three methodologies: new molecules, existing excipients with higher purity degree, or the combination of those already existing in the market; the latter is the option with the best economic and regulatory advantages 8.

Microcrystalline cellulose (MCC) is one of the excipients used in the continuous search for an ideal excipient, that is, the one to possess the required flowability and compressibility charac-teristics in a direct compression process 9, 10. Since 1980, the co-processing of excipients that included the MCC with calcium carbonate 11 was introduced, and, later on, the silicified MCC was developed; in addition, sugars have been used as excipients for direct compression, like lactose (fast flow), sorbitol, mannitol, and Isomalt 12.

This work aimed at developing new multifunctional co-processed excipients with an improved flow-ability, excellent compressibility and an equilibrium between their deformation behavior and fracture. To achieve this, different proportions of micro-crystalline cellulose (Avicel® PH101) and Isomalt (galenIQ® 800) were used with pregelatinized starch (Starch® 1500) and polyvinylpyrrolidone (Plasdone® K-25) as binding agents in a fluid bed.

Elaboration of Co-processed Excipients: Microcrystalline cellulose was chosen as a base excipient, and Isomalt was added at 10, 20, 30, and 40% proportions; Plasdone® K-25 and Starch® 1500 were used at a 5 and 10% w/v concentration respectively in a hydro-alcohol solution (75:25, water/ethanol), as binding agents for the granulation process, Table 1. The co-processed compounds were agglutinated in an Aeromatic Fielder STREA 1 equipment, where the pressure of the equipment was 0.45 MPa and the pressure of the spraying gun was 0.1 MPa, at a drying temperature of 31 ± 2°C.

Sieving and Rheological Characterization of the Raw and Co-processed Materials: In a Retsch AS 200 sieving machine, cascade sieving was performed to know the distribution of the size of particles of used excipients and the manufactured co-processed ones; once this had been determined, we obtained the fraction with the highest population. The latter was then subjected to rheological characterization by measuring the angle of repose (Eq. 1), flow velocity (Eq. 2), Hausner index (Eq. 3), and percentage of compressibility (Eq. 4), following the method specified in the Pharmacopeia 13.

Where h is the height and r the radius

Where g are the grams and t the time in seconds

Where Db is the bulk density and Dt the tapped density

Where Db is the bulk density and Dt the tapped density

In 2019, Zacarías et al., 14 proposed an equation involving all the previous parameters, which allows determining the flowability of the raw materials and the obtained co-processed compounds and corresponds to the equation that calculated the flow index. The equation allows establishing a relation between the parameter obtained directly, as is the Vf, and the parameters calculated indirectly, as are AR, %C, and HI (Eq.5).

The greater the Vf, the better will be the flowability of the material; hence, it was considered directly proportional in the flow index equation; whereas for AR, %C, and HI, the smaller their value, the flowability of the powder will be better; hence, they were considered indirectly proportional to the flow index in the equation.

Data were plotted according to Heckel’s model, with Eq. 7; the least square method was used to determine the equation of the straight line.

Where k is the slope of the obtained straight line, P is the applied pressure (axis x), and A is the intercept in axis y.

To determine the deformation pressure (Py), the inverse of the slope was calculated (Eq. 8).

Tensile Strength: The resistance to diametral rupture of previously mentioned tablets was determined in a hardness meter (Pharma Alliance Group PAH-01), and these results were used to perform the tensile strength curves as a function of the compaction force. The tensile strength (σT) was assessed according to Eq. 9.

Where F represents the resistance to rupture, d is the diameter of the tablet, and h is the height or thickness.

Micrographs: Avicel® PH101 and galenIQ® 800 were observed in a digital microscope (DinoLite AM4515ZT), as well as the co-processed compounds obtained with them aiming at observing the possible changes after the binding process.

Statistical Analysis: A post hoc (Tukey) test was used to compare the average particle sizes of the co-processed compounds obtained with both binders at each of the used proportions. To compare the rheological characterization parameters, as well as the Py values and the slopes of the tensile strength graphs, subjected to different compaction pressures, a one-way variance analysis (ANOVA) was used, followed by a Tukey test with the SPSS software.

Sieving and Rheological Characterization: The size of the average particle for Avicel® PH101 was 69µm and 40 µm for galenIQ® 800, and those obtained for the co-processed compounds are summarized on Table 2.

Table 3 and 4 depict the results of the rheological tests performed on the co-processed compounds made with Avicel® PH101 and galenIQ® 800, as well as the flowability that they possess according to the classification provided by Pharmacopeia 13.

TABLE 5: ONE WAY ANALYSIS OF VARIANCE OF FLOW RATE OF CO-PROCESSED AVICEL® PH101 AND GALENIQ®800, BINDING WITH PLASDONE® K25

TABLE 6: TUKEY TEST APPLIED TO THE AVERAGE OF FLOW RATE OF CO-PROCESSED WITH AVICEL® PH101 AND GALENIQ®800, BINDING WITH PLASDONE® K25

*Difference of means is significant at level 0.05

Co-processed compounds Avicel® PH101/ galenIQ® 800 with Starch® 1500: The ANOVA test revealed that there was no statistically significant difference among groups regarding the AR, bulk and tapped density tests, nor for the % C or the HI.

For Vf parameter, differences existed among groups, revealing that the proportion with a significantly higher flow velocity (7.95g/s) was that of Avicel® PH101/galenIQ®800 (70/30%), Table 7.

TABLE 7: TUKEY TEST APPLIED AT AVERAGE OF FLOW RATE OF CO-PROCESSED WITH AVICEL® PH101 AND GALENIQ®800, BIDING WITH STARCH® 1500

*Difference of means is significant at level 0.05

It is important to point out that when using Starch® 1500, the flowability according to AR was excellent, in contrast with those elaborated with Plasdone K25, which were just good and adequate; this is due to the excellent sliding properties of starch, which is also a good binder.

Flowability and compressibility are among the main characteristics that a good excipient must have for direct compression 12, 16. The parameters considered in the flowability of the co-processed compounds were the AR, %C, HI, and Vf Table 3 and 4; therefore, Avicel® PH101/galenIQ®800 (60/40%) co-processed compound with Plasdone K25 can be considered the best for those and Avicel® PH101/galenIQ®80 (70/30%) with Starch® 1500.

Evaluation of Compressibility and Resistance to Fracture of Obtained Co-processed Compounds:

Heckel Model: This model assesses the effect of the pressure applied on the relative density of a powder during compression. When applying the Heckel equation (Eq. 7), a straight line is obtained, where the inverse of the slope (Py) will indicate the minimal pressure required to achieve the plastic deformation of the material being studied.

The adjustment of the behavior of the different co-processed compounds to the model is depicted in Fig. 1 and 2, in which the linear relation between 75 and 225 MPa was considered.

Fig. 1 depicts the compressibility profiles of the co-processed compounds elaborated with Plasdone K25, which did not reveal a large variability.

Polyvinylpyrrolidone (PVP) acts as a plasticizer in granulated systems due to it glass transition temperature (Tg), leading the granulated product to go from a glass state to a flexible one, presenting better compression and compaction properties,17 although in this combination of materials its effect was not significant.

Fig. 2, where Starch 1500 was used as a binder, reveals that as the proportion of galenIQ® 800 increased, the slope was modified, particularly in the 60/40 proportion, which was much better than the other co-processed compounds, even better than Avicel® PH101. 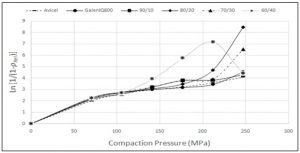 The obtained Py values, calculated for co-processed compounds, are shown in Table 8, considering that the greater the value of Py, the greater compaction pressure will be needed to alter the particles and obtain a consolidated tablet 18-19.

In the Starch® 1500 bound co-processed compounds, there was a statistically significant difference in the 60/40 relation, which presented a 3-times lower value of Py with the Avicel® PH101, which is an excellent behavior.

On the other hand, determining the tensile strength of the tablets as a function of the compaction force per square centimeter and performing the corresponding graphs allowed calculating the values of the slopes, which were indicative of the compressibility presented by the powders Table 9.

By means of ANOVA analysis of the slopes, a statistically significant difference was determined among groups, followed by a Tukey test, observing that all groups are different among themselves. The values of these slopes indicate the compressibility that the powder will show in a compression process; a greater slope will represent better compressibility. That is, with a lower compression force, tablets with a greater mechanical resistance will be obtained. This characteristic can be observed in the co-processed compound made with a 70/30% proportion of Avicel® PH101/galenIQ® 800 with Starch® 1500. Regarding those compounds made with Plasdone® K25, a greater slope was obtained with the 90/10% proportion of Avicel® PH101/galenIQ® 800. It is important to mention that this was not considered because tablets with a very high hardness were obtained outside of the range of the hardness meter used; thus, only two points were obtained, and the slope was invalidated. Therefore, the co-processed compound with the highest slope was that of the 70/30% Avicel® PH101/galenIQ® 800 relations Fig. 3 and 4. 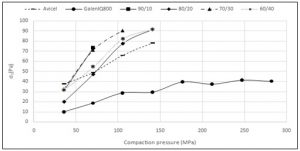 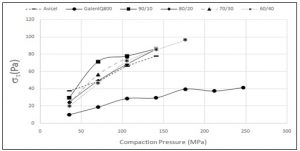 Table 10 summarizes the best co-processed compounds according to the evaluated properties.

Microphotographs: The microphotographs of Fig. 5 show the raw materials used for the elaboration of the co-processed compounds; it can be observed that galenIQ®800 presents a rounded shape, but with irregular borders Fig. 5a, whereas the microcrystalline cellulose has an elongated shape Fig. 5b, like a needle. 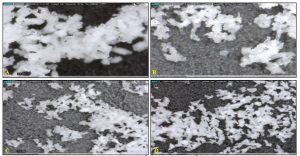 The microphotographs of Fig. 7 show the co-processed compounds made with Starch 1500, revealing agglomeration of the components, which can be seen among the Avicel® PH101 particles (needle-shaped particles). In the microphotographs of those co-processed compounds in which the proportion of galenIQ® 800 was increased, an agglomeration of Avicel® PH101 particles was observed. No clear differentiation was observed in the particles between the components because the galenIQ® 800 was partially solubilized in the solvent used in the wet granulation process, achieving with this a joint agglomeration. 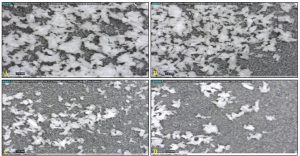 ACKNOWLEDGEMENT: Ana Vanessa Vélez Godínez thanks CONACyT for the fellowship to perform the MS studies in Pharmaceutics (fellowship No. 408872).