ABSTRACT: Piperine, a major alkaloid in black pepper is one of the most promising bioenhancers till date. Other methods used for its extraction suffer drawbacks such as poor extraction efficiency, tedious and expensive isolation methodology, piperine photodegradation, etc. Hence a simple, rapid and efficient method has been developed for the isolation of piperine from the fruits of Piper nigrum. The methods under study involve extraction of piperine with various solvents such as ethanol, glacial acetic acid and dichloromethane. Then isolation and purification were followed by separate classical methods for respective extracts. Compared to other two methods, the novel method using glacial acetic acid proved to be effective in isolating piperine with higher yield and in higher purity. Hence extract derived using glacial acetic acid was further subjected to column chromatography. Finally raisins removal and crystal formation were facilitated by recrystallization with solvent ether after alkali wash. Then identification of the compound was confirmed by various analytical methods TLC, melting point, UV-visible spectrophotometer, FT-IR, HPLC and compared it with authentic piperine which resulted into better pure piperine crystals as that of authentic piperine.

Literature review also revealed that piperine is one of the bioenhancer which can be isolated from black pepper 8.

A bioenhancer is an agent which increases bioavailability and bioefficacy of a particular drug with which it is combined; it does not have any typical pharmacological activity of its own at the dose used 9. Piperine increases bioavailability of drugs like Barbiturates, Coenzyme Q10 (CoQ10), Curcumin (extract from turmeric), Dapsone, Ethambutol, Atenolol, Phenytoin, Propranolol, Pyrazinamide, Rifampicin, Ampicilin, etc. 7, 10, 11, 22. Bioavailability of Rifampicin increases about 60% due to Piperine i.e dose reduces 450mg to 200mg of Rifampicin. Cadila Pharma already launched Anti-TB formulation named Risorine containing 200 mg of Rifampicin, 300 mg of Isoniazid (INH) and 10mg of Piperine, in November 2009 11.

One of the popular methods used for essential oil extraction in Piper nigrum is supercritical fluid extraction. In this method carbon dioxide is used as a solvent at critical temperature and pressure. But this technique is relatively very expensive due to requirement of high-pressure equipment. Though high-pressure steam treatment enhances extraction rate it is relatively slow and consumes a large amount of steam 14, 15.

Extraction by using various solvents is another method in which piperine is extracted by using solvents like ethanol 16, dichloromethane 17 and glacial acetic acid 18. In this method extraction of the fruit powder with glacial acetic acid is done. The piperine extract obtained is further partitioned into chloroform. Purification of piperine is done by column chromatography along with toluene and ethyl acetate (7:3) 19 as a solvent can be used.

Materials: Black pepper was procured from local market while authentic piperine procured from Yucca Enterprises, Mumbai-400 037. All chemicals obtained from the college laboratory.

Methods of extraction of piperine:

Isolation and purification by Column Chromatography: 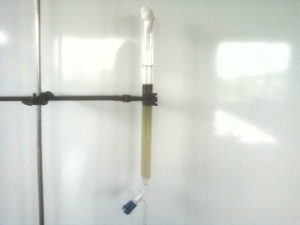 TABLE 1: ANALYSIS OF FRACTIONS BY TLC 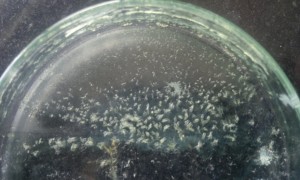 After isolation identification of the product was done by TLC, melting point, IR, HPLC and UV-visible spectrophotometer and compared it with standard piperine. 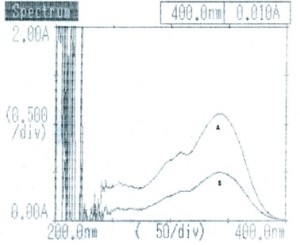 FIG. 4: λmax OF AUTHENTIC PIPERINE (A) AND ISOLATED PIPERINE (B) IN METHANOL 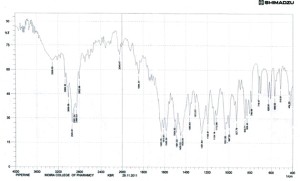 As shown in table 2; peak of all bonds were present in isolated piperine crystals which is nearby to Standard IR values of each functional group.

HPLC analysis: HPLC analysis was done by using column HiQ Sil C18W and mobile phase methanol: water (70: 30) with 1ml/min flow rate. Retention time for authentic piperine was found to be 6.246 min while retention time of isolated piperine was 6.232min. Hence from these graphs, we confirm that needle shaped crystals was of piperine (figure 7A & B). 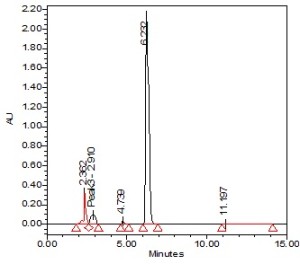 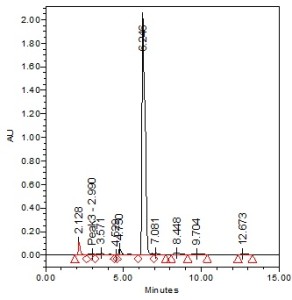 CONCLUSION: As discussed above, the novel method for isolation of piperine was found to be extraction with glacial acetic acid and recrystallization with solvent ether after alkali wash proved to be effective in isolating piperine with higher yield and purity. Isolated piperine was identified by chemical test, M.P, TLC, UV and IR and compared with authentic piperine which resulted into better pure piperine crystals as that of authentic piperine.