ABSTRACT: Two new oleanane triterpene type saponins named lebbeckanin I (1) and lebbeckanin II (2), in addition to a new isomer of methyl inositol, D-1-O-methyl-cis-inositol (3), were isolated from butanol fraction of Albizia lebbeck (L.) Benth flowers. Their structures were established on the basis of spectroscopic analysis including  MS, 1H & 13C NMR, 1H-1H COSY, HSQC & HMBC. The fraction containing mixture of compounds 1 and 2 exhibited significant cytotoxic activity against HePG-2 (Hepatocarcinoma), HEP-2 (Larynx carcinoma), HELA (Cervical carcinoma), MCF-7 (Breast carcinoma) and HCT-116 (Colon carcinoma) cell lines with LD50 values of 1.74, 3.42, 4.29, 0.65 and 0.74 µg respectively. In addition, the antimicrobial screening of the same fraction was evaluated and showed variable degrees of activity against all the tested organisms. It is notable that the same fraction showed antifungal activity against Syncephalastrum racemosum (RCBM 05922) stronger than that exhibited by Amphotericin B

INTRODUCTION:    A. Lebbeck (L.) Benth is a fast growing medium sized deciduous tree measuring 10-12 m in length, the tree is cultivated in Egypt. A. lebbeck is used in folk medicine to treat some inflammatory conditions as asthma, arthritis, burns allergic rhinitis, bronchitis and leprosy 1. In addition, saponins of  A. lebbeck have been claimed to be useful in treatment of Alzheimer`s and Parkinson`s diseases, moreover A. lebbeck extracts showed several biological activities 2,  while flavonoids exhibit antioxidants properties 3. As well as A. lebbeck extract exhibits potent hepatoprotective activity along with various pharmacological activities such as CNS, cardiotonic, lipid-lowering, antioxidant 4 and hypoglycemic activities 5.

Biologically active triterpenoid saponins were isolated also from different Albizia species 6-15.   A. lebbeck growing worldwide revealed many biological and phytochemical interests. However, the species growing in Egypt has not received attention. The present study was undertaken for isolation of two new saponins named lebbeckanin I (1) and lebbeckanin II (2) from butanol extract of the flowers and a new isomer of methyl inositol, D-1-O-methyl-cis-inositol (3); in addition to the evaluation of cytotoxic and antimicrobial activities of  the fraction containing mixture of compounds 1 and 2.

The following solvent systems were used in TLC development

The flowers of Albizia lebbeck (L) Benth family Fabaceae, were collected on May 2010 from the vicinity of Benha governorate, Qalioubia, Egypt. The identification was kindly identified by Prof dr. Hussain Abdel Baset, Professor of Botany, Faculty of Science, Zagazig University, Zagazig, Egypt. A voucher specimen is deposited in Department of Pharmacognosy, Faculty of Pharmacy, Zagazig University, Egypt. The flowers were shade dried and powdered.

Isolation of compounds 1-3 from butanol Fraction of A. lebbeck flowers:

The dried powdered A. lebbeck flowers (320 g) was extracted with 95% ethanol and the resulting ethanolic extract (52.4 g, 14.9%) was dissolved in mixture of methanol and water (1:9) then partitioned with petroleum ether, chloroform, ethyl acetate and butanol saturated with water to give 3.5 g (1.8%), 0.89 g (0.46%), 1.2 g (0.62%) and 17.5 g (9.1%) of petroleum ether, chloroform, ethyl acetate and butanol fractions respectively. The butanol soluble fraction of flowers (15.5 g) was subjected to silica gel column packed by wet method using ethyl acetate. The elution was started with ethyl acetate then the polarity increased gradually with methanol. The eluate was collected in 50 fractions, 250 ml each, concentrated under reduced pressure, monitored by TLC using solvent systems (I, II & III), visualization spray reagent (anisaldehyde/ sulphric acid and aniline phthalate) and similar fractions were combined together.  For purification, fractions (38-40) and (44-46) were separately rechromatographed over Sephadex LH20 column (2 x 35 cm, 10 gm) and eluted with methanol. The resulting fractions were concentrated to afford 27 mg of compound 1 and 15 mg of compound 2 respectively. Fractions 9-20 revealed the presence of one major green spot using aniline phthalate as spray reagent. The fractions were combined and concentrated to afford a white residue; this residue was crystallized from methanol to afford 750 mg of compound 3.

Acid hydrolysis of compounds 1 and 2:  Compounds 1 (10 mg) and 2 (5 mg) were separately dissolved in 9 ml 2 N HCL and 9 ml CH3OH then heated at 100ºC for 6 hrs. The mixture was left to cool, diluted with water and extracted with CH2Cl2. TLC for CH2Cl2  using solvent system (III), visualizing agent anisaldhyde sulphuric acid and heating 110ºC  produced violet spot with Rf value 0.42 (compound 1) indicates triterpene or sterol skeleton. The aqueous layer was neutralized with BaCO3 and filtered; the filtrate was concentrated under reduced pressure and investigated by paper chromatography against authentic sugars. The paper was developed using solvent system (IV) and aniline phthalate as revealing agent followed by heating.

The Method: Cup-plate method 17 was used to detect the preliminary antimicrobial activity of a fraction containing mixture of compounds 1 and 2. Amphotricin B, Ampicillin and Gentamycin were used as antibacterial and antifungal standards and the zones of inhibition were measured (mm) and recorded in Table 5.

Characterization of the isolated compounds: 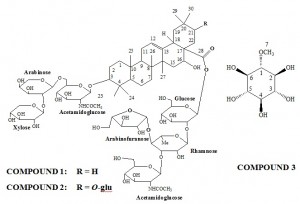 In addition to comparison with literature data 7.  Unfortunately the HMBC correlations were very few especially for sugars linkages, but the connection of these sugars with C-3 was very clear and confirmed  from the downfield shift of C-3 signal at δC 90.1 instead of  δC 78.1 of free OH group at position 318.   By careful inspection of 1H NMR and 13C NMR data it was noticed the presence of other four anomeric protons at  δH 5.38 (1H, d, J=7.0 Hz), 5.30 (1H, br), 5.32 (1H, d, J=7.0  Hz ) and 4.44 (1H, br) connected via HSQC to carbon signals at δC 95.3 (d), 101.4 (d), 111.1 (d) and 105.3 (d) respectively which with other NMR signals suggested the presence of glucose, arabinofuranose, rhamnose and 2-deoxy-2 acetamidoglucose as the second part of sugar moieties. Comparison of NMR data of these sugars with literatures 7,  9 we concluded that the linkages of these sugars with each other is branched chain of α-L-arabinofuranose, α-L-rhamnopyranose, 2-deoxy-2-acetamidoglucopyranose and β-D-glucospyranose and be in the same pattern  reported by literature 7, 9  except the presence of  terminal  2-deoxy-2-acetamidoglucose in compound 1 instead of glucose, the presence of 2-deoxy-2-acetamidoglucose was identified  from the typical amide carbon at δC 56.9, with C=O at δC 173.3 and CH3 at δC 23.1.

The branched sugars chain was suggested from  the mass fragmentation pattern of compound 1 which showed the base peak at m/z 1227 [M+-2-deoxy-2- acetamidoglucose-arabinose-H2O]. 13C NMR data of compound 1 revealed C-2 position of glucose in addition to C- 3 and C-4 of rhamnose were shifted to δC 80.1, 81.3 and 79.3 respectively which confirmed the connection of C-1 of glucose with the aglycon and C-2 with rhamnose which subsequently connected at their C-3 and C-4 with arabinofuranose and 2-deoxy-2-acetamidoglucoe respectively.

The position of the second sugar moieties at C-28 was confirmed also from the up field shift of   C-28 at δC 177.3 instead of 180.1 for the free carboxylic group 18.   The presence of non occupied hydroxyl group at C-16 was confirmed from the mass fragment, at m/z 1227 which showed the loss of one molecule of water from the free OH at C-16 this confirmed also the position of the second sugar moieties at C-28. From the above data compound 1 was unambiguously identified as 3-O-β-D-xylopyranosyl-(1→2) - α – L - arabinopyranosyl-(1→6)- 2-deoxy-2-acetamido-β-D-glucopyranosyl-echinocystic acid -28-O-β-D-2-deoxy-2-acetamido- β-D-glucopyranosyl-(1→3)-[α-L-arabinofuranosyl- (1→4)]-α-L-rhamnopyranosyl-(1→2) – β - D-glucopyranosyl ester named as Lebbekanin I (1). This is the first repot about the isolation of compound 1 from the nature.

Compound 2: The positive ESI-MS spectrum showed a molecular ion peak at m/z 1761 [M+ H] + corresponding to the molecular formula C80H132N2O40. Investigation of 13C & 1H NMR data of compound 2, (Table 2), proved that compound 2 was also triterpenoid saponin and their data were identical to those of compound 1 except the presence of extra 1H & 13C NMR signals corresponding to one glucose moiety and one hydroxyl group Table 2. The downfield shift of C-21 and H-21 in compound 2 to δC 89.5 and δH 3.45 respectively instead of δC 36.4 and δH 1.80, 1.90 in compound 1 indicating that this carbon is hydroxyl-glucosidated one.

The above suggestion  of presence of an extra glucose and OH group in compound 2 was established also from the ESI-MS spectrum of compound 2 which shows a molecular ion peak at m/z 1761 [M+H]+ with 178 mass unit difference from that of compound 1. Furthermore the mass fragmentation of compound 2 showed the first loss of glucose followed by loss of hydroxyl group through the fragments at m/z 1599 [M-162 (glu)]+  and  fragment at m/z 1583 [M-162 (glu)-H2O-H]+ reaching to the molecular weight of compound 1. The third loss in mass spectrum was the loss of arabinose and one molecule of H2O  plus acetate group which is very clear in the fragment with 100% intensity at m/z   1387 [1583-(C5H8O4)-H2O-COCH3], another mass fragment at m/z   1226 [1387-aminoglu–H]+ was detected. The fragment at m/z 962 showed the loss of two pentoses 962 [1226-arabinose-xylose]. 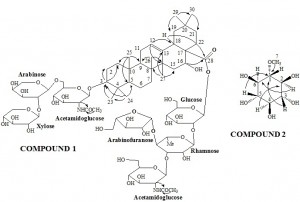 Compound 3: (Fig. 1) was obtained as white crystals, melting at 184-186ºC. The IR spectrum showed the absorption bands at 3405 & 3320 (OH), 2950 (H-C) and 1279 (C-O) cm-1. The EI-MS showed the [M+- OCH3]+ peak at m/z 164 which is consistent with a molecular formula C7H14O6. The broad band 13C NMR and DEPT spectra of compound 3 showed six methine and one methyl carbon atoms. All the carbon signals showed downfield shifts due to their attachment to oxygen atom. The 1H NMR spectrum showed methoxyl protons as singlet at δH 3.44 (3H, s) and six oxymethine protons in the range of δH 2.98 to 3.62. Since the molecular formula showed one double bond equivalent therefore compound 3 must be monocyclic.

Inositols have nine theoretically possible isomers among which seven are named as myo-, D-chiro, L-chiro-, neo-, muco-, scyllo- and allo-forms have previously been reported. Theoretically, 20 isomeric mono-O-methyl ethers of inositol are possible 19. These isomers have distinct 1H NMR spectra and characteristic coupling constant. In the 20 possible isomers of mono-O-methylated inositols muco-, allo- and cis-isomers have three axial and equatorial oriented hydroxyl or methoxyl groups. However, in muco form the three axial oriented substituents are adjacent to each other. On the other hand, in allo form the axial two oriented substituents are adjacent to each while the third axial substituent is next to the adjacent position i.e. 1, 2-4-disposition. Lastly, cis form has alternate axial and equatorial substituents.

In 1H NMR spectrum of compound 3, there were clearly three axial and three equatorially oriented protons and methoxyl group. The most upfield oxymethine protons at δH 3.00 could be assigned to the axially oriented proton vicinal to the methoxyl group. The signal was observed a broad triplet (J = 9.2 Hz). The large coupling constant allowed us to assigned axial orientation to the oxymethine protons at C-2 and C-6, respectively. The H-6 signal observed as doublet of triplet at δH 3.34 (J = 4.4 Hz) and H-2 as broad singlet at δH 3.50. HSQC showed connectivity of C-3 with proton at δH 3.50 (d, J= 8.0 Hz), C-4 with proton at δH 3.62 (brs) and C-5 with proton at δH 3.48 (d, J= 8.0 Hz). From the relative coupling constant, it was evident that compound 3 has cis-inositol configuration. This could further be confirmed by 1H-1H COSY & HMBC correlations between all the oxymethine protons and carbons.

On the basis of these cumulative evidences, the structure of compound 3 could be assigned as 1-O-methyl- inositol. D-pinitol (D-3-O-methyl-chiro-inositol) was reported to be isolated before from genus Albizia 20 and (D-1-O-methyl-cis- inositol) is a new isomer and it is the first report about the isolation of this compound from Albizia species.

TABLE 4: RESULTS OF CYTOTOXIC ACTIVITY AND LD50 IN µG OF FRACTION CONTAINING MIXTURE OF COMPOUNDS 1 AND 2 OBTAINED FROM THE BUTANOL FRACTION OF A.LEBBECK FLOWERS AGAINST DIFFERENT CELL LINES

The fraction containing mixture of compounds 1 and 2 exhibited (as shown in Table 5) strong or moderate activity against all tested microorganisms except Candida albican it showed no activity. It is notable that it exhibited antifungal activity against

TABLE 5: RESULTS OF ANTIMICROBIAL ACTIVITY OF FRACTION CONTAINING MIXTURE OF COMPOUNDS 1 AND 2 OBTAINED FROM THE BUTANOL FRACTION OF A.LEBBECK FLOWERS

CONCLUSION: The phytochemical study of butanol fraction of Albizia lebbeck (L.) Benth flowers was carried out and led to isolation and characterization of three new compounds, lebbeckanin I (1), lebbeckanin II (2), and a new isomer of methyl inositol, D-1-O-methyl-cis-inositol (3), by using different spectroscopic methods. Furthermore, the biological activity of fraction containing mixture of compounds 1 and 2 exhibited strong cytotoxic and antimicrobial activity, therefore it could be considered as a promising source for new cytotoxic and antimicrobial drugs. 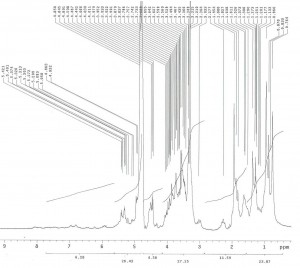 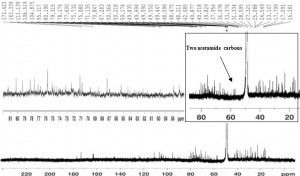 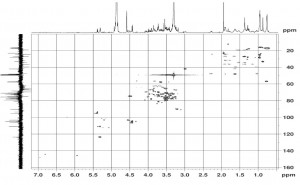 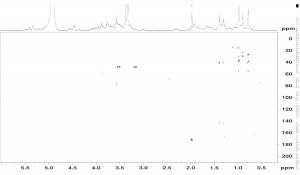 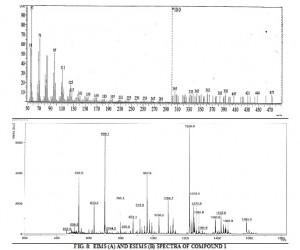 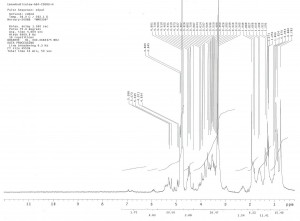 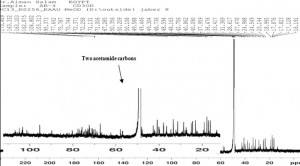 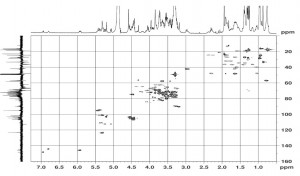 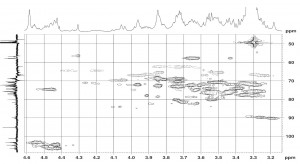 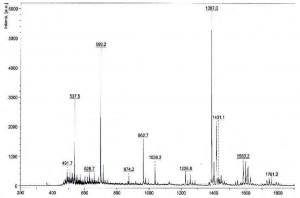 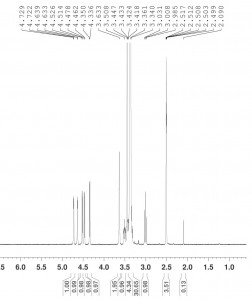 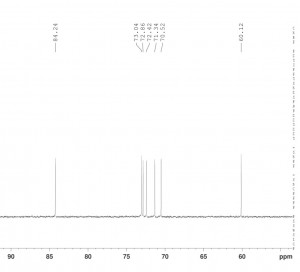 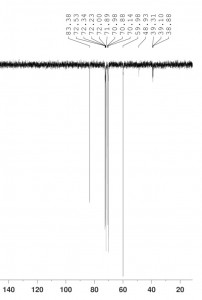 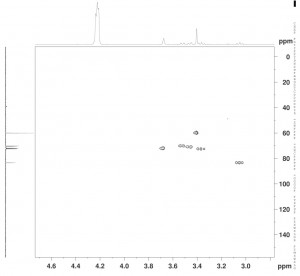 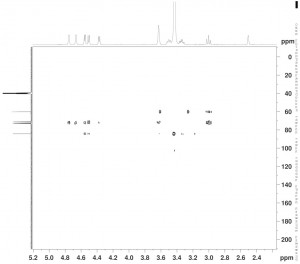 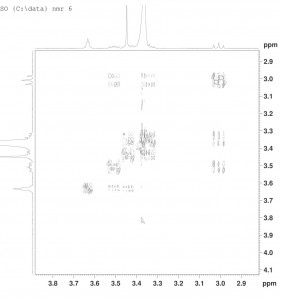 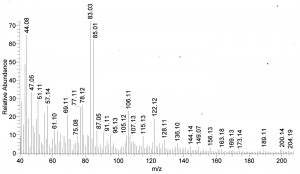