A new, selective and sensitive visible spectrophotometric method has been developed for the estimation of Ketorolac tromethamine in bulk and pharmaceutical preparations.  The method is based on the reaction of ketorolac tromethamine with 2, 3-dichloro-5, 6-dicyano-1, 4-benzquinone (DDQ) to form red color charge–transfer complex with a λmax. 460nm extracted in methanol. Beer’s law is obeyed in the concentration range of 50 to 250µg/ml for the method.  The method is extended to pharmaceutical formulations and there was no interference from any common pharmaceutical excipients and diluents.  The result of analysis has been validated statistically and by recovery studies.

The compound shows potent prostaglandin cyclo-oxygenase inhibitory activity. The agent elicited mild CNS and cardiovascular activity only at doses far in excess of those required for analgesic and anti-inflammatory activity. A single 10 mg tablet given orally to human volunteers following surgery provided pain relief equivalent to that provided by 10 mg of morphine given intramuscularly.

Ketorolac, when administered intramuscularly or orally, is a safe and effective analgesic agent for the short-term management of acute postoperative pain and can be used as an alternative to opioid therapy is available as round, white, film-coated, red-printed tablets. Each tablet contains 10 mg Ketorolac tromethamine, the active ingredient, with added lactose, magnesium stearate and microcrystalline cellulose. The white film-coating contains hydroxyl propyl methylcellulose, polyethylene glycol and titanium dioxide. It is freely soluble in methanol.

In this method the drug having an aromatic secondary or tertiary amino group or aromatic phenolic group or alkoxy group reacts with DDQ i.e (2,3-dichloro 5,6-dicyano 1, 4-benzoquinone) to form colored charge transfer complex.

The resultant charge transfer complex in methanol is formed from donor-acceptor mechanism of Lewis acid-base reaction between the ketorolac tromethamine and DDQ chemical constituents. The transfer of an electron pair from donor to acceptor is readily possible during charge transfer phenomenon.

In charge transfer complex phenomenon Ketorolac tromethamine acts as electron pair donors and DDQ acts as electron pair acceptor due to presence of strong electron withdrawing cyano group. The π electron pairs are transferred from drug as π-donor to DDQ as a π-acceptor. The solvents like methanol, acetonitrile, being polar solvents facilitates the complete transfer of charge from donor to acceptor with the formation of radical an ion as the predominant chromogen.

Experimental: All spectral measurements were made on MAPADA double beam UV-Visible 1600 Spectro-photometer.

1 ml of ketorolac tromethamine solution (100 µg/ml) is transferred into a standard flask. To this solution 3.0 ml of DDQ reagent is added to form red color solution. The final volume is brought to 10 ml with methanol. The resultant solution is well mixed and allowed to stand for 5 min for complete the reaction. The absorbance of the red color solution is measured in the wavelength range of 400 to 550 nm, against the reagent blank. The spectrum is given in fig. 1. 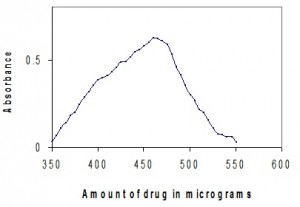 From fig. 1, it is clear that the ketorolac tromethamine drug treated with DDQ solution has maximum absorbance at 460 nm. Hence, all further studies are made at 460 nm.

Assay Procedure: To study the effect of drug concentration on the absorbance of the charge-transfer complex under optimal conditions now arrived is studied by the following method to know the suitability of the method for the assay of ketorolac tromethamine.

Various aliquots of the standard ketorolac tromethamine solution ranging from 0.5-2.5 ml are transferred into a series of standard flasks. To each flask, 3.0 ml of DDQ solution is added. The final volume is brought to 10 ml with methanol. The reaction mixture in each flask is well shaken and allowed to stand for 5 min to complete the reaction. The absorbance of the red color solution is measured at 465 nm, against the reagent blank prepared in similar manner omitting drug solution. 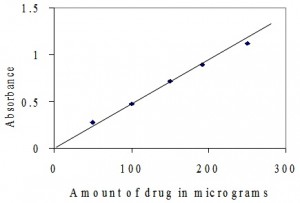 Assay of ketorolac tromethamine in pharmaceutical formulations: The method is then applied to the determination of the drug from the marketed tablet formulations. Tablets are weighed and contents are powdered and well mixed. The powder equivalent to 50 mg of pragabalin is dissolved in methanol, filtered, residue is washed with methanol and the volume is made upto 50 ml with methanol. Further dilution is made as described in the preparation of standard solution of ketorolac tromethamine. Further analysis is carried out as per procedure described above and results are summarized in Table 1. The amount of drug present in the sample is estimated from calibration graph.

*Average of five determinations based on label claim

RESULTS AND DISCUSSION: In this method the drug react with DDQ solution to form red colored charge complex. The red colored charge complex solution formed is measured at 465 nm against reagent blank. The amount of drug read from calibration curve. The calibration curve is linear over the range of 50-250 μg/ml of ketorolac tromethamine. The values of Standard deviation, coefficient of variation values and tcal are shown in Table 1. The values of standard deviation and coefficient of variation values are low, indicates high accuracy and reproducibility of the method. The data of assay values of commercial formulations is subjected to statistical evaluation for student ‘t’ test to study the proposed method. The calculated ‘t’ values are less than ‘t’ theoretical values with 4 (n-1= 5-1) degrees of freedom at 5% level of significance indicate that there is no significant difference between proposed method and standard method.

The proposed method is found to be simple, precise, accurate and time saving, reproducible and can be conveniently adopted for routine analysis of estimation of ketorelac tromethamine in bulk drugs samples and pharmaceutical formulations.