INTRODUCTION: Cancer is one of the leading causes of death worldwide. Lung, liver, colorectal and breast cancer are the biggest causes of cancer deaths every year 1. Indonesian plants "tapak liman" known as the scientific name Elephantopus scaber Linn. is one of the potential plants developed as anticancer 2. This plant extract was reported to increase apoptosis and inhibit multi-drug resistance transporters in human epithelial cancer cells 3. Active metabolites which are widely reported to be anticancer activities are deoxyelephantopin and isodeoxyelephantopin, a compound group of sesquiterpene lactone 4, 5.

DEO suppresses NFκβ activation by preventing the localization of NFkβ/P65 and blocking the formation of P65-DNA complexes in the TNFα element binding regions through the 16th hydrogen carbonyl bond with Lys 122 NFkβ receptor residues 14. This complex interaction is, as yet, poorly understood and the degree of NFκβ inhibition has yet to be quantified. In order to begin to address this gap, the authors have developed a model to predict the quantitative value of DEO and IDEO inhibition activity on NFkβ using QSAR and reference data from in-vitro studies of a number of sesquiterpenes lactone compounds that have been carried out by Villagomez et al. 15 The results of these predictions were then confirmed by molecular docking methods using MOE software.

Data Sets and Biological Activity: The sample used in this study is 10 analogs of NfkB inhibiting sesquiterpene lactone compounds synthesized by Villagomez, et al. 15 Fig. 1 and Table 1 shows the structure and IC50 of the compounds used. From 10 compounds, 5 compounds (sql_1, sql_2, sql_4, sql_10 and sql_15) used as data sets. The Others were removed because they have z-score > 2.5. The biological data obtained as IC50 were converted to pIC50 (-logIC50) values and used as dependent variables in the QSAR analysis. 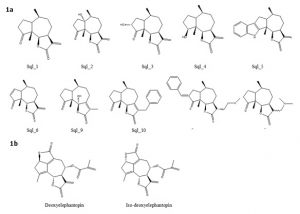 QSAR: The data sets  used to build the 2D and 3D structures of the QSAR equation building compound were generated using "Chemoffice 2002" software and saved in pdb format, while the structure of the DEO compound and its isomer IDEO were downloaded via PubChem in sdf format, then converted to a pdb format with "Open Babel" software. They were then optimized using the default system of MOE. Descriptor value calculations are also performed using MOE with 13 type descriptors selected which represented electronic, steric and hydrophobic parameters.

The QSAR model was built using the QuaSar-Model protocol available in the MOE software. The QSAR equation model obtained was validated using a leave one out cross validation technique (LOO) with cross-validation coefficient Q2. According to Tropsha, 16 a QSAR model can be considered good if cross-validation Q2 > 0.5.

Molecular Docking: The interaction between NFkB/P65 (receptor) and the sesquiterpenes of lactone (ligands) was studied using molecular docking using MOE software. The parameters observed were the change in free energy (ΔG) and the number of hydrogen bonds formed between the ligand with the receptor. All ligands and receptor were optimized by adding protons and conducting energy minimization processes. The docking process was performed on the binding site indicated by the default MOE system search results. The docking results were then visualized using LigPlot MOE for 2D structures and PyMOL for 3D structures.

We calculated the z-score of each compound from the initial QSAR model generated equation and if z- score was > 2.5 then that compound was excluded and a new QSAR equation created. Five sesquiterpen lactone compounds with z- score < 2.5 were used to build the QSAR model. The mathematical form of the resulting QSAR equation is shown in the equation and below,

FIG. 2: SHOWS A GRAPH OF THE RELATIONSHIP BETWEEN THE pIC50 PREDICTED VALUES AND THE EXPERIMENTAL VALUES

The descriptors that have the most influence on IC50 values ​are AM1_E and AM1_Eele. The values of AM1_E and AM1_Eele for deoxyelephantopin and isodeoxyelephantopin are from 1.2x to 2x greater than for the sesquiterpene lactone compounds used to build the QSAR model.  These higher values are due to DEO and IDEO having larger structures containing 2 lactone rings attached to the core while the compounds used to construct the QSAR equation have only one.

One of the QSAR equation building compounds (sql_10) has a relatively large structure that has an additional substituent of one benzene ring, so the values of AM1_E and AM1_Eele are almost identical to DEO.

This compound has an experimental pIC50 of -1.8808 (IC50 76 μM). In contrast, the sql_1 compound has a simpler structure, having a lower experimental pIC50 of -0.8573 (IC50 7.2μM). The larger the structure of the sesquiterpene lactone compound the larger the AM1_E and AM1_Eele values and hence the larger the IC50 values and the weaker the potential for inhibition of NFkβ. Furthermore, descriptors that have large coefficients such as ASA_H, and AM1_HF also affect IC50 values. A large ASA_H value causes an increase in the IC50 value. Conversely, a large AM1_HF value causes a decrease in IC50 value.

TABLE 5: THE RESULT OF DOCKING ANALYSIS OF ALL LIGANDS

FIG. 3A: THE INTERACTION OF LIGANDS 2D AND 3D “DEOXYELEPHANTOPIN

FIG. 3B: 2D AND 3D ISODEOXYELEPHANTOPIN” ON RECEPTOR NFKB

The results of the docking scores for all compounds show they have an affinity for NFkβ/P65 receptors (PDB ID: INF1). All showed a tendency to release energy when forming a complex with NFkβ/P65 receptors, but the strength of each affinity is different. The more negative the value of the docking score obtained the stronger the affinity with the receptor. The sql_1 and sql_2 compounds exhibit the strongest affinity with docking scores of -10.1669 kcal/mol and -10,765 kcal/mol respectively. In contrast, DEO and isomer IDEO have weaker affinity with docking scores of -9.5318 kcal/mol and -8.4429 kcal/mol. However, all compounds used to build the QSAR model formed hydrogen bonds between the 16th carbonyl group and the Lys 122 residual N atom receptor when interacting with the receptors.

This preliminary bond is a pre-requisite for inhibitory activity against NFkβ where it is able to block nuclear translocation of P65 and DNA-binding elements from TNFα.14 The interaction models for DEO and IDEO are visualized in 2D and 3D in Fig. 4a and 4b.

Both these in-silico analysis methods (QSAR and Docking) are similar and support each other. QSAR equation predictions indicate sql_1 and sql_2 should strong inhibitory activity against Nfkβ. This has also been verified experimentally 15. Likewise, the docking score of these two compounds shows they will have a stronger affinity for the NFkβ/P65 receptor than DEO and IDEO. However, the docking scores of DEO and IDEO also exhibit significant inhibitory activity against NFkβ.

CONCLUSION: QSAR and Molecular Docking methods confirm that DEO and its isomer IDEO have the potential to inhibit NFkβ activity. These results suggest that study is warranted to further investigate the properties of these compounds sourced from Elephantopus scaber L. (Asteraceae) and its potential as a natural source for a novel affordable cancer drug that would be accessible in the developing world.

ACKNOWLEDGEMENT: The authors would like to thank Dr. Hirowati Ali PhD and team, for their support during this study.

CONFLICT OF INTEREST: The authors have declared that there is no conflict of interest associated with this publication.