ABSTRACT: The confined reports on Rhododendron arboreum Sm spp. nilagiricum (Zenker) Tagg stimulated to examine the bioactive compounds and the antimicrobial activity of its flower and bark extracts against medically critical human pathogenic microbes, apart from the availability of several reports on its main species R. arboreum. The microbial strains used for the study were four bacterial (Streptococcus pyogene, Staphylococcus aureus, Escherichia coli, Klebsiella pneumoniae) and two fungal (Candida albicans and Trichoderma viride) strains. Agar well diffusion method is applied to assess the antimicrobial activity of the aqueous and methanol extracts of the plant sample. Various fractions of aqueous, ethanol, methanol and chloroform extracts confirmed the presence of alkaloids, phenols, flavanoids, tannins, saponins, terpenoids, steroids, carbohydrates, glycosides, amino acids and proteins. The methanol extract of flower revealed a promising antibacterial and antifungal activity against S. aureus and K. pneumoniae respectively. This study shows a broad and great therapeutic potential of the plant extract. However further studies are necessary for this potent plant extracts to evaluate the other parameters of antimicrobial efficacy.

INTRODUCTION: Since ancient times, the nature particularly plants have been explored in several ways in search of new drugs to treat various ailments. This search resulted in isolation of impressive number of modern drugs from the natural sources. Medicinal plants continue to be an important therapeutic aid for alleviating ailments of humankind. Search for eternal health and longevity and to seek remedy to relieve pain and discomfort prompted the early man to explore his immediate natural surrounding and tried many plants, animal products and minerals and developed a variety of therapeutic agents.

Since the typical diseases like cancer and viral type are concentrated by large pharmaceutical companies, the third world researchers could focus on the parasitic diseases which is an important problem among human.

High altitude medicinal plants are used worldwide in both traditional and Western medicine systems. India is known for its vast biological diversity and knowledge rich ancient traditional systems of medicine, which provides a strong base for utilization of a large number of plants in general health care.

The high altitude ecosystem is considered to be hotspots of medicinal plant diversity and is most neglected regions for research in view of their inaccessibility and harsh climatic conditions. In a survey, it was found that only 20% high altitude medicinal plants are used in Indian drug trade which is collected from wild sources 1.

The Nilgiri Rhododendron (Rhododendron arboreum Sm spp. nilagiricum(Zenker) (Tagg)) is an interesting species of the genus Rhododendron which is a member of the plant family Ericaceae. It is endemic to the Southern Western Ghats of peninsular India 2. It is a tree species up to 10m tall with bark brownish, fissured and pinkish blaze. Crimson red bell-shaped flowers are borne in fascicles or pseudocorymbs at branch ends. It has ecological significance and economical importance in addition to its graceful flowers. The genus has been reported to be effective as astringent, diuretic, choleretic, antispasmodic, chronic eczema, diarrhea, dysentery, anti-irritable bowel syndrome therapy 3.

A review of the literature revealed that the flowers of R. arboreum showed antidiabetic, anti-hyperlipidimic, anti-inflammatory and anti-nociceptive activities and an active compound (Hyperine) 4. The phytochemical analysis carried out on the flowers of R. arboreum Sm spp. nilagiricum (Zenker) Tagg showed the presence of phenols, saponins, steroids, tannin, xanthoprotein and coumarin 5. The methanolic extract of the flowers had potent antiglycation potential in rats and has potent antioxidant property 6.

Presently, spread of multidrug-resistant microbial pathogens has threatened the current antimicrobial therapy. The most problematic human bacterial pathogens include Escherichia coli, Klebsiella pneumonia, Enterobacterium, Pseudomonas aeruginosa, Staphylococcus aureus, etc. and fungal pathogens such as Candida albicans, Trichoderma viride, etc 7. Thus, effective newer antimicrobials are urgently required to treat or inhibit the growth of these human pathogens. The influence of various plant extracts on several diseases are observed to be a promising remedies since ancient time in Chinese medicine, Ayurveda, Arabic, and Unani medicine 8. Plants used in the traditional medicine contains a wide range of bioactive compounds that can be used to treat infectious diseases. The most important of these bioactive compounds of plants are alkaloids, flavanoids, tannins and phenols 9.

Considering all the above facts, the present study was conducted to screen the bioactive chemical compounds and to assess the antimicrobial activity of flower and bark of R. arboreum Sm spp. nilagiricum – an endemic representative of Western Ghats.

Collection of plant material: Plant material was collected from The Nilgiris, Tamilnadu, India, in January, 2015, authenticated by taxonomist at the Department of Botany, Government Arts College, Ooty. Documentation of the plant specimen is made and deposited in the department herbaria.

Preparation of plant extracts: The aerial parts of the plant were air dried under shade for three weeks. The dried plant material (flower) was pulverized by a mechanical grinder, sieved through 40 mesh. To perform the phytochemical screening, various aqueous, ethanol, methanol and chloroform extracts of the plant sample was prepared. Simultaneously, aqueous and methanol extracts was prepared to assess the antimicrobial activity of the plant sample.

Preparation of Inoculum: The test organisms used were clinical isolates viz., Streptococcus pyogene, Staphylococcus aureus, Escherichia coli, Klebsiella pneumonia. Also the fungal pathogens Candida albicans and Trichoderma viride which were obtained from Department of microbiology, Hindustan college of arts and science, Coimbatore. The bacterial and fungal cultures were maintained on nutrient agar medium and potato dextrose agar (PDA) medium respectively. The bacterial strains were pre-cultured in nutrient broth overnight in a rotary shaker at 37⁰ C, centrifuged at 10,000 rpm for 5 minutes. Pellets was suspended in double distilled water and the cell density was standardized spectrophotometrically (A610 nm).

The fungal inoculums were prepared from 5 to 10 days old culture grown on potato dextrose agar medium. The Petri dishes were flooded with 8 to 10ml of distilled water and conidia were scraped using sterile spatula. The spore density of each fungus was adjusted with spectrophotometer (A595 nm) to obtain a final concentration of approximately 105 spores per ml. The composition of Nutrient Agar medium(g/L) is Beef  extract : 3g;  Peptone : 5g;  Agar : 15g  and  distilled  water : 1000ml;  PH : 7.  Similarly the composition of PDA medium is potato: 200g;  dextrose: 20g;  Agar : 15g  and  distilled  water : 1000ml;  PH : 6.2.

Antimicrobial testing: Antibacterial activity was determined by agar-well diffusion method 10 with modifications according to the present experimental conditions. The test microorganisms were seeded into respective medium by spread plate method 10µl(10 cells/ml) with the 24 hours cultures of bacterial growth in nutrient broth. After solidification, the filter paper wells (5mm in diameter) impregnated with the extracts were placed on test organism – seeded plates. Chloramphenicol (10µg) used as standard for antibacterial test. The antibacterial assay plates were incubated at 37⁰C for 24 hours.

Antifungal activity was also determined by agar-well diffusion method 11. The potato dextrose agar plates were inoculated with each fungal culture by point inoculation. The filter paper wells(5mm  in  diameter) impregnated with the extracts were placed on test organism–seeded plates. Chloramphenicol(10µg) used as positive control. The activity was determined after 72 hours of incubation at 28⁰ C. The diameters of the inhibition zones were measured in mm. The experiments were performed in triplicates and results were presented as mean ±SD(Standard deviation). The significance in the difference of mean was determined according to Duncan’s multiple range test.

RESULTS AND DISCUSSIONS: Although most bacteria are harmless or often beneficial, several are pathogenic. Pathogenic bacteria contribute to other globally important diseases such as pneumonia, which can be caused by bacteria such as Streptococcus and Pseudomonas. Streptococcus and Staphylococcus are part of the normal skin microbiota and typically reside on healthy skin or in nasopharangeal region. Some bacteria such as E.coli can induce host epithelial cells to engulf them in a process resembling phagocytosis 12. In the present study it is cleared that all the fractions of R. arboreum showed statistically significant antibacterial activity against E.coli, K. pneumonia, S. aureus and S. pyogene as shown in Table 1.

include dermatophytosis and candidiasis caused by various dermatophytes and candida albicans while systemic mycotic infections include aspergillosis, cryptococcosis, histoplasmosis, sporotrichosis etc 14. Antifungal activity of aqueous and methanol extracts were tested against C.albicans and T. viride while chloramphenicol was used as a standard. In the present study it is cleared that all the fractions of R. arboreum showed statistically significant antifungal activity as shown in Table 2.

Successive extraction and isolation of botanical compounds from plant material is largely dependent on the type of solvent used in the extraction procedure. The traditional healers use primarily water as the solvent but we found in the present study that the plant extracts by alcohol(methanol) provided more consistent antimicrobial activity compared to those extracted by water. The higher antimicrobial activity of methanol extract might be due to its high degree of solubility of active constituents in methanol 15. The qualitative analyses of phytochemicals present in the flower extracts are presented in Table 3. The result confirmed the presence of alkaloids, phenols, flavanoids, tannins, saponins, terpenoids, steroids, carbohydrates, glycosides, amino acids and proteins in the flower extracts.

CA- Candida albicans, TV-Trichoderma viride; the superscripts (a and b) indicates higher to lower inhibition zone. 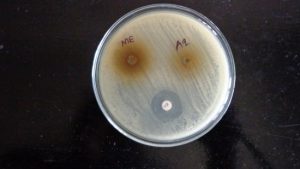 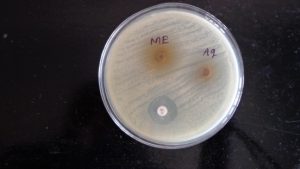 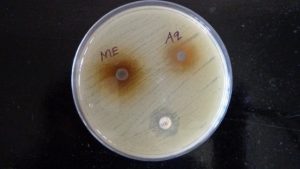 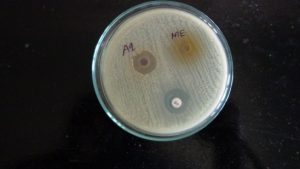 FIG. 1: THE AQUEOUS AND METHANOL EXTRACT OF LEAF OF R. ARBOREUM SPP. NILAGIRICUM SHOWING THE ZONE OF INHIBITION AGAINST 4 BACTERIAL STRAINS

The high potency of the extracts against bacterial strains shows its scientific basis for its uses in traditional medicine in the treatment of different types of cough, diarrhea and dysentery. These antibacterial activity are likely due to the presence of the secondary metabolites present in the extract. Flavanoids which recently reported to have antimicrobial activity include quercetin 3'-O-glucoside, rutin 16, coumestrol, genistein and daidzein 17, morin18, etc. It has also been shown that saponins are active antifungal agents. Tannins are also known antimicrobial agents. Tannins (commonly referred to as tannic acid) are water-soluble polyphenols that are present in many plant foods. Tannins are water soluble plant polyphenols that precipitate proteins. Tannins have been reported to prevent the development of microorganisms by precipitating microbial protein and making nutritional proteins unavailable for them 19. The growth of many fungi, yeasts, bacteria, and viruses was inhibited by tannins 20. The secondary metabolites identified in R. arboreum Sm spp. nilagiricum could be responsible for antimicrobial activity exhibited by this plant. 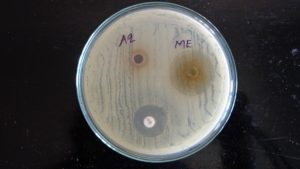 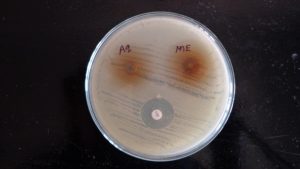 FIG. 2: THE AQUEOUS AND METHANOL EXTRACT OF FLOWER OF R. ARBOREUM SPP. NILAGIRICUM SHOWING THE ZONE OF INHIBITION AGAINST 2 FUNGAL STRAINS

CONCLUSION: It  may, therefore be concluded that the phytochemical screening of flower of R. arboreum Sm spp. nilagiricum confirmed the presence of major bioactive compounds which could be responsible for the significant degree of  antimicrobial activity against the studied human pathogenic bacterial and fungal strains. The methanol extracts showed a promising antimicrobial activity compared to aqueous extracts of the plant sample. From the above findings, it could be suggested that further studies are necessary for this potent plant extracts to evaluate the other parameters of antimicrobial efficacy which could then be utilized to develop a broad spectrum antimicrobial herbal formulation with this plant.