Niosomes are self assembled vesicles composed primarily of synthetic surfactants and cholesterol. They are analogous in structure to the more widely studied liposomes formed from biologically derived phospholipids. Niosomes represent an emerging class of novel vesicular systems. Niosome formation requires the presence of a particular class of amphiphile and aqueous solvent. In recent years a comprehensive research carried over niosome as a drug carrier. Various drugs are enlisted and tried in niosome surfactant vesicles. Niosomes proved to be a promising drug carrier and has potential to reduce the side effects of drugs and increased therapeutic effectiveness in various diseases.

INTRODUCTION: Niosomes are lamellar structures that are microscopic in size. They constitute of non-ionic surfactant of the alkyl or dialkyl polyglycerol ether class and cholesterol with subsequent hydration in aqueous media. The surfactant molecules tend to orient themselves in such a way that the hydrophilic ends of the non-ionic surfactant point outwards, while the hydrophobic ends face each other to form the bilayer. Controlled release drug products are often formulated to permit the establishment and maintenance of any concentration at target site for longer intervals of time. One such technique of drug targeting is niosomes. Niosomes are microscopic lamellar structures formed on admixture of a nonionic surfactant, cholesterol and diethyl ether with subsequent hydration in aqueous media. They behave in vivo like liposomes prolonging the circulation of entrapped drug and altering its organ distribution 1.

Niosomal drug delivery has been studied using various methods of administration 2 including intramuscular 3, intravenous 4, peroral and transdermal 5, 6. In addition, as drug delivery vesicles, niosomes have been shown to enhance absorption of some drugs across cell membranes 7, to localize in targeted organs 8 and tissues and to elude the reticuloendothelial system. Niosomes has been used to encapsulate colchicines 9, estradiol 10, tretinoin 11-12, dithranol 13-14, enoxacin 15 and for application such as anticancer, anti-tubercular, anti-leishmanial, anti-inflammatory, hormonal drugs and oral vaccine 16-25. 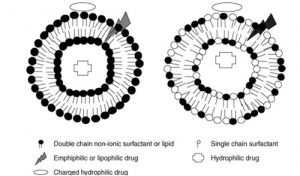 Non-ionic surfactant structure: Theoretically niosome formation requires the presence of a particular class of amphiphile and aqueous solvent. In certain cases cholesterol is required in the formulation and vesicle aggregation for example may be prevented by the inclusion of molecules that stabilize the system against the formation of aggregates by repulsive steric or electrostatic effects. An example of steric stabilisation is the inclusion of Solulan C24 (a cholesteryl poly-24-oxyethylene ether) in doxorubicin (DOX) sorbitan monostearate (Span 60) niosome formulations. An example of electrostatic stabilization is the inclusion of dicetyl phosphate in 5(6)-carboxyfluorescein (CF) loaded Span 60 based niosomes 26.

Nature of the encapsulated drug: Another factor often overlooked is the influence of an amphiphilic drug on vesicle formation, when encapsulation of the amphipathic drug DOX was attempted. A steric stabilizer Solulan C24 (poly-24-oxyethylene cholesteryl ether) must be added to the formulation to ensure a homogenous formulation devoid of aggregates. DOX has been shown to alter the electrophoretic mobility of hexadecyl diglycerol ether (C16G2) niosomes in a pH dependent manner, an indication that the amphipathic drug is incorporated in the vesicle membrane. 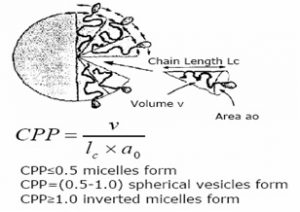 Methods of preparation of Niosomes:

Entrapment efficiency: After preparing niosomal dispersion, unentrapped drug is separated by dialysis 27 centrifugation 28-30 or gel filtration as described above and the drug remained entrapped in niosomes is determined by complete vesicle disruption using 50% n-propanol or 0.1% Triton X-100 and analyzing the resultant solution by appropriate assay method for the drug. Where,

Vesicle diameter: Niosomes, similar to liposomes, assume spherical shape and so their diameter can be determined using light microscopy, photon correlation microscopy and freeze fracture electron microscopy. Freeze thawing [13] (keeping vesicles suspension at –20°C for 24 hrs and then heating to ambient temperature) of niosomes increases the vesicle diameter, which might be attributed to fusion of vesicles during the cycle.

In-vitro release: A method of in-vitro release rate study includes the use of dialysis tubing. A dialysis sac is washed and soaked in distilled water. The vesicle suspension is pipetted into a bag made up of the tubing and sealed. The bag containing the vesicles is placed in 200 ml of buffer solution in a 250 ml beaker with constant shaking at 25°C or 37°C. At various time intervals, the buffer is analyzed for the drug content by an appropriate assay method 28-30.

Therapeutic And Medical Applications Of Niosomes: Niosomal drug delivery has been studied using various methods of administration including intramuscular, intravenous, peroral, and transdermal. In addition, as drug delivery vesicles, niosomes have been shown to enhance absorption of some drugs across cell membranes, to localize in targeted organs and tissues, and to elude the reticuloendothelial system

Sustained Release and Localized Drug Action of niosomes: Sustained release action of niosomes can be applied to drugs with low therapeutic index and low water solubility since those could be maintained in the circulation via niosomal encapsulation. The evolution of niosome drug delivery technology has shown promise in cancer chemotherapy and anti-leishmanial therapy

Doxorubicin: Tumoricidal activity was increased with different DOX niosome formulations as measured by decreased proliferation of the S180 sarcoma in NMRI mice and terminal mean tumour weight of a MAC 15A tumour in NMRI mice .However studies involving a human lung or human ovarian xenograft revealed that in these latter models niosomal formulations had no advantage over the free drug.

Anti infective agents: Niosomes can be used for targeting of drug in the treatment of diseases in which the infecting organism resides in the organ of reticuloendothelial system. Leishmaniasis is such a disease in which parasite invades cells of liver and spleen. The commonly prescribed drugs are antimonials, which are related to arsenic, and at high concentration they damage the heart, liver and kidney.

Diclofenac Sodium: Diclofenac sodium noisome reportedly prepared from polysorbate 60, cholesterol and DCP (22:73:5) & 3 μ m in size were found to reduce the inflammation in rats with carrageen induced paw edema on intraperitoneal administration to a greater extent than the free drug. This increase in activity is a direct result of an observed increase in the area under the plasma time curve 33.

Diagnostic imaging with Niosomes: Niosomes are considered as a carrier of iobitridol, a diagnostic agent for X-ray imaging. The noisome prepared using the film hydration method followed by sonication. Method allows the increasing encapsulation and the stability of vesicles were carried out 34.

Ophthalmic drug delivery: A single study reports on the biological evaluation of a niosomal drug delivery system for ophthalmic delivery. Cyclopentolate was encapsulated within niosomes prepared from polysorbate 20 and cholesterol and found to penetrate the cornea in a pH dependant manner within these niosomes.  Permeation of cyclopentolate increased at pH 5.5 but decreased at pH 7.4. Contrary to these findings, in vivo there was increased mydriatic response with the niosomal formulation irrespective of the pH of the formulation It is concluded that the increased absorption of cyclopentolate may be due to the altered permeability characteristics of the conjunctival and sclera membranes. Additionally discomes have been proposed as ophthalmic drug delivery agents35

Niosomes as immunological adjuvants: Niosomes have been used for studying the nature of the immune response provoked by antigens. Brewer and Alexander have reported niosomes as potent adjuvant in terms of immunological selectivity, low toxicity and stability 37.

Niosomes as transdermal drug delivery: Slow penetration of drug through skin is the major drawback of transdermal route of delivery. An increase in the penetration rate has been achieved by transdermal delivery of drug incorporated in niosomes Jayraman et al 38 has studied the topical delivery of erythromycin from various formulations including niosomes or hairless mouse. From the studies, and confocal microscopy, it was seen that non-ionic vesicles could be formulated to target pilosebaceous glands. due to poor skin permeability, liposomes and niosomes could not be successfully used for systemic drug delivery and their use was limited for topical use recently introduced two new vesicular carrier systems transfersomes and ethosomes, respectively for non-invasive delivery of drugs into or across the skin.

Transfersomes and ethosomes incorporated edge activators (surfactants) and penetration enhancers (alcohols and polyols), respectively, to influence the properties of vesicles and stratum corneum The ethosomes are vesicular carrier comprise of hydroalcoholic or hydro/alcoholic/glycolic phospholipid in which the concentration of alcohols or their combination is relatively high. Typically, ethosomes may contain phospholipids with various chemical structures like phosphatidylcholine (PC), hydrogenated phosphatidic acid (PA), phosphatidylserine (PS), Such a composition enables delivery of high concentration of active ingredients through skin. Transfersomes are chemically unstable because of their predisposition to oxidative degradation, lack of purity of the natural phospholipids comes in the way of adoption of transfersomes as drug delivery vehicles and Transfersomes formulations are expensive to prepare. The limitations of transfersomes can be overcome by the "pharmacosome" approach. The prodrug conjoins hydrophilic and lipophilic properties, and therefore acquires amphiphilic characters, and similar to other vesicle forming components, was found to reduce interfacial tension, and at higher concentrations exhibits mesomorphic behavior.

CONCLUSION: The concept of incorporating the drug into niosomes for a better targeting of the drug at appropriate tissue destination is widely accepted by researchers and academicians. Niosomes represent promising drug delivery systems. They present a structure similar to liposome and hence they can represent alternative vesicular systems with respect to liposomes, due to the niosome ability to encapsulate different type of drugs within their multienvironmental structure. Niosomes are thought to be better candidates drug delivery as compared to liposomes due to various factors like cost, stability etc. Niosomes have been proven to be useful in the delivery of anti-infective agents, anti-cancer agents anti-inflammatory agents, fairly recently as vaccine adjuvants and as diagnostic imaging agents. All this is supremely encouraging.