Gene transfer represents a relatively new way for the treatment of rare genetic disorders by changing the expression of a person's genes. Electroporation is a mechanical method of gene transfer used to introduce polar molecules such as DNA, RNA and Peptides (Heparin, Insulin) into a host cell through the cell membrane. In this procedure, a large electric pulse temporarily disturbs the phospholipid bilayer, allowing molecules like DNA to pass into the cell. With careful control of the strength of the electrical field and the duration of the cell's exposure to it, the pores will reseal themselves after a short period of time. There are nine ways for gene transfer: 1. Electroporation; 2. Lipid mediated method; 3. Chemical mediated gene transfer; 4. Microinjection; 5. Biolistics; 6. Viral vectors; 7. Transformation; 8. Conjunction; 9. Gene Transfection enhanced by elevated temperature. Among a number of techniques using lipid, viruses or specialty reagents may be cytotoxic, labor intensive and costly while, Electroporation is a simple, inexpensive, safe, non toxic and non viral method. The application of electroporation to enhance transdermal delivery has opened up a new possibility to introduce larger molecules such as peptide hormones and vaccines as well as minigenes and RNAi etc. This review describes the method by which polar molecules are delivered to the cells. Other important issues such as the instrumentation, advantages and application of Electroporation are also addressed. Electroporation is non destructive method of gene and drug delivery.

Electroporation involves a pulse of high voltage applied to protoplasts/cells/ tissues to make transient (temporary) pores in the plasma membrane which facilitates the uptake of Foreign DNA. The cells are placed in a solution containing DNA and subjected to electrical shocks to cause holes in the membranes. The foreign DNA fragments enter through the holes in to the cytoplasm and then to nucleus. It is also known as electropermeabilization. The phenomenon of electropermeabilization of cell membranes has been known for several decades, and has recently received increasing attention for the manipulation of cells and tissues l-7. Very early observations suggested that some type of “electrical breakdown” might occur in electrically stimulated membranes 8.

The stratum corneum (SC), the outermost layer of the skin, is the main barrier to transdermal transport. Electroporation has been used to deliver drugs and other molecules across the skin. The electrical resistance of the SC is between 5 and 25 kV/cm2 9 and has an electrical breakdown potential around 75–100 V 10. The molecular weight cutoff has determined, using FITC-dextrans, to be around 10 kDa 11, 12.

Mechanism: Electroporation allows cellular introduction of large highly charged molecules such as DNA which would never passively diffuse across the hydrophobic bilayer core 13. Electroporation is a multi-step process with several distinct phases 14. First, a short electrical pulse must be applied. Typical parameters would be 300-400 mV for < 1 ms across the membrane. Upon application of this potential the membrane charges like a capacitor through the migration of ions from the surrounding solution. With careful control of the strength of the electrical field and the duration of the cell's exposure to it, the pores will reseal themselves after a short period of time (Figure 1, 2).

Instruments and Working Principle: Electroporation is based upon the use of short electrical impulses of high field strength. These impulses increase the permeability of cell membrane and facilitate entry of DNA molecules in to the cells, if the DNA is in direct contact with the membrane. The electroporation pulse is generated by discharging a capacitor across the electrodes in a specially designed electroporation chamber.Either a high voltage (1.5 kV) rectangular wave pulse of short duration or a low voltage (350V) pulse of long duration is used. The host cells and the molecules to be inserted into these cells are suspended in solution. When the first switch is closed, the capacitor charges up and stores a high voltage. 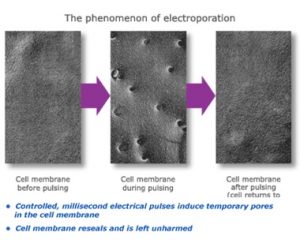 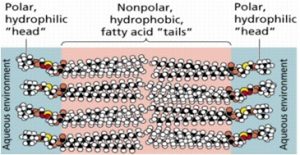 FIG. 2: DIAGRAM OF THE PHOSPHOLIPID BILAYER

When the second switch is closed, this voltage discharges through the liquid of the cell suspension. Typically, 10,000-100,000 V/cm (varying with cell size) in a pulse lasting a few microseconds to a millisecond is necessary for electroporation. This electric pulse disturbs the phospholipid bilayer of the membrane and causes the formation of temporary aqueous pores. The electric pulses have two roles, to permeabilize the target cell plasma membrane and to transport the DNA towards or across the permeabilized membrane by electrophoresis. For efficient transfer, reversible undamaging target cell permeabilization is mandatory. There are essentially six major electroporation instruments from different companies presently on the market that are specifically designed to introduce macromolecules into cells. Such companies are Bio-Rad, BRL, Hoefer, BTX, Baekon, and Promega. The electroporation system designed by Promega is based on capacitor discharge. 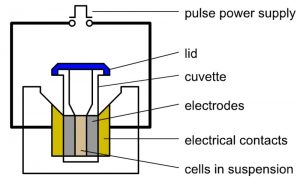 FIG. 3:  DIAGRAM OF THE BASIC CIRCUIT SETUP OF THE ELECTROPORATION APPARATUS 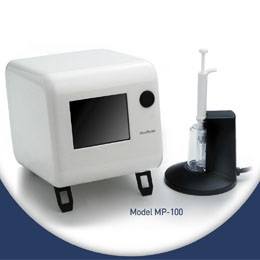 Application: The first biological use of electroporation--the formation of holes or pores in the cell membrane by high-voltage electric shock--was to induce cells to fuse via their plasma membranes. It was then found that the electropores could be used to introduce macromolecules into cells 15-18. Electroporation can be used in many area of molecular biology and medical field include:

Electroporation has been used to transport several drugs through the skin in humans, including insulin, heparin, and the local anesthetic lidocaine. Studies also suggest that electroporation could be used to deliver compounds that would ameliorate skin aging, such as particular genes or Vitamin C.

Transdermal drug delivery via electroporation can be enhanced through the use of mild heat, alkaline solutions, and sodium dodecyl sulfate. Because the drug reservoir remains outside the body, transdermal drug delivery devices provide the opportunity to easily adjust the quantity and delivery rate of medications. Transdermal systems could be controlled by a miniature computer, which would allow for accurate dosing as needed by the patient. These systems might also include sensors that monitor blood levels of compounds, such as glucose in diabetics, and then adjust the release of a drug, such as insulin. These and other developments in transdermal drug delivery technologies hold promise for improving patient compliance by making drug administration effortless and painless. 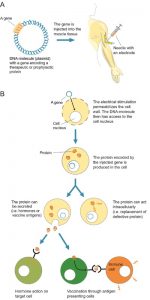 FIG. 7:  DIAGRAM OF THE METHOD OF GENE THERAPY USING ELECTROPORATION

There are nine ways for gene transfer:

The Pharmaceutical industry continues to invest significant resources to achieve the therapeutic profile, i.e. the right balance of safety and efficacy, necessary to enable viral vectors to play a role in facilitating DNA vaccine delivery. New therapeutic strategies are also being evaluated in which an alternative delivery method is used for prime applications of a vaccine and then a viral vector-based vaccine is used for the booster application of the vaccine. For example, Merck is conducting a clinical study to evaluate this prime-boost strategy with an electroporation-viral vector combination.

CONCLUSION: With the tremendous growth of biotechnology and the recent sequencing of the human genome, the demand for improved methods for the delivery of protein pharmaceuticals has resulted in the development of numerous technologies and companies focused on delivery methods. Electroporation is a simple, highly effective means of introducing cloned genes into a wide variety of cell types. It affords substantial benefits over alternative procedures, being easier to use, more efficient, and applicable to a larger number of different kinds of cells. As the parameters of electroporation become optimized, efficiency of DNA entry into the recipient cell may approach 100%.

In summary, even though electroporation has been known for approximately 35 years, it has only recently been applied to skin. In a relatively short time, the field has blossomed, fueled by a range of mechanistic studies and coupled with demonstrated transdermal delivery not only of small drugs but also of macromolecules including peptides, polysaccharides, oligonucleotides and genes. This review suggests that the delivery of protein- and gene-based drugs by electroporation could be an important vehicle for bringing more biotechnology products to the clinical market.