The non-proliferative activity of isolated saponins, gymnemagenol (C30H50O4) from Gymnema sylvestre and dasyscyphin C (C28H40O8) from Eclipta prostrata leaves were tested under on HepG2 cells under in vitro conditions. Both gymnemagenol and dasyscyphin C exhibited non-proliferative activity on HepG2 cells at 24 h with the IC50 value of 18.5 and 23.5μg/ml respectively. 5-Fluorouracil (5FU) a positive control showed the IC50 value of 1.34μg/ml.  The isolated saponins were not toxic to Vero cells.  From this study, it can be concluded that the saponins, gymnemagenol and dasyscyphin C have significant non-proliferative activity on HeLa cells under in vitro conditions.

INTRODUCTION: Medicinal plants have been considered as a valuable source for natural products and explored continuously for therapeutics for human well being. The use of plant products for pharmaceutical purposes has been gradually increasing. According to World Health Organization, medicinal plants would be the best source to obtain a variety of drugs for the treatment of many diseases 1. About 80% of individuals from developed countries use traditional medicine, derived from medicinal plants 2.  Saponins are a diverse group of compounds widely distributed in the plant kingdom. Chemically, saponins are glycosides consisting of both sugar and non-sugar aglycone, called sapogenin. Depending on the structure of aglycone, they are classified as steroidal and triterpenoid saponins.

Saponins exhibit a wide range of biological properties and are believed to be one of the key biologically active constituents of plant drugs used in folk, especially Far East medicine. Anticancer activity of many plant-derived saponins, ginsenosides 3, soyasaponins 4 and saikosaponin-d 5 has already been reported. G. sylvestre commonly called as ‘Gurmur’ is widely distributed throughout India. The plant is known for its antidiabetic activity 6 and is also rich in phytochemicals such as alkaloids, flavonoids, saponins, carbohydrates, and phenols with highest concentration of saponins being 5.5% 7. E. prostrata is a small plant; branched, annual herb belongs to a family Asteraceae and commonly called as ‘Karichalai’, with white flower heads. It is native to the tropical and subtropical regions of the world and widely distributed in India. The leaf paste is applied on the affected area of teeth to control the tooth ache and the leaves decoction was long been used orally for control of jaundice 8. The antimicrobial activity of saponins isolated from E. prostrata and G. sylvestre has been reported by us recently 9. The bioactivity of the isolated active principles of these plants is yet to be explored. Hence a study was planed to evaluate the effect of gymnemagenol and dasyscyphin C, the isolated active principles from these two common medicinal plants on HepG2 cells under in vitro conditions.

Extraction and Purification of Saponin: The powdered sample was defatted by petroleum ether for 3 hours at 40°C. After filtering the petroleum ether, the sample was extracted with methanol for 3 hours with mild heating. The methanol extract was concentrated and reextracted with methanol and acetone (1:5 v/v)[10]. The precipitate obtained was dried under vacuum, which turns to a whitish amorphous powder after complete drying. It was loaded on Merck silica gel-60 (230-400 mesh) column and eluted with chloroform-methanol-water (70:30:10) 11. The first fraction collected was air dried at room temperature (28°C) and the residue obtained was treated as pure saponins of G. sylvestre and E. prostrata. The purity of the saponin isolated was analyzed by thin layer chromatography using chloroform and methanol (7:3) as the solvent system.

Values are mean of three experiments 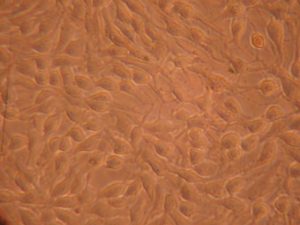 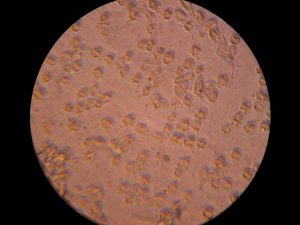 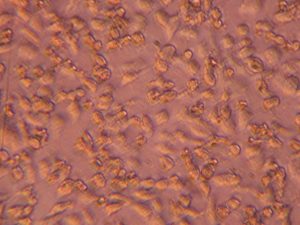 The non-proliferative activity was comparatively lesser with the isolated saponins when compared to the effect of 5FU. The isolated active principle gymnemagenol offered a high degree of inhibition over the growth of the HepG2 cells when compared to dasyscyphin C. The non-proliferative effect of gymnemagenol and dasyscyphin C was also tested on Vero cells. It was found that both the saponins were less toxic to Vero cells.

The antimicrobial activity of the isolated saponins from these plants has already been reported by us 9. The other study in our laboratory revealed the larvicidal activity on Leishmania major under in vitro conditions 14.  Plant saponins have been already reported to possess a wide range of biological activities 15, which include the anticancer cytotoxic activity. Several reports are available on the anticancer activity of saponins isolated from other plants 16, 17. Isolation of antisweet oleane type triterpene glycoside saponin, gymnemagenol was already been reported from G. sylvestre 18. Based on the results of this study, it can be concluded that the gymnemagenol of G. sylvestre and dasyscyphin C of E. prostrata has a significant non-proliferative activity on HepG2 cells. Further studies are under progress in our laboratory to establish the mechanism of anticancer activity of gymnemagenol and dasyscyphin C.

ACKNOWLEDGEMENT: Authors thank the managements of VIT University for providing necessary facilities to carry out this study.