INTRODUCTION: The deposition of Aβ in the brain is assumed to initiate a pathological cascade that results in synaptic dysfunction, synaptic loss, neuronal death, and cognitive dysfunction 1. Amyloid beta (Aβ) is thought to be a major pathological cause of Alzheimer’s disease. The Aβ (25–35) is a partial fragment of Aβ that similarly forms a β-sheet structure 2 and induces neuronal cell death 2-3, neurite atrophy 4-5, synaptic loss 4-6 and memory impairment 5, 6, 8. There are many reports showing that mice injected with Aβ (25–35) suffer from memory impairment and neurite and synaptic atrophy 5, 6, 8, 9.

It has been confirmed that peroxynitrite-mediated damage contributes to Aβ-induced neuronal toxicity and cognitive deficits 10, 11 and is widespread in the brain of AD patients 12. In AD patients, learning and memory are impaired by the concomitant loss of the cholinergic marker enzyme, choline acetyltransferase (ChAT), in the cerebralcortex13.

Flavonoids exert a multiplicity of neuroprotective actions within the brain, including a potential to protect neurons against injury induced by neurotoxins, an ability to suppress neuroinflammation, and the potential to promote memory, learning and cognitive function. Isorhamnetin is an abundant Flavonolaglycone in herbal medicinal plants, such as sea buckthorn (Hippophaerhamnoides L.) and Ginkgo biloba L., which are frequently used inthe prevention and treatment of cardiovascular diseases 14-15. A number of studies suggested that isorhamnetin can protect endothelial cells from injury caused by oxidized low-densitylipoprotein16, decrease blood pressure 17, and alleviate the damages of ischemia-reperfusion (I/R) to ventricular myocytes 18.

In the present study, to confirm the protective activity of isorhamnetin against Aβ-induced neurotoxicity, we investigated whether IRN prevents memory impairment in an Aβ25–35-injected animal model of AD. Biochemical analysis of neurotransmitter enzyme was carried out to check the improvement in cognitive function. In addition, expressions of iNOS and IL-β mRNA in the hippocampus of Aβ25–35-injected rats were analyzed using reverse transcriptase PCR.

Aβ25–35 was “aged” by incubation at 37°C for 4 days as described previously 6. Rats were anesthetized by intraperitoneal (i.p.) injections of ketamine and xylazine and placed in a stereotaxic holder (Instruments and Chemicals, Ambala, New Delhi). A midline sagittal incision was made in the scalp and hole was drilled in the skull over the intracerebroventricle using the following coordinates: 0.8 mm posterior to Bregma, 1.5 mm lateral to the midline and 3.8 mm beneath the dura. All injections were made using a 10-μl Hamilton syringe equipped with a 26-gauge needle. The dura was perforated with the needle of the microsyringe. Animals were infused with 5μl of sterile distilled water (vehicle-treated), aggregated Aβ25–35 (2μg/μl) into cerebral lateral ventricle at a rate of 1μl/min; the needle was left in place for an additional 5 min to permit sufficient diffusion and to avoid pressure induced damage. The scalp was then closed with a suture.

Recovery of anesthesia took approximately 4–5 h. The rats were kept in a well-ventilated room at 25 ± 3ºC in individual cages until they gained full consciousness. Food and water were kept inside the cages for the first week, allowing animals’ easy access, without physical trauma due to overhead injury. Animals were then treated normally; food, water, and the bedding of the cages were changed often.

Y-maze task is used to measure the spatial working through the spontaneous alternation of behaviour 19. The maze is made of black painted wood. Each arm is 40 cm long, 13 cm high, 3 cm wide at the bottom, 10 cm wide at the top, and converges at an equal angle. Each mouse is placed at the end of one arm and allowed to move freely through the maze during an 8-min session. Rats tend to explore the maze systematically, entering each arm in turn. The ability to alternate requires that the rat know which arm they have already visited. The series of arm entries, including possible returns into the same arm, are recorded visually. Alternation is defined as the number of successive entries into the three arms, on overlapping triplet sets. The percentage of alternation is calculated as the ratio of actual alternations, defined as the total number of arm entries minus two, and multiplied by100.

Estimation of protein: The total protein content was measured according to the method of Lowry et al. (1951) 20 using bovine serum albumin as standard.

The hydrogen peroxide (H2O2) generation was assayed by the method of Pick and Keisari 21. Horseradish peroxidase converts hydrogen peroxide in to water and oxygen. This causes oxidation of phenol redforms adduct with dextrose which hasmaximum absorbance at 610nm and can be recorded spectrophotometrically. Levels of H2O2 generation were expressed as nM of H2O2-generated/mg protein.

The choline acetyltransferase (ChAT) activity was determined spectrophotometrically according to Wolfgram(1972) 22. The reaction mixture contained sodium phosphate buffer (pH 7.0), acetyl coenzyme A, chloride choline, physostigmine, NaCl, EDTA, hydrochloric creatinine and DTT. The mixture was preincubated at 37 °C for 5 min then mixed with the hippocampus homogenates, incubated at 37 °C for20 min and finally stopped the reaction in boiling water. Sodium arsenate was added to each tube for precipitation. The supernatant was mixed with 3 nM 4-PDS and incubated at 25 °C for 15 min. Absorbances were read at 324 nm.

Monoamine oxidase (MAO) levels were measured by the method of Tabor et al.23 this method is based on measurement of benzaldehyde formed with benzyl-amine hydrochloride (0.1 M) used as substrate. The absorbance was read at 340 nm and expressed as nmolbenzaldehyde/min/mg protein.

Total RNA isolation and mRNA expression of iNos and IL-β by RT-PCR:

Total RNA was puriﬁed from freshly isolated brain tissue using 1 mL of the TRI reagent by the method of Chomczynski and Sacchi (1987) 24. The RNA purity and concentration were determined using using Nano drop (Thermo Scientific) at A260/A280 nm. The purity of RNA obtained was 1.8–2.0. One microliter of total RNA was reverse transcribed by RT-PCR kit (Thermo scientific) according to the manufacturer’s instructions and further ampliﬁed by PCR. The details of the primer used, and size of the PCR ampliﬁed products are listed in Table 1. The PCR products were resolved by electrophoresis through 1.5% agarose gel and stained with ethidium bromide. The densities of PCR products in the agarose gel were scanned with a Gel Doc image scanner (Bio-Rad, USA) and quantiﬁed by Quantity One Software (Bio-Rad, USA).

TABLE 1: THE DETAILS OF PRIMERS USED

The data was analyzed by using analysis of variance (ANOVA) followed by Tukey’s test. All the values are expressed as mean±S.D. In all tests, the criterion for statistical significance was P< 0.05. 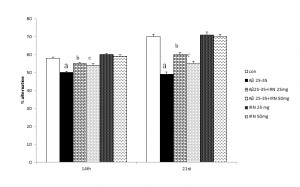 Effect of isorhamnetin on Aβ25–35 induced changes in level of H2O2 in hippocampus of control and experimental rats: 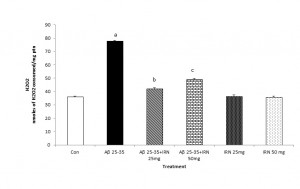 FIG. 2: EFFECT OF ISORHAMNETIN ON Aβ25–35 INDUCED CHANGES IN LEVEL OF H2O2 IN HIPPOCAMPUS OF CONTROL AND EXPERIMENTAL RATS.

Ameliorative effect of isorhamnetin on Aβ25–35 induced changes in activity of ChAT in hippocampus of control and experimental rats: 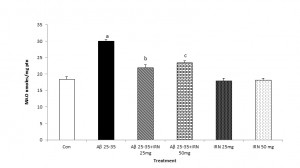 FIG. 3: EFFECT OF ISORHAMNETIN ON THE ACTIVITY OF CHAT IN HIPPOCAMPUS OF Aβ25–35 INDUCED RATS

Attenuating effect of isorhamnetin on Aβ25–35 induced changes in the activity of MAO in hippocampus of control and experimental rats: 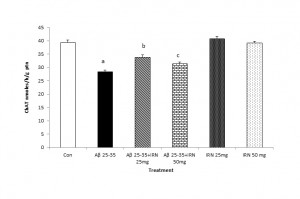 FIG. 4: EFFECT OF ISORHAMNETIN ON THE ALTERATIONS IN THE MAO LEVELS IN HIPPOCAMPUS OF CONTROL AND EXPERIMENTAL RATS.

Ameliorative effect of isorhamnetin on Aβ25–35 induced changes in mRNA expression of iNOS in hippocampusof control and experimental rats:  There was an abnormal (p<0.01) increase in iNOS mRNA expression in hippocampus of Aβ25–35 induced group as compared to control animals whereas isorhamnetin(25mg/kg b.wt.) treated group showed the significant decrease (p<0.05) in abnormal expression of iNOS (Fig.5).  The group treated with isorhamnetin (25mg/kg b.wt.) alone showed normal expressions of iNOS when compared with the control group.

FIG.5: THE EFFECT OF ISORHAMNETIN ON Aβ25–35 INDUCED mRNA EXPRESSION OF iNOS IN CONTROL AND EXPERIMENTAL RATS

Effect of isorhamnetin on Aβ25–35 induced changes in mRNA expression of IL-β in hippocampus of control and experimental rats:

FIG.6: THE EFFECT OF ISORHAMNETIN ON Aβ25–35 INDUCED mRNA EXPRESSION OF IL-β IN CONTROL AND EXPERIMENTAL RATS

DISCUSSION: Aβ (25–35) is potential neurotoxic peptide for primary neuronal cortical cells which produces neurofibrillary tangles25-26 and the toxicity induced by Aβ (25–35) in rodents resembles to AD which is suitable for the evaluation of Alzheimer’s type of dementia. Isorhamnetin, which is an O-methylated metabolite formed in the small intestine and liver, and increased in the human brain, has a higher BBB permeability than aglycone by its apparent lipophilicity 27. The O-methylated metabolites of derived flavonoids have the potential to improve human memory and neuro-cognitive performance via their ability to protect vulnerable neurons and long-term potentiation, which is considered as major mechanism of memory in the brain.

In AD patients, learning and memory are impaired by the concomitant loss of the cholinergic marker enzyme, choline acetyltransferase (ChAT), in the cerebral cortex 29. In this study, the Aβ (25–35) induced decrease in ChAT activity was reverted to normal by the IRN treatment and which may account for the improvement in the short term memory as assessed by y arm maze.

Aβ 25-35 has the potential to induced oxidative stress in the brain cholinergic hypo function, elevation of AChE and MAO 30-32.  It is well accepted that oxidative stress (associated with MAO) contributes to the disturbance of neurotransmitters, including NE and the cholinergic system, which have a critical role in the cognitive impairment in AD 33-35. Elevations in MAOA in Alzheimer neurons have been linked to increase in neurotoxic metabolites and neuronal loss. Compelling studies have shown that the involvement of MAO in AD and neurodegenerative diseases plays an important role in several key pathophysiological mechanisms 36-37.

Elevated monoamine levels in the brain resulting from MAO induce changes in other neurotransmitter systems and lead to cognitive impairment. The isorhamnetin has been reported to inhibit MAO- A by 55% at 1.26 µM 38. Aβ 25-35 induced animals exhibited the increase in MAO activity whereas IRN reduced the abnormal increase in activity of MAO .It might be the reason for improving the spatial memory in Y-arm maze.

In this study, we found that IRN significantly inhibited the increase of iNOS mRNA in the hippocampus induced by Aβ25–35. It has been demonstrated in vitro that the stimulation of neuronal cell lines with TNF-α leads to increased expression of inducible nitricoxide synthase and subsequent apoptosis 39. We analyzed the expression of TNF-α in hippocampus of control and experimental rats. There was marked elevation in TNF-α expression which was reduced by IRN treatment (data not given). Hence, decrease in TNF-α would be the reason for reduction in the iNOS expression. In contrast to the NO synthesized by nNOS, which facilitates learning and memory formation under physiological conditions 40-43, the NO synthesized by iNOS  is deleterious 44. The iNOS produced a large amount of NO, which may cause neurotoxicity in vitro, has been previously reported 45, 46. It has been reported that isorhamnetin treatment down regulated the expression of iNOS, a key enzyme for catalyzing NO production47-48. IRN alleviated the oxidative stress in hippocampus by reducing the peroxinitrite formation via inhibiting iNOS expression.

CONCLUSION: In summary, this study highlights the potential neuroprotective mechanisms of IRN involved in improvement of cognitive function. Together, the results of the present study suggest that administration of isorhamnetin prevents Aβ 25-35 induced cognitive impairment and associated oxidative stress. Hence, neuroprotective activity of IRN may be mediated through free radical scavenging activity and inhibition of proinflammatorycytokine and iNOS.

ACKNOWLEDGEMENTS: The financial support extended by UGC in the form of project fellow under UGC- BSR Research fellowship in science is gratefully acknowledged.

CONFLICT OF INTEREST: The authors declare that there is no conflict of interests.