In the present work , novel 2-Amino-N'-(2-oxoindolin-3-ylidene) benzo[d]oxazole-5-carbohydrazides were synthesized and  evaluated for In-vivo anti-inflammatory activity by carragenan induced rat paw edema method and were known to exhibit promising anti-inflammatory activity at a  dose of 30mg/kg bw. Compounds D2, D3, D5 and D8 were found to be comparatively potent with the standard Indomethacin.

INTRODUCTION: Relief of pain and inflammation is human being is a major challenge for medicinal chemistry researchers. Non-steroidal anti-inflammatory agents currently in use are characterized by their ability to relieve the pain of both pathological and non-pathological inflammation associated with inflammatory disorders and to inhibit the synthesis of endogenous prostaglandins (PGs) which are the mediating factors for the inflammation process. They competitively inhibit cyclooxygenases (COXs) and elicit their therapeutic effects by inhibition of prostaglandin (PG) synthesis. Specifically by the enzymes that catalyze the synthesis of cyclic endoperoxides from arachidonic acid to form prostaglandins. Two COX isoenzymes have been identified: COX-1 and COX-2.

COX-1, expressed constitutively, is synthesized continuously and is present in all tissues and cell types, most notably in platelets, endothelial cells, the GI tract, renal microvasculature, glomerulus, and collecting ducts. COX-2 is considered an inducible isoenzyme, although there is some constitutive expression in the kidney, brain, bone, female reproductive system, neoplasias, and GI tract. The COX-2 isoenzyme plays an important role in pain and inflammatory processes 1.

Among the heterocycles, Benzoxazoles occupy a unique place in the realm of natural and synthetic organic chemistry and it is considered as structural isosteres ofthe naturally occurring nucleic bases adenine and guanine, which allow them to interact easilywith polymers of living systems and possess most remarkable and a wide range of biological activities. The substituted benzoxazoles have been shown to exhibit antitumor, antihistaminic, antiparasitic, and herbicidal, anti allergic, antihelmintic, COX-2inhibitory, antifungal, antibacterial, anticancer, antitubercular, anticonvulsant, diarrhoea-predominant irritable bowel syndrome, hypoglycaemic, HIV-1 reverse transcriptase inhibitor & insecticidal activities 2-16. It has also been shown to have binding affinity to Aβ42 fibrils. On the other hand, Isatins are an important group of heterocyclic compounds which are biologically active and of significant importance in medicinal chemistry.

A variety of biological activities are associated such as analgesic, anticonvulsant, antidepressant, anti-inflammatory, antimicrobial activity and effects on the central nervous system identified in animals as a major component of the endogenous monoamine oxidase inhibitor 17-34. In this communication we described the synthesis of hybrid molecules consisting of Benzoxazoles along with Isatin moiety highlighted their in -vitro anti-inflammatory activity.

Isonitrosoacetanilides: In a 5 L R.B. Flask were placed 90g (0.54mol) of chloral hydrate and 1200 ml of water. To this solution, were then added crystallized sodium sulphate (1300 g) followed by a solution of appropriate aniline (0.5mol) in 300 ml of water, to which 51.2g (43ml, 0.52 mol) of concentrated Hydrochloric acid has been added to dissolve the aniline. Finally, a solution of hydroxylamine HCl, 110g (1.58mol) in 500 ml of water was added.  The contents of the flask were heated on water bath so that vigorous boiling began in about 40 to 45 minutes.  After 1 to 2 minutes of vigorous boiling the reaction was completed.  During the heating period, some crystals of isonitrosoacetanilide separated out.  On cooling the solution in running water, the remaining crystallized.  It was filtered under suction and air dried.

Indole-2, 3-diones – Sulphuric acid (600 g, 326 ml, sp.gr. 1.84) was warmed at 500C in a 1 litre R.B. flask fitted with an efficient mechanical stirrer, and to this, 0.46mol of dry finely powdered appropriate isonitrosoacetanilide was added at such a rate so as to maintain the temperature between 60°C to 70°C but not higher.  External cooling was applied at this stage so that the reaction could be carried out more rapidly.

After the addition of isonitrosoacetanilide was completed, the solution was heated to 80°C and maintained at that temperature for 10 minutes to complete the reaction.  Then the reaction mixture was cooled to room temperature and poured up on 10 to12 times the volume of crushed ice while stirring.  After standing for about half-an-hour, the product separated was filtered, washed several times with small portions of cold water, several times to remove sulphuric acid. It was then air dried.

Synthesis of Methyl 4-hydroxy-3-nitrobenzoate (2): To a solution of aluminium nitrate (40 g) in glacial acetic acid: acetic anhydride (1:1, v/v) mixture (160 ml) 40 g of Methyl-4-hydroxybenzoate (1) was added in small portions, while heating gently; cooling and shaking occasionally. The reaction mixture was left at room temperature for 1.5 h while shaking the contents intermittently to complete the nitration. The resulting brown solution was diluted with ice cold water (500 ml) to get a bulky yellow precipitate of methyl 4-hydroxy-3-nitrobenzoate.(mp= 73°C)

Synthesis of Methyl 3-amino-4-hydroxybenzoate (3):Methyl 4-hydroxy-3-nitrobenzoate (2, 40 g) was dissolved in boiling ethanol (400 ml) and sodium dithionite was added to this boiling alcohol solution until it becomes almost colourless. Then the solvent was reduced to one third of its volume by distillation and to the residual liquid, ice cold water was added. The resulting shiny product (3) was filtered, washed with cold water and dried. (mp= 143ºC)

Synthesis of Methyl 2-aminobenzo[d]oxazol-5-carboxylate (4): 1.3 moles of methyl 3-Amino-4-hydroxybenzoate (3) was dissolved in 1L Methyl alcohol and cooled the solution to 5ºC by adding chopped ice. A cold suspension of 1.5 moles of Cyanogen bromide in 1L of water was added over a period of 5min with rapid stirring. Continuing the stirring for 0.75h at room temperature, 1.3moles of solid Sodium bicarbonate in small portions over a period of 1.5 h was added to bring the pH 6.5 -7.0. Stirring was continued for another 1h. The solid was separated by filtration, washed with cold water and on recrystallization from ethyl alcohol has resulted white solid. (mp= 243°C)

Synthesis of 2-Aminobenzo[d]oxazol-5-carbohydrazide (5): A mixture of Methyl-2-aminobenzoxazole-5-carboxylate (4, 0.01mol) and hydrazine hydrate (99%) (0.01mol) were taken in 50ml of alcohol, heated under reflux on a water bath for 5hrs. The alcohol was reduced to half of its volume and cooled. The product separated was filtered and washed with small portions of cold alcohol first and then with cold water repeatedly and dried. The product purified by recrystallization from methanol has resulted white solid. 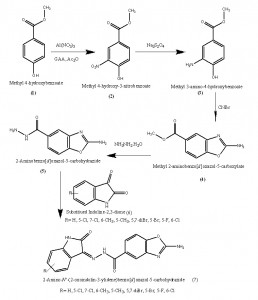 The 2-aminobenzo[d]oxazole-5-carbohydrazide (5, 0.01mol) and appropriate isatin (6, 0.01mol) in methanol (20ml), 2 drops of glacial acetic acid heated under reflux on a water bath for 8 to 12 h. The product thus obtained was filtered, washed with water and air dried.

All the experiments were carried out using male, Sprague-Dawley rats (300-350 g) were obtained from animal house, UCPSc, Kakatiya University, Warangal, India. On arrival the animals were placed at random and allocated to treatment groups in polypropylene cages with paddy husk as bedding. Animals were housed at a temperature of 24 ± 2oC and relative humidity of 30 – 70 %. A 12:12 light: day cycle was followed. All animals were allowed to free access to water and fed with standard commercial rat chew pellets. All the experimental procedures and protocols used in this study were reviewed by the Institutional Animal Ethics Committee, Kakatiya University, Warangal, India.

1% w/v suspension of carrageenan was prepared by adding 100mg of carrageenan powder to 10ml of saline (0.9% NaCl) solution and set aside to soak for 1 hour. A homogenous suspension was then obtained by thorough mixing with a magnetic stirrer.

Sprague-Dawley strain Albino rats of either sex, weighing between 250-300 g, fasted overnight before the test and allowed water ad libitum, were divided into ten groups of six animals each. The volume of the right hind paw was measured using a plethismograph. This constituted the initial reading. The test compounds were tested at a dose of 30mg/kg body weight. Indomethacin 5mg (0.014mmoles)/kg body weight was used as standard. All these were administered as suspensions using sodium CMC (0.1% w/v) as suspending agent.

Control group of animals received a suspension of sodium CMC only. All these were administered intraperitonially 1h before the injection of carrageenan. 0.1 ml of 1% w/v carrageenan suspension in normal saline was injected in to the plantar region of the right hind paw.

The swelling produced after injection of the carrageenan was measured at 2hour intervals for 8 hours. Percentage inhibition of edema was calculated using the formula given below:

All the compounds are evaluated for acute toxicity and well tolerated by the experimental animals and it has been found to be non-toxic and safe even up to a dose of 300mg/kg bodyweight orally. 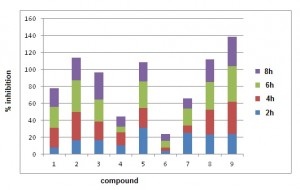