A novel, safe, accurate, sensitive and economic Spectrophotometric method was developed by application of mixed hydrotropy using  solution containing 45% urea and 5% sodium citrate as hydrotropic solubilizing agent for the quantitative determination of poorly water-soluble budesonide from bulk and tablet dosage form. The solubility of budesonide increases more than 20 times in mixed hydrotropic solution as compared to solubility in distilled water, thus, a mixed hydrotropic solution containing 45% urea and 5% sodium citrate was employed to carry out spectrophotometric analysis precluding use of organic solvents. Budesonide obeyed Lambert Beer’s law in the concentration range of 5 to 30μg/ml (r2= 0.999) in mixed hydrotropic agent with mean recovery was found 98.75±0.63%. The percent concentration in marketed tablet formulation was found 98.56±1.070%. Parameters such as linearity, precision, accuracy, specificity and robustness were studied as reported in the International Conference on Harmonization guidelines. The relative standard deviations for three replicate measurements in five concentrations of samples were always less than 2%. So this method can successfully employ in the routine analysis of budesonide in bulk drug and tablet dosage forms.

Sodium benzoate, niacinamide, sodium salicylate, sodium acetate, sodium citrate, and urea, have been employed to enhance the aqueous solubility of many poorly water soluble drugs. Various organic solvents like methanol, chloroform, alcohol, dimethyl formamide, and benzene have been employed for the solubilization of poorly water soluble drugs for spectrophotometric estimations 3-13.

Drawbacks of organic solvents include higher cost, toxicity, pollution, and error, in analysis due to volatility. The primary objective of this study was to employ hydrotropic solubilizing agents, sodium citrate and urea to preclude the use of organic solvents. The study also includes development of simple, reproducible and economical spectrophotometric method for the determination of budesonide in bulk drug and its tablet formulation. Budesonide is an anti-inflammatory, poorly water soluble drug. Chemically it is (11β, 16α) - 16, 17-[butytlidene bis (oxy)-11, 21-dihydroxypregna-1, 4-diene-3, 20- dione]. It is used orally for the treatment of Crohn’s disease. While it’s inhaled formulation are used for the treatment of asthma.

Extensive literature survey revealed HPLC 14, HPTLC and very few UV spectrophotometric methods for estimation of budesonide alone or in combination 15 with other drugs which require use of costlier and toxic organic solvents.

MATERIALS AND METHODS: Budesonide drug sample was supplied by Cipla Pharmaceuticals Limited, Goa as gift sample. A Shimadzu UV-visible recording spectrophotometer (model- UV-2501 PC) - with 1 cm matched quartz cells was used for spectrophotometric analysis. Commercial tablets of budesonide were procured from the market. All other chemicals used were of analytical grade.

Preparation of standard solution and calibration curve: Powder equivalent to 2.5 mg of budesonide was taken in a 25 ml volumetric flask. Five ml of mixed hydrotropic solution containing 45% urea and 5% sodium citrate was added. The flask was shaken properly for 10 min to solubilise the drug; and the volume was made up to the mark with distilled water to get a standard solution containing 100 μg/ml of budesonide.

This stock solution was divided into two parts A and B. Part A was kept at Room Temperature for 48 hrs to check its chemical stability and precipitation, if any. Part B was further diluted with distilled water to get various dilutions containing 5, 10, 15, 20, 25, and 30, μg/ml of drug. Absorbances were noted at 244.8 nm against corresponding reagent blanks.

Calibration curve was plotted as concentration verses absorbance. It obeys Beer's law within the concentration range of 5-30μg/ml. The absorptivity values (A- 1%, 1 cm) of drug at selected wavelengths was determined. Part A solution was analyzed in the same way as part B solution. 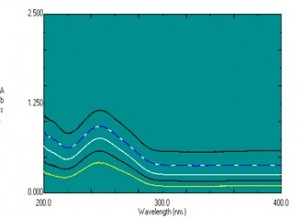 Preliminary solubility study of drug: Determination of solubilities of the drug in urea solution, sodium citrate solution, urea with sodium citrate solution and distilled water were carried out at 28±1oC. Sufficient excess amount of drug was added to screw capped 30 ml glass vials containing various hydrotropic solutions and   distilled water, separately. The vials were shaken mechanically for 12 hrs at 28±10C in orbital flask shaker. The solutions were allowed to equilibrate for next 24 hrs and then centrifuged for 5 minutes at 2000 rpm. The supernatant of each vial was filtered through Whatmann filter paper # 41. Filtrates were diluted with distilled water suitably and absorbances of solutions were noted against respective reagent blanks to determine the solubilities.

Analysis of budesonide Bulk drug by proposed method: Accurately weighed 2.5 mg of budesonide was taken in a 25 ml volumetric flask. Five ml of mixed hydrotropic solution containing 45% urea and 5% sodium citrate was added. The flask was shaken properly for 10 min to solubilize the drug; and the volume was made up to the mark with distilled water. .It was filtered through Whatmann filter paper # 41. Filtered extract was appropriately diluted with distilled water and absorbance was noted at 244.8 nm against reagent blank and drug content was calculated (Table 1).

Analysis of budesonide in tablet by proposed method: Twenty tablet of budesonide were weighed and finely powdered. Powder equivalent to 2.5 mg of budesonide was taken in a 25 ml volumetric flask. Five ml of mixed hydrotropic solution containing 45% urea and 5% sodium citrate was added. The flask was shaken properly for 10 min to solubilize the drug; and the volume was made up to the mark with distilled water. .It was filtered through Whatman filter paper # 41. Filtered extract was appropriately diluted with distilled water and absorbance was noted at 244.8 nm against reagent blank and drug content was calculated (Table 2).

Recovery studies: To evaluate the validity and reproducibility of the proposed method, recovery experiments were carried out. Recovery study was carried out as per ICH norms at three different concentration levels- 80%, 100%, 120% by replicate analysis (n=3).  Here to a preanalyzed sample solution, standard drug solutions were added as spiked concentrations and drug contents were determined by the proposed analytical method. The results of analysis of recovery studies are presented in Table 3.

Validation of developed method: The methods were validated statistically as per ICH/USP guidelines for parameter like accuracy, precision, specificity, LOD, LOQ, ruggedness, linearity and range.

Accuracy: Accuracy of the developed method was confirmed by doing recovery study as per ICH norms at three different concentration levels- 80%, 100%, 120% by replicate analysis (n=3). Here to a preanalyzed sample solution, standard drug solutions were added and then percentage of drug content was calculated. The result of accuracy study was reported in Table 4. From the recovery study it was clear that the method is very accurate for quantitative estimation of budesonide in tablet dosage form.

Linearity and Range: Appropriate dilutions of standard stock solutions were analysed as per the developed methods. The Beer- Lambert’s concentration range was found to be 5-30 µg/ml for budesonide. The linearity data are presented in Table 4.

LOD and LOQ: Limit of detection (LOD) and limit of quantification (LOQ) were calculated as 3.3 ∂/S and 10 ∂/S, respectively as per ICH guidelines, where ∂ is the standard deviation of the response and S is the slope of the calibration plot. The LOD is the smallest concentration of the analyte that gives a measurable response. The LOQ is the smallest concentration of the analyte which gives response that can be accurately quantified. The result of accuracy study was reported in Table 4.

Ruggedness: The ruggedness of the method was determined by carrying out the experiment on different instruments and by different operators. It was observed that there were no marked changes in the results, which demonstrated that the spectroscopic method developed, are rugged and robust.

This study reveals that the estimations can be done within 48 hrs at least, without having any detrimental effect on drug stability. As evident from Table 1, the mean percent budesonide estimated in bulk drug sample by proposed methods is 98.19. The results of analysis by the proposed method are very close to 100.0, indicating the accuracy of the proposed method. In the case of the proposed analytical method, the results are validated by low values of standard deviation (0.883), percent coefficient of variation (0.889) and standard error (0.510) (Table 1).  It is evident from Table 2 that the value of mean percent drug (BUDESONIDE) estimated by proposed spectrophotometric method for tablet formulation I and II are 98.33 and 98.56, respectively.

CONCLUSION: Most of the organic solvents like ethanol, methanol, acetonitrile, hexane, cyclohexane, diethyl ether, chloroform and toluene find wide use in spectrophotometric analysis of poorly water-soluble drugs. Most of these organic solvents are toxic in nature, costlier and responsible for pollution. Inaccuracy in spectrophotometric estimation due to volatility is another drawback of organic solvents. Since urea and sodium citrate are cheaper than most of the organic solvents, therefore other poorly water-soluble drugs can also be estimated by similar mixed hydrotropy avoiding the use of organic solvents. It is, thus, concluded that the proposed method is new, simple, cost-effective, safe, accurate, precise and environmentally friendly. This method can be successfully employed in the routine analysis of aceclofenac in tablet dosage form. Like this method other hydotropes can also be tried by combining them to exert synergistic effect on solubility of poorly water soluble drugs to be applied in different fields of analysis. Mixed hydrotropy may find wide use in development of aqueous formulations of poorly water soluble drugs in future.