INTRODUCTION: Rheumatoid arthritis is a disease that includes pain, swelling, inflammation etc. Various drugs like NSAIDs, biologics, DMARs etc are used for treatment of inflammation associated with arthritis 1. They can be easily given orally however; they have shortcomings like toxicity when given in high dose.

Hence, topical administration of such drugs is a better alternative as lesser dose with targeted action can be achieved. Also, as topical drugs do not go through first pass metabolism it is a better route for administration of drugs 2. Curcumin 1, 7-bis [4-hydroxy-3-methoxyphenyl]-1, 6-heptadiene-3, 5-dione Fig. 1, is a natural polyphenolic compound.

Curcumin which is the main active constituent is isolated from the rhizome of turmeric, Curcuma longa Linn (Zingiberaceae) and is orange-yellow crystalline powder 3 - 6. Curcumin is found to have many activities including anti-inflammatory activity which is mainly due to inhibition of cyclo-oxygenase, lipoxygenase, metabolism of arachi-donic acid, cytokines (Interleukins and tumour necrosis factor), nuclear factor-KB and also due to the release of steroidal hormones. It is also found to stabilize lysosomal membrane and cause uncoupling of oxidative phosphorylation along with strong oxygen radical scavenging activity 7-9. It has an empirical formula C21H20O6 and molecular weight of 368.38 g/mol. 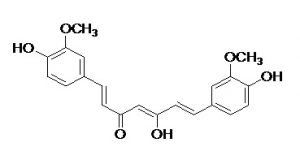 Dicofenac diethylamine (DDEA), diethyl-ammonium 2-[(2, 6-dichloroanilino) phenyl] ace-tate Fig. 2, is white to light beige, crystalline powder. It has empirical formula C18H22CL2N2O2 and molecular weight of 369.29 g/mol. It is sparingly soluble in water and acetone and freely soluble in ethanol and methanol. It is commonly used as an analgesic and anti-inflammatory agent and it works as a prostaglandin syntheses enzyme inhibitor thus inhibiting the activity of cyclo-oxygenase (COX) 10-13. DDEA is official in British Pharmacopoeia wherein it recommends HPTLC and HPLC method for its analysis 14. 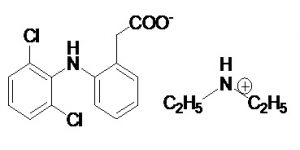 There are no marketed formulations available for this combination of both the drugs. As per the literature there are various analytical methods available for determination of curcumin 15 - 18 and DDEA 19-22. Therefore, for simultaneous deter-mination of these drugs, absorbance correction method was developed for analyzing the developed formulation. The objective of formulation was to develop gel containing DDEA and curcumin that would not only reduce dose and thus dose related toxicity but also provide targeted action as gel could be applied directly at the site of action without undergoing first pass metabolism. The method proposed was simple, accurate and validated as per ICH guidelines 23, 24, 25.

For quantitative determination of curcumin and diclofenac diethylamine from developed pharma-ceutical dosage form. In the present study, phosphate buffer 5.5: ethanol was used as a solvent for simultaneous determination of both the drugs. This method was simple, cheaper and easy to handle as compared to complex methods like HPTLC and HPLC and which also require solvents that are expensive.

MATERIALS AND METHODS: Curcumin was obtained from konarch herbals and healthcare, mumbai and diclofenac diethylamine from Unique Chemicals, Panoli. UV-Visible Spectrophotometer (UV Probe Version 2.33) of 1800 Shimadzu, Digital pH meter of Eutech Instruments and analytical weighing balance of citizon were used in the study. All the chemicals used were of analytical grade.

Preparation of Standard Stock Solution: An accurately weighed quantity of curcumin (10 mg) and diclofenac diethylamine (10 mg) were transferred separately to 10 ml volumetric flask and volume was made up with phosphate buffer 5.5: ethanol to obtain standard solution having concentration of curcumin (1000 µg/ml) and diclofenac diethylamine (1000 µg/ml). The solutions were then further diluted to get concentrations of 100 µg/ml of each drug.

Absorbance Correction Method: For deter-mination of λmax, working standard solutions were scanned from 200 to 500 nm. For DDEA λmax was found to be 278 nm and for curcumin 428.4 nm respectively. It was found that curcumin showed interference at 278 nm whereas DDEA did not show any interference at 428.4 nm Fig. 3. 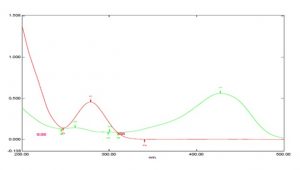 Quantitative estimation of curcumin & DDEA in the mixture was carried out using the following equations:

Preparation and Analysis of Gel Containing Curcumin Microspheres and Diclofenac Diethylamine: For preparation of gel, curcumin microspheres (1%) and diclofenac diethylamine (1%) were added to Carbopol 971 which was used as gelling agent. Other excipients used were propylene glycol, preservatives, triethanolamine and purified water (q.s) 26 - 29.  For analysis, 0.5 g of gel formulation containing curcumin microspheres and diclofenac diethylamine was weighed and transmitted to a 50 ml volumetric flask. The sample was dissolved in phosphate buffer 5.5: ethanol (1:1) by sonication for 30 min. It was then filtered and used for determination of curcumin and diclofenac diethylamine. A solution of placebo gel treated by the same procedure was used as blank to avoid interference of other components present in gel by spectrophotometric method.

Method Validation: The method of analysis was validated as per the ICH Q2B guidelines for validation parameters like linearity, accuracy, precision, robustness, LOD and LOQ. The accuracy studies were carried out using standard addition method, where in, percent recovery of curcumin and DDEA was determined. In this, curcumin and DDEA corresponding to 80%, 100% and 120% of label claim were added to drug samples. Then at each level of the concentration, six determinations were obtained and compared.

Precision study was carried out by determination of parameters like repeatability, intra-day precision, and inter-day precision. Accordingly, test solutions were analyzed in three replicates, on the same day andon three different days. For repeatability, same concentration was made six times and checked for repetition of data. The limit of detection (LOD) was calculated using equation LOD = 3.3σ/s whereas, Limit of quantification (LOQ) was calculated using equation LOQ = 10σ/s where σ is standard deviation of y intercept of the calibration curve (n=3) and s is the slope of regression equation. Robustness of the developed method containing curcumin and diclofenac diethylamine was evaluated at different pH values. Accordingly, pH 5.5, pH 5.4 and pH 5.6 were selected for analysis of robustness of developed method.

This developed method was then applied for analysis of curcumin and DDEA in combined dosage form and was found to be very accurate at separating other excipients from drugs.

TABLE 1: REGRESSION ANALYSIS DATA WITH SUMMARY OF THE VALIDATION PARAMETERS

From the results obtained it was found that the method was developed for simultaneous determination of curcumin and DDEA and also validated according to the guidelines given by ICH. Further, this method was found to be accurate and precise. The validity of the proposed method was evaluated by the simultaneous determination of drug content of curcumin and diclofenac diethylamine present in a gel formulation. Recovery obtained was 99.50% (0.034% RSD) for curcumin and 98.76% (0.035% RSD) for diclofenac diethylamine respectively as shown in Table 2. Results obtained from this assay method proved that there was no interference of excipients and that this method could be used effectively for the analysis of curcumin and DDEA. Recovery studies were performed to check the accuracy and validity of the proposed method.

TABLE 2: SUMMARY OF ESTIMATION OF CURCUMIN AND DDEA IN FINAL GEL FORMULATION

The results obtained demonstrate that the proposed UV-spectrophotometric method (Absorbance correction method) for simultaneous determination of curcumin and DDEA is simple, reliable and economical. Therefore, this method can be used for the determination of both drugs either in bulk or in the dosage formulations without interference with commonly used excipients and related substances.

CONCLUSION: The developed absorbance correction method is foundto be simple, sensitive, accurate and precise and canbe appliedfor routine analysis of Curcumin and Diclofenac diethylamine. The developed method was validated as per ICH guidelines. From statistical analysis it was proved that the method is repeatable and selective for the analysis of Curcumin and Diclofenac diethylamine in combination as a single drug in bulk as well as in pharmaceutical formulations.

CONFLICTS OF INTEREST: The Authors of the article declare there is no conflict of interest