NUTRITIONAL AND PHARMACOLOGICAL IMPORTANCES OF GENUS COSTUS: A REVIEW

NUTRITIONAL AND PHARMACOLOGICAL IMPORTANCES OF GENUS COSTUS: A REVIEW

ABSTRACT: The Genus Costus (Linn.) is an important medicinal plant belonging to the family Costaceae. The Genus as a whole is often called Spiral Ginger. The genus is represented by about 175 species distributed throughout the world. The aerial parts of the plant and the rhizomes are edible, the rhizome being good source of carbohydrate, starch, amylase, protein and lipid. Moreover the rhizome is an alternative source of diosgenin and generally used to control diabetes. Rhizome of Costus is also used for curing many other ailments. In Ayurveda, the rhizomes are ascribed to be astringent, acrid, cooling, aphrodisiac, purgative, anthelmintic, depurative and expectorant. The present study focuses on the nutritional and pharmacological importances of Costus species

INTRODUCTION: In India, the sacred Vedas provide many references on the utilities and importances of medicinal plants 1. Plant materials are of wide use in traditional systems of medicine, particularly in rural and tribal communities of the developing world. Medicinal plants are the native heritage of many distinctive geographical area and they bear significant global importances 2. Wild edible tuber species are important sources of food in India and they play significant role in the dietary habits of small and marginal families and forest- dwelling communities, most often during periods of food scarcity 3. Wild edible tubers refer to species that are neither cultivated nor domesticated, but available from their natural habitat and used as sources of food 4.

Tubers rhizomes and wild edible plants are collected and consumed from time to time by rural and tribal people over a period of 4-5 months a year from May- June to September- October to meet their food needs during periods of food shortage 5. Edible tubers/ rhizomes not only enrich the diet of the people but also possess medicinal properties. The use of plant based drugs and chemicals for curing various ailments and diseases are as old as human civilization 6. They are the only resources available for the treatment of different microbial infections among many rural and tribal communities even today 7.

In Odisha, several tribal communities like Kharia, Kolho, Santhal, Mankirdia, etc. depend on wild food plants and use their fruits, flowers, leaves, bulbils, tubers etc. as food either for their daily requirement or to fulfill the need during the periods of food shortage and famine 8. Many of the forests are rich in wild tubers that are used both for food and medicinal purposes 9. Many tropical tuber species are used in the preparation of stimulants, tonics, carminatives and expectorants 10. The tuber crops like Ipomoea spp., Colocasia spp. Manihot spp., Dioscorea spp., Amorphophallus spp. and other rhizomatous crops like Curcuma spp., Costus spp., Zingiber spp.etc.  are profoundly used by the tribal communities of the state as food and medicines 5. The genus Costus belonging to the family Costaceae, has species like Costus igneus, Costus afer, Costus pictus, Costus arabicus, Costus dubius, Costus speciosus, etc. Among these species, Costus speciosus is profusely distributed in the forests of Odisha.  It is locally known as Kakaiya, Keu, Keukand, etc. C. speciosus is used as therapeutic both in traditional and folk medicines 11. It is not only used as therapeutic medicines but for other socio- cultural purposes, such as wrapping of indigenous food items, mat making, treatment of evil repellants 12. The rhizome of the C. speciosus is used as an antifertility agent as it is rich in diosgenin, a suitable component for the synthesis of corticosteroids and oral contraceptives 13. The rural and tribal people use the leaves against ear infections, diarrhoea, cold, catarrhal fever, cough, dyspepsia and rhizomes for skin diseases and snake bites 14. It possesses antibacterial activity due to the presence of bioactive compounds like alkaloids, terpenoids, tannins, glycosides, saponins, etc. 15.

Botanically, the genus have long fleshy stems with tuberous rootstock. The leaves are spirally arranged with silky pubescent beneath. Flowers are densely arranged which are terminal or spikes. The calyx is like short tube, funnel-shaped with ovate teeth. corolla tube is short, the segments are large and sub equal. Stamens with broad filament, forming oblong petaloid process with the connective. The ovary is generally 3- celled, style is filiform and stigma with a semilunar ciliated depression. Ovules are many and superposed. Capsule globose or ovoid. Seeds are subglobose or obovoid with short aril 16. Flowering time of the plant is from August to October 17. With respect to the Genus, C. speciosus plant is straight with long leafy stem that grows about 0.6 to 1.8 height.

The root stock is tuberous. The leaves are sessile, oblong, spirally arranged with silky pubescent beneath. Calyx is short tube, funnel- shaped with ovate teeth. The bracts are ovate, mucronate, bright red, corolla tube is short. The flowers are white in colour and present in very dense spikes. Fruit is capsule, globosely trigonus and red in colour. The seeds are black with white aril. The ovary is generally 3- celled, style is filiform and stigma generally with a semilunar ciliated depression. Ovules are many and superposed. Capsule generally globose or ovoid, finally dehiscing on one side between the ribs. Seeds are subglobose or obovoid with short aril 18. 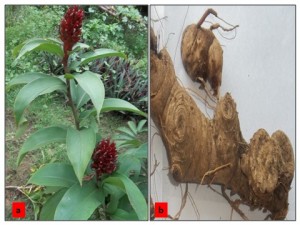 The genus Costus comprises of 175 species distributed in the humid tropics of both hemispheres. Different species are found in Indo-China, Malaysia to New Guinea, Taiwan and more or less throughout India 18. The plant is generally found in roadside ditches and low lying areas in the forests. It occurs throughout the foot hills of Himalayas from Himachal Pradesh to Assam, Vindhya Satpura hills in Central India, Eastern Ghats of Andhra Pradesh and Western Ghats of Maharashtra, Karnataka, Tamil Nadu and Kerala up to an altitude of 1220 ft 19. Costus speciosus is the only species of family Costaceae found in Odisha. C. speciosus is distributed in different parts of the state like Papadahandi, Gandhamardan, Jagatsinghpur, Cuttack, Rayagarh, Khurda etc. 18.

Rhizome of Costus spp. is rich in macronutrients like carbohydrate, starch, amylose, protein, lipid etc. and is also good source of micronutrients like Vitamin A 19. Besides it is rich in antioxidant components like β- carotene, ascorbic acid (Vitamin C), tocoferol (Vitamin E), that can prevent coronary disorder and cancer (Nedunchezhiyan et al., 2012). Singh (2011) 20 reported that the rhizome of C. speciosus is consumed raw or as cooked vegetable and it is highly nutritious with high content of carbohydrate, starch, amylase, protein and lipid/oil. The stem of C. afer is reported to contain good amount of moisture, crude fat, crude protein, carbohydrate, crude fibre and ash which indicates its nutritional values 21. Vishalakshi and Urooj (2010) 22 reported that the leaves of C. speciosus and C. igneus are rich with protein, iron, ascorbic acid, β- carotene, α- tocopherol, glutathione and flavonoids. Karthikeyan et al., (2012) 23 highlighted the protein and phenolic content of C. speciosus qualitatively and quantitatively and found high amount of phenolic content in the mature leaves of the plant.

Anti nutritional components are natural or synthetic compounds that interfere with the absorption of nutrients. Protease inhibitors, lipase, amylase, phytic acid, oxalic acid etc. are some of the anti- nutritional components. Ukana et al., (2012) 21 reported the anti-nutritional compounds such as saponins, total oxalate, cyanide, and tannins in the stem of C. afer. The anti- nutritional compounds like saponins, oxalate, tannin, etc. with low toxicity level are beneficial to plants (Singh et al., 2010) 22. The saponins collected from C. speciosus observed to impair the digestion of protein and the uptake of vitamins and minerals in the gut of animals (Francis et al., 2002) 23.

Bioactive compounds are the compounds or the secondary metabolites capable of eliciting pharmacological or toxicological effects. The rhizome of genus Costus is rich in diosgenin (Gupta et al., 2008a.) 28. The rhizome is also rich in prosapogenin B of dioscin, diosgenone, cycloartenol, 25 cycloartenol, octacosanoic acid, spirostanol glycoside, (steroidal saponin) and furostanol glycoside 26-O-β- glucosidase 29, 30. The rhizome of Costus spp. contain 5α- stigmasten-3b-ol, sitosterol-β-D-glucoside, dioscin, prosapogenins A and B of dioscin, gracillin and quinines 31. Duraipandiyan et al. (2012) 32 isolated two sesquiterpene lactones- costunolide and eremanthin from hexane extract of C. speciosus which inhibited the tested pathogens at lowest concentrations. 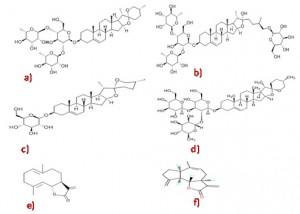 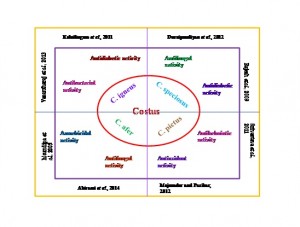 Saraf (2010) 11 reported the in vitro antibacterial activity of the rhizome of C. speciosus. The plants have shown efficient results against the bacterial strains like Escherchia coli, Staphyllococcus aureus, Klebsiella pneumoniae and Pseudomonas aeruginosa. The mature leaves of C. igneus have proven to be effective against bacterial pathogens like Bacillus subtilis, Proteus mirabilis, E. coli, P. aeruginosa. The methanol extract showed maximum zone of inhibition against E. coli whereas least zone of inhibition against P. mirabilis (Vasantharaj et al., 2013) 15. Rhizome extract of C. speciosus was found to be effective against Staphylococcus epidermidis and Salmonella typhimurium, and hence used as a potential bacteriocidal agent (Ariharan et al., 2012) 14. The antibacterial activity of the different parts (leaf, flower, stem and root) of C. pictus exhibited pronounced inhibitory activity against Shigella flexneri, K. pneumoniae, B. subtilis and E. coli. (Majumdar and Parihar, 2012) 33.

The methanol extract of C. speciosus leaves was inhibitory against fungal strains like Penicillium spp. and Mucor spp. Thus, the plant possesses effective antifungal activity 15. The extracts of different parts of two species of C. speciosus and C. pictus were found to be effective against fungus Pythium aphanidermatum whereas the extracts were not effective against the fungi Colletotrichum capsici and Sclerotium rolfsii 34. The leaves of C. afer exhibited efficient amoebicidal activity. The extract was tested for antiamoebic activity in vitro using polyxenic culture of Entamoeba histolytica (Moundipa et al., 2005) 35.

Helminthes are known as parasitic or intestinal worms those reside in human intestine and feed on living host. Medicinal plants can be natural and effective therapeutics against helminthes (Kanthal et al 2012) 36. Srivastava et al., 2011 reported that the aerial parts of C. speciosus can be used as promising anthelmintic agent. The extracts of the aerial parts was evaluated using Pheritima posthuma as experimental worms, which showed significant effect on paralyzing the worms.

The rhizome extracts of Costus spp. is also used against inflammation and anaphylactic shocks. The ethanolic extract of the rhizome of C. speciosus possesses anti- inflammatory and anti- pyretic properties. Significant anti- inflammatory effect was found against carrageenen- induced edema formation in rats at a dose of 800mg/kg and against cotton pellet granuloma formation in rats at doses of 400mg/kg and 800mg/kg (Binny et al., 2010) 39.

Diabetes mellitus is a chronic metabolic disorder affecting approximately 4% population worldwide and is expected to increase to 5.4% in 2025 (Ignacimuthu 2008) 41. The disease is characterized by high blood glucose levels due to absolute or relative deficiency of circulating insulin levels (Vishalakshi and Urooj 2008). Eliza et al. (2009) 42 extracted costunolide from crude extract of Costus speciosus and administered to streptozotocin (STZ) -induced diabetic male wistar rats at different doses and found plasma glucose to be significantly reduced in a dose-dependent manner when compared to the control.

CONCLUSION AND FUTURE PROSPECTS: From the detailed study of the available literature on Costus spp. it is clearly shown that the rhizome is rich in carbohydrate, starch, amylase, protein and lipid. Thus, can be a great source of food alternative. They are important sources of many medicinally efficient chemicals- like diosgenin, steroidal saponins such as prosapogenin, α & β dioscin, furostanol saponins like costunolide, octasanoic acid, cycloartenol and various other constituents. Many different pharmacological activities are attributed to these compounds such as antidiabetic, hepatoprotective, antifertility, antioxidant, antibacterial and antifungal activity. Many other pharmacological importances are still unknown. Further research can establish these plants as suitable sources of nutrient and herbal medicine as well.