OINTMENT OF METHANOLIC EXTRACT OF FICUS RELIGIOSA: A TRADITIONAL APPROACH IN WOUND HEALING IN RATS

OINTMENT OF METHANOLIC EXTRACT OF FICUS RELIGIOSA: A TRADITIONAL APPROACH IN WOUND HEALING IN RATS

ABSTRACT: The methanolic extract (ME) of leaves of Ficus religiosa (Family: Moraceae) was evaluated for their wound healing activity in rats. It was carried out in rats by employing excision wound models following topical application. The qualitative preliminary phytochemical analysis of ME indicated the presence of tannins, triterpenoids, alkaloids and steroids. All healthy animals of either sex were grouped into four groups and each group contains six rats. The rats of ointment (5 and 10 %w/w) of ME treated were compared to povidone-iodine ointment treated as a standard. The results of present work revealed that the 10%w/w ointment of ME of Ficus religiosa treated wounds showed significant reduction of wound contraction area as compared to control and indicated rapid epithelialisation.

INTRODUCTION: Peepal, one of the longest living fast growing deciduous trees has heart shaped leaves shaded in March and April month. Its fruit hidden with the figs and look like the berries that contain the flowers grow in pairs just below the leaves, ripped in the month of May. The juice of leaves employed in an ear troubles, sexual disorders, scabies diarrhea, toothache, cough, migraine, asthma, haematuria and gastric problems; barks in glandular swelling of the neck and inflammations, root bark in clean ulcers, gout, stomatitis and augmented granulations even upon it chew to prevent gum diseases. The ripe fruits employed in heart diseases, thirst and foul taste; and its powered form used to treat asthma. Its seed used in the treatment of urinary troubles 1.

Ficus religiosa plant and leaves were collected in the month of May from local area of Mandsaur and authenticated (Voucher specimen-T/006/2008) by professor of botany Dr. C. L. Ningwale, Govt. P.G. College, Mandsaur, M.P., India,

The fresh shade leaves of plant were collected, dried, ground with the help of grinder and convert into a powder after passing through sieve 80. The fine powder was subjected for extraction in to a soxhlet apparatus by using methanol at room temperature. The mixture was filtered with the help of whatman filter paper and kept the filtrate for drying at 40°C in an oven then calculate the percent yield of extract. The methanolic extract was stored in air tight containers for further study 9-10.

The presence of alkaloids, tannins, steroids, triterpenoids, glycosides and flavanoids active phytochemical constituents was accessed in methanolic extract (ME) of Ficus religiosa 9-17.

Ointments of ME of Ficus religiosa (5 and 10 % w/w) were developed after incorporation of methanolic extract in to the ointment base IP 18.

The in-vivo wound healing activity was carried out in wistar rats of either sex weighing between 120-200g by using excision wound model. The protocol of the present work was approved by Institutional Animal Ethical Committee (IAEC), Kota College of Pharmacy, Kota, Rajasthan, India (Ref.No.KCP/1291/09/ac/CPCSEA). The procure animals were grouped and housed in poly acrylic cages (38x23x10 cm) with not more than four animals per cage and maintained  under standard laboratory conditions with natural dark and light cycle (14 hrs light/10 hrs dark) at 27±2°C and relative humidity (RH) 44-56%. They were allowed free access to standard diet (Golden Feeds, India) and tap water ad libitum for one week before and during the experiments. The animals were acclimatized one week before start the activity in laboratory.

In-vivo Excision Wound Model: In-vivo wound healing activity was carried out by using excision wound model to investigate percent wound contraction (PWC) and epithelization 21-24. The animals were anaesthetized with ketamine hydrochloride (1ml, 10mg/kg I.V.), depilated on back and inflicted with an excision of 500 mm2 as explained in Morton and Malone 25. Blotting the wound by swabbing with cotton and achieved the homeostasis.

The randomly selected animals were grouped into four groups each group have six albino rats Wistar strain of 6-8 weeks of age of either sex, each weighing 120-200g. The following treatments were received by the rats and once in a day covered the entire area of wound till complete healing occurred as mention below:

Group I - Served as control group and received no treatment.

Group III- Served as treated group and received application of ointment (5%w/w) of ME of Ficus religiosa (test formulation).

Group IV- Served as treated group and received application of ointment (10%w/w) of ME of Ficus religiosa (test formulation). The respective treatments were received by the animals from starting zero ‘0’ day till the completion of wound healing take place.  PWC was determined at different time interval 6, 12 and 18 days. Trace areas of wounds were measured planimetrycally with the help of graph paper (mm scale). Without any residual raw wound, number of days needed for falling of the scab provided the period of epithelization. PWC was calculated with the help of following equation-

The results of pharmacological studies were expressed as Mean ± S.D. The total variations present in data were evaluated by using Graph Pad Prism 5 project software ANOVA (analysis of variance) followed by Student’s t-Test. The result were considered statistically significant when p value less than 0.05 (P<0.05) vs control.

After extraction of leaves of Ficus religiosa, investigated the qualitative preliminary phytochemical analysis of ME indicated the presence of tannins, triterpenoids, alkaloids, steroids, etc and absent of flavonoids and steroids, result showed in Table 1.

In the present in-vivo study, after the topical application of ointment of ME of Ficus religiosa the excision wound model was employed for the investigation of wound contraction and epithelization period. When compare the test ointment formulation with iodine-povidone ointment as a standard and normal healing as a control, a significant reduction in the wound contraction area was found from 6,12 and 18 post wound days. This study was performed until the fall of scar leaving on raw material behind, result of wound healing activity showed in Table 2 and Fig. 1-2. So from excision wound study, it was investigated that initially from day ‘0’ onward no

TABLE 2: EFFECT OF OINTMENT OF ME ON EXCISION WOUND MODEL IN RATS. 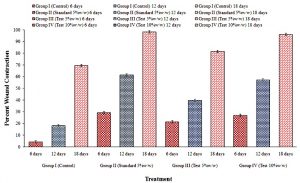 FIG. 1: EFFECT OF STANDARD AND OINTMENT (5AND 10%W/W) OF METHANOLIC EXTRACT ON EXCISION WOUND MODEL IN RATS. 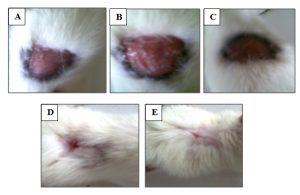 CONCLUSION: In conclusion, the phytochemical analysis clearly stated that leaves contained various active phytoconstituents like glycoside, alkaloid, tannin and steroids and absence of flavanoids and steroids. Wound healing comprise a highly dynamic concatenated order of cellular physiological & biochemical phenomenon that do not required special care or help but wounds are prone to infection and cause discomfort. So wound healing agent is needed to heal up the wound.  Wound healing become delay or incomplete in case of ischemia, diabetes and burn due to tissue necrosis etc or in severe conditions. Therefore in such special situation wound healing agent is needed that promote the healing.

The concurrent and independent various biological process granulation, collagenation, collagen maturation and scar maturation play important role in wound healing process. Finally concluded that test treated group significantly enhances the wound contraction rate with respect to standard, control group and epithelization. The collagens not only related to strength but also related to tissue integrity and maintain the homeostasis and later on epithelization of healing of wound. So in rats proliferation of collagen by employing of ME may contribute significantly to healing of wound may be due to tannins, other phytoconstituents and also impart necessary strength to repair the tissue 26, 27. So in the present research, excision wound model was employed to access the traditionally effect of ointment of ME of leaves of Ficus religiosa on wound healing 21-24.