ABSTRACT: Present era meant for utilization of natural resources in the development of dosage forms. In the present investigation natural biodegradable polymer olibanum resin is employed to develop matrix tablets of ambroxol hydrochloride for sustained release. Various Ratios of resins is study its ability to retard the early release of the drug from formulation. The tablets were prepared by wet granulation technique and were subjected for their thickness, weight variation test, drug content, hardness and friability. The in vitro dissolution studies were carried out using USP apparatus type II (paddle) at 100 rpm. Drug content of the formulations ranged between 97.78±0.08 to 100.12, where as hardness varies from 5.9-7.6kg/cm2. From the in vitro release studies it was found that F5 formulation was similar to marketed sample hence it was selected as a optimized formulation. Higuchi release  kinetics shows r2=0.9298, from Korsemeyer- Peppas plot n value >0.89 indicates super case II type of release indicating that the drug release from these formulations is by erosion of polymer. The optimized formulation of Ambroxol hydrochloride matrix tablets (10%w/w) were subjected to short term stability studies at 45°C with 75% RH for 45 days revealed that no significant differences in physical appearance, drug content, dissolution, T50 and T90 were found

Drug embedded in an insoluble matrix provides a convenient means of controlling the drug release. In this type of system, drug release is followed by penetration of dissolution medium in to the porous matrix to dissolve the drug, followed by diffusion/ leaching of the dissolved molecules out of the matrix. Previous studies shows that Olibanum [Frankincense] is an aromatic resin obtained from trees of the genus Boswellia, particularly Boswellia sacra Syn. B.carteri, B.thurifera [Burseraceae] used in aromatherapy. Silver and Hojari are generally considered the highest grades of frankincense.

Ambroxol hydrochloride has secretolytic effects. It stimulates serous cells of bronchi mucous membranes, increases mucous secretion content by changing the structure of bronchial secretion. It improves breathing and suppresses cough to some extent. A short biological half-life of 4hrs 11 calls for a frequent daily dose of 30mg 3-4 times a day 12. The aim of the present study was to design sustained release dosage form of Ambroxol to prolong clinical efficacy, minimize side effects and to reduce dosing 13.

Few works has been done on natural polymer like gum olibanum and resin 14, 15, 16 there is no evidence that polymers like olibanum resin was used for formulating sustained release matrix tablets of Ambroxol hydrochloride. Hence trials were made to study the utility of olibanum resin in retarding the drug release for 12 hrs.

In this investigation, UV Spectrophotometric estimation based on the measurement of extinction at 248 nm in pH 1.2 and   pH 6.8 phosphate buffers were used for the estimation of Ambroxol hydrochloride. 17

Powdered olibanum [10gm] was extracted repeatedly with 200ml quantity of solvent ether. The ether extracts were collected in a porcelain dish and concentrated to dry at 40°C to obtain resin fraction. The dried mass was powdered and size was reduced to 200 # mesh.

Different tablet formulations were prepared by wet granulation technique Table 1.  Accurately weighed quantities of pre-sieved drug and matrix material were mixed uniformly and wetted with isopropyl alcohol: water [1:1] as granulating fluid, the cohesive mass thus obtained was screened through a sieve no 16. The granules were dried at 50°C in hot air oven till constant weight was reached. The coarse granules so obtained were once again screened using the same sieve. Talc and magnesium stearate were finally added as glidant and lubricant and were compressed to tablets. Prior to compression, the granules were evaluated for various IPQC tests.

For all the formulations the prepared granules were evaluated for flow properties like angle of repose, loose bulk density, tapped bulk density, compressibility index and Hauser ratio.

Tapped bulk density= Weight of powder/tapped volume of the packing.

Drug content was determined by extracting powdered granules [75mg] of Ambroxol hydrochloride with water and for the filtered [0.45-μ membrane] solution absorbance was measured at 248nm. Loss on drying and Moisture content were determined by placing 1gm of granules in an oven which was maintained at 105°C and dried up to constant weight and were calculated from  the formula.

Physicochemical Compatibility of Drug and Polymer:

The infrared (IR) spectra were recorded using an FTIR spectrophotometer (Bruker FTIR) by the ATR method in the wavelength region between 4000 and 400cm–1 for pure drug Ambroxol hydrochloride and polymer olibanum resin. The spectra obtained for drug, polymer and formulation were compared.

The prepared matrix tablets were evaluated for hardness, weight variation, thickness, friability and drug content. Tablet hardness was determined for 5 tablets using a Monsanto tablet hardness tester. Friability was determined by taking 10 tablets in Roche friabilator. The weight variation was evaluated on 20 tablets using an electronic balance, and the test was performed according to the official method. For determining the drug content, three tablets from each formulation were crushed and powder containing 75mg of Ambroxol hydrochloride was dissolved in 75ml of phosphate buffer pH 6.8. From this 10µg/ml, equivalent solutions were prepared and drug content of Ambroxol hydrochloride was determined by measuring the absorbance of samples at 248nm using UV/Visible spectrophotometer. The swelling behavior of the optimized formulation [F5] was studied. The % increase in weight due to absorbed liquid or water uptake was estimated at each time point. The physicochemical properties of designed tablets are shown in Table 3.

The in vitro dissolution studies were carried out using USP apparatus type II [paddle] in simulated gastric fluid [pH 1.2±0.1] for the first 2hrs and in phosphate buffer pH 6.8 from 3 to 12hrs. Rotation speed of 100rpm at temperature of 37± 0.2°C and dissolution medium of 900ml was maintained throughout the experiment. At predetermined time intervals, 5ml of samples were withdrawn and fresh dissolution medium was replaced after each withdrawal. The samples withdrawn were filtered through 0.45µ membrane filter, and absorbance was measured spectrophotometrically at 248nm using a UV-visible spectrophotometer and cumulative percent drug release was calculated. All dissolution studies were carried out in triplicate.

The same was carried out on commercial Ambroxol SR capsules for comparative evaluation. The rate and mechanism of release of Ambroxol hydrochloride from the prepared matrix tablets were analyzed by fitting the release data in to Zero-order, First order, Higuchi’s equation and Korsmeyer model.  The value of n is <0.45 for fickian release,  > 0.45 and < 0.89 for non-fickian release, 0.89 for the case II release and > 0.89 for  super case II type release.

Similarity factor was calculated for the optimized formulation [F5] with the marketed sample using the formula f2 = 50 + log {[1+ [1/n] ∑t=1 * n [Rt-Tt]2]-0.5 *100} where n is the number of dissolution sampling times,  Rt and Tt are the individual or mean percent dissolved at each time point for the reference and test dissolution profiles respectively.

Stability studies were conducted on Ambroxol hydrochloride matrix tablets containing 10% W/W olibanum resin to assess their stability with respect to their physical appearance, drug content and drug release characteristics after storing them at 45°C with 75% RH for 45 days.

IR spectra of the pure drug and the optimized formulation F5 was compared and no interaction was observed between the  drug and polymer used for the study as there is no shift of positions of the bands in both the spectra shown in Fig.1, 2, 3. The IR   spectrum shows  that both  drug  and  polymer  were  not  interacted  each other and appear as separate entities which is clearly shown in the spectra. Both hydroxyl and secondary amino group stretching vibration were merged to each other and therefore appear on single strong broad band at 3393.82 cm-1 for Ambroxol pure drug. In case of Ambroxol and secondary amine of Ambroxol vibrations were merged to each other and appear as a single broad hydrogen bonded band for F5 the peak was at 3391.93 cm-1. 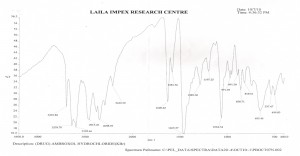 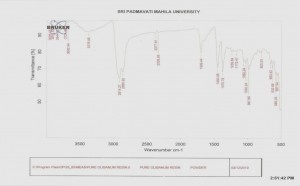 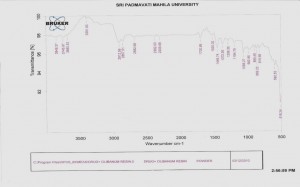 The prepared granules were evaluated for angle of repose, loose bulk density (LBD), tapped bulk density (TBD), compressibility index (CI) and Hausner ratio given in Table 2. The angle of repose of all the formulations granules was found to be in the range of 25-30° for which the flow was found to be excellent and except F1 shows the flow was good. Based on the CI, HR for the formulations F3, F4, F5 and F6 the flow was good and for F1, F2 the flow property was fair.

* All the values are expressed as mean± SD, n=5

The compressed tablets were evaluated for physical properties like weight variation, hardness, friability and content of active ingredient. The results obtained were within the prescribed limits. The results are tabulated in the Table 3.

*All the values are expressed as mean ±SD, n=5 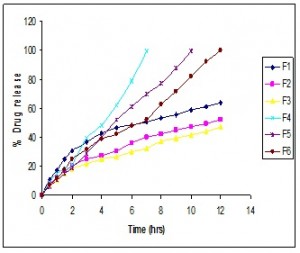 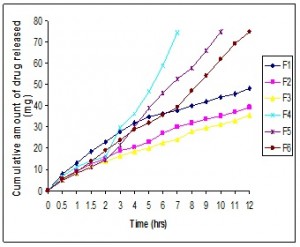 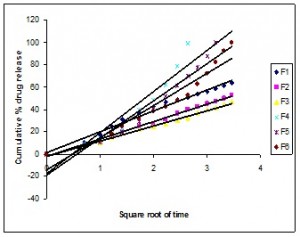 With olibanum resin firstly 1:1, 1:1.5, 1:2 ratio’s [F1, F2, F3] were formulated but even at the 12th hour the release was too low. So, a 5%, 10% and 15% resin containing formulations were prepared and conducted drug release studies. 5%, 10% resin containing formulations (F4, F5) failed to sustain the drug release till 12th hour but F5 gave a close release profile with that of MS so F5 was selected as optimized formulation. F6 with 15% resin showed 99.86% drug release at 12th hour. The release data of matrix tablets were fitted into various mathematical models to evaluate the kinetics and mechanism of drug release from the tablets (Fig. 4, 5, 6). The model that best fits the release data is selected based on the correlation coefficient (r2) value in various models. The model that gives high “r2” value is considered as the best fit of the release data. The “r2” values for zero order, first order, Higuchi model and Korsmeyers-Peppas plot are given in the Table 4.

Similarity factor was calculated for the formulations, it was found that F5 formulation is to the release profile of marketed sample showed in the Table 5, hence it was optimized and subjected for further studies.

The optimized Ambroxol hydrochloride matrix tablets F5 were packed in amber colored screw capped bottles and subjected to short term stability studies at 45°C with 75% RH for 45days as per ICH guidelines showed negligible change over time for the parameters like appearance, the drug release profiles, drug content, T50 and T90 (Table 5).

CONCLUSION: The present study was to make an evaluation of sustained release matrix tablets of Ambroxol hydrochloride formulated with olibanum resin as a release retardent and to conduct the drug release kinetics to assess the drug release mechanism. From the studies it was concluded that olibanum resin successfully control the early release of drug and extends the release till 12 hours. Release of drug was followed diffusion and erosion mechanism. The %W/W of polymer plays a major role in overall release of the drug and the formulated matrix tablets with 10% olibanum resin offered comparative release profile with that of marketed sample.