Oral drug administration has been the predominant route for drug delivery due to the ease of administration, patient convenience and flexibility in formulations. Mucoadhesive tablets of Cephalexin monohydrate were prepared with an objective to increase the bioavailability by minimizing the first pass metabolism and also to reduce the frequency of administration. Carbopol 934p as a primary polymer and HPMC K15M, HPMC K4M, and HPMC K100M as secondary polymers in different proportions has been used to formulate the desired mucoadhesive formulation with other tablet excipients and lubricants to give good compressibility by dry granulation method. The tablets were characterized by weight variation, hardness, thickness, friability, swelling ability, dissolution profile,  assay and mucoadhesive strength. The selected mucoadhesive formulation FC2 exhibited 99.51% of drug release in 24 hrs, the mucoadhesive strength was found to be 95.04 gm so it has enough strength to adhere on the mucosa for an extended period of time. Kinetic study has been studied for the selected formulation it follows zero order release and matches with Higuchi regression. Selected formulation FC2 showed no significant change in the physico chemical parameters after storage at 40OC±2 OC and 75% RH±5% for one month.

INTRODUCTION: Gastroretentive systems can remain in the gastric region for several hours and hence can significantly prolong the gastric residence time of drugs. Prolong gastric retention improves bioavailability, reduces drug wastage, and improves solubility for the drugs that are less soluble in the high pH environment of small intestine 1. It has applications also for local drug delivery to the stomach and proximal small intestine. Therefore different approaches have been proposed to retain the dosage form in the stomach. Those approaches include synthesis of high density dosage form, flotation, sedimentation, expansion modified shape systems, comitent administration of drugs or excipients which slows the motility of stomach or small intestine, synthesis of bioadhesive or mucoadhesive dosage forms 2. Proximal small intestine (duodenum), the most effective strategy will be holding the formulation in the stomach 3.

Mucoadhesion is the state in which two materials, at least one biological in nature, are held together for an extended period of time by interfacial forces. It is also defined as the ability of a material (synthetic or biological) to adhere to a biological tissue for an extended period of time 4. Cephalexin monohydrate is a semi synthetic antibiotic derived from cephalosporin ‘C’. It is absorbed completely (80—100%) after oral administration and the protein binding of cephalexin is low (6-15%). The volume of distribution is 15 ± 2.3 l. Cephalexin is not metabolized in the body and is excreted unchanged in the urine at least two thirds by active secretion and  having a biological half-life of 1 hr. To maintain therapeutic range, the drug should be administered 3—4 times a day, which leads to saw tooth kinetic and resulting in ineffective therapy. It treats most of the bacterial infections like otitis media, tonsils and adenoids, strep throat, laryngitis, acute bronchitis, urinary tract infection, pneumonia, jock itch, diverticulitis, impetigo, folliculitis 5.

The main objectives of the present work was to formulate cephalexin monohydrate mucoadhesive tablets by using Carbopol 934p as a primary polymer and HPMC K15M, HPMC K4M, and HPMC K100M as a secondary polymers in different proportions, with other tablet excipients and lubricants to give good compressibility by dry granulation method, which can provide constant effective drug release for 24 hours.

Procedure: The components of each formulation sufficient for 100 tablets were calculated and weighed except the lubricant, mixed and passed through the mesh (40m) and triturated well in a glass mortar to ensure homogeneous mixing. Then this mass is compressed with more hardness with 12.5 mm round flat punches (slugging). Then these tablets are crushed and passed through 8 mm screen to form the granules, which is suitable for compression. The lubricants were weighed and mixed with the granules and compressed using 12×8 mm length die oblong punches on 16 station tablet compression machine (Cadmach Ahmadabad).

Physical characteristics of granules before compression: The flow angle of repose can be determined by fixed funnel method. The bulk density and tapped density were determined by the cylinder method. Compressibility index and hausner ratio was calculated by using following formula 6, 7, 8.

Determination of various physicochemical parameters for tablets: The weight variation can be tested by taking twenty tablets were weighed individually and the average weight was determined. The percentage deviation was calculated and checked for weight variation. The thickness of the 10 tablets of each formulation was measured using digital vernier calliper in mm. Hardness can be determined using a Monsanto hardness tester.

Pressure required to break the tablet is determined in kg/cm2. Friability can be tested by taking 20 dedusted tablets and the percentage friability was calculated. The assay was carried out taking 20 tablets by liquid chromatographic method as per the specified monograph 9.

Swelling studies: The tablets of each formulation were weighed individually (designated as W1) and placed separately in petri dishes containing water. At regular intervals (1, 2, 4, 8, 12, 16, 20, and 24 hr), the tablets were removed from the petri dishes and excess water was removed carefully by using filter paper 10. The swollen tablets were reweighed (W2), the swelling index of each formulation was calculated using the formula,

In-vitro release studies: The release of Cephalexin monohydrate from mucoadhesive tablet was determined by using USP dissolution test apparatus II (paddle type). The whole assembly is kept in a jacketed vessel of water maintained at 37± 10 C. Mucoadhesive tablet is stuck on to the bottom of the flask (so as to allow one sided release from the tablet). The beaker is filled with 900ml of water and maintained at 100 rpm. A sample of 3ml of the solution was withdrawn from the dissolution apparatus at 4 hour time intervals and filtered through Whattmann filter paper no: 42. It is replaced immediately with an equal amount of fresh water. The samples are then analyzed UV spectrophotometrically at 261 nm. Absorbance measured and % drug release was determined 9.

Detachment force measurement: This is the method used to measure in-vitro mucoadhesive capacity of different polymers. It is a modified method developed by Martti Marvola to assess the tendency of mucoadhesive materials to adhere to the oesophagus. The assembly of this apparatus consists of two glass slides; one modified physical balance, weights, thread, goat intestine, tyrode solution, distilled water and a beaker to hold the water 11.

Method: Immediately after slaughter, the intestines was removed from the goat and transported to laboratory in tyrode solution is (g/litre); (sodium chloride 8 gm; potassium chloride 0.2 gm; calcium chloride 2H2O 0.134 gm; sodium bicarbonate 1.0 gm; sodium dihydrogen phosphate 0.05 gm and glucose H2O 1gm). During this experiment take the intestine in a specified area and place it on one glass slide and tie it. The glass slide with the intestine was affixed on one side floor below the modified physical balance. Already prepared 200 mg plain polymer tablet was pasted in another glass slide and it balanced in the assembled physical balance with a beaker in other side which is used to hold the water. Now the balance was calibrated.

Recording of Adherence: The plain polymer tablet in the slide was left on the intestine segment slide and lightly pressing the intestine segment with a forceps, the assembly should be kept undisturbed for a fixed time interval 5, 10, 15 and 30 minutes. Then water was added slowly in drop wise to the beaker aside. The amount of water required to pull out the tablet from the intestinal segment represents the force required to pull the tablet against the adhesion. The above same procedure is repeated for the comparative study between HPMC K15M, HPMC K4M, HPMC K100M and Carbopol 934p. The force in Newton’s is calculated by the equation,

The linear equation for zero order drug release plot is:

The linear equation for first order release plot is;

Thus a plot of [1 – Mt / M] 1/3 versus the time will be linear. If the release of drug from the matrix is erosion controlled. In order to ascertain whether the drug release occurs by diffusion or erosion, the drug release data was subjected to following modes of data treatments 13,

Stability Study: Selected formulation FC2 was subjected to determine its shelf life i.e. stability study by using accelerated stability chamber, according to the WHO guidelines. The tablets were stored in the stability chamber under temperature 40oC + 2oC and 75% RH + 5 % Relative humidity for one month. After the specified period the tablets are subjected to physical appearance, hardness, friability, dissolution and assay.

RESULTS AND DISCUSSION: Mucoadhesive Cephalexin tablets were prepared to increase the gastric retention of the dosage form so that they can be retained in the stomach for longer period of time and help in controlled release of drug up to 24hr. The mucoadhesive tablets were made using gel forming mucoadhesive such as Carbopol 934p, HPMC K4M, HPMC K15, and HPMC K100M. To achieve the desired release the HPMC polymers (different grades) has been used in different proportions. Due to the changing the concentration of polymers the release rate will vary consequently. The granules ready for compression has been evaluated   The prepared mucoadhesive tablets were evaluated thickness, weight variation, friability, hardness, in-vitro dissolution study, assay, swelling study and mucoadhesive strength.

Physio chemical characteristics of mucoadhesive tablets & granules: The prepared granules were evaluated and reported in the table 2.The flow property, bulk density and tapped density was found and the results are within the IP specification. The tablets were off-white oblong shaped concave appearance. The results of physiochemical characterisation of prepared tablets are shown table 3. The weight variation of all formulation was found to be within the range of -1.7 to +2.9%. The thickness of mucoadhesive tablets ranged between 8.97 to 9.18 mm. The hardness of the tablets was found in the range of 6.2 to 7.3 kg/cm2. All tablets from all formulation showing satisfactory results as per Indian Pharmacopoeia. 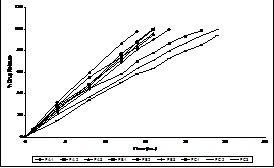 Kinetics of Drug Release: The data obtained from in-vitro dissolution studies were fitted to zero order, first order, Higuchi, and Hoffenberg equations to confirm the order of the release. The data obtained from the calculations are shown in the table 6. From this data the drug release followed zero order release kinetics and it follows the diffusion mechanism for drug release. The FC2 formulation follows Zero order drug release (0.996) as well as diffusion (Higuchi) mechanism to release the drug from the formulation (0.946).

CONCLUSION: From the obtained results it can be concluded that all the formulations satisfy the official limits for preformulation study, hardness, thickness, friability and weight variation. Formulation FC2 (Carbopol 934p&HPMC K100M)  satisfies the in-vitro drug release up to 24 assay value also satisfies the IP limit and considered as the best formulation comparing to all other formulations. Mucoadhesive strength was studied for the selected formulation and it shows high mucoadhesive strength and Stability study was passed as per specification. The selected formulation follows the zero order release and exhibited diffusion dominated drug release.  Further in-vivo and continuation of stability study are recommended.

ACKNOWLEDGEMENT: We the authors are very much thankful to Dr. JKK Munirajah, M. Tech (Bolton), D. Litt, Managing Director, JKKM Group of Institutions for his support and encouragement. Authors are also thankful to M/S Elegant drugs private Ltd., Hubli for providing all facilities to complete the research work.