O. turpethum is the source of the drug known as Turpeth or Indian Jalap and it is widely grown throughout India and it is occasionally cultivated in gardens as an ornament. It has been used as a traditional medicine in many countries. The root is prescribed in scorpion sting and snake bite. The roots are bitter, acrid, sweet, thermogenic, purgative, carminative, antihelmintic, expectorant, antipyretic, hepatic, stimulant and hydragogue. They are useful in colic constipation, dropsy, vitiated conditions of vata, paralysis, myalgia, arthralgia, pectoralgia, bronchitis, obesity, helminthiasis, gastropathy, ascites, inflammations, intermittent fever, leucoderma, puritus, ulcers, erysepelas, haemorrhoids, tumors, jaundice, ophthalmia, employed in drug formulations, dropsical effusions and rheumatism. Some of the Ayurvedic preparations are Trivritaadi ghrita, Trivritadi kwaatha, Abhyarishta, Kaishorgugglu and Chandraprabha vati. It is the best amongst the herbs used for Virechana (i.e. therapeutic purgation), one of the procedures of Ayurvedic Panchakarma therapy. This review comprehensively incorporates the medicinal uses, and pharmacology of O. turpethum. The plant, Operculina turpethum is endangered so it also prompts attention to protect it from extinction.

INTRODUCTION: The Ayurvedic concept appeared and developed between 2500 and 500 BC in India. The literal meaning of Ayurveda is “science of life,” because ancient Indian system of health care focused views of man and his illness1. Ayurveda remains an important system of medicine and drug therapy in India. Phytochemicals are the primary active ingredients of Ayurvedic drugs.

Today the pharmacologically active ingredients of many Ayurvedic medicines are being identified and their usefulness in drug therapy being determined and high percentage of plants are used in traditional medicines. It is estimated that of the discovered 17,000 species, nearly 3,000 species are used in medicinal field 2.

The practice of Ayurveda therapeutics consisted of 8 sections divided into 180 chapters and listed 314 plants, which are used as medicines in India 1. The Indian subcontinent is a vast repository of medicinal plants that are used in traditional medical treatments 3. Many Westerners have long regarded the Indian systems of medicine as a rich source of knowledge 1.

In India, around 20,000 medicinal plants have been recorded however traditional communities are using only 7,000 - 7,500 plants for curing different diseases 4. The medicinal plants are listed in various indigenous systems such as Siddha, Ayurveda, Amchi, Unani and Allopathy with specific species for various ailments 3 Sarangdhara mentioned detailed information about various formulations with respect to their methods of preparation as well as basic standards and are documented in Sarangdhara Samhita. The medicinal plants contain several phytochemicals such as Vitamins (A, C, E, and K), Carotenoids, Terpenoids, Flavonoids, Polyphenols, Alkaloids, Tannins, Saponins, Enzymes, and Minerals etc. These phytochemicals possess antioxidant activities, which can be used in the treatment of multiple ailments 5.

Operculina turpethum Linn is convolvulaceous plant which is found throughout India, China, Ceylon, Australia.  The bark of the fresh root is rubbed up with milk and administered as purgative 6. Trivrit has two varieties as Aruna or Shweta (i.e., having whitish or reddish coloured root) & Shyama (i.e., having blackish root). The botanical name of Aruna or Shweta Trivrit is Operculina turpethum (L.) Silva Manso (syn. Ipomoea turpethum), whilethat of Shyama is Ipomoea petaloides chois 7.

The active principle of the leaves is a cardiotonic substance named oleandrin. The roots, bark and seeds contain cardio-active glycosides, formerly designated as neriodorin, neriodorein and karabin 6. It also contains b-sitosterol, a- and b-turpethin, coumarin, scopoletin, lupeol, betulin. The fresh juice of leaves is dropped into the eyes for inducing lachrymation in ophthalmia.

Macroscopic: It is a perennial aromatic creeper with a simple stem, triangular or rectangular stems. Leaves are many and are oval in shape, 2 to 5 inch in length. It consists of cylindrical pieces of root and stem, 1.5-15 cm. long x 1-5 cm. diameter, often with central woody portion removed by splitting the bark on one side, external surface longitudinally furrowed giving the drug a rope-like appearance, fracture short in bark and fibrous in wood, odor distinct but unpleasant or musty, taste somewhat like bland at first, then slightly acrid.

The pieces of root are cylindrical, somewhat twisted and externally of a dull gray color 16. The flower presentation is 1 to 4 inch long and has 3 to 4 branches that bear white flowers. Fruit is round ½ or ¾ inch in diameter, it bears 4 shiny 2 inch long seeds. The plant bears fruits and flowers from March to December. 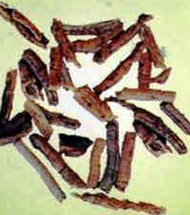 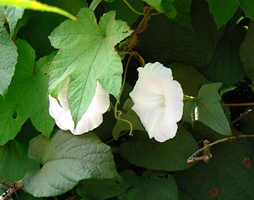 PHARMACOLOGY: It is a vata and pitta moderator. It helps in improving the peristaltic movements in the body therefore are used as laxative. It is anti-inflammatory in action because of its hot potency. It also helps in managing the normal body temperature.

According to Ayurveda it contains:

Chemical Constituents: Upon literature survey, it was found that the active principle of the plant is glycosidic resin. The scopoletin, a coumarin derivative, turpethinic acid and its derivatives were isolated from the plant. Boutron-Chalard found in turpeth root a volatile oil, albumen, starch, a yellow coloring matter, lignin, salts, and ferric oxide. The root contains 10 percent of resin. According to Spirgatis this resin is a glycoside, turpethin like that of other Convolvulaceae, insoluble in ether, but soluble in alcohol.

Medicinal Uses: Turpeth has long been in use in India as a purgative, i.e., a drug, which hastens active movement of the bowels, but it was officially acknowledged in the list of Indian Pharmacopoeia only in 1946. Only the dried roots of the white variety with its undamaged bark find its place there. The roots are bitter, acrid, sweet, thermogenic, purgative, carminative, antihelmintic, expectorant, antipyretic, hepatic, stimulant and hydragogue20. They are useful in colic constipation, dropsy, vitiated conditions of vata, paralysis, myalgia, arthralgia, pectoralgia, bronchitis, obesity, helminthiasis, gastropathy, ascites, inflammations, intermittent fever, leucoderma, pruritis, ulcers, erysepelas, haemorrhoids, tumors, jaundice, consumption and ophthalmia 21.

Chronic Constipation cured by turpeth: Turpeth is used as a laxative. It has virtually similar properties as the true jalap, botanically known as `Exogonium purga` and can be used with benefit as its alternative. It is a better-quality herb compared to rhubarb. Its pulverized roots are used as a laxative and to alleviate any acute constipation 22.

Arthritis cured by turpeth: The drug is advantageous in treating rheumatic and paralytic diseases. A single dosage of 3 to 4 grams should be taken everyday.22

Dropsy healed by turpeth: Turpeth is a priceless drug for treating dropsical infections. The tuberous roots in dosages of 2 to 4 grams, blended with Chebulic myroblan (harad) are particularly valuable in such disorders 22.

Gout healed by turpeth: Turpeth is administered in an equivalent manner like dropsical infections for the treatment of gout.22

Jaundice cured by turpeth: In Ayurveda, turpeth is regarded one of the two indispensable drugs with which the treatment of jaundice should begin. One or two teaspoon of the grind of each of the two drugs may be dispensed with hot water twice everyday.22

Anti-venom: The root purgative and prescribed in scorpion sting and snake bite. Other Diseases healed by turpeth. Turpeth is also efficacious for other diseases like melancholia, leprosy, enlargement of spleen and paralysis. Its effectiveness magnifies threefold when mixed with chebulic myroblan 23-24.

Ayurvedic Formulations: There are at least 135 herbal and herbomineral formulations used in Ayurvedic medicine, which contain Trivrit as their vital ingredient. The concise list of commonly used formulations and their indications is given.

Common Ayurvedic Formulations of Trivrit with their Indications:

Precautions: Its use in children or in physically or mentally weaker persons or overdose of Operculina turpethum may lead to complications like excessive purgative activity, bleeding per rectum, vomiting, abdominal pain, chest pain, dehydration, hypotension, vertigo, confusion, shock, & unconsciousness.26 It  should not be used in pregnancy, in children below 12 years of age, in elderly, in physically or mentally weaker persons, and in persons suffering from diarrheoa, bleeding per rectum, rectal prolapse, or fecal incontinence 27. Trivrit may act as an abortificient when used in pregnant ladies.

CONCLUSION: Operculina turpethum is a convolvulaceous plant which is found throughout India, China, Ceylon, Australia, and is occasionally cultivated in botanical gardens as an ornamental plant. There are two varieties, viz., Sveta or white turpeth, and Kirshna or black turpeth 7. Operculina turpethum, which is commonly known as trivit, is a large stout perennial twinner with milky juice and fleshy branched roots. It is one of the plants mentioned in the literature having claims of activity against liver disorders.

It also has antihelmintic, expectorant, antipyretic, anti-inflammatory and purgative properties. It contains a wide variety of phytoconstituents, which are useful in treatment of different ailments and includes glycosidic resin, coumarins, β-sitosterol, and essential oils. Few toxicity studies done in rodents have confirmed the safety of both crude powder and extract of O. turpethum 28. The bark of the plant contains a glycosidic resin, which has the insoluble glycoside turpethein and two ether soluble glycosides. In addition, it also contains a minor amount of essential oil, glucose and fructose 29.

ACKNOWLEDGEMENT: The authors are thankful to the authorities of Banasthali University for providing support to the study.