The direct delivery of therapeutically active drug to the pulmonary tract has proved to be a life saving tool for many Asthmatics. Salbutamol being a drug of choice in severe Asthma attacks, in the present study attempt was made to prepare MDI of Salbutamol in suspension formulation and compare it with the marketed MDI of salbutamol suspension.  The proportion of C.F.C. propellant blend (p11 & p12) in 30:70 proportion gave optimum vapor pressure; in the range of 70-75 psig was selected. Oleic acid was selected as a surfactant and its concentration was optimized. A series of physicochemical tests were performed simultaneously on both the preparations. Results were compared. The formulations were further subjected to in-vitro evaluation whereby net respirable fraction was determined. Logic behind this study was to create a better suspension than that available in the market. In all qualitative as well as quantitative tests the formulated suspension was comparable with marketed MDI. However our formulation retained minimum amount of drug (8.57%) on adaptor compared to the marketed preparation (10.40%). This shows the maximum availability of the drug in the pulmonary tract.

INTRODUCTION: Delivering small doses of active ingredient directly to the lungs effectively localizes the drug thereby maximizing therapeutic effect while minimizing unwanted side effects. In the treatment of pulmonary disorders and in some cases, for systemic action, inhalation is the preferred route of administration. Bronchodilators 1, anti-inflammatory agents 2, mucolytics, antiviral agents 3 and phospholipids protein mixtures for surfactant replacement therapy are all routinely given as aerosolized formulations. Recently pentamidine has been delivered via the lung to treat Pneumocystis carinii pneumonia associated with AIDS 4. The development of potent protein drugs by biotechnology has also stimulated a growth of interest in inhalation aerosols because of the possibility of systemic delivery of these drugs via the airways 5.

Metered Dose Inhalations (MDI) are fine dispersions of solid particles in gas packed in pressurized containers. The drug is expelled by a metered valve in a prefixed volume from a volatile propellant. Currently accepted theory of asthma development considers it multifactorial in origin and progression and centers on the clinical triad of bronchial inflammation, hyper-reactive smooth muscle activity and reversible airflow obstruction. The changes that occur with asthma are primarily the result of inflammatory events with the airway.

These events include cellular infiltration and release of inflammatory mediators such as histamine; prostaglandins D and F; thromboxane; leukotrienes C4, D4, and E4; platelet activating factor; bradykinin, adenosine; substance P; neurokinin A and serotonin. These substances all produce bronchoconstriction.  Many of these mediators produce at least part of their effect by directly acting on bronchial smooth muscles; while some produce at least part of their broncho-constriction through stimulation of afferent cholinergic receptors 6. The etiology of asthma is poorly understood, but resistance to airflow is increased by a number of factors including constriction of the airways smooth muscle, the lumen and thickening of the airway epithelium 7.

The principal symptom of Asthma is dyspnea (breathlessness), wheezing, cough and chest tightness. For immediate action of the drug, it should be distributed uniformly in the lungs. Salbutamol or Albuterol is a short-acting β2-adrenergic receptor agonist. β- Agonists are functional antagonists of bronchoconstriction mediators in that they reverse smooth muscle contraction regardless of the stimulus. Salbutamol is used as bronchodilator in the management of disorders involving reversible airway obstruction such as Asthma and in some patients with chronic obstructive airway diseases. Salbutamol (Albuterol) is (RS) - 1- (4-hydroxy- 3- hydroxymethylphenyl) - 2-(tert-butylamino)ethanol.It is sparingly soluble in water.

In case of suspension formulations, the substances that are insoluble in the propellant are dispersed in suitable propellant vehicle. The propellant is described as “liquefied gas with a vapor pressure greater than atmospheric pressure (14.7 psi) at a temperature of 105oF”. It supplies the necessary pressure to expel material from the container, when the valve is opened. Good solvent power, purity, stability, low toxicity, freedom from irritation, non-flammability, non-explosiveness, non-reactiveness, freedom from odor and color are the fundamental requirements of a propellant 8. It is important to select an appropriate propellant system, so as to get the optimum vapor pressure.  Surfactants in aerosol formulation are extremely important. These agents maintain the disperse nature of the drug in propellant blend and provide lubrication for operation of the metering valve. They also help to alter the lipoidal solubility thereby enhancing the pulmonary absorption rates of the active ingredient and act as permeation enhancer by reducing the interfacial tension between drug surface and lung membrane. Their concentration has to be optimized.

MATERIALS: Salbutamol was a gift sample from Cipla Limited. Marketed MDI was purchased from local market. All other chemicals used were of analytical grade.

(The filling of the propellant was carried out with the help of filling unit operated under nitrogen pressure 15 lbs/Kg cm2). Throughout the process, the temperature was maintained at 20-22°C and humidity not more than 40%RH (In order to minimize particulate and microbial contamination). 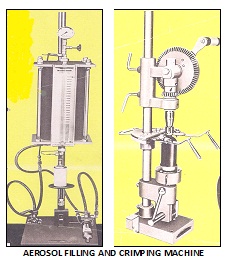 TABLE 1: SELECTION OF A PROPELLANT BLEND

TABLE 3: OPTIMIZATION OF CONCENTRATION OF OLEIC ACID IN MDI SUSPENSION

The MDI under evaluation was sprayed on a glass slide. The slide was rinsed with CCl4 to prevent the excipient particles from interfering with the measurement of the drug particles. After sufficient rinsing with CCl4, the slide was placed under the microscope and particle size was measured by using 100X magnification with oil immersion method. 100 particles in 25 different fields were measured. The results are tabulated in Table 5B as the number of particles ≤3μm and between 3-5μm.

TABLE 7: COMPARATIVE STUDY OF SALBUTAMOL MDI PREPARATIONS, BASED ON EVAPORATION RATE AND NUMBER OF DELIVERIES PER CONTAINER

The test was performed in triplicate to check the reproducibility of the results. The       results are given under Table 8.

Each time the canister was shaken thoroughly keeping 5 seconds gap between each spray. Absorbance of the resulting solution was measured at 246nm and the salbutamol content was determined by the method described below. The solution obtained after firing ten deliveries from the MDI was collected in a beaker containing methanol. This was introduced into a 100ml volumetric flask which contained 10ml of 0.1N NaOH solution. The volume was made up to 100 ml mark using methanol and the absorbance of the resulting solution, (conc. 10mcg/ml) was recorded at 246nm (I). To the remaining contents of the volumetric flask 0.5ml of conc. HCL was added and the absorbance was again measured at 246nm (II). The net reading was obtained by subtracting (II) from (I). A standard solution was prepared by weighing approximately 50mg of standard salbutamol (I.P) in a 100ml volumetric flask containing 10ml of 0.1N NaOH. The volume was made up using methanol. From the resulting solution, a 2ml aliquot was taken and diluted to 100ml with methanol.

The resulting solution (conc.10mcg/ml) was measured for its absorbance at 246nm (I). To the remaining solution 0.5ml of conc. HCL was added and the absorbance was measured again at 246nm (II). The net reading was obtained by subtracting (II) from (I). The content per spray of the MDI was calculated using formula:

The results are recorded under  Graph-1 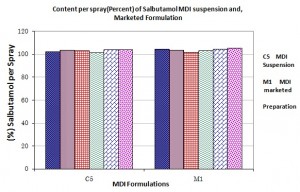 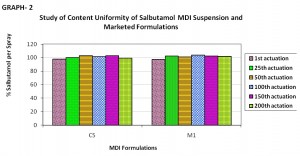 At the time of spraying from MDI, some amount of drug may get retained on the adaptor. This represents the wasted drug which is not available for inhalation and hence to be restricted to minimum. Ten deliveries as indicated in the ‘Content per Spray’ test were fired through MDI with adaptor attached to it. The components of the MDI were separated and rinsed with methanol. The collected solution was analyzed for the content of salbutamol by the procedure described in the previous test. The results are described under Table- 9

TABLE 9: RETENTION OF THE EMITTED DOSE ON THE ADAPTOR OF SALBUTAMOL MDI

Upper Impinger Chamber: MDI was attached to the equipment by means of a rubber collar of the upper impinger chamber. The throat consists of modified glass tubing with precise diameter. This tubing is attached to a round bottom glass reservoir of 50ml capacity and contained 7ml of the analyzing liquid.

Lower Impinger Chamber: Flask I is connected to the lower impinger by means of a coupling glass tube. The tube has a plastic screw cap and a side arm outlet which can be connected to the vacuum pump. The lower jet assembly is made up of polypropylene filter holder. This is connected to a lower end of a plastic coupling tube. The filter assembly consists of a circular disc comprising of 4 jets arranged on a projected circle of diameter 5.3mm. The stage II terminates with a conical flask of 250ml capacity. This contains 30ml of the analyzing liquid. The amount of active ingredient deposited in this stage represents the “Net Respirable Fraction”. The fraction is supposed to mimic the amount of drug bioavailable to the lungs for exerting the required therapeutic effect.

Method: The two collecting chambers were filled with the required amount of distilled water (7ml in stage I and 30ml in stage II). The MDI was attached to the device by means of the rubber collar. 10 sprays were fired into the apparatus.

The side arm tube was connected to the vacuum pump. The flow rate was adjusted to 60ltr/min with the help of Flow-Meter. This mimics the respiratory or Inspiratory flow rate of normal individual. A gap of 5 seconds was maintained between two successive sprays. The reservoir was rinsed with the distilled water. The amount of drug deposited on the adaptor, collar and valve termed as device and stage I represents the fraction of the drug that is not available for inhalation or the ‘Non-respirable Fraction’. The amount of drug deposited in stage II, is the amount of drug available to the lungs and represents the ‘Net Respirable Fraction’. The results are indicated in Table 10.

Formulation C5 with 10 mg of oleic acid had maximum number of particles in the size range of <3 μ. All the quality control parameters were found to be satisfactory for this formulation. Hence the amount of oleic acid to be added in formulations was optimized for 10mg per canister and further studies were performed.

CONCLUSION: In all the six samples amount of salbutamol retained on adaptor was less than marketed MDI. This represents the wasted drug which is not available for inhalation is restricted to minimum. The study shows that the suspension prepared was better than marketed M.D.I. with respect to retention on  adaptor.

ACKNOWLEDGEMENT: The authors would like to thank to  S.N.D.T. University’s, C.U. Shah College of Pharmacy, Santacruz (w), Mumbai. for providing laboratory facilities and  Cipla India Limited for sending a gift sample of salbutamol.