INTRODUCTION: The recent advance in the development of new remedies for the treatment of type 2 diabetes mellitus is a result of the increase in the incidence of this disease, as well as the high percentage of associated co-morbidities and deaths 1.  The thiazolidinediones are peroxisome proliferator-activated receptor gamma (PPARγ) agonists which were designed to manage type 2 diabetes mellitus owing to their ability to improve insulin sensitivity through actions which are completely different from those of other oral hypoglycaemic drugs 2.  Unfortunately, these drugs have been associated with a number of undesirable effects including fluid retention, weight gain 3, and an increase in risk of myocardial infarction 4.

This resulted in rosiglitazone being withdrawn from the European market, and in its restricted use within the US 5.  The different clinical profiles observed when different thiazolidinediones were compared are indicative of the potential for continued innovation within this class of drugs 6.

The study investigates, through a de novo drug design approach, two different bound conformations of the PPARγ receptor, as exemplified by its binding to rosiglitazone and that to farglitazar. These dissimilar conformations are the result of amino acid side chains orienting themselves differently around different ligands within the same receptor 7.  This is particularly encouraging from a drug design perspective since the PPARγ ligand binding pocket (LBP) appears to be capable of accommodating structurally diverse molecules.

This signifies that it would be possible to identify novel structures with the ability to bind to, and potentially activate this receptor and achieve normo-glycaemic status among type 2 diabetics for an acceptable side-effect profile. Salam et al. (2008) 8 sought to exploit the crystallographic data describing the varied conformations of the PPARγ LBP by performing a virtual screening exercise using a previously constructed in-house natural product library in order to indentify novel molecules with known affinity for the PPARγ and promising in vivo bioavailability.  The current study emulates that of Salam et al., (2008) 8, but differs essentially in the adoption of a de novo based approach using the structure of the previously identified PPARγ agonist farglitazar.

Tyrosine-based PPARγ agonists, such as farglitazar, have shown potent glucose-lowering activity in vivo9 and have therefore been chosen as the basis for development of novel high affinity molecules in this study. 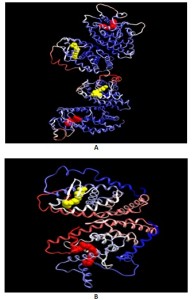 FIGURE 1: 1FM6 (A) AND 1FM9 (B) AS FOUND IN THE PDB; THE RXR RECEPTORS CAN BE SEEN BOUND TO RETINOIC ACID (YELLOW), AND THE PPARΓ RECEPTORS BOUND TO ROSIGLITAZONE (RED). Generated using Molsoft ICM Browser® 12.

The crystallographic depositions were read into Sybyl®13 and simplified in silico in preparation for estimation of ligand binding affinity (LBA) (pKd).  Simplification was performed in such a way that the bound coordinates of the ligand were retained and used as templates for further drug modeling.  The simplification process included the;

The retinoic acid bound to the retained RXR moiety was not removed owing to the fact that literature indicates that retinoic acid causes a conformational change in the PPARγ moiety which alters LBA of the latter receptor for its cognate ligand 7.

The final outcome was a holo RXR receptor bound to the apo form of PPARγ for both crystallographic depositions. The bound co-ordinates of the small molecules rosiglitazone and farglitazar were saved separately.  Estimation of binding affinities was carried out using the score algorithm 14.

High affinity conformers of farglitazar and rosiglitazone were then generated using the Similarity Suite in Sybyl® 13, which has the ability to generate viable binding conformations of potential ligands for an active site based on common 3D volume and proximity of important binding moieties. Farglitazar was therefore optimally docked into the rosiglitazone bound PPARγ LBP (1FM6) 7 and rosiglitazone into the farglitazar bound PPARγ LBP (1FM9) 7.  The result of this process was a preset number (n=21) of the highest affinity conformers for each ligand, output in a single mol2 file, the contents of which were then individually visualized with ligand binding affinity (pKd) and energy being calculated in XScore® 14.

Rosiglitazone (the molecule co-crystallized with 1FM6) and the highest binding affinity (pKd) conformer of farglitazar were both used as probes in order to generate 3D maps and pharmacophores of the rosiglitazone bound PPARγ LBP (1FM6).  These were then compared in order to determine and evaluate the extent of any differences between the two.  LBP mapping and general pharmacophore identification was carried out in LigBuilder® 16, a program that designs small molecules de novo within the constraints of a pre-defined binding pocket. The first module of LigBuilder® 16, namely Pocket, was used in this part of the study.

The next part of the study was carried out in order to design novel molecules with antidiabetic properties and a more acceptable side-effect profile, which do not fall under the glitazone class. Molecular modeling was carried out using Sybyl® 13 and de novo design was executed using LigBuilder 16.  The seed was essentially the tyrosine moiety in farglitazar which was planted into the farglitazar bound PPARγ LBP at a locus analogous to that which it would have occupied had the farglitazar molecule itself been docked 17 (Figure 2). 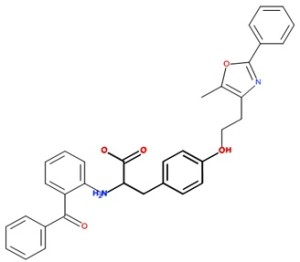 Growing sites were then established through atom type assignation in which the atom type H.spc was recognizable to the Grow algorithm in LigBuilder®16 as a site on which fragment attachment could occur.  Two seeds were used for this study.

Both seeds had two potential growing sites, the first, that on the hydroxyl hydrogen attached to the benzene ring which was common to both.  The difference lay in which of the two amine hydrogens was allowed growth as depicted in Figure 3 below.

The result of this process was a number of analog families which were ranked according to predicted binding affinity (pKd) and bioavailability.  The highest rankers in each family were chosen based on Lipinski’s Rule of 5 18 and were narrowed down on the basis of compliance with the Rule of 3 19, 20 .  The 82 highest rankers were then further reduced based on binding affinity (pKd).

TABLE 1: BEST BINDING CONFORMERS OF FARGLITAZAR AND ROSIGLITAZONE FOR THE ALTERNATE RECEPTORS.

Table 2 shows the in silico LBAs (pKd) of rosiglitazone and farglitazar bound to their cognate receptors compared with the LBAs (pKd) of their optimum conformers bound to the alternative receptor conformation.Similarly, the LBA (pKd) and binding energy (kcalmol-1) for the 21 highest affinity conformers of farglitazar that were generated within the rosiglitazone bound PPARγ can be seen in Figure 5 below.  The conformation with the greatest LBA (pKd=8.12) is shown in red.

The visual outputs of the mapped LBP’s can be seen in Figures 6 and 7. 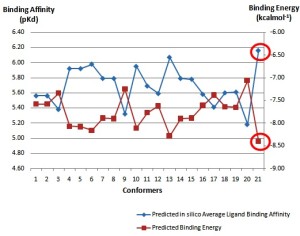 FIGURE 4: GRAPH OF BINDING AFFINITY (pkd)/BINDING ENERGY (kcalmol-1) FOR THE 21 CONFORMATIONS OF FARGLITAZAR FOR THE ALTERNATE PPARγ LBP (1FM6) 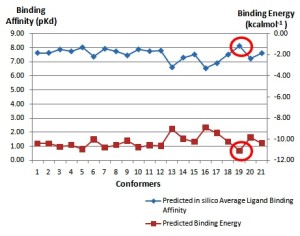 FIGURE 5: GRAPH OF BINDING AFFINITY (pKd)/Binding Energy (kcalmol-1) FOR THE 21 CONFORMATIONS OF ROSIGLITAZONE FOR THE ALTERNATE PPARγLBP (1FM9) 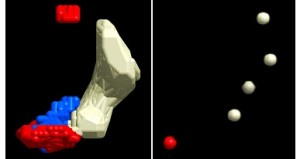 FIGURE 7: THE LBP OF THE FARGLITAZAR BOUND PPARΓ AS DESCRIBED IN PDB ID: 1FM6 (LEFT), AND ITS RESPECTIVE PHARMACOPHORE (RIGHT).  FARGLITAZAR HERE IS NOT NATIVE (ROSIGLITAZONE) TO THE DESCRIBED CONFORMATION OF THE PPARγ LBP.  HYDROGEN BOND DONOR GRIDS ARE COLORED IN BLUE, HYDROGEN BOND ACCEPTOR GRIDS IN RED AND HYDROPHOBIC GRIDS IN WHITE.  Images generated using Molsoft ICM Browser® 12.

Multiple families of compounds were generated for each of the seeds all containing potential lead compounds for the PPARγ receptor.  Twenty-seven highest rankers for seed A and 55 for seed B were identified and selected.  None of the generated molecules fell within the Rule of 3 criteria 19.  The Rule of 3 19 is a more stringent application of Lipinski’s Rule of 5 18 which is typically adhered to during lead molecule selection owing to the fact that it provides the leeway for structural alterations that are carried out during iterative optimization rounds that would consequently result in Rule of 5 18 compliant end product molecules.  Out of the selected molecules, 18 ligands were chosen as potential ligands for a novel drug design study – 2 resulting from seed A, and 16 from seed B (Tables 3 and 4). 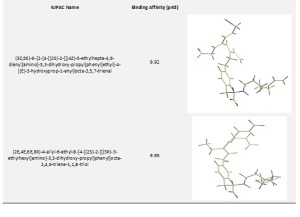 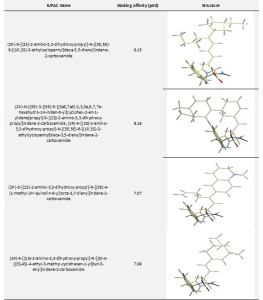 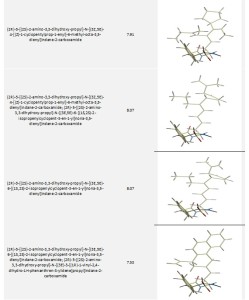 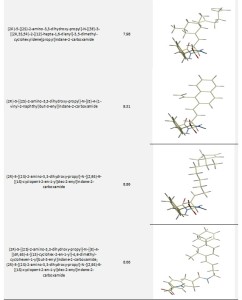 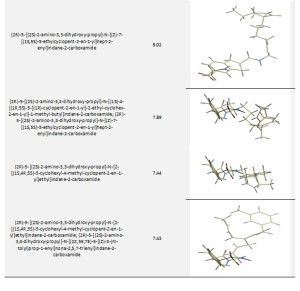 Binding affinities decreased when rosiglitazone and farglitazar were bound to the alternate receptor conformations, in comparison with the binding affinities measured for these two ligands with their cognate receptor conformations. An interesting observation is that the lower affinity of rosiglitazone and the higher affinity of farglitazar appear to be preserved in the cognate and alternative conformations of the PPARγ LBP in each case.

DISCUSSION: This study specifically aimed to demonstrate that the LBP of PPARγ adopted distinct conformations which were ligand driven – specifically one distinct conformation being adopted when PPARγ was bound to rosiglitazone (PDB ID; 1FM6) and another being adopted when PPARγ was bound to farglitazar (PDB ID; 1FM9).  In addition, it sought to propose viable alternatives to the currently available thiazolidinediones, owing to the fact that their flagship molecule rosiglitazone while being recognised for its superior hypoglycaemic and dyslipidaemic effects has had its use completely withdrawn or restricted 5 due to its unacceptable side effect profile 3, 4.

Mapping of the PPARγ LBP and generating proposed pharmacophoric structures using rosiglitazone bound to its cognate receptor conformation (1FM6) and the best affinity conformer of farglitazar bound with the rosiglitazone bound LBP (1FM6) was carried out in order to further support the notion that the PPARγ adopts distinct conformations which are ligand driven and dependant.

In fact, two different LBP maps were obtained and similarly, the predicted pharmacophores are not identical.  Given that the receptor conformation being assessed is the same (1FM6) and that the variable is only the ligand, we conclude that the ligands are accessing the LBP at different levels.

However, protein structure remains a function of 1° protein structure, and as a result some hydrophilic amino acids may be present in the hydrophobic core and vice versa.  It is these unstable amino acids that detract from the stability and increase the potential energy of the protein and create the LBP which makes ligand binding the final step of protein folding.

This explains how and why a protein will adopt different conformations around different ligands, as they access different unstable amino acids and create a ligand protein complex that has different energy and stability.

A new series of non-thiazolidinedione drugs have been identified in silico.  These novel molecules have a number of advantages which include high binding affinities (in silico), alternative binding modalities, and Lipinski’s Rule of 5 18 compliance.

In conclusion, this study may be considered a point of departure for further design of drug like molecules of demonstrable affinity for the PPARγ.