INTRODUCTION: Cancer treatment is done by radiation, chemotherapy, surgery and immuno-therapy. Microorganisms and their products are found to prevent cancer regression with a remarkable anti-cancer activity 1.

Bacterial proteins and peptides are new generation drugs which can act as effective anti-cancer drug 2.

The pretentious extract of Pseudomonas aeruginosa has shown promising anticancer activity. It contains a protein called Azurin. It has a molecular weight of 14 kDa. It is soluble in water. It is a type I copper-containing protein of cupredoxin family. In this work, it was attempted to isolate and purify azurin from Pseudomonas aeruginosa (MTCC 647). A biosynthetic method was developed to produce silver nano particles containing Azurin (Azurin-Ag-NPs).

Extraction of Protein: After fed batch cultivation, centrifugation of extract was done using cold centrifuge (REMI C- 24 PLUS) at 12000 rpm for 20 min. After centrifugation, cell pellets were collected.0.01M Potassium phosphate buffer (pH 7) was used to suspend the pellets 5. Using Ultrasonicator (Sonics Vibra cell) cells were sonicated. After sonication, again the suspension was centrifuged and stored at 4 °C 6.

Precipitation of Proteins using Ammonium Sulphate: Using ammonium sulphate, the crude extract was saturated by 80% 7. The solution was centrifuged at 25000 g for 20 minutes. The precipitate was suspended in 0.01 M Potassium phosphate buffer (pH 7).

Dialysis: Standard dialyses bag purchased from Spectrum lab. (Biotech CE Dialysis Tubing, 8 - 10 KD MWCO, 10 mm Flat-width, 10 meters/roll, 33 ft.). The precipitate was dialyzed in 0.01M potassium buffer (pH 7) at 4 °C for 24 hours 8. After dialysis, the precipitate is treated with DEAE. After DEAE treatment, the supernatant was saturated to 100% with ammonium sulphate and finally centrifuged at 10000 g for 15 min.

Chromatographic Separation using Sephadex G-75: Equilibrated Sephadex G-75 beads in 0.01M Tris HCl buffer (pH 7) packed in a 3 cm × 45 cm glass column. Each time one ml of the sample was passed through the column. Elution is done in phosphate buffer (pH 7). Flow rate was maintained at 1 ml / 5 min. Around Fifty-five fractions were collected.

Chromatographic Separation using CM Cellulose: Equilibrated CM cellulose beads were suspended in buffer 0.05 M Tris-HCl at pH 7. The beads were packed in a 5 cm × 15 cm glass column. Fraction (I) is collected from Sephadex G-75. It is added to the CM cellulose column beads. After 15 minutes, once the protein binds to the column firmly, elution is done using ammonium acetate buffer (pH 4).

SDS PAGE: SDS PAGE is carried out to determine the molecular weight of purified protein in the sample. Around 5 - 10 µl of protein sample was loaded at a voltage of about 70- 80 V and SDS PAGE chromatography was performed 9.

The culture flask ware incubated at 37 ºC in an orbital shaker at 150 rpm. After cultivation, the culture was collected and centrifuged at 12000 rpm for the synthesis of silver nano particle. 10 ml of supernatant collected and was mixed with 5 ml silver nitrate (AgNO3) solution(at a concentration of 0.1g/L) 11. The solutions were incubated at 30 °C for 48 to 72 h. To avoid phyto chemical reactions, all the solutions were kept in dark. After 6 h of incubation, a color change of solution from yellow to brown indicates the detection of silver nano particles Fig. 5. Further, the biosynthetically produced silver nano centrifuged at 5,000 rpm for 10 min. The biosynthetic Ag NP was collected for further characterization. From the reaction solution, 2 mL of sample was taken periodically and the bio reduction of silver nitrate was measured by using UV-Visible spectrophotometer at 200 - 800 nm at the resolution of 1 nm.

Biosynthesis of Silver Nano Particles Containing Azurin (Azurin - AgNPs): For the preparation of Azurin - Ag NP, variable quantities of protein sample were taken. Around 100 - 300 ng of protein samples were measured. They are incubated along with Ag NPs. In each trial 1 μg of Ag NP was taken and mixed with variable amounts of protein and incubated at 37 °C for 1 to 2 h. After incubation centrifugation was done at 5000 rpm for a period of 5 minutes. It removes the protein which is not bonded to the Ag NP. The Azurin-AgNPs s were collected for further characterization 12.

The surface morphology of the NPs was studied with scanning electron microscopy (SEM). The reduction of the pure AgNPs and formation of Azurin Ag-NPs were determined by measuring the absorbance measured at 280 nm using UV-Visible spectroscopy. It is used to find to find out the amount of protein immobilized on the surface of the NPs 13. FTIR spectra of nano particles were recorded with a Thermo Nicolet Nexus 670 spectrophotometer. KBr pellets of lyophilized and dried samples are analyzed in the frequency region from 400 cm-1 to 4000 cm-1 with Perkin–Elmer FTIR spectrometer 14.

In-vitro Protein Release from NPs: Two ml of Azurin Ag-NP was taken in 10 ml of phosphate buffer and incubated at 37 °C under magnetic stirring at 180 rpm. At equal time intervals a sample of 0.2 ml of the Azurin Ag-NP NP suspension was taken and centrifuged at 20 000 g. The supernatant was collected. The absorbance was measured at 280 nm by UV-Vis spectroscopy. The value gives the amount of released protein.

RESULTS AND DISCUSSION: Bacterial proteins can multiply selectively in tumors and inhibiting their growth. Due to their selectivity for tumor tissues, these bacteria proteins are chosen as most promising anti-cancer agents 15.

DEAE is a weak anion exchanger. The resin carries a positive charge that interacts favorably with negative charges. The positively charged proteins and flavo protein were removed during DEAE chromatography. After DEAE treatment; sample was loaded on Sephadex G-75 for further purification. The amount of protein in G-75 fractions was measured by UV-Spectrophotometer at 280 nm wavelength Fig. 1. Azurin binds to the beads and then eluted lately with elution buffer. The peak (I) was collected from Sephadex G-75. Then it is loaded into the CM cellulose column. A thick band in CM cellulose column confirms the presence of Azurin. It was eluted by ammonium acetate buffer pH 4.5 Fig. 2. Five fractions were collected and observed under UV spectrometer at 280 nm wavelengths for azurin concentration Table 1. At the end of CM cellulose, final concentration of Azurin was 4.6 mg/g dry bacteria.

SDS PAGE was performed by loading the protein sample from CM cellulose. It has shown a band corresponding to 14-kDa which confirm the presence of Azurin Fig. 3. The presence of the amide I band at 1640 cm-1 region in FTIR spectrum confirmed the α-helix secondary structure of azurin Fig. 4. Microbes convert metal ions into nano particles using enzymes of their own. Microbes reduce the Ag+ ions to form silver nano particles. They are spherical shaped and can impact mineral formation 17. The composite nano particles (Azurin- AgNP) were synthesized in two steps. At first Ag NP was synthesized. The NPs were spherical in shape and average particle size was 200 nm Fig. 6.  It was observed that purified Azurin protein was adsorbed on to the surface of Ag NP and loaded. The protein immobilized NPs were further analyzed by UV-Vis spectroscopy at 280 nm. Around 36 ng protein was bounded to 1 μg Ag NP Fig. 7. FTIR spectra of Azurin-Ag NPs were recorded Fig. 8. By this method, Azurin much more effectively enters the tumor cells than into the healthy 18, 19. Azurin induces apoptosis and works as promising anti-cancer agent. 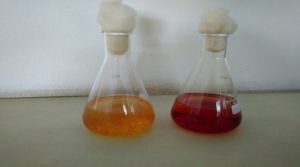 ACKNOWLEDGEMENT: The authors would like to thank UCT, Osmania University, Hyderabad for providing infrastructure to carry out the work