INTRODUCTION: Carotenoids are isoprenoid compounds, biosynthesized by end to end linkage of two C20 geranylgeranyl diphosphate molecules. The typical C40 carotenoids have cyclic β-ionone end groups that can be substituted by oxo, hydroxy and epoxy groups at different positions 1. Due to their anticancer and antioxidant properties, wider use of carotenoids as pharmaceuticals and nutraceuticals is expected. The synthesis of different carotenoids by several coloured yeast species has posed these microorganisms as a potential source of pigments 2, 3. The high productivity of carotenoids was revealed in the representatives of the following species: Rhodosporidium diobovatum, Rhodosporidium sphaerocarpum, Rhodotorula glutinis, Rhodotorula minuta and Sporobolomyces roseus 4.

Facing the growing economic significance of carotenoids, due to their use as food colorants, nutritional supplements, in cosmetics or in human therapy as antioxidants, much interest has been dedicated to new supplies of this class of pigments. In particular, the development of carotenoid-producing bioprocesses is regarded as a competitive solution, as it can provide important quantities of pigments such as torularhodin and β-carotene 5. Optimization of growth medium and cultural conditions is necessary in microbial fermentations to fully exploit the potential of selected microbial strain 6.

The integrated modeling and optimization approach response surface methodology is a powerful tool for analyzing the effect of multiple variables or factors on a given process rapidly and efficiently with a minimal number of experiments while keeping a high degree of statistical significance in the results7. The process employed for optimization of carotenoid production varies with each strain; hence there was a need to investigate the effects of various factors in carotenoid production by Rhodotorula mucilaginosa MTCC 11835.

The carotenoids were extracted in petroleum ether by Sedmark et al.8 method. The absorbance of the pigment extract was measured at 478 nm using UV-Vis Spectrophotometer (Elico, SL 159).  Data were expressed as total carotenoid production (TCP) mg l-1 of culture broth or total carotenoid content (TCC) mg g-1 dry biomass. Samples were analyzed in triplicates and the mean values and standard errors were calculated.

The effects of C-source, N- source, pH, Hydrogen peroxide and Tween 20 were studied using two level factorial designs. Plackett and Burman design was used to screen and evaluate the important medium components that influence the response. This method is based on the use of the polynomial model:  Y=bo + åbiXi + åbijXiXj + Ei

X- the independent variable or experimental factor level and

The experimental data were statistically analyzed to determine the significant difference (p≤0.05) in response under different conditions, using Shapiro-Wilk method of Analysis of variance (ANOVA) by Design expert Statease 8.0.7.1 software. The response surface graphs were also plotted using the same software. The regression equation based on Yates Algorithm was determined using Statease Design- Expert 8.0.7.1 and are as follows:

The data presented in Table 1 showed significantly different cell mass and carotenoid yield within the 16runs. It was observed that Rhodotorula mucilaginosa MTCC 11835 produced the highest TCC (total carotenoid content), TCP (total carotenoid production) and CDW (cell dry weight) 21.77mg g -1, 100.42mg l-1 and 4.6g l-1 respectively when grown in the medium containing glucose: glycerol (1:2), peptone, 0.5% Tween 20, 2.5mM H2O2 and pH 6.5. The results presented in Table I for cell mass and carotenoid production were subjected to regression analysis and the analysis of

variance (ANOVA). First order models were fitted to the data to evaluate the main effects of the five factors at the 95% confidence level. The statistical analysis of data using Two way ANOVA for TCC, TCP and CDW were found to be significant with the F-values of 4.21, 4.12 and 3.67 and the P-values 0.0444, 0.0356 and 0.0476 respectively at 5% significance. The Lack of fit for the three models was found to be insignificant (Table 2). The contour plots and three dimensional plots of the three responses showed diagonal ellipsoidal behavior, which confirmed the good fit of the models employed for all three responses (Fig.1).

The relative yield of total carotenoids from Rhodotorula mucilaginosa MTCC 11835, used in the present study is significantly higher than earlier studied strains of Rhodotorula. The factors carbon and nitrogen source and pH affected the total carotenoid content, total carotenoid production and cell biomass production in the present strain of Rhodotorula mucilaginosa. Though the carbon source affected the biomass and carotenoid yield significantly. The three dimension response surface plots with the two variables varying within the experimental range show convex shape for the carbon source. 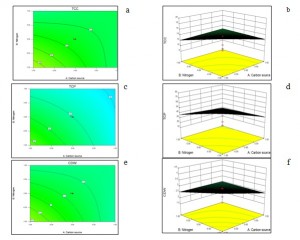