Ondansetron is a serotonin 5HT3 antagonist; anti emetic drug. Bitter taste of the ondansetron is a major problem in ensuring patient compliance. Resinates of ondansetron were prepared with Indion 234 and loading process was optimized. A 3² factorial design was used for formulation development of orodispersible tablet of these taste masked resinates. The amount of subliming agent (camphor) and superdisintegrants (sodium starch glycolate) were taken as formulation variables (factors) for optimizing disintegration time, drug release after 15 minutes and friability as dependent or response variables. A mathematical model was generated for each response parameter. The disintegration time was found to linearly increase with the increase in the amount of superdisintegrants. The percentage friability showed no definite relationship with either amount of subliming agent or superdisintegrants. The optimum formulations were chosen by grid search method and their predicted results were found to be in close agreement with experimental findings.

INTRODUCTION: Fast disintegrating /dissolving drug delivery system is a novel system which has advantages such as administration without water anytime and anywhere specially for geriatric and paediatric patients. It is also suitable for mentally ill, bedridden and patients who do not have easy access to water. The benefits in terms of patient compliance such as rapid onset of action, increased bioavailability and good stability make these tablets popular as a dosage form of choice in the current market. In addition, several business benefits such as expanded product lines, improved life cycle management, extended patent life and marketing advantages 2, 3. The basic approach is to bring about fast disintegration due to increased water uptake which causes explosion of tablet matrix 2.  Various superdisintegrants like crosscarmellose sodium, sodium starch glycolate and crosspovidone are used.

However; there are various other techniques are reported such as lyophillization 6 and vacuum drying 7, 8 these involve maximization of the pore structure of tablet matrix, thus leading to enhanced disintegration. But it yields tablets, which are fragile and hygroscopic. Sublimation, a useful technique that gives less fragile tablets by formation of a porous hydrophilic matrix which picks up disintegrating medium and disintegrates quickly 7. Various other patented technologies like Zydis, Oraquick, Durasolv, Flash dose; Wowtab etc are also been used to prepare fast disintegrating tablets 8. Systematic optimization technique can be successfully employed for the design and development of oral disintegrating tablets. These studies usually involve the use of response surface methodology (RSM), which has proven to be a useful tool in the development of solid dosage forms. Factorial design is one such optimization technique, where all the factors are studied in all possible combination. This technique is considered most efficient in estimating the influence of individual variables (main effects) and their interaction using minimum experimentation.

A Factorial Design for two factors at three levels each 3² is considered identical to a two factor composite design 10, 12. The main aim of the current study was to develop and optimize the fast disintegrating tablets of taste-masked ondansetron resinates prepared by wet granulation for oral delivery. A computer aided optimization process using a 3² factorial design was employed to investigate the effect of two independent variable (factors) i.e.; amount of subliming agent: camphor and amount of superdisintegrants; Sodium starch glycolate (SSG). The disintegration time, release after 15 minutes and percentage friability were taken as the response variables.

Method of Analysis 4: The drug was estimated spectrophotometrically at 272.6 nm using JASCO-V520 UV VIS spectrophotometer over concentration range of 2-12 µg/ml.

Determination of Drug Content of Resinate: - Resinate (100mg) was placed in 1M HCl and stirred at 100 rpm for one hour. The solution was filtered and analyzed for content of ondansetron. Stability of complexes was determined by placing weighed quantity of complex in deionized water for 24 hours and analyzed for drug content.

Taste Evaluation: 5, 6 Evaluation of taste was done in two parts;

Formulation of Orodispersible Tablets of Resinate: The tablets were formulated using resinate equivalent to 8 mg of drug, superdisintegrants, camphor, talc and lactose. Nine formulations were prepared as per table 1.

Evaluation of Tablet Properties: 10 tablets of each batch were evaluated for tablet weight, content uniformity and hardness. The hardness of the tablets was measured using a Monsanto hardness tester (Campbell, Mumbai, India). The wetting time of tablets war measured using a simple procedure. A piece of tissue paper folded twice was placed in a small Petri dish containing 6ml of distilled water. A tablet having amaranth powder on the upper surface is placed in folded tissue paper.

Time required to develop red color on the upper surface of tablet is recorded as wetting time 11. The friability of a sample of 10 tablets from each batch was measured using a Roche Friabilator (Tropical Equipment Pvt. Ltd., Mumbai, India). The weighed tablets were rotated at 25 rpm for 4 minutes. The tablets were then reweighed after removal of fines (using no. 85 mesh screen) and the % weight loss was calculated. The disintegration time was measured using a modified disintegration method (n=3). For this purpose, a petri dish 10cm (in diameter) was filled with 10ml of water. The tablet was carefully put in the center of the petri dish and the time for the tablet to completely disintegrate into fine packets was noted 10.

Data Analysis:  Various computations for the current optimization study using RSM were carried out, employing software Design Expert Version 7 12 and MS EXCEL. Statistical second order models including interaction and polynomial terms were generated for all the response variables. The general form of the model is represented as in equation given below.

Where Y is the dependent variable, βо is the arithmetic mean response of the nine runs, β1 to β8 are the coefficient computed from the observed experimental values of Y, and X1 and X2 are coded levels of independent variables. The interaction term X1X2 show how response changes when the two factors are simultaneously changed and the polynomial terms Xi² (i = 1, 2) are included to investigate nonlinearity. Subsequently, feasibility as well as grid search method was performed to locate the composition of optimum formulation. Also, three dimensional response surface graphs and contour plots were drawn in MS- Excel using the output files generated by the Design Expert Version 7 software 10.

Validation of Optimization Model: Nine optimum formulations were selected by intensive search, performed over the entire experimental domain, to validate the chosen experimental design and polynomial equations. The criterion for selection of formulation was primarily based on the highest possible values of disintegration time, drug release after 15 minutes and friability. The formulation corresponding to these formulations were prepared and evaluated for various responses.

RESULTS AND DISCUSSION: The % drug content in drug resin ratio of 1:1 is more and drug loading is also more with low concentration of resin hence ondansetron: indion-234 (1:1) selected for further study (Table 2). The threshold bitterness concentration was found to be 20 µg/ml as indicated by volunteers, such concentrations was not achieved even after 2 min in in vitro dissolution of drug equivalent resinate in simulated salivary buffer (table 3).

The orodispersible tablets of ondansetron are beneficial in case of vomiting and nausea. The fast disintegration was brought about by use of superdisintegrants and also due to high porosity tablets. Preliminary studies carried out prior to experimental design involved the use of various superdisintegrants and subliming agents and accordingly, a suitable range for each was selected as depicted in table 1.

Optimization results: Design of experiment (DOE) has been widely used in pharmaceutical field to study the effect of formulation variables and their interaction on response variable 14. In the current study, a 32 full factorial design was used. The mathematical relationship constructed for the studied response variables are expressed in equation (2) – (4). All the polynomial equations were found to be highly statistical significant (P< 0.001) as determined by ANOVA. 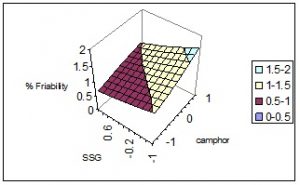 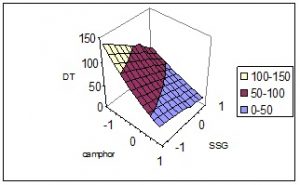 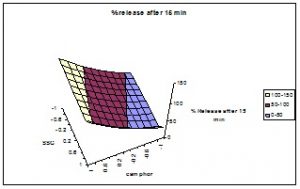 Table 4 gives records of the value of observed and predicted responses using factorial design along with percentage prediction error for these nine optimum formulations (Table 5). The prediction error for the response variable ranged between -2.983 to 2.011 with the mean ± SD of the percentage error -0.45±1.351%. Also high values of r² (ranging between 0.9936-0.9974) between the predicted and observed responses indicate excellent fit .thus low magnitude of error as well as the significant value of r² designate a high prognostic ability of RSM. 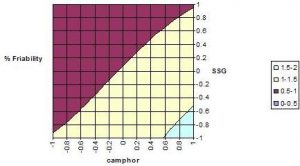 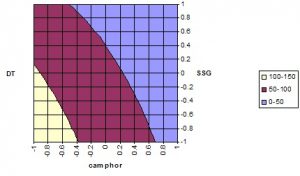 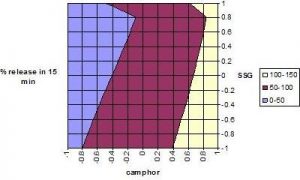 TABLE 4: PROPERTIES OF ONDANSETRON TABLETS PREPARED AS PER FACTORIAL DESIGN

Physical Evaluation of Optimum Formulations Prepared by Intensive Search: The tablet weights varied from 148.5 to 152.8 mg and hardness was kept between 4-5 kg/cm². The assay content of ondansetron varied between 98.6% and 99.5%, the wetting time ranged between 30- 160 seconds and water absorption ratio was in the range 18.14 to 35.71.