ABSTRACT: The aim of the research work was to develop and optimize fast dissolving tablets of Promethazine Thecolate by direct compression using effervescent technology. For the investigation, purpose a 32 full factorial design was used to know the joint influence of two formulation variables, Crospovidone and Citric acid. The formulated tablets were evaluated for its percent friability and their disintegration time. The results of multiple linear regression analysis revealed that for obtaining a rapidly disintegrating dosage form, tablets should be prepared using an optimum concentration of sodium starch glycolate and a crospovidone. A contour plot was also presented to graphically represent the effect of the independent variables on the disintegration time 30 s and percent friability 0.5 %. A checkpoint batch was also prepared to prove the validity of the evolved mathematical model. The optimized tablet should be prepared with an optimum amount of Sodium starch Glycolate (2.75 mg), and Crospovidone (2.72 mg) which disintegrated in the 30 seconds, with friability of 0.5% and of drug release within   5 min. The optimized approach aided both the formulation of fast dissolving tablets and the understanding of the effect of formulation processing variables on the development of formulation

INTRODUCTION: The oral route of administration still continues to be the most preferred route due to its manifold advantages including ease of ingestion, pain avoidance, versatility and most importantly patient compliance. The most popular solid dosage forms are tablet and capsule. One drawback of these dosage forms however is the difficulty to swallow. Dysphasia or difficulty in swallowing is seen nearly 35% in the general population.

This disorder is also associated with number of medical conditions including stroke, Parkinson’s disease, AIDS, head and neck radiation therapy and other neurological disorders including cerebral palsy. 1-3

Many elderly persons will have difficulties in taking conventional solid dosage form (tablets and capsules) because of their hand tremors and dysphasia. Swallowing problems are also common in young individuals because of their under developed muscular system. Other groups, who may experience problems in swallowing solid dosage form, are the mentally ill, the developmentally disabled, uncooperative patients and reduced liquid intake plans or nausea. In some cases such as motion sickness, sudden episode of allergic attack or coughing and an unavailability of water, swallowing of tablets may become difficult.4

To fulfill these medical needs, the pharmaceutical technologist have devoted considerable effort to develop a novel type of dosage form for oral administration, the Fast Dissolving Tablet (FDT), tablet that disintegrates and dissolves rapidly in saliva without need of water. The fast dissolving tablets usually dissolve in oral cavity within 15 to 60 s. The faster the drug goes into solution, the quicker the absorption and onset of clinical effects. The development of fast dissolving tablets also provides line extension in the market place.1-4

Pre-compression Characterization: The quality of tablet, once formulated by rule, is generally dictated by the quality of physicochemical properties of blends. There are many formulations and process variables involved in mixing steps and all these can affect the characteristics of blend produced. The characterization parameters for evaluating the flow property of mixed blends includes bulk density, tapped density, hausner’s ratio, compressibility index and angle of repose 5.

Tapped density: The measuring cylinder containing a known mass of blend was tapped 100 times using density apparatus. The constant minimum volume (Vt) occupied in the cylinder after tappings and the weight (M) of the blend was measured 6-9. The tapped density (ρt) was calculated using the formula.

The simplest way for measurement of flow of the powder is its compressibility, an indication of the ease with which a material can be induced to flow 6-9. It is expressed as compressibility index (I) which can be calculated as follows.

Hausner’s Ratio: Hausner’s ratio (HR) is an indirect index of ease of powder flow. It is calculated by the following formula.

where, ρt is tapped density and ρb is bulk density.

Angle of Repose: Angle of Repose was determined using funnel method. The blend was poured through a funnel that can be raised vertically until a specified cone height (h) was obtained. Radius of the heap (r) was measured and angle of repose (θ) was calculated using the formula. 10-12

where, θ is angle of repose; h is height of cone; r is radius of cone.

The general appearance of a tablet, its visual identification and over all ‘elegance’ is essential for consumer acceptance. This includes tablet’s size, shape, color, presence or absence of an odor, taste, surface texture, physical flaws etc. 13.

Ten tablets were taken and their thickness was recorded using micrometer (Mityato, Japan).

The weight variation test would be satisfactory method of determining the drug content uniformity. As per USP 14, twenty tablets were taken and weighted individually, calculating the average weight, and comparing the individual tablet weights to the average. The average weight of one tablet was calculated.

TABLE 5: WEIGHT VARIATION LIMITS FOR TABLETS AS PER USP

Hardness of tablet is defined as the force applied across the diameter of the tablet in order to break the tablet. The resistance of the tablet to chipping, abrasion or breakage under condition of storage transformation and handling before usage depends on its hardness. Hardness of the tablet of each formulation was determined using Pfizer Hardness Tester 13.

Friability of the tablets was determined using Roche friabilator. This device subjects the tablets to the combined effect of abrasions and shock in a plastic chamber revolving at 25 rpm and dropping the tablets at a height of 6 inch in each revolution. Preweighed sample of tablets was placed in the friabilator and were subjected to 100 revolutions. Tablets were dedusted using a soft muslin cloth and reweighed. The friability (F %) is determined by the formula

Wetting time of the tablets was measured using a piece of tissue paper (12 cm X 10.75 cm) folded twice, placed in a small petridish (ID = 6.5 cm) containing 6 ml of Sorenson’s buffer (pH 6.8). A tablet was put on the paper, and the time for the complete wetting was measured 15-18. 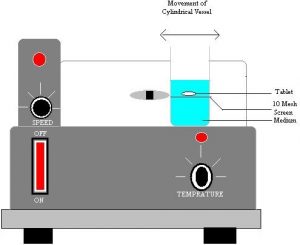 Full factorial design: To know the actual amount of superdisintegrant and effervescent agent for the desirable property of fast dissolving tablets a 32 randomized full factorial design was used. In this design 2 factors are evaluated, each at 3 levels and experimental trials are performed at all 9 possible combinations 23, 24. The amount of Sodium bicarbonate + Citric Acid (X1) and the amount of crospovidone (X2) was selected as independent variables. The disintegration time and percentage friability were selected as dependent variables. A statistical model incorporating interactive and polynomial terms was used to evaluate the responses.

Where, Y is the dependent variable, b0 is the arithmetic mean response of the 9 runs, and b1 is the estimated coefficient for the factor X1. The main effects (X1 and X2) represent the average result of changing 1 factor at a time from its low to high value. The interaction terms (X1X2) show how the response changes when 2 factors are simultaneously changed. The polynomial terms (X1X1 and X2X2) are included to investigate nonlinearity.

Preparation of fast dissolving tablets factorial design batches: The raw materials were passed through a no. 100 screen prior to mixing. Promethazine theolate, crospovidone, sodium bi carbonate, citric acid, avicel and lactose were mixed using a glass mortar and pestle. The blends were lubricated with 2% w/w talc and 2% w/w magnesium stearate. The blends ready for compression were converted into tablets using a single-punch tablet machine. The composition of the factorial design batches is shown in Table 7 respectively. 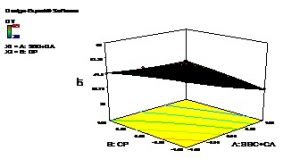 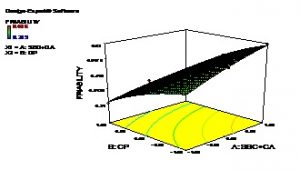 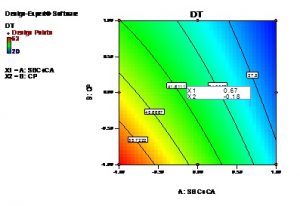 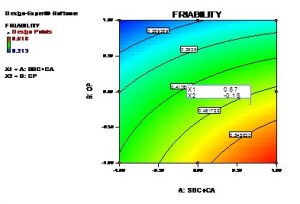 Optimization of the fast dissolving tablet:

The fitted equation was generated relating the responses disintegration time and percentage friability to the transformed factor. The polynomial equations can be used to draw conclusions after considering the magnitude of coefficient and the mathematical sign it carries (ie, positive or negative).

After application of full factorial design and with help of polynomial terms the optimized tablet was produced which have targeted to the disintegration time 30 s and 0.5% percent friability. The optimization was done with the help of software Design Expert 7.1.6. The optimized amount of the sodium bicarbonate + citric acid and crospovidone was incorporated in the tablet formulation (OPT) which was also used as the check point of the regression analysis model. The response surface prediction plots were formulated with the help of the software 25, 26.

TABLE 9: CALCULATIONS FOR TESTING THE MODEL IN PORTIONS 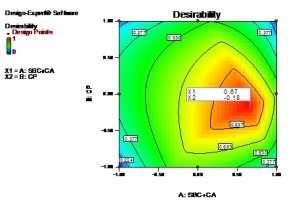 Development of Optimized of Fast Dissolving Tablet: The optimized fast dissolving tablet was prepared with the best amount of suggested by the software. The prepared tablets were evaluated for its physiochemical properties.

Content uniformity: Ten randomly selected tablets were weighed and average weight was calculated, the tablets were powdered in a glass mortar pestle. The weight equivalent to 100 mg Promethazine thecolate, was weighed. The weighed amount was dissolved in 100 ml of Sorenson’s buffer (pH 6.8) and the solution was filtered. An aliquot of 1.0 ml from this solution was diluted appropriately with Sorenson’s buffer (pH 6.8) in separate volumetric flask. The content in each formulation was determined spectrophotometrically at 250 nm.

In vitro dissolution study: In vitro dissolution study for optimized tablet and marketed tablet were carried out using USP paddle method at 50 rpm in 900 ml of Sorenson’s buffer (pH 6.8) as dissolution media, maintained at 37±0.5o. 5 ml of aliquot was withdrawn at the specified time intervals (1 minute), filtered through whatmann filter paper and assayed spectrophotometrically at 250 nm. An equal volume of fresh medium, prewarmed at 37o, was replaced into the dissolution media after each sampling to maintain the constant volume throughout the study 27, 28.

The various kinetic treatments were applied to the dissolution data. The in vitro dissolution data obtained were subjected to a zero order and first order kinetics to understand the release profile and release mechanism. When a graph of the cumulative percentage drug released from the tablet against time was plotted, zero order release was observed and the plot obtained was found to be linear, indicating that the release rate is independent of concentration. The rate of release of the drug can be described mathematically as follows:

Where, Cs = concentration of the drug present in the matrix,

t = time and Cs is a constant.

The amount of drug released (X) can be described as, dx / dt = k. Integration of the equation yields

A plot of x versus t results in a straight line with the slope = k. The value of k indicated the amount of the drug released per unit of time and the intercept of the line at time zero is equal to the constant in the equation25, 26. 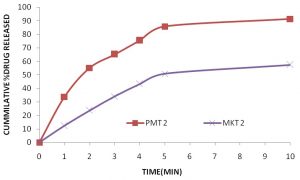 TABLE 14: FIT OF VARIOUS KINETIC MODELS FOR TABLETS OF PMT 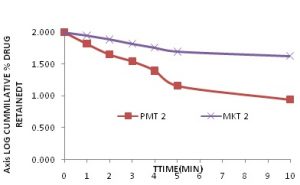 RESULTS AND DISCUSSION: The Fast dissolving tablets of Promethazine Thecolate were successfully prepared by direct compression technique; five formulations with varying quantity of Sodium bicarbonate + Citric acid and Crospovidone were prepared. Among all formulations F7 showed the best results with DT 24 Seconds and Friability 0.491%, on the basis of results this batch was further selected for optimization. The pre-compression characterization of mixed blends was done for determination of mass volume relationship and flow properties. The results of bulk density, tapped density, Hausner’s ratio, compressibility index and angle of repose indicated good compressibility and flow characteristics of the formulated mixed blends. Further using 32 factorial design totals nine formulations were prepared by effervescent technique. Using polynomial equation the effect of independent variables X1 (SBC+CA) and X2 (CP) on dependent variables Y1 (DT) and Y2 (friability) was checked. The desirability of the models was found very near to one, so, these models can be used to navigate the design space. The amount of independent variables was calculated for DT 30 s, friability 0.5% and 90% drug release after 5 min. The optimized amount of independent variables was obtained easily by software and these amounts were incorporated in the check point batches. The optimized tablets were prepared and evaluated for physiochemical properties. The results indicated that the formulation satisfied all the criteria of the fast dissolving tablet.

CONFLICT OF INTEREST: Authors have no conflict of interest. The work has been carried by ourselves.