ABSTRACT: The goal of the present study was to investigate the feasibility of using non-ionic surfactant vesicles as carriers for the sustained delivery of water soluble anti-cancer drug Capecitabine, used in the treatment of colorectal cancer. The niosomal formulations were prepared using various non-ionic surfactants (span 40, span 60, tween 40 and tween 60) in the presence of cholesterol, by thin film hydration technique. The effect of process related variables like hydration time, sonication time, rotation speed of evaporation flask on the entrapment efficiency and in vitro drug release were evaluated. Formulation of Capecitabine niosomes was optimized by altering the proportions of Tween, Span and cholesterol. The formation, morphology and size of the drug loaded niosomes were determined by optical microscopy, transmission electron microscopy and particle size analyzer respectively. Results showed a substantial change in the release rate and in the % Entrapment of Capecitabine from niosomal formulations upon varying the type of surfactant and cholesterol content. In-vitro drug release results confirmed that the niosomal formulations have exhibited a higher retention of Capecitabine inside the vesicles such that the in-vitro release was slower compared to the drug solution. Highest drug entrapment (59.1±0.72%) and sustained release (67.95±0.65%) was obtained with vesicles formed using tween 60 and cholesterol in 4:1 ratio. The optimized niosomal formulation was subjected to stability studies at 4±2°C and 27±2°C for a period of three months.

INTRODUCTION: Capecitabine is an anticancer drug which is widely used in the treatment of colorectal cancer and breast cancer.

Colorectal cancer, commonly known as bowel cancer, is a cancer from uncontrolled cell growth in the colon, rectum or appendix. According to the American Cancer Society, colorectal cancer is one of the leading causes of cancer related deaths in the United States and is the fourth most common cancer worldwide.1 Fluoropyrimidines like Capecitabine remain the cornerstone of chemotherapy regimens in the treatment of metastatic colorectal cancer (mCRC), even with the availability of newer cytotoxic and targeted biologic agents 2.

The half-life of Capecitabine is 45 minutes which results in frequent administration of the dosage form and increased side effects. To overcome these problems and to improve the patient compliance, a prolonged release and a site specific formulation is desirable. Niosomes are one of the drug carriers made from inexpensive and easily available food additives of non-ionic surfactants. These are bilayered structures, which can entrap both hydrophilic and lipophilic drugs. 3 Niosomes act as a controlled release formulation, which establishes and maintains the drug concentration at the target site for longer intervals of time.

MATERIALS AND METHODS: Capecitabine was obtained as a gift sample from Burgeon Pharmaceuticals. Span 40, Span 60, Tween 40 and Tween 60 were purchased from SD fine chemicals, Mumbai. Cholesterol was procured from Himedia, Mumbai. Chloroform was bought from Rankem laboratories. All other chemicals used were of Analytical grade.

Each study was performed in triplicate. The in vitro release studies were also carried out for the pure drug by the same method.

Wherever Qt is the percentage of drug released at time t, Q0 is the initial amount of drug present in the formulation and K0, K1 and Kh are the constants of the equations. The following plots are made; Qt vs. t (Zero order kinetic model), ln (Q0-Qt) vs. t (first order kinetic model) and Qt vs. t½ (Higuchi kinetic) respectively from equation 2, equation 3 and equation 4. Further to confirm the mechanism of drug release, data is fitted with korsmeyer-peppas equation,

Where Mt/Mα is the fraction of the drug release at time t, Kp is the rate constant and “n” is the release exponent. The value of “n” is calculated from the korsmeyer-peppas equation. It is used to interpret different mechanisms of drug release. Hixson Crowell cube root kinetics (equation 5) used to understand the progressive dissolution of matrix as a function of time. 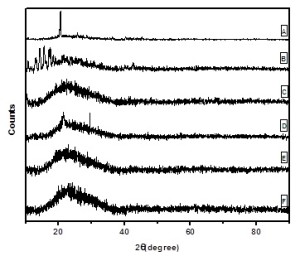 Hence, the FTIR spectra of Capecitabine, cholesterol, non ionic surfactants and the niosomal formulation showed corresponding peaks which indicate that there is no interaction between the drug and the excipient. 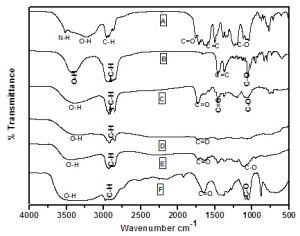 Preformulation Studies: Pre-formulation studies were carried out with non ionic surfactant Tween 60 at 25, 50, 75, 100 and 125 µM with a fixed amount of Capecitabine (10 mg) and 25µM cholesterol. At concentrations 25, 50 and 75 µM, vesicles were not formed properly and they were not stable. At concentrations 100 and 125 µM of Tween 60, Spherical vesicles were formed. At 125 µM concentration, the vesicles were seen aggregated. So the formation of Niosomes using 100 µM of non-ionic surfactant was found to be superior to other molar ratios. The process related variables such as Sonication time, hydration time and speed of rotation of flask evaporator were investigated.

A)    Effect of Sonication Time: Formulations were sonicated three times for 15 min (for each time) with an interval of 5 min. Spherical niosomal vesicles were not observed after 5 minutes of Sonication. The entrapment efficiency decreased when the sonication time was increased above 3 minutes. Exposure to ultrasound for 5 minutes and above damaged the vesicles. Three minutes of sonication resulted in uniform unilamellar vesicles (Table 1).

B)    Effect of Hydration Time: The niosomal formulations were hydrated with 10 ml of phosphate buffer saline (pH 7.4), for 30, 45, 60, 75 and 90 minutes. The entrapment efficiency of the formulations is shown in Table 2. The results indicate that increase in the hydration time of the film from 30 to 45 minutes lead to higher entrapment efficiency but further increase in the hydration time did not produce any significant impact on it.

C)    Effect of Rotational Speed of Rotary flask evaporator: The thickness and uniformity of the film depended on the rotational speed of the flask. A speed of 100 rpm produced a uniformly thin lipid film, which upon hydration produced spherical vesicles. Lower rpm (50 rpm) resulted in non-uniform films and higher rpm (150 rpm) produced thick films which on hydration formed aggregates of vesicles.

D)    Effect of Osmotic Shock: The niosomal formulations were treated with hypotonic (0.5% NaCl), hypertonic (1.6% NaCl) and isotonic saline (0.9% NaCl) solutions. The effect of osmotic shock was shown in Figure 3. Increase in the vesicle size was observed in formulation incubated with hypotonic solution. In hypertonic solution, the formulation shrunk uniformly. Formulations incubated with saline showed a slight increase in vesicle size. This demonstrates that Capecitabine niosomes could be diluted with normal saline for oral use. 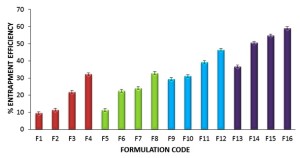 The order of non ionic surfactants that resulted in better entrapment efficiency is as follows,

The cumulative % drug release at 24 hours for the tween 60 series is 85.80% for formulation F13 whereas it was 76.37 %, 71.29 % and 67.95 % for formulations F14, F15 and F16, respectively. Significant changes in release were observed upon changing the type of surfactant used in the bilayer of Capecitabine niosomes. The experimental studies showed that the rate of drug release is inversely proportional to the entrapment efficiency of the drug.

Effect of Surfactants on the Release Rate from Formulation: From the release studies, the formulation F16 shows slower and prolonged drug release than other formulations. This may be due to higher entrapment efficiency of the formulation.

Among the formulations prepared using span 40 (F1 to F4), F1 shows maximum drug release in 24 hours and the increasing order of percentage drug release was found to be,

Among the formulations prepared using span 60 (F5 to F8), F5 shows maximum drug release in 24 hours and the increasing order of percentage drug release was found to be,

Among the formulations prepared using Tween 40 (F9 to F12), F9 shows maximum drug release in 24 hours and the increasing order of percentage drug release was found to be,

Among the formulations prepared using Tween 60 (F13 to F16), F13 shows maximum drug release in 24 hours and the increasing order of percentage drug release was found to be,

From the above reports, it is concluded that increasing the surfactant concentration decreased the drug release.

Kinetics of Drug Release: The in-vitro release data was applied to various kinetic models to predict the mechanism of drug release of formulations F1 to F16. The release constant was calculated from the slope of appropriate plots, and the regression coefficient (r2) was determined. From the results shown in Table 4.

All the formulations followed first-order kinetics and their r2 value lay between 0.917 and 0.954, indicating the release to be dose dependent.

1)      The drug release was proportional to the square root of time indicating that     Capecitabine release from niosomes was diffusion controlled.

Optical Microscopy and Transmission Electron Microscopy: Optical microscopy and TEM images of optimized niosomal formulation (F16) were recorded. The particles are almost spherical and homogenous. The niosomes are in Nanometric size range of about 100 to 300 nm. The results showed that the Capecitabine loaded niosomes have a spherical shape with smooth surface and discrete without any aggregation or agglomeration (Figure 5 and 6). 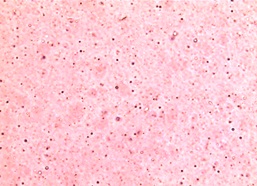 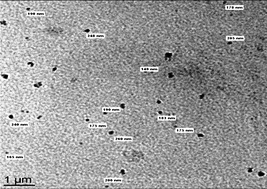 Particle Size Analysis: The particle size determination of the niosomal formulations was carried out using laser diffraction (Malvern Particle Size Analyzer) and the mean of vesicular diameter was found to be 131.9nm as shown in the Figure 7. 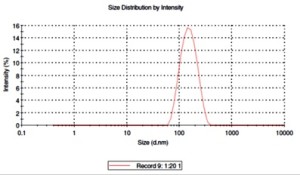 Stability Studies of Capecitabine Niosomes: Stability studies of the selected formulations (F16) were carried out by storing at 4oC (refrigeration temperature) and 25oC + 2oC for a period of three months as per ICH (International Conference on Harmonization) guidelines. 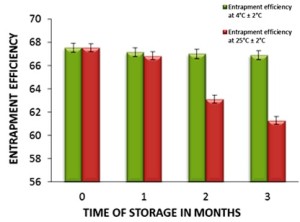 The entrapment efficiency of the drug in the niosomal dispersion was estimated immediately after the preparation and after every month for three months (Figure 8). The drug leakage from the vesicles was least at 40C. This may be attributed to phase transition of surfactant and lipid causing leakage of vesicles at higher temperatures during storage. Hence the Niosomes can be stored at 40C.

CONCLUSION: It is concluded that, the thin film hydration technique is a useful method for the successful incorporation of hydrophilic drugs. The formulations were characterized with respect to size, entrapment efficiency, in- vitro drug release and stability under specific conditions. It has been concluded that the Niosomes prepared with Tween 60 (F16) has more entrapment efficiency and releases drug slowly (67.95±0.65) in a sustained manner as compared to other formulations. The drug release pattern from Capecitabine loaded Niosomes follows Higuchi’s model and first order release.

The prolonged release of the drug from the niosomes suggests that the frequency of administration may be reduced. Further, as the particles are in nanometeric size range, the bioavailability may be increased and effective targeting may be achieved. Future investigations in animals, human volunteers, pharmacological and toxicological investigations in animals and human volunteers may help to exploit the niosomes as prosperous drug carriers for targeting drugs more efficiently.  Hence, we can conclude that niosomes provide controlled release of drug and these systems are used as drug carriers for the delivery of cytotoxic drugs with fewer side effects.

ACKNOWLEDGEMENT: We gratefully acknowledge support for this work from SAIF, IIT Madras for FTIR Characterization. The work has been done in IIT Madras. One of the authors is thankful to Madras medical college of pharmacy support of this work.