ABSTRACT: Objective: There is rapidly growing interest in the development of nanoparticles drug delivery mainly for anticancer drugs as it promises to solve problems to several related to anticancer drugs. The aim of present work was to formulate erlotinib loaded chitosan nanoparticles using probe sonication technique. The objective of the study was to investigate the effect of surface stabilizers and sonication time on the entrapment efficiency of erlotinib loaded chitosan nanoparticles. Methods: In this work, three parameters were evaluated i.e. different surface stabilizers, amount of surface stabilizers (50 - 150 mg) and sonication time (6 - 15 min). The formulated chitosan nanoparticles were characterized by particle size, polydispersity index, percentage yield, loading capacity, entrapment efficiency, differential scanning calorimetry and fourier transform infrared spectroscopy. Results: It was found that batch PNP-11 (formulated using PEG 600 having amount of 50 mg at sonication time ~ 15 min) has a maximum loading capacity 76.07±0.14 (w/w), entrapment efficiency 73.60 ± 0.17% (w/w) and smallest particle size of 59.80 nm out of all the thirteen formulations (PNP-1 to PNP-13). The DSC analysis of PNP-11 suggested a molecular dispersion of drug inside the system. Infrared analysis of PNP-11 showed no interaction between drug and polymer during the formulation process. Conclusion: The nano-effects due to biocompatible cross-linked chitosan and sonication time are the critical parameters for the development of erlotinib loaded nanoparticles.

INTRODUCTION: In the current period, extensive consideration has been focused on the advance of novel drug delivery systems (NDDS). The motives behind the development of NDDS contain drug delivery to the site of action without any significant immunogenicity reactions, biological inactivation or the potential side effect to the critical tissues for example kidney, liver, lungs, or bone marrow etc.

The core intention to advance the NDDS is to improve the therapeutic efficacy and safety of the existing drugs by reducing the frequency, amount of dosing and altering the bio-distribution pattern of the drugs 1.

Nanoparticles are novel drug delivery system that consists of particles of nano- ranges for drug and gene delivery in specific regions of the body. The drug is entrapped, encapsulated, dissolved, or attached to a nanoparticles matrix. The main areas in designing nanoparticles as delivery system are to control particles size, surface properties and release of pharmacologically active agents in order to achieve the site-specific action of the drug at the therapeutically optimal rate and dose regimen 2.

Chitosan has an admirable potential in designing nanoparticulate drug delivery and it has ability to control the release of drug and is biocompatible with living tissue. Chitosan is a natural carbohydrate polymer prepared by the partial N-deacetylation of chitin. Chitosan is soluble in dilute acidic solution and has diverse applications in controlled drug delivery systems. Chitosan based nanoparticles have benefits, chiefly for the design of novel nanoparticulate drug delivery systems, due to their desirable properties such as hydrophilic character, biodegradability, bio- and muco-adhesivity and biocompatibility that facilitate the administration of poorly absorbable drugs across various epithelial barriers, such as intestinal mucosa, corneal and nasal 3, 4.

Lung cancer is the major reason of cancer-based deaths globally and it is basically the abnormal and uncontrolled cell growth in the lung. Lung cancer has been proved to be accountable for greater number of deaths than any other tumor in both males and females. According to cancer facts and figures 2015, the estimated number of new cases of cancer in US was 221,200 and estimated deaths were 158,040 5.

Although cancer-related symptoms have been controlled by platinum-based chemotherapy and survival has also been improved, still the development of the new agents is the urgent need of the hour. The availability of targeted therapies has become a very useful resource in treating advanced Non-Small Cell Lung Cancer (NSCLC). The major part in the growth and progression of NSCLC and pancreatic cancer has been found to be played by epidermal growth factor receptor (EGFR) 6.

Erlotinib is a quinazolinamine with the chemical name N-(3-ethynylphenyl) - 6, 7 - bis (2-methoxy ethoxy)-4-quinazolinamine. It comes under class II compounds of the biopharmaceutics classification systems (BCS), a scientific framework to classify the drug substances on the basis of their solubility in aqueous medium and on their intestinal permeability. Erlotinib exist as the salt of hydrochloric acid in the market and accepted for the employ in combination with the gemcitabine chemotherapy for the locally advanced treatment, inoperable, or metastatic pancreatic cancer 5, 6.

The aim of present work is to formulate erlotinib loaded chitosan nanoparticles using probe sonication technique. The objective behind the study was to examine the consequence of formulation and process parameters i.e. different surface stabilizers, amount of surface stabilizer and sonication time on the particle size, polydispersity index, percentage yield, loading capacity and entrapment efficiency on erlotinib loaded chitosan nanoparticles.

Materials: Erlotinib was obtained as a gift sample from Hetero Labs Limited, India. Chitosan (95% deacetylated) having a molecular weight of 40-80 kDa was purchased from Fluka Chemika, Switzerland. Sodium tripolyphosphate (NaTPP) and Glacial acetic acid were purchased from Central Drug House, New Delhi. PEG 600 and Tween 80 were purchased from Loba Chemie Pvt. Ltd., Mumbai, India. All other chemicals were of HPLC grade and used as provided by the manufacturer.

Preparation of Erlotinib Loaded Chitosan Nanoparticles: In this study, the nanoparticles (NPs) were prepared using ionic gelation method. In this method, chitosan (0.1% w/v) was dissolved in 0.1% v/v glacial acetic acid. The solution of sodium tripolyphosphate (NaTPP) (0.2% w/v) was prepared in double distilled water. The drug solution was prepared separately by dissolving erlotinib (150 mg) in methanol and dimethyl sulphoxide (1:1) and the surface stabilizers - PEG 600 and tween 80 were used at different amount i.e. 50, 75, 100 and 150 mg. The chitosan and drug solution were mixed together using magnetic stirrer at speed of 700-1000 rpm for 4 h approximately. Then, NaTPP (100 ml) was added dropwise at 1 drop/sec while magnetic stirring. Then, this solution was sonicated using probe sonicator at different time i.e. 6, 8, 10 and 15 min; the obtained chitosan nanoparticle suspension was centrifuged at 26000 rpm for 30 min. The supernatant was removed and chitosan nanoparticles were lyophilized using freeze-drying. The erlotinib loaded polymeric nanoparticles were formulated to study the effect of different surface stabilizers, amount of surface stabilizer and sonication time on the entrapment efficiency, loading capacity, percentage yield and particle size of erlotinib. In the present study, three factors were evaluated. The factors selected were X1 = Surface Stabilizers; X2 = Amount of Surface Stabilizer and X3 = Sonication Time. The formulation of erlotinib loaded polymeric nanoparticles were prepared according to Table 1.

Particle Size Analysis: For particle size analysis, the dilution of sample was analyzed using Zetasizer Instrument (Malvern, UK) equipped with the Hydro dispersing unit by dissolving 2 mg of sample in 5 ml of distilled water. The sample dilution was filled in a polystyrene cuvette in hydro dispensing unit and scan was carried out at 64 runs per sample. After the completion of scan the average diameter/ scan of all the 64 runs were taken out and recorded as Z-average.

The HPLC analyses were carried out using a system (Agilent technologies 1200 series, Germany) that consisted a stainless-steel column C18 10 cm × 4.6 mm packed with octadecylsilane bonded to porous silica (3µm). The binary mobile phase consisted of a mixture of methanol and 0.1 % orthophosphoric acid in the ratio of 70:30 v/v. The effluents were degassed before running at a flow rate of 1 mL min-1. The column temperature was ambient at 45° C. The 20 µL volume of sample was injected per run and effluents were detected using UV detector at wavelength 247 nm.  The entrapment efficiency, drug loading and percentage yield was calculated according to the following equations 7: 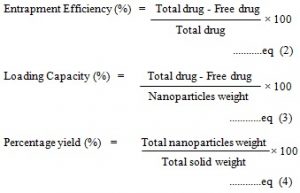 Differential Scanning Calorimetry (DSC) Analysis:  DSC measurements were carried out on DSC Q10 (Waters Corporation, USA). The instrument was calibrated using Indium as standard. Samples were placed in sealed aluminium pans and heated from 30 ºC to 300 ºC at a rate of 10 ºC/min under nitrogen atmosphere (60 ml/min), with empty pan as reference.

Fourier Transform Infrared (FTIR) spectro-photometry: FT-IR is a method of obtaining infrared spectra by first collecting an interferogram of a sample signal using an interferometer, and then performing a fourier transform on the interferogram to obtain the spectrum. Fourier transform IR spectra were recorded on FT-IR Alpha, Bruker, Germany. The spectra were recorded over the range of 500 - 3500 cm-1.

RESULTS AND DISCUSSION: TPP is a non-toxic and multivalent anion that can form cross-linkage involving ionic interactions between the positively charged amino group of chitosan and multivalent, negatively charged TPP molecules. With the dropwise addition of TPP, the nanoencapsulation was processed with electrostatic interaction. Meanwhile, with the incorporation of ion TPP to chitosan solution, the opalescence indicated the formation of nanoparticles with a size of nano-range. During the ionotropic gelation process, most of the available chitosan was formed into nanoparticles 4.

In the experimental work, total 13 formulations of nanoparticles were formulated for optimizing three parameters - Surface Stabilizers (X1), Amount of Surface Stabilizer (X2) and Sonication Time (X3). In this, the entrapment efficiency, loading capacity, particle size, percentage yield and polydispersity index were carried out for all the formulations and are shown in Table 2.

Differential Scanning Calorimetry Analysis: The drug was confirmed by differential scanning calorimetry (DCS) analysis and there was a sharp peak at 234.87 ºC almost corresponding to its melting point (232 ºC) with percentage purity 99.11% Fig. 2. The disappearance of endothermic peak of PNP-11 Fig. 3 showed that drug may have been dispersed or dissolved in the polymer matrix during formation of nanoparticles. The total incorporation of the drug into the nanoparticles suggested a molecular dispersion of drug inside the system. The nano-entrapment process produced a marked decrease in crystallinity of erlotinib and allows a nearly amorphous state 8, 9. The DSC thermogram of erlotinib, chitosan and optimized batch PNP-11 are shown as overlay in Fig. 4. 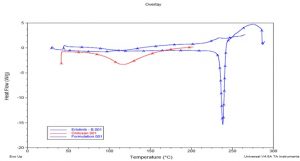 Fourier Transform Infrared (FTIR) Spectro-photometry: The spectra were recorded for pure drug - Erlotinib and PNP-11 as shown in Fig. 5 and 6, respectively, and the comparison of peaks of pure drug with PNP-11 are tabulated in Table 3. There was no significant difference in the FTIR spectra of Erlotinib and drug loaded PNP-11. No significant shifting of functional peaks, no overlapping of characteristic peaks and also no appearance of new peaks were observed upon comparison of obtained spectra with reference spectra. The results suggested drug stability during the entrapment process. The FTIR data suggested that molecular interactions that could alter the chemical structure of the drug did not occur. Therefore, no chemical interaction between functional group of drug and polymer exist 4.

TABLE 3: COMPARISON OF PEAKS OF PURE DRUG AND PNP-11