D. Suares and B. Prabhakar *

ROS has been approved by US-FDA in 2003 for the treatment of dyslipidemia 1. It has also been explored for the treatment of osteoporosis, benign prostatic hyperplasia and Alzheimer’s disease 2. Lipid nanocarriers are basically colloidal carriers having the capability of incorporating both hydrophilic and lipophilic drugs. They can be employed in improving bioavailability and obtaining sustained release of the drug. They incorporate drug in lipid carrier that can be composed of long chain fatty acids which are usually absorbed via chylomicron formation. This improves lymphatic transport of drugs and simultaneously the bioavailability, bypassing the portal circulation 3.

The objective of the current research work was to develop rosuvastatin loaded lipid nanocarriers by solvent emulsification-evaporation technique. Preliminary screening allowed determination of influence of various process parameters on development of nanocarriers. A two-factor, three-level full (32) factorial design enabled to study the effect of formulation components on development of nanocarriers. Hypothesis of the work involved improvement of oral bioavailability of rosuvastatin using long chain fatty acids like Precirol® ATO 5(Glycerylpalmitostearate) in conjunction with Tween® 80 (Polysorbate 80) as emulsifier-stabilizer to prepare drug loaded lipid nanocarriers.

A previously reported method by Alshamsan et al., (2014) 4 was employed for the development of ROS lipid nanocarriers, albeit with minor modifications. Briefly, ROS(0.25% w/v) and Precirol® ATO 5 (quantity varied as per experimental design) were dissolved in chloroform forming the lipid phase of emulsion. About 40%v/v of the aqueous phase was prepared by dissolving Tween® 80 (quantity varied as per experimental design) into de-ionized water. Lipid phase and aqueous phase were cyclomixed for 2 min to obtain a white milky emulsion.

This emulsion was added drop-wise to 60%v/v aqueous phase and kept under stirring at 1200 rpm using a magnetic stirrer. This resulted in o/w emulsion which was heated at 55±5°C under stirring until a clear dispersion was obtained. On evaporation of organic phase, the solution was immediately cooled in an ice-bath, with constant stirring, to form ROS lipid nanocarriers. Final volume was adjusted with cold deionized water.

32 experimental design (Table 1) describes the proportion in which independent variables Precirol® ATO 5 (X1) and Tween® 80 (X2) were used in the formulation of lipid nanocarriers. Entrapment efficiency and particle size were selected as dependent variables. Nine formulations were prepared in three sets in triplicate. Linear regression model was derived from Enter Method using SPSS version 11.5, statistical software. Significance terms were chosen at 95% confidence interval (p<0.05) for final equations. In addition, surface plots were obtained by Statistica-6, to represent the effect of independent variables graphically.

The effect of independent variables upon responses were modelled using the second order polynomial equation (1):

Where Y indicates predicted response; b0is the arithmetic mean response of 9 runs; b1 and b2 are the estimated coefficients for factors X1 and X2, respectively. Main effects (X1 and X2) represent average result of changing one factor at a time from its low to high value. Interaction (X1X2) shows how values of entrapment efficiency and particle size change when two factors are changed simultaneously. The polynomial terms (X12 and X22) are included to investigate non-linearity 5, 6.

To 10 mL volumetric flask, 1 mL of ROS lipid nanocarrier dispersion was added and volume was made up with acetonitrile. The mixture was sonicated for 10 min to achieve complete extraction of drug, followed by centrifugation at 3000 rpm for 10 min10. Solution was filtered using 0.2 µ membrane filter and 1 mL of filtrate was suitably diluted to 50 mL using mobile phase. The content of ROS was assayed by validated RP-HPLC method at λmax 241 nm.

For determination of EE, ROS lipid nanocarriers were precipitated by adding saturated sodium chloride solution. Clear liquid (I) and solid residue were collected after centrifugation (CS120GXL, Hitachi, Japan) at 10,000 rpm for 15 min at 4 °C. Solid residue was dispersed in 20 mL of de-ionized water to separate free drug from lipid nanocarriers and then separated by centrifugation. The clear

liquid (II) was added to the initial liquid (I) and the free drug content (Wfree) was determined by validated RP-HPLC at λmax 241 nm. Percentage EE was calculated according to the equation (2) 11.

The medium was continuously stirred on a shaking incubator maintained at 75 rpm and 37±0.5 °C. At specified time intervals, aliquots of 2 mL were withdrawn, filtered through membrane filter and analyzed using validated RP-HPLC at λmax 241 nm. Subsequently withdrawn aliquots were replaced with equal volume of fresh buffer to compensate for loss due to sampling and to maintain sink condition. In vitro release of drug was similarly performed in other media (i.e. buffer pH 4.6 and 6.8) to observe the effect of pH on drug release. The measurements were carried out in triplicate 12, 15, 16.

Intestinal permeability of drug from ROS lipid nanocarrier and plain drug suspension was performed as per procedure mentioned by Ibrahim et al., 2013 17. Briefly, samples containing drug equivalent to 2.5 mg were re-dispersed in Krebs ringer solution (pH 6.5) and charged into freshly isolated chick ileum segments and sealed at both ends. Sealed segments were immersed in 100 mL beakers containing oxygenated Krebs solution maintained at 37±0.5 °C. Aliquots of 2 mL were withdrawn at 15, 30, 45, 60 and 90 min and replaced with equal volume of fresh buffer. Amount of drug transported through intestinal segments was determined using validated RP-HPLC at λmax 241 nm. Likewise, permeability of drug through everted gut was also carried out 17.

For pharmacokinetic study, male Wistar rats (180-250g) were purchased from Bharat serum, Mumbai, India. Study protocol was approved by Institutional Animal Ethical Committee (IAEC Protocol Approval no. CPCSEA/SPTM/P-63/2014) and the experiments were conducted as per the norms of Committee for the Purpose of Supervision of Experiments on Animals, India.

About 100 μL of plasma sample along with 100 ng/mL of atorvastatin, as internal standard, was mixed with 1 mL ethyl acetate as extracting solvent (liquid-liquid extraction technique). The samples were vortexed for 5 min and then centrifuged at 4000 rpm for 10 min. Resulting supernatant (900 μL) was evaporated under a gentle stream of nitrogen at 40 °C using Nitrogen evaporator (Biotage Turbovap ® LV Workstation). The dried samples were reconstituted with sufficient amount of mobile phase, vortexed, centrifuged and injected on LC-MS/MS18. Pharmacokinetic parameters of all plasma samples for each group was calculated using Win Nonlin software®.

Prescreening was carried out to determine the effect of various process parameters on development of ROS loaded lipid nanocarriers. From Fig. 1 it is evident that 10%v/v of chloroform was inadequate in dissolving the required amount of components; while 15%v/v of chloroform ensured complete solubility of components. Lower concentration of organic solvent resulted in precipitation of components during emulsification stage leading to slow entrapment of drug. 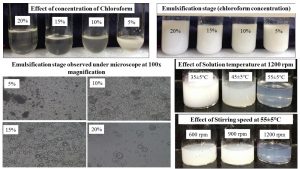 Optimization of ROS loaded lipid nanocarriers was carried out by employing 32 factorial design and the experimental runs with observed and predicted responses are depicted in Table 1. Least-square second order polynomial equations for entrapment efficiency and mean particle size are shown in equation (3) and (4), respectively: 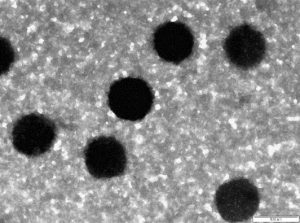 Solubility of ROS was more in alkaline media showing diffusion of >90% drug at pH 6.8 while at

pH 1.2 the diffusion was seen to be the least, owing to less solubility of drug in the acidic media. The release profiles of ROS lipid nanocarriers showed sustained release of the drug from the lipid matrix when compared with ROS suspension. The lipid nanocarriers showed comparable drug release pattern at all pH, with 20% release within initial 4h at pH 6.8, followed by sustained release. Comparative dissolution profiles of ROS suspension and ROS loaded lipid nanocarriers in multimedia are shown in Fig. 4. Since solubility of ROS was more in alkaline medium, pH 6.8 phosphate buffer is used as the diffusion medium to study the release kinetics. The ROS lipid nanocarriers followed first order release kinetics with r2 value 0.9803. 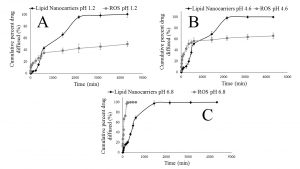 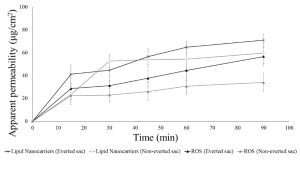 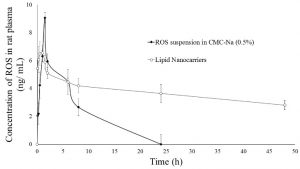 DISCUSSION: Selection of an appropriate lipid is an important criteria in development of lipid nanocarriers. The chemical nature of lipid contributes towards effective drug loading. Lipids containing fatty acids of different chain lengths have a tendency to offer more space to accommodate drugs by forming crystals with imperfections 8. Type of lipid selected also provides information about absorption pathway. As reported by Bandyopadhyay et al., 2012 20, long chain triglycerides are likely to enrich lymphatic transport of lipophilic drugs leading to higher oral bioavailability. In the current study, long chain fatty acid such as Precirol® ATO 5 was used as lipid.

During evaporation stage, the solution temperature was considered important, where lower temperature increased the processing time to more than 24 h and reduced the evaporation capacity of organic phase. Solution temperature closer to boiling point of organic phase was desirable to ensure complete evaporation of organic phase with less processing time. Based on preliminary study results, organic solvent concentration, stirring speed and solution temperature were fixed at 15%v/v, 1200 rpm and 55±5°C, respectively. Furthermore, 32 experimental design was used to determine the formulation parameters. EE of drug when viewed from lipid axis indicated increase in entrapment with increase in lipid amount, ascertaining the necessity of higher amount of lipid matrix for entrapping drug. However, increase in concentration of surfactant did not provide steady increase in the EE. At higher surfactant to lipid ratio, the entrapment was considerably reduced owing to solubility of drug in the aqueous micelles formed by surfactants.

PS of systems containing higher concentration of surfactant was found to be low (Fig.2).  For a given concentration of surfactant, as amount of lipid increased it caused decrease in PS, owing to micellar solubilization of drug (indicated by low EE) or tendency of surfactant molecules to reduce interfacial tension between lipid and aqueous phase by forming spherical shaped particles(revealed by TEM images). Thus from experimental design results it can be concluded that maximum EE was seen at lipid: surfactant ratio of 1:4.

Mean particle size of re-constituted freeze-dried powder of ROS lipid nanocarriers was comparatively higher due to the presence of mannitol as cryoprotectant. Placebo lipid nanocarrier and ROS lipid nanocarrier showed zeta potential of -4.39±1.04, -6.89±3.29 mV, respectively, where slight negative charge may be probably due to ionization of traces of free fatty acids present in the surfactant/ lipid. The dispersion was freeze-dried to improve the physical stability of lipid nanocarriers and obtained a zeta potential -19.6±4.58 mV, respectively. Thus, freeze drying of dispersion improved the physical stability of the nanocarriers. In addition to this, negative charge on the particles also influences closeness of nanocarriers to epithelium for drug absorption and surges particle uptake via Peyer’ patches 21. Negatively charged carriers show higher drainage into the lymphatic system 22, 23.

In addition to this, anionic nanocarriers encounter electrostatic repulsive forces from negatively charged matrix leading to faster lymphatic drainage and produce longer retention period of anionic particles in lymph nodes 23.This comportment will have an impact on sustained release of the drug from lipid nanocarriers. As observed by in vitro dialysis bag diffusion studies, it was evident that diffusion of drug from lipid nanocarriers at all pH was statistically insignificant (p>0.05), reflected to be highly favorable for efficient absorption of drug throughout the GI tract and was found to be sustained for prolonged period of time. While, in vitro release of drug from plain drug suspension was found to be pH-dependent.

ACKNOWLEDGEMENT: The authors would like to thank Astra Life care Pvt. Ltd. And Gattefosse India Pvt. Ltd. for providing gift samples of drug and excipient, respectively. Authors extend their thanks to SVKM’s NMIMS for providing infrastructure to carry out the work.

CONFLICT OF INTEREST: The authors report no conflicts of interest.

D. Suares and B. Prabhakar *