ORAL NANO-EMULSION OF FENUGREEK OIL FOR TREATMENT OF DIABETES

ORAL NANO-EMULSION OF FENUGREEK OIL FOR TREATMENT OF DIABETES

ABSTRACT: Diabetes mellitus (DM) is one of the principal causes of death in the world. DM causes many diseases with different pathogenesis disturbing glucose, protein and lipid metabolism. The primary characteristic is elevated glucose, blood level, which may be due to deficiency in the secretion of insulin and / act. Fenugreek oil is covered to recover glucose levels, intolerance, and insulin sensitivity as compared to the diabetic group. It is claimed that there is less damage of β-cell of pancreatic islet after dosing of fenugreek oil in diabetic rats. The objective of the study was to formulate a nano formulation of fenugreek oil, so as to enhance the effectiveness of fenugreek oil in treating induced diabetes by intraperitoneal (IP) injection of streptozocin (45 mg / kg) in Wistar albino rats, since nano formulation is claimed to enhance the bioavailability of bioactive compounds. A nano-emulsion was developed by adopting emulsion phase inversion and emulsion titration technique. The nano-emulsion with droplet size with less than 100 nm in diameter was stabilized by non –ionic surfactants. Ternary systems of three components made up fenugreek oil, Tween 80 and distilled water were set up at different weight ratios and mixed via vortex agitation. From this study it was clear that the developed nano formulation has considerably reduced the glucose level in blood in the diabetic rats, whereas there is no reduction in cholesterol, HDL cholesterol, blood level in diabetic rats, whereas a significant reduction in LDL cholesterol level is realized.

INTRODUCTION: DM is highly dominant and has potential detrimental effects on a patient's health, which can result in a complicated condition is a major health concern 1. DM is one of the major cases of demise in the world 2. DM is a made up of various disorders with different pathogenesis that affect glucose, protein and lipid metabolism. The primary characteristic is elevated glucose level that results from either deficiency in insulin secretion, and / or act.

Numerous pathogenic courses are taken in the development of diabetes e.g. Autoimmune destruction of the β-cells of the pancreas, abnormalities that lead to insulin resistance.

In reference to damaging properties of the chemical synthesized medicines, incapability of current medicines to control features of DM disorders, the high medicines cost, other strategies for present pharmacotherapy of DM is immediately needed. The utilization of herbal medications will be the alternative medicines; as those herbal medicines are showing less toxicity, harmless and are with minimum side effects 3.

Macro-emulsions or dispersions are made of immiscible liquids that are thermodynamically unstable. Emulsion stability relies very much on the droplet diameter. In macro emulsion the droplet is greater than 1000 nm, which subjects them to gravity forces. By varying formulation technique, various size distributions can be realized, elucidating the relationship between emulsion stability and the formulation technique. Owing to the small size of droplets, nano-emulsions are subjected to Brownian motion that prevents their sedimentation and creaming, and appear transparent. As compared to microemulsions, nano-emulsions are metastable that can be cut with water without bearing on the size distribution 6. Nano-emulsion has identical small droplets that are kinetically stable. Nanoemulsion increases the bioavilability of low bioavailable pharmaceutical compounds 7.

Nano Emulsion: Different nano-emulsions with size of droplet diameter that less than 100 nm which were stabilized by short chain surfactants, were prepared by emulsion phase inversion and emulsion titration. The developed formulation were consisting of three components fenugreek oil, (Captain, Cairo-Egypt), Tween 80, (Loba Chemie), and distilled water was set up at varying weights ratios by vortex agitation. The developed nano and micro-emulsion formulations were characterized by optical clarity (e.g. Transparency and opacity), and visual observation for their phase separation. Developed formulations were also analyzed for particle size, particle size distribution, and viscosity.

Experimental Animals: Albino Wistar rats (male), with 150-200 g body weights were taken from the animal’s room in the faculty of pharmacy, at Northern Border University. Rats were maintained on a pellet diet, water ad libitum. Animals held on under conditions of controlled temperature and humidity. Animal handling was approved by ethics commission at the Northern Border University, KSA.

Diabetes Induction: Animals were fasted for 18 hours overnight and water ad libitum. Animals weighed & DM induced by a single intraperitoneal (IP) injection of streptozocin solution freshly prepared in sodium citrate solution pH 4 at a dose of 45mg / kg. Rats were kept on 10% glucose solution for 24 hours as to prevent hypoglycemia. 72 hours, later animals were checked for blood glucose level. Animals with a blood glucose level > 200mg/dl are taken as diabetic.

Experimental procedure: Twenty Wistar Albino rats (male) distributed into four experimental groups (group 1, 2, 3 and 4) where five rats were analyzed in each group. Group 1, 2, and 3 is diabetic animals while group four was a normal control (non –diabetic). The four groups are as following:

Blood collection and analyses: Blood samples were collected from the orbital sinus, after seven days of treatment. Serum was used to control for glucose, cholesterol, HDL, LDL level using the kits of Human Diagnostic World Wide.

Body Weight: All different groups have indicated no substantial deviation between the initial weight (weight at time zero) and the final weight (after seven days) i.e. the animal's weight almost remains constant. Again, all groups have presented a numerical increase in weight, except for the group given nanoemulsion, which has demonstrated a numerical reduction in their weight (Table 1). 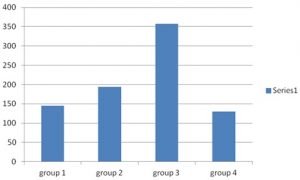 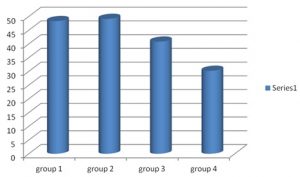 HDL Cholesterol: The nano - emulsion group has a shown a highly important difference in HDL values as compared to oil group, normal control, while it presents an insignificant difference as to the +ve control. 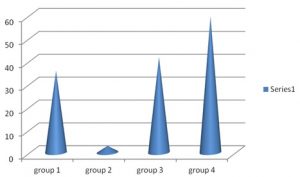 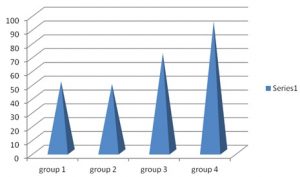 ACKNOWLEDGMENT: We would like to express our gratitude to the Deanship of scientific research in the Northern Border University, KSA, for financing this research project (Research project No: PHM-2016-1-6-F-4622).