Orthosiphon stamineus (Family: Lamiaceae) has becoming one of the popular medicinal plants in Malaysia due to its high beneficial effects in treating diabetes mellitus, hypertension and kidney stones. The present study was conducted to evaluate the mechanism of O. stamineus in affecting metabolism of aminopyrine in female rat hepatocytes via second messenger pathway. Liver perfusion was used to isolate hepatocytes from the healthy female Sprague Dawley (SD) rats. Isolated perfused rat hepatocytes were pretreated with several enzyme inhibitors/stimulant targeted on the protein kinases, phosphatase and phosphodiesterase. From the results obtained, only the activity of aminopyrine N-demethylase in female rat hepatocytes pre-treated with KT5720 showed significantly increased in the presence of 1 ng/ml (P<0.05) of O. stamineus extract. For conclusion, 1 ng/ml of O. stamineus extract increased the metabolism of aminopyrine in rat hepatocytes by inhibiting the protein kinase- A activity.

INTRODUCTION: Orthosiphon stamineus belongs to the family of Lamiceae, is commonly used to treat diabetes mellitus, hypertension and gout problems in many Southeast Asia countries 1. In many European countries, O. stamineus is consumed as herbal tea to promote health due to its high antioxidant property 2.

Recent researchers from Universiti Sains Malaysia had reported that rosmarinic acid is the main component in the methanol extract of O. stamineus with concentration ranging from 5.1 % to 29.9% of the total dry leaf weight. Concentrations of 3’-hydroxy-5, 6, 7, 4’-tetramethoxyflavone (TMF), eupatorin (EUP) and sinensetin (SEN) ranged from 0.05% to 0.69%, 0.34% to 3.37% and 0.22% to 1.76% respectively 3. Hence, it has a great potential to be commercialized due to its high medicinal value.

The information with regard to the potential interaction of this plant with other modern drugs is still limited. Previously, we have reported on the in vitro effect of O. stamineus on the activity of aminopyrine N-demethylase in female rat hepatocytes 4. Precaution should be taken due to the possibility of causing herb-drug interaction if both are consumed at the same times. Herb-drug interaction can be defined as any alteration either in the pharmacokinetic or pharmacodynamic effect of the drug caused by concurrent treatment with herb and drug.

Herb-drug interaction can be generally divided into pharmacokinetic and pharmacodynamic interactions 5. The liver is one of the hardest working organs in the body for xenobiotic and drug metabolism and detoxification process 6.

Hence, the liver is always the target for the researchers to examine the possible herb-drug interaction via metabolism aspect. The objective of the present study was to elucidate the possible in vitro mechanism of O. stamineus on the induction of aminopyrine metabolism in female rat hepatocytes through second messenger pathways.

Plant Extract Preparation: The leaves of the plant were collected in the late afternoon, from 30–45 days old white flowered plants. The leaves were chopped and dried at approximately 40°C for three days. Methanol extract of O. stamineus was prepared using a proportion of 10 g dried leaves in 100 mL of methanol by warming for four hours at 40°C.  The solution was filtered through filter paper (Whatman No.1), concentrated and spray-dried to obtain the crude methanol extract 3.

Isolation of Hepatocytes: A total of six young female Sprague Dawley rats weighing 100-120 g were used in the present study. Isolated hepatocytes were prepared by using the collagenase perfusion technique 7. The project was approved by Institute Animal Ethical Committee, Universiti Sains Malaysia. The present study was completed in the department of Pharmacology, School of Pharmaceutical Sciences, Universiti Sains Malaysia. Viability of the hepatocytes was determined using trypan blue exclusion method. Only hepatocytes samples with the percentage of viability above 85 % were used for the aminopyrine N-demethylase assay.

Aminopyrine N-demethylase Assay: The experimental groups were divided as follows:

s: Freshly isolated hepatocytes (6000 cells) suspended in incubation medium, were pre-incubated in the presence of dimethyl sulfoxide (DMSO) (vehicle for enzyme inhibitors/stimulants) for 15 minutes. Aminopyrine (25mM) was added and the hepatocytes incubated for further 18 minutes. Aminopyrine N-demethylase activity was determined by measuring the quantity of formaldehyde according to the colorimetric method of Nash (1953) 8.

Positive control: Freshly isolated hepatocytes (6000 cells) suspended in incubation medium were pre-incubated in the presence of cellular inhibitors/ stimulants for 15 minutes. Aminopyrine       (25 mM) was added and the hepatocytes incubated for another 18 minutes and the aminopyrine N-demethylase activity was analysed as above.

Treatment group: Freshly isolated hepatocytes (6000 cells) suspended in incubation medium were pre-incubated in the presence of cellular inhibitors/ stimulants for 15 minutes. Different concentrations of O. stamineus (0.01 ng/ml - 1 ng/ml) and aminopyrine (25 mM) were added and the aminopyrine N-demethylase activity was analysed as above. 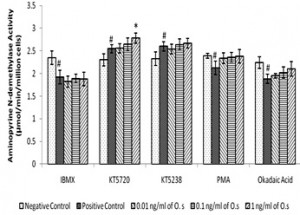 FIG 1: EFFECT OF ORTHOSIPHON STAMINEUS ON AMINOPYRINE N-DEMETHYLASE ACTIVITY IN FEMALE RAT HEPATOCYTES IN THE PRESENCE OF CELLULAR INHIBITORS AND STIMULANTS

DISCUSSION: Aminopyrine [C13H17N3O] is used for producing drugs for antipyretic, analgesic, antirheumatic and sedative agents 9. Aminopyrine N-demethylase enzyme is categorized as N-dealkylation reaction, which belongs to one of the oxidation processes in the phase I hepatic drug metabolism reaction 9. Aminopyrine metabolism in rats is primarily metabolised in vivo by the same or closely related major phenobarbital-inducible cytochrome P-450 isoenzymes with hexobarbital but not with the 3-methylcholanthrene-inducible cytochrome P-450 isoenzymes 10.

Aminopyrine is mainly N-demethylated by CYP P450 3A and 2B in rats although many other isoforms of cytochrome P450 are also involved 11-12. Niwa et al (1999) have determined aminopyrine N-demethylase activity in 11 forms of human hepatic cytochrome P450s expressed in yeast Saccharomyces cerevisae and for human steroidogenic CYP17 expressed in Escherichia coli 13. CYP 2C19 exhibits highest affinity and is most efficient in catalysing aminopyrine N-demethylase, followed by CYP 2C8, 2D6, 2C18 and 1A2. Natural compounds such as flavonoids, alkaloids and phenolic compounds have been previously reported to be able to modulate the activity of CYP P450 in humans and experimental animals.

In addition, all the cofactors and biochemical substances needed for reactions are contained within the hepatocytes 16. The incubation of rat hepatocytes for 18 minutes with methanol extract of O. stamineus may only see the direct effect on the methanol extract of O. stamineus on the existing aminopyrine N-demethylase enzyme kinetic profile such as inhibition or stimulation effect but not due to the synthesis or expression of cytochrome P450.

A total of five cellular inhibitors or stimulants mainly reacting on cyclic adenosine monophosphate (cAMP), cyclic guanosine monophosphate (cGMP), phosphatidyl inositol were selected. 3-isobutyl-1-methyl-xantine (IBMX) is used as a non-specific inhibitor for phosphodiesterase enzyme in the cAMP and cGMP pathway 17. Phosphodiesterase enzymes are responsible for the hydrolysis of cAMP and cGMP to ATP and GTP respectively. A total of three cellular inhibitors/stimulants known as KT5720, KT5823 and Phorbol-12β-myristate-13-α-acetate (PMA) were selected to examine the protein kinases in the cAMP, cGMP and phosphatidyl inositol pathway. KT5720 and KT5823 were used as specific inhibitor for protein kinase- A (PKA) and protein kinase- G, respectively 18-19.

On the other hand, PMA was used as stimulants for activation of protein kinase- C 20. In general, protein kinases are involved in the transfer of γ-phosphate group from ATP or GTP to the side chain that contains a hydroxyl group, such as serine, threonine or tyrosine in a substrate protein or known as phosphorylation 21. To evaluate the possible molecular mechanism on phosphatase enzyme, okadaic acid (OA) was used as inhibitors for protein phosphatase 1 and 2A 22. The phosphate group is removed by the action of specific protein phosphatases that restore the particular protein phosphorylation system to its basal stage.

CONCLUSION: As a conclusion, the effect of O. stamineus on the activity of aminopyrine N-demethylase in female rat hepatocytes was mediated through the inhibition of protein kinase- A in cAMP pathway. The active compounds that responsible for this action need to be elucidated in future.

ACKNOWLEDGEMENTS: Authors would like to thank the financial support from the Malaysian Ministry of Science, Technology and Innovative and Prof. Zhari Ismail for supplying the methanol extract of O. stamineus.