ABSTRACT: Simple, sensitive and selective methods are developed for the spectrophotometric determination of drugs, viz., Esmolol hydrochloride (ESM), Ramipril (RAM), Gemifloxacin (GEM), Terazosin (TRZ) and Moxifloxacin (MOX), based on their reactivity towards KMnO4.  Beer’s law is obeyed in the concentration of 4-28, 4-28, 2.6-18.2, 1.5-10.5 and 1-7 μg ml-1 for Esmolol hydrochloride, Ramipril, Gemifloxacin, Terazosin and Moxifloxacin. The methods involve the addition of excess KMnO4 of known concentration in the presence of 2M H2SO4, reactants are allowed to react and the unreacted KMnO4 is estimated with a fixed amount of Methyl Orange by measuring the absorbance at 507nm. Results of analyses were validated statistically. Statistical comparison of the results with the reference method shows excellent agreement and indicates no significant difference in accuracy and precision. These methods have been applied for the determination of drugs in their pure form as well as in tablet formulations. These methods have been validated in terms of guidelines of ICH.

INTRODUCTION: Esmolol hydrochloride (ESM) is a class II antiarrhythmic and is chemically known as methyl (RS)-3-{4-[2-hydroxy-3-(propan-2-ylamino) propoxy] phenyl} propanoate hydrochloride (Fig. 1). It is cardio selective beta 1 receptor blocker with rapid onset. 1 It is used in the treatment for the rapid control of heart rate. ESM decreases the force and rate of heart contractions by blocking beta-adrenergic receptors of the sympathetic nervous system. Its recent quantification method is reported 2 wherein other methods of quantification have been mentioned.

Ramipril (RAM) is chemically known as (2S, 3aS, 6aS) -1[(S)-N-[(S) -1-Carboxy-3-phenylpropyl] alanyl] octahydrocyclopenta pyrrole-2-carboxylic acid, 1-ethyl ester (Fig. 2). It is highly lipophilic, long acting orally active angiotensin converting enzyme (ACE) inhibitor with antihypertensive activity. An inactive prodrug, Ramipril is converted to ramiprilat in the liver and is used to treat hypertension and heart failure, to reduce proteinuria and renal disease in patients with nephropathies, to prevent stroke, myocardial infarction and cardiac death in high-risk patients. Ramiprilat, the active metabolite, competes with angiotensin I for binding at the angiotensin-converting enzyme, blocking the conversion of angiotensin I to angiotensin II. 3 As angiotensin II is a vasoconstrictor and a negative feedback mediator for rennin activity, lower concentrations result in a decrease in blood pressure and an increase in plasma rennin. Ramiprilat may also act on kininase II, an enzyme identical to angiotensin-converting enzyme that degrades the vasodilator bradykinin. Recent determination method 4 is preceded by many methods cited therein.

Gemifloxacin (GEM) is chemically known as 7-[(4Z)-3-(Amino methyl)-4- methoxyimino-pyrrolidin-1-yl]-1 -cyclopropyl-6-fluoro-4-oxo-1, 8-naphthyridine-3- carboxylic acid (Fig. 3). It is used to treat a variety of bacterial infections. This medication belongs to a class of drugs called quinolone antibiotics. It works by stopping the growth of bacteria. This antibiotic treats only bacterial infections. 5 It will not work for virus infections. Determination of Gemifloxacin reported in which past methods are   reviewed. 6

Terazosin, (TRZ) 6, 7-dimethoxy-2-[4-(tetrahydrofuran-2-ylcarbonyl) piperazin-1-yl] quinazolin-4- amine, (Fig. 4) is a selective potent α1 adreno-receptor antagonist. It is an effective drug for hypertension and benign prostatic hyperplasia. It is used in men to treat the symptoms of an enlarged prostate (benign prostatic hyperplasia or BPH), which include difficulty urinating (hesitation, dribbling, weak stream, and incomplete bladder emptying), painful urination, and urinary frequency and urgency. It also is used alone or in combination with other medications to treat high blood pressure. Terazosin is in a class of medications called alpha-blockers. It relieves the symptoms of BPH by relaxing the muscles of the bladder and prostate. It lowers blood pressure by relaxing the blood vessels so that blood can flow more easily through the body. It is recently quantified by UV spectrophotometric method. 7 The report includes past quantification references on the drug.

Structures of the drugs:

Assay Procedure: Aliquots of pure drug solution (1 to 7mL) were transferred into a series of 10mL calibrated flask. To each flask, 1mL of 2M H2SO4 was added, followed by 1mL of KMnO4 solution (63.2 µg mL–1). The contents were mixed and the flasks were set aside for 15 min under occasional shaking. Finally, 1mL of 80µg mL–1 Methyl Orange solution was added to each flask, diluted to the mark with water and the absorbance of solution was measured at 507nm against a reagent blank. Calibration curves were constructed for all the drugs by plotting the absorbance versus the concentration of drugs. The absorbance data was collected for six replicate experiments and absorbance to concentration ratio called the relative response was determined. The relative responses from 95% to 105% of average only are considered for construction of the Calibration curves shown in Fig. 6. 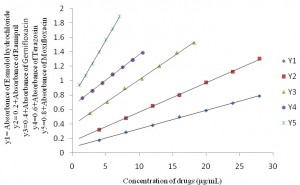 Procedure for Assay of Pure Drug:

Sample solutions of each drug in the beer’s law limits were chosen and recovery experiments were performed to check the accuracy and precision. The concentration chosen and recovery are tabulated in Table 2. For this purpose standard deviation method also adapted. Excellent recovery and %RSD being less than 2 speaks about the precision and accuracy of the method.

Five tablets (Cardesmo, 100mg), were grounded and the powder equivalent to20 mg of Esmolol hydrochloride was weighed, taken into 25mL of methanol, sonicated for 20min and filtered through Whatmann filter paper No 42. The residue was washed twice with methanol for complete recovery of drug and methanol was evaporated. The residue was dissolved in 100mL of distilled water .It was used as stock sample solution and was further diluted with the same solvent to get working standard solution.

Ramipril: Ten tablets (Acepril, 5mg) were weighed and grounded. A quantity equivalent to 20mg of Ramipril was dissolved in methanol and sonicated for 30min.Then filtered using a Whatman No. 42 filter paper. The residue was washed twice with methanol for complete recovery of drug and methanol was evaporated. The residue was dissolved in 100mL of distilled water and the assay was completed according to the procedure described above.

Gemifloxacin: Two tablets (Ad Gem, 320mg) of drug were weighed and grounded and transferred into a 100mL calibrated flask and added 30mL of distilled water followed by sonnication for 15 minutes. The solution was finally made up to 100mL. It was used as stock sample solution and was further diluted with the distilled water to get working concentration solution for assay

Terazosin: About twenty tablets (Terazen, 2mg) were weighed and grounded. The powder equivalent to200mg Terazosin was stirred well with methanol, sonicated about 30 minutes. The solution was filtered through Whatmann filter paper and the residue was washed well with methanol for complete recovery of the drug and methanol was evaporated. The residue was dissolved in 100mL of distilled water and it was further diluted to get required concentration for the analysis of the drug.

Moxifloxacin: Two tablets (Crosmox, 400mg) were powdered and equivalent to about 20mg of Moxifloxacin had been taken in to a100mL of volumetric flask and added about 30mL of methanol, sonicated for 30 min and filtered through Whatmann filter paper No 42. The residue was washed thrice with methanol for complete recovery of drug and methanol was evaporated. The residue was dissolved in 100mL of distilled water .It was used as stock sample solution .The aliquot portions of this stock solution were further diluted with distilled water to get the final concentration required for the determination of the drug.

Preliminary experiments were conducted to determine the maximum concentrations of Methyl Orange spectrophotometrically by measuring the absorbance of their acidic solutions at their respective λmax and the upper limits were found to be 8µg –1 for Methyl Orange. KMnO4 concentration of 6.32µg mL–1 was found to bleach the color due to 8µg mL–1 Methyl Orange. Hence different amounts of drug reacted with 6.32µg mL–1 KMnO4 in this method before determining the residual KMnO4 as described under the respective procedure.

Sulphuric acid was found to be a convenient medium for these methods. For a quantitative reaction between drug and KMnO4, a contact time of 15min was found sufficient.

A linear correlation was found between absorbance at λmax and concentration of all drugs in the ranges given in Table 1. Regression analysis of the Beer’s law data using the method of least squares was made to evaluate the slope (b), intercept (a) and correlation coefficient (r) for each system and the values are presented in Table 1. The optical characteristics such as Beer’s law limits and Sandell sensitivity values for these methods are given in Table 1. The limits of detection (LOD) and quantitation (LOQ) calculated according to ICH guidelines 13 are also presented in Table 1 and reveal the very high sensitivity of the methods.

b = slope of Calibration plot.

Intra-day precision was assessed from the results of six replicate analyses on pure drug solution. The mean values and relative standard deviation (RSD) values for replicate analyses at three different levels (amounts/concentrations) were calculated. To evaluate the inter-day precision, analysis was performed over a period of five days, preparing all solutions afresh each day. The accuracy of the methods was determined by calculating the percentage deviation observed in the analysis of pure drug solution and expressed as the relative error. Table 2 summarizes the intra-day precision and accuracy data for the assay of pure drugs solution by the proposed methods.

To evaluate the robustness of the methods, volume of Sulphuric acid was slightly altered. The reaction time (after adding KMnO4, time varied was 15 ± 2min) and the time after addition of dye is slightly changed. To check the ruggedness, analysis was performed by three different analysts and on three different spectrophotometers by the same analyst.

The proposed methods are applied to the determination of drugs in tablets. The results in Table 3 showed that the methods are successful for the determination of drugs and that the excipients in the dosage forms do not interfere. The results are compared to the available validated reported 14-18 methods on each drug and the results agree well with the claim and also are in agreement with the results obtained by the literature method. Statistical analysis of the results using Student’s t-test for accuracy and F-test for precision revealed no significant difference between the proposed methods and the literature method with respect to accuracy and precision.

*Limit of determination as the weight in μg per mL of solution, which corresponds to an absorbance of A = 0.001 measured in a cuvette of cross-sectional area 1 cm2 and path length of 1 cm. Y** = a+bX, where Y is the absorbance and X concentration of drugs in μg per mL

TABLE 2: DETERMINATION OF ACCURACY AND PRECISION OF THE METHODS ON PURE DRUG SAMPLES

TABLE 3: RESULTS OF ASSAY OF TABLETS BY THE PROPOSED METHOD AND STATISTICAL EVALUATION

CONCLUSION: These are simple, rapid, and cost-effective methods for the determination of drugs have been developed and validated. The proposed methods are more sensitive methods and the methods rely on the use of simple and cheap chemicals and techniques but provide sensitivity comparable to that achieved by sophisticated and expensive technique like HPLC. Thus, they can be used as alternatives for rapid and routine determination of bulk sample and tablets.

ACKNOWLEDGEMENTS: The authors are thankful to the Head, Department of Chemistry, Osmania University, Hyderabad-500007 for providing facilities. One of the authors Tirupathi B is thankful to CSIR for SRF.