INTRODUCTION: Child abuse or neglect is common worldwide, and it seems to be epidemic in several parts of the world, with the most common forms being emotional maltreatment, physical abuse, sexual abuse and physical neglect 1. Since the beginning of reporting child abuse in the 1960s, the number of victims increasing each year. Among ages 0 to 5 years, child abuse and neglect may represent a prime source of injury and death 2. One of the most apparent obstacles toward implementing sound health and social welfare policies and intervention strategies is the lack of epidemiological data in this context.

However, in recent years new approaches have been developed to characterize the nature and magnitude of child abuse and neglect 3. Child abuse and neglect is a multifaceted life practice that happens once a parent or caregiver does intend or possible harm to a child, comprising doings of command and omission. Child abuse is a common episode, but rarely predictable. Thus, it is difficult to find out the exact number of cases due to the large unevenness in reported epidemiological data across diverse studies in this context.

Health care practitioners are the most appropriate to the group to face the tragedy of child abuse, as they have the chance to see most of the child's family members and consequently can explore the child abuse associated factors 4. Although several studies are assessing the awareness regarding child abuse, there is a lack of data showing the exact figures of child abuse in the country. In a study from Saudi Arabia to find out the family profile of child abuse, physical abuse was the most common form of abuse (42%), followed by neglect (39%), sexual abuse (14%), and emotional abuse (4%) 5. Therefore, this study aimed to assess parent’s awareness related to child abuse measures.

MATERIALS AND METHODS: This was a cross-sectional survey of 400 Saudi parents about child abuse-related factors. All participants were 20 years or older.  Participants were randomly selected from the general community regardless of social class, economic status, or education level. A purposeful questionnaire was designed, and information was obtained during a personal interview. Besides demographical data such as age, gender, residence, education level, social class, family income, and family type, the questionnaire also included questions.

Ethical Consent: Each participant was asked to sign a written ethical consent before the interview. The study was approved by the Ethical Committee at the College of Medicine, University of Ha’il.HREC00136/CM-UOH.04/20. 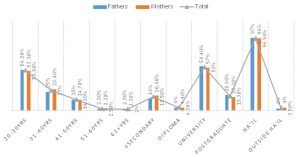 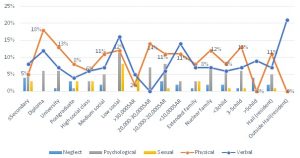 DISCUSSION: Although child abuse and child neglect are prevalent worldwide, it is infrequently reported in many countries, mostly in regions where it muddled with some social customs. In Saudi Arabia, like most other countries, there is a lack of data regarding child abuse and exact neglect investigations. Available literature pertains to the assessment of awareness in different Saudi regions, which greatly vary. As a result, this study aimed to assess the parent’s awareness related to child abuse measures.

In the current study, about 24% (23.4% were fathers, and 24.4% were mothers), have witnessed child abuse during the past 12 months. The most frequently observed child abuse in this study was physically followed by verbal then psychological. According to our literature search, the frequently reported form of child abuse reported from Saudi Arabia was sexual abuse, which constituted only 7.3% of the witnessed child abuse measures in this study. A previous study from Saudi Arabia has reported physical abuse (42%) as the most common type of child abuse followed by psychological (14%) and sexual (4%). Moreover, neglect was reported by 39% in the same study 5. In a study to inspect the prevalence of sexual child abuse in Saudi Arabia, 16% of the children reported their exposure to one or more types of sexual abuse, particularly boys who lived with step-parent 6, 7. In the present study, girls (57%) were more frequently exposed to child abuse than boys (43%). However, these percentages may vary according to the type of child abuse. When psychological abuse was more frequent among girls, sexual abuse was reported to be more common among boys 6.

In the present study, the parent represents the most common source of child abuse. In a study to assess Saudi opinions regarding child abuse, as well as the influence of child abuse on emotional health, 34% of the parents claimed a childhood history of child abuse. About 18% of the parents employed physical punishment. The most common forcefully child abuse accelerators are a history of childhood abuse, young parent, poor self-control, and witness of domestic violence 8. Concerning parents' awareness of some child abuse-related factors, such as think burning, think keeping a child alone, think to bite a child, and think to harm a child. Parents in this study showed high levels of awareness. However, fathers have shown significantly better awareness than mothers. However, for smoking near the kids, both mothers and fathers have shown relatively lower levels of awareness. In the current study, child abuse was witnessed reversely with the increase in education level. There is a sparsely of literature correlating child abuse with parent's level of education. However, designed educational programs targeting the attitude of the parent were effectively improved parent attitude and many safe children compared to programs delivered by conventional childcare programs in health centers 9.

Child abuse was more frequently witnessed among parents with lower monthly income. Economic status is a factor that determines some degree of child abuse, particularly when the neighborhood is rich 10. Moreover, more child abuse was observed among nuclear families compared to extended families. Such indications were previously reported 11. Though the current study makes available large information for health policymakers for implementing better strategies to prevent child abuse, it has some limitations, including its cross-sectional setting and qualitative measures.

CONCLUSION: Child abuse is common in Saudi Arabia, with the most frequent being physical, verbal, and emotional. Fathers possessed higher levels of awareness towards child abuse-related factors compared to mothers. Educational programs are deemed important to improve the parents' attitude toward child abuse measures.

ACKNOWLEDGEMENT: The author would like to thank all participants for their time and decent assistance.

CONFLICTS OF INTEREST: The author declare no conflicts of interest