In present study methanol was selected for the large scale extraction because of the easy avibality. This was further purified (partially) using silica gel column column chromatography. Partially purified fractions used for polyphenolic and antioxidant study.

The dried residue (15 gm) was mixed (homogenized) with silica gel 60 - 120 and ethyl acetate was added prepare slurey and then dried in IR lamp. After that  it was subjected to column chromatography , using a 44 × 4.5 cm glass column filled with silica gel (mesh size: 60-120). The extract dried powder was layered at the top of the column. After bedding down of the gel material, fractionation was conducted by successive changing polarity of hexane: ethyl acetate (0%:100%).

Ten fractions were collected by observing and comparing TLC pattern. The TLC plate’s pattern (Merck 0.25 mm silica gel plates 1 mm (20 cm × 20 cm)) developed in a ethyl acetate and hexane solvent system and visualized in Iodine chamber. Solvent was removed by rotary evaporation in vacuo at 37 0C and dried fractions were suspended in methanol and DMSO (1mg/ mL). Which was used for polyphenolics and antioxidant and activity study.

Total polyphenolic content was analyzed by the Folin–Ciocalteu method 9. The reaction mixture (3.6 mL) contains 20µL of sample, 3.2 ml of distilled water, 100µL of FC reagent; 300 µL of 60µg of saturated sodium carbonate was incubated at 370C for 30 min in water bath the absorbance was read at 765 nm was measured in triplicate. Gallic acid (100µg/mL) was used for calibration of standard curve. The results were expressed for polyphenolics as mg of gallic acid equivalent (mg GAE)/g of fraction.

Total antioxidant   potential of sample was determined by the Phosphomolybdate method 10. Final volume of the reaction 3.010 ml containing 3.0ml of (0.6 M sulfuric acid, 28 mM sodium phosphate, and 4 mM ammonium molybdate) 10 µL of the respective fractions incubated at 950C for 90 min. After the samples were cooled at room temperature, the absorbance of the aqueous solution of each fraction was measured at 695 nm against blank which contains 10µL of solvent. Antioxidant potential of fractions were expressed as mM of Ascorbic acid /g of dry wt. of fractions. The estimation was carried out in triplicate.

The FRAP assay was carried out according to the procedure of Benzie and Strain with modification 11.  FRAP reagent was prepared from sodium acetate buffer (300 mMol/L, pH 3.6), 10 mMol/L TPTZ solution in 40 mMol/L HCl and 20 mMol/L FeCl3 in 40 mMol/L HCl solution in proportions of 10:1:1 (v/v), respectively. The FRAP reagent was stored in cooled condition at 0-4 0C for five days. Before use the reagent was warmed to 37 °C in a water bath. 25µL of each fractions was added to 1.475 mL of sodium acetate buffer and 1.5 mL of FRAP reagent. The absorbance of the reaction mixture was then recorded at 593 nm after 5 min. The standard curve was constructed using FeSO4 solution (10–100 μMol/L). The results were expressed as μMol Fe (II)/g fraction.

The DPPH assay was carried out by 96 well plate methods 12. DPPH assay is based on the measurement of the scavenging ability of antioxidants towards the stable DPPH radical. The free radical DPPH, which shows absorption at 517 nm, is reduced to the corresponding fractions when it reacts with hydrogen donors. Stock solution of DPPH 1 mM was prepared in methanol and working solution 0.1mM prepared in methanol. 10 µg of partially purified fractipon was added in 100 µL of methanol and 100 µL of 0.1mMol of DPPH. The mixture was shaken and allowed to stand at room temperature in the dark for 10 min. The decrease in absorbance of the resulting solution was monitored at 517 nm at 10 min. The results were expressed in % of inhibition by following formula. 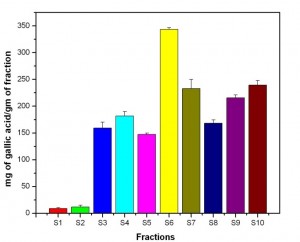 DPPH is a stable nitrogen-centred free radical the colour of which changes from violet to yellow upon reduction by either the process of hydrogen or electron donation. Substances which are able to perform this reaction can be considered as antioxidants and therefore radical scavengers. % inhibition ranked from 12.2 % for S4 fraction to 84.92 % for fraction S9 (Fig. 2). S9 (84.92 %), S8 (79.96 %), S7 (83.28%) and S6 (66.47%) fractions has high DPPH scavenging property. 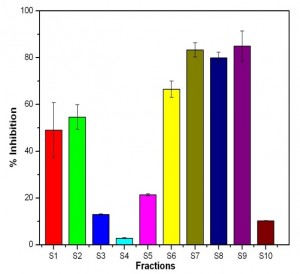 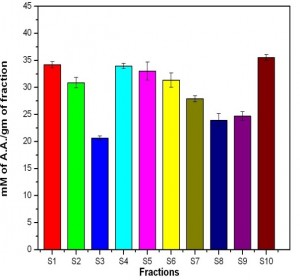 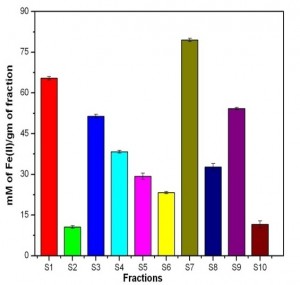 DISCUSSION: In this study, an investigation on in vitro antioxidant activities of Indian medicinal plant, A. calamus was carried out to verify the claimed traditional uses of the plant. Results have revealed that the hexane: ethyl acetate fraction of the whole plant was the most active in both experimental models. Bioactivity guided fraction through successive column chromatography procedures led to the isolation of a partially purified fractions of active compounds. Antioxidant studies of these fraction supports for A. calamus antimicrobial and hyperlipidemia activity in rat 13, 14. Polyphenolics content fractions have free radical scavenging ability. Past finding had been proved that polyphenolics are directly proportional for the free radical scavenging ability. Presence of the different antioxidant activity in different fraction can suggest the synergetic effect of the crude extract, in traditional medicine for treatments 15, 16. Further isolation of the active compounds on the basis of pharmacological activity is beneficial for new finding of drugs.