ABSTRACT: Nomuraea rileyi (Farlow) Samson is an entomopathogenic fungus capable of producing a variety of enzymes including proteases and chitinases. Protease derived from microorganisms such as fungi, bacteria, and yeast has established wide spread applications in fields such as in the food, detergent and other industries. This study investigates the strategy for partial purification and characterization of protease enzyme from Nomuraea rileyi. The fungus was primarily screened on skim milk agar plate and a clear zone of skim milk hydrolysis confirmed the protease production. The protease activity of 89 U/100 ml was observed in crude sample and then subjected to partial purification by ammonium sulphate precipitation followed by dialysis. The protease enzyme was partially purified to 3.64 fold with a yield of 3.5%. The partially purified protease exhibited optimum activity at pH 8.0 and temperature at 40ºC. Proteases can be used for various commercial purposes such as detergent, waste treatment, leather industry for dehairing the animal skins and degradation of natural proteins.  In the present study protease were tested upon blood stain and dye and was found to exhibit good detergent activity after 15 mins.

INTRODUCTION:The entomopathogenic fungus Nomuraea rileyi (Farlow) Samson is capable of producing a variety of enzymes including proteases and chitinases. Proteases are enzymes that are often considered vital in facilitating the host infection process 1. According to 2, fungal proteases are believed to play an important role in cuticle penetration of insects. 3 reported that fungi have a wide variety of enzymes than bacteria and proteases are among the most important enzymes produced by fungi. The protease from the entomopathogenic fungi is believed to be an important pathogenic factor for the fungal attachment on cuticle of insects 4

Proteases are one of the most important classes of enzymes which are expressed all the way through the animal kingdom, plant and as well as microbes 5. The immense diversity of proteases, in spite of their mode of action and specificity, has attracted worldwide consideration to exploit their physiological and biotechnological application. Alkaline protease of microbial origin hold considerable industrial potential due to their biochemical diversity and wide applications in silver recovery, tannery and food industries, medicinal formulations, detergents and processes like waste treatment 6, 7, 8.

Proteases are one of the most leading industrial enzymes, accounting for nearly 65% of total worldwide sales, employed primarily as cleansing additives. Protease derived from microorganisms such as bacteria, fungi, and yeast has found wide spread applications in many fields such as in the food, detergent and other industries 9, 10.

To make clear the precise role of the enzymes in the insect infection process, it is crucial to characterize and purify the enzymes. Clarification of the extracellular enzymes to the fungal infection process is held up mainly because of unavailability of pure enzyme preparations. The ideal purification strives to acquire the maximum recovery of the desired enzyme, with minimal loss of activity, combined with the maximum removal of other contaminating enzymes 11.

The aim of this work is to explain the processes which can be used to extract, purify and characterize protease enzyme related to Nomuraea rileyi. Such studies surely increase the knowledge on enzyme production in entomopathogenic fungi which opens new avenues for the utilisation of protease.

Microorganism and culture condition: Pure culture of Nomuraea rileyi (MTCC 4171) was obtained from Institute of Microbial Technology, Chandigarh, India and used for the present study. The strain was revived using potato dextrose agar media and preserved at 4ºC for further use.

Protease assay 12: The protease activity was assayed using casein as a substrate.  0.5 ml of 0.5% casein solution was taken in two different test tubes and 0.2ml of enzyme was added in one test tube and the other was added with water and served as blank. After 10 minutes of incubation, 2 ml of Trichloroacetic acid was added and incubated at 37ºC for 30 minutes. After the incubation time, the mixture was filtered through whatman filter paper and the filtrate was used for further colour development reaction. 5ml of 500 mM sodium carbonate was added to both the test and blank filtrate.

To that, 1:4 ratio of Folin Ciocalteu’s Phenol reagent was added and incubated at 37ºC for 30 minutes. Absorbance was read at 660 nm using Hitachi U 2900 UV-Spectrophotometer and the enzyme activity were calculated using tyrosine standard. One unit activity is the amount of enzyme hydrolyzes casein to produce colour equivalent to 1µmole of tyrosine per minute.

For every one hour the buffer was changed and finally the dialysis tube was kept overnight with distilled water. After dialysis, protein solution was centrifuged at 6000 rpm to remove large molecules.

Primary screening: The fungal strain Nomuraea rileyi was cultured on skim milk agar plate around which a clear zone was observed (Figure 1). This indicated that the strain has capability to produce protease enzyme. 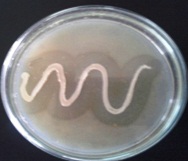 The enzyme assay was carried out as described earlier using casein as a substrate. The results (Figure 2) showed that the partially purified protease exhibit maximum activity at pH 8.0 whereas any further pH gave decreased activity. A similar trend was observed by 15.

The maximum activity at pH 8.0 showed that it may be alkaline protease. 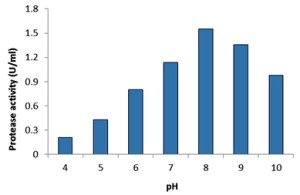 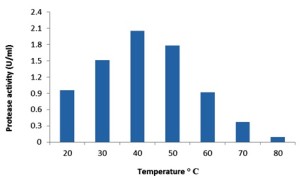 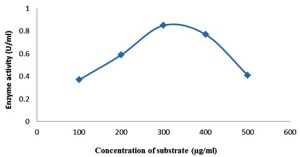 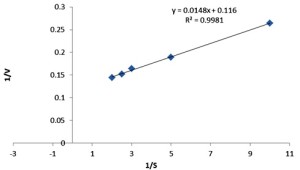 The Km and Vmax of partially purified protease were calculated from double reciprocal Lineweaver-Burk plot and found to be 130 µg and 0.87 U/ml respectively (Figure 5). The present study differs from the work of 16 who obtained a higher value of 148U/ml with Vmax its corresponding Km value of 58μM.

Destaining activity of protease on blood: When protease was applied on a white cotton cloth, the blood stain was removed by incubating the cloth with partially purified protease for different time intervals (Figure 6).  After 15 minutes of incubation the blood was completely destained by protease enzyme. It was observed that the partially purified protease from Nomuraea rileyi had high capability of removing the blood stain, which indicated that the protease enzyme has potential application in detergent industries 17 reported the protease from Bacillus clausii has the ability to remove the blood stain very effectively. 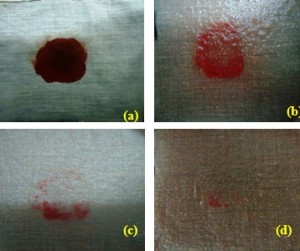 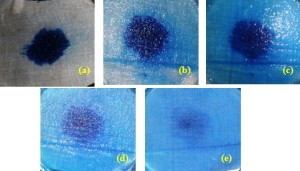 CONCLUSION: From the present study it was revealed that Nomuraea rileyi was capable of producing a considerable quantity of the protease enzyme and it was subjected to ammonium sulphate precipitation followed by dialysis. The protease enzyme was partially purified to 3.64 fold with a yield of 3.5 % and specific activity of 1.82 U/mg. The partially purified protease has optimum pH at 8.0 and temperature of 40ºC which showed a positive result in the removal of blood stains and dye from the cloths. Therefore this enzyme can be extensively used in the industrial applications in pilot scale.

ACKNOWLEDGEMENT: The authors are thankful to the Management and Principal of K.S.Rangasamy College of Technology, Tiruchengode, Tamil Nadu, India for providing the infra-structure facilities for the present study.