ABSTRACT: Partial purification and bioremediation of waste water by lipase from the marine actinomycete Streptomyces variabilis NGP 3 (Accession no: (JX843530)) were carried out. The optimum incubation period, pH, temperature and agitation speed for enzyme production were fifth day (61.2 U/ml), 9.0 - 9.5 (105 U/ml), 35ºC (39.4 U/ml) and 120 rpm (38.7 U/ml) respectively. Lactose (2.0 g/l) and peptone (0.6 and 0.8 g/l) proved to the best carbon and nitrogen sources respectively for lipase production. The partially purified lipase showed a specific activity of 1440.97 U/mg protein, 7.63 fold pure and yielded 3.19 per cent of protein. The enzyme activity was maximum at the pH and temperatures were 8.5 and 45ºC respectively. The molecular weight of the first and second isoenzymes was found to be 55.0 and 56.0 KDa respectively. Bioremediation of automobile effluent and slaughter house waste water were carried out by the isolated actinomycetes isolate S. variabilis NGP 3. The chemical oxygen demand (COD), total organic chloride (TOC) and fat/oil content of the effluent were analyzed. The COD and fat/oil degradation rate were increased by the simultaneous reduction of TOC in the treated effluent.

INTRODUCTION:Lipases (triaycl glycerol acyl hydrolases, EC 3.1.1.3) catalyze the hydrolysis and the synthesis of esters from glycerol and long chain fattyacids1. Lipases are obtained from microorganisms which produce a wide variety of extracellular lipases 2.

Many lipases are active in organic solvents where they catalyst a number of useful reactions including esterification, transesterification, regioselective acylation of glycerols, synthesis of peptides and other chemicals 3.

Lipases are mostly inducible enzyme and require some form of oil, fatty acid, fatty acid alcohol or fatty acid ester and surfactant for induction 4.  Recently, the interest in microbial lipase production has increased 5, because of its large potential in industrial applications as additives for foods (flavor modification), fine chemicals (synthesis of esters), waste water treatment (decomposition and removal of oil substances), cosmetics (removal of lipids), pharmaceuticals (digestion of oil and fats in foods), leather (removal of lipids from animal skins) and medical (blood glyceride assay) fields 6, 7, 8. Other useful features are such as broad substrate specificity, the versatility of the molecular structure and stability in organic solvents 9.

In view of the variety of applications, there has been renewed interest in the development of sources of lipases.

Higher concentration of these compounds in waste water often causes major problems in biological waste water treatment process (Bioremediation) is difficult due to the formation of monolayer on water surfaces and decrease oxygen transfer rate into the aerobic process. Bioremediation is interested by lipase producing microorganisms because lipid residues are converted to carbon-di-oxide, water and biomass 19.

Another well recognized problem in today’s world is releases of oil into the environment. Contamination of soil by oil causes the loss of soil fertility, water holding capacity, permeability and binding capacity.

Many species of microbes such as bacteria, fungi, yeast and actinomycetes are involved in the bioremediation process by obtaining energy and tissue binding material from petroleum and other automobile effluents 20.

pH: The activity of L- asparaginase was evaluated at different pH values. The flask containing 50 ml of the production medium was mixed with acid/alkali solution to obtain required pH. The growth and enzyme production were determined at the pH range of 5.0 to 12.5 at room temperature.

Temperature: The effect of temperature for growth and enzyme production were determined in the range between 25 and 70ºC.

Agitation: The effect of agitation in the range of 90 to 130 rpm was performed for growth and enzyme production.

Carbon sources: Galactose, lactose, mannose and sucrose (0 to 3.0 per cent) were tried as carbon sources for growth and enzyme production.

Assay of lipase activity: Lipase assay was done using olive oil as substrate in Tris-HCl buffer pH 8.5 22. A volume of 1.0 ml culture filtrate was added to 10 ml buffer and 10 ml olive oil emulsion. The reaction mixture was incubated at room temperature for 20 min. Then the reaction was terminated by adding 2.0 ml of acetone-ethanol mixture (1:1 v/v). The amount of fatty acid liberated was determined by titration with 0.05 M NaOH. One unit of lipase activity was defined as the amount of enzyme required to release 1µmol of fatty acid per ml per min under above assay conditions.

Partial purification of lipase enzyme: The purification procedure was referred to 23 method. The culture filtrate was collected through Whatman No. 1 filter paper and the filtrate was centrifuged at 4000 rpm for 10 min to obtain crude enzyme. Then the ammonium sulphate was added to the filtrate to give final concentration of 60 - 80 per cent (w/v) saturation at 4ºC.

Sephadex G 100 column chromatography: An aliquot of the lyophilized sample (1.0 ml) was loaded on to a sephadex G-100 column (45 X 1.5 cm) previously equilibrated with 0.02 M phosphate buffer (pH 7.8). Elution of lipase was performed by a linear gradient of NaCl (0-1.0 mol/l in equilibrating buffer) at 30 ml/h. The fractions of 5.0 ml each were collected for every one hour (30 fractions) and assayed for lipase and protein activity.

The above mentioned parameters were determined again after the effluents were treated with actinomycetes isolate S. variabilis NGP 3.

Experimental set up for automobile effluent and slaughter house waste water treatment: A volume of 1000 ml sample was taken in a conical flask which was inoculated with 1 per cent (v/v) actinomycete culture. After vigorous shaking, it was divided in to 20 portions of 50 ml effluent each in 250 ml conical flasks. All the flasks were incubated at room temperature at 120 rpm. Samples were taken at regular intervals of 24 hrs for the determination of TOC, COD and fat/oil content of the effluent.

Total organic chloride (TOC): Total organic chloride content was estimated26. The culture filtrate (10 ml) was digested with few drops of 0.3 N NaOH and added with 0.1 g of sodium bicarbonate in a porcelain basin. To this digested sample, 0.1 to 0.2 ml of 5 per cent potassium chromate was added and titrated against 0.02 N silver nitrate. Appearance of persistent chocolate brown colour precipitate was the end point. A blank was maintained with chloride free distilled water.

Chemical oxygen demand (COD): Chemical oxygen demand was estimated for the waste water 26. The diluted sample (1:1 v/v-50ml) was taken in a refluxing flask and added with 25 ml of 0.25 N potassium dichromate solution. To this, a pinch of silver sulphate and mercuric chloride (in the ratio of 10:1 to the chloride content of the sample) and 30 ml of concentrated H2SO4 were added and mixed thoroughly. A few anti bumping granules were added. The contents of the flask were refluxed for two hours cooled and make up to 350 ml with distilled water.

To this, 2-3 drops of ferroin indicator (0.695 g ferrous sulphate and 1.485 g/l, 10 phenonthronine monohydrate in 100 ml distilled water) was added and titrated against 0.25 N ferrous ammonium sulphate solution. The end point is the sharp color change from blue green to reddish brown. A blank was run simultaneously with distilled water instead of sample.

Estimation of fat/oil degradation: Fat/oil degradation is defined as the process by which oil is converted to a form that is no longer extractable by benzene 20. Oil conversion was determined by extracting 50 ml of incubation mixture with 10 ml of benzene in a separating funnel. The aqueous phase was extracted again second time with 10 ml of benzene and the combined benzene fractions were filtered through Whatman No. 1 filter paper in order to clarify the extract. The benzene was evaporated at 37ºC to constant weight in a tared large petri dish. The rate of degradation was expressed in milligrams (mg) as well as in per cent (%).

pH: Effect of pH on culture conditions and enzyme production were studied in the pH range from 5.0 to 12.5. The maximum growth (26.5 mg dry weight) was observed at pH 9.0; the production (105 U/ml) was maximum at pH 9.0 and 9.5.These data are in agreement with that of previous study 11, who reported that, maximum lipase activity from Fusarium oxysporum was detected at pH 9.5. In another report, the lipase production by Staphylococcus sp. Lp 12 required alkaline pH 21; whereas for Bacillus sp SS-1 the maximum production was found at 8.0 29. The maximum production of enzyme from S. aurofaciens and S. griseus were obtained in the range of pH 6.0 – 90 17 & 16.

In potassium nitrate supplementation, maximum growth of the mycelium and lipase (25.0 mg and 56.2 U/ml) were favored at 0.6 g/l concentration; in yeast extract variation, at 0.6 g/l concentration favored mycelial growth (27.0 mg) and the concentration of 0.8 g/l brought the maximum production of lipase (58.7 U/ml). The nitrogen source peptone favored the lipase production and enhanced the cell mass of the fungus Fusarium oxysporum 11. Peptone has also shown to support the maximum production of lipase in the case of Aspergillussp 35, Staphylococcus sp. Lp12 21. 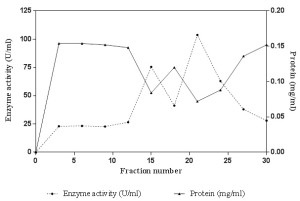 The optimum pH level for lipase of S. variabilis NGP 3 was found to be 8.5; beyond the pH 8.5 the enzyme activity was decreased. However, the enzyme was active in the pH range of 5.0 to 8.0. The specific activity was observed to be 1658.33 U/mg protein (Fig. 2). The optimum temperature for lipase production was 45°C; the enzyme was active in the range of 25 to 40ºC, after that the enzyme activity was decreased which was presented in figure 3. The specific activity was found at the optimum temperature (45ºC) was 1757.81 U/mg protein. According to the previous research, the optimum pH and temperature of the partially purified lipase were 8.0 and 40°C respectively 38 & 39. Lipase from Pseudomonas sp strain S5 was stable at 45°C and pH 6-9 40. 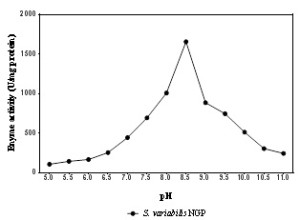 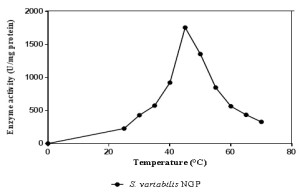 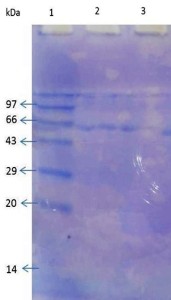 In the earlier study, degradation of oil from automobile effluent by Pseudomonas sp. was the best degrader with the combination of glycerol and inorganic salts. The oil and grease containing wastes were treated with lipase, in that scale the removal of COD was increased and the fat degradation ratio was also decreased rapidly 20, 43.

In the previous report, the biodegradation of slaughter house waste water was carried by lipase producing bacterial species. The degradation studies were continued for 12 days of incubation period for the reduction of BOD and lipid content 25. Similar studies were carried out with the combined culture of P. aeruginosa, B. subtilis and A. calcoaceticus to facilitate the bioremediation process 44. 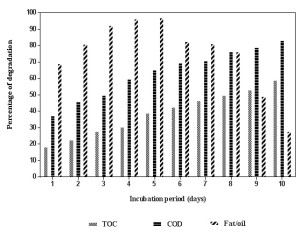 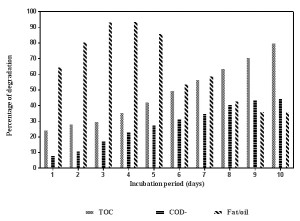 ACKNOWLEDGEMENT:             Authors are thankful to the Chairman, Madam Secretary, Principal of Dr. N. G. P. Arts and Science College, Coimbatore for providing the lab to complete the work successfully.