ABSTRACT: Objective: To assess the pattern of adverse drug reactions (ADRs) in a tertiary care hospital. Materials and methods: This study was conducted in VSS Medical College, Burla, Odisha from October 2012 to September 2014. ADRs collected from various clinical departments were compiled and analyzed for distribution of age, gender, department, drug class and organ system. Assessment of causality, severity, and preventability was done using specific scales. Results: The occurrence of ADRs was more in males compared to females in the age group 19-60 years of age. Most of the ADRs were collected from medicine department followed by dermatology and psychiatry. The skin was the most common organ system affected followed by gastrointestinal and central nervous system. Antiretroviral drugs were the most common drugs causing ADRs followed by antimicrobials and antipsychotics. Skin rashes were the most common reaction followed by vomiting and extrapyramidal symptoms (EPS). Causality assessments of ADRs were probable for 35.71 % and possible for 64.29 %. Most of the ADRs were of moderate severity (47.48 %) followed by mild (45.38%) and severe (7.14%). 59.67% of ADRs were categorized as probably preventable whereas 36.47% were not preventable. Conclusions: Majority of ADRs can be prevented by taking proper action at the early stage. Knowledge about the drugs and predictable adverse drug reactions are the requirement for preventing severe adverse drug reactions at a later stage.

INTRODUCTION: Adverse drug reaction (ADR) is defined as "Any response to a drug which is noxious and unintended and which occurs at doses normally used in man for prophylaxis, diagnosis or therapy of diseases or for the modification of physiological function 1.

ADR is the cause of considerable morbidity and mortality in Europe 2. According to Commission staff document of European communities, approximately 5 % of all hospital admissions are due to ADRs and 5 % of all hospitalized patients develop ADRs during their hospital stay 2. It also constitutes 4th to 6th common cause of death in hospitalized patients 3.

In addition to increasing the duration of hospital stay, ADRs also increase the cost of hospitalization. The overall economic burden of adverse events according to literature ranges from about 0.2% to 6.0% of total health expenditure 4.

The cost for treating a single ADR in US and India is US $ 2500 and Rs. 690 (US $ 15) respectively 5, 6. In the majority of cases, ADRs result due to the extension of the desired pharmacologic effects, substantial variability in pharmacokinetics and pharmacodynamics among patients 7. Various factors responsible for causation of ADRs are a) patient-related factors such as age, gender, body weight with fat distribution, allergy, maternal status, fetal development and creatinine clearance b) social factors like race, ethnicity, alcohol consumption and smoking c) drug-related factors such as polypharmacy, dose and frequency of drugs, off-label use of drugs, self-medication and d) disease-related factors 8 - 10.

With this background, the objective of our study was to detect, analyze and assess various parameters such as causality, severity and preventability of adverse drug reactions occurring in the inpatients as well as the out-patients of a tertiary care hospital in Western Odisha.

MATERIALS AND METHODS: A cross-sectional study was conducted between October 2012 to September 2014 to collect ADRs from various departments of VSS Medical College, Burla, Sambalpur, Odisha. Institutional Ethical Committee (IEC) approval was obtained before undertaking the study. Informed consent was obtained from patients before collecting ADRs for prospective data.

All the data regarding ADR collected in suspected ADR monitoring form (developed by Central Drug Standard Controlling Organization (CDSCO), India) from various departments were analyzed for distribution according to age, gender, department, drug class and organ system affected. Assessment of causality, severity, and preventability were done according to WHO-UMC causality assessment scale 10, Modified Hartwig and Siegel’s severity assessment scale 11 and Modified Schumock and Thronton preventability scale 12 respectively. All the results are expressed in percentage.

As shown in Table 5, skin rash (61) was the commonest ADR encountered followed by vomiting (25), Extrapyramidal symptoms (EPS) (18) and diarrhea (9). The incidence of other ADRs was few and distributed in different body systems. 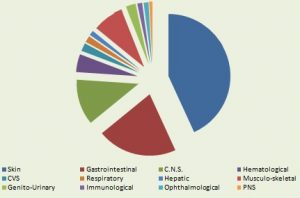 TABLE 4: DISTRIBUTION OF ADRs AMONG DIFFERENT CLASSES OF DRUGS

TABLE 5:  SYSTEMIC INVOLVEMENT DUE TO ADRs

ADRs encountered with the use of different antiretrovirals drugs were highest for nevirapine (9.66%) followed by zidovudine, stavudine and efavirenz. Out of the total 36 antimicrobials related ADRs, amoxicillin (6, 2.52%) and ceftriaxone (5, 2.10%) were found to be responsible for maximum number of ADRs followed by azithromycin, piperacillin, ofloxacin, cefpodoxime, levofloxacin, doxycycline, chloramphenicol, gentamycin, cefotaxime, ornidazole and vancomycin.

Of the total 17 antimalarial induced ADRs, Artesunate-Sulfadoxine-Pyrimethamine revealed highest percentage (8, 3.36%) followed by chloroquine (7, 2.94%) and quinine (2, 0.84%). Out of 15 analgesic-related ADRs, diclofenac was responsible for (7, 2.94%) followed by ibuprofen and paracetamol (each 2, 0.84%). The other NSAIDs involved in the production of ADRs were indomethacin and naproxen, piroxicam, aspirin. (3, 1.26%) out of total six (6) antihypertensive induced ADRs were induced by amlodipine and (1, 0.42%) ADR each by ramipril, enalapril and losartan.

The combination of isoniazid and rifampicin was responsible for (4, 1.68%) ADRs whereas rifampicin and pyrazinamide were the cause for (1, 0.42%) ADR out of total 6 ADRs caused due to anti-tubercular drugs.

Out of 21 ADRs induced by the miscellaneous drug, traditional medicine was found to be more prone to development of ADRs (3, 1.26%) followed by antidiabetic, disease modifying antirheumatic drugs (DMARDs), opioids (2, 0.84%). The other drug classes causing ADRs were corticosteroids, bronchodilator, diuretics as well as antiemetic, antihistamine.

According to WHO-UMC scale, causality assessment for ADRs was probable in (85, 35.71%) cases and possible in (151, 64.29%) cases as shown in Fig. 2. All the causality grades belonged to either probable or possible category. None of the ADR belonged to other categories like Certain, Unlikely Conditional/ Unclassified or Unassessable/ Unclassified. 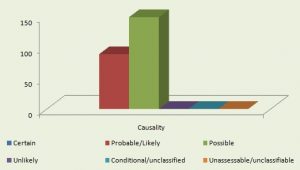 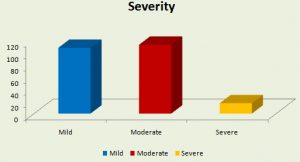 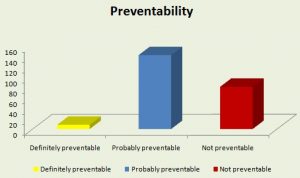 FIG. 4: ASSESSMENT OF PREVENTABILITY OF ADRs

The number of definitely preventable ADRs were highest in anti-malarial (4 cases) followed by NSAIDs (2 cases) and (1 case) in both anti-microbial and anti-epileptic treated group. ADRs belonging to not preventable category were 38 with antiretrovirals, 18 with antimicrobials, 9 cases with anticancer and 4 cases with antipsychotics. The probably preventable ADRs were headed by antipsychotics (32 cases) followed by anticancer (23 cases), antiepileptic (21 cases), antimicrobials (17 cases), antimalarials (11 cases), NSAIDs (10 cases) and antiretrovirals (8 cases).

DISCUSSION: A cross-sectional study was conducted for a period of two years (from October 2012 to September 2014) for detection and analysis of adverse drug reactions occurring in OPD and in-patients of diverse disciplines of a tertiary care hospital in Western Odisha.

ADRs collected from various departments such as medicine, pediatric, dermatology, psychiatry, pulmonary medicine and ART Centre were included in the study. Age wise analysis revealed incidence of ADRs was highest in middle age, between19-60 years of age (78.57%) followed by 0-18 years and more than 60 years (Table 1). Our observation is similar to the study done by Bhandare et al., 14 who also reported the maximum percentage of ADRs between the age 19 - 60 years. Lobo et al. found most of the ADRs in the age group 19-60 years followed by more than 60 and 0 - 18 years 15. This may be due to the increased number of the patient attending the hospital for this age group.

The drug classes observed to produce adverse drug reactions in different patients were diverse in nature and headed by antiretrovirals drugs followed by antipsychotics, antimicrobial, anticancer, antiepileptics, miscellaneous group (consisting of steroid, diuretics, prokinetics, bronchodilators, antihistamines, antidiabetics, DMARDs, IV fluid, opioids), antimalarials, NSAIDs, antihypertensives and antituberculars (Table 4). This finding is in contrast to the studies conducted by Gupta et al., 18 who mentioned antimicrobial-related ADRs as highest percentage whereas in our study it was the second highest ADR. This could be due to proper maintenance of ADR records by ART centre, non-reporting or lack of documentation of ADRs by other departments, narrow therapeutic window of antiretrovirals drugs and also in many cases, patients has to continue the antiretroviral medication in spite of the ADR that may increase the chances of ADR to be detected by physicians.

The most common organ system affected in our study was skin followed by gastrointestinal, CNS, musculoskeletal and hematological as shown in the Fig. 1. This is similar to the finding of the study conducted by Lihite et al., 19 who also reported skin as the most commonly affected organ system.

Causality Assessment (WHO-UMC Criteria): Causality Assessment of ADRs was done by WHO-UMC scale 7. It was chosen over Naranjo algorithm because it is simple, less time-consuming and widely acceptable. Causality assessment of ADRs found in our study revealed that the chance of drug involvement in producing the different ADRs as probable for 85 cases (35.71%) and possible in 153 cases (64.29%) as shown in Fig. 2. None of the ADRs belonged to any other causality category. This finding is similar to the finding of the study conducted by Rehan et al., 17 who also assessed most ADRs as possible (55%) followed by probable (45%). In another study conducted by Harikrishna et al., reported that causality assessment of 66.17 % and 32.35 % of ADRs were probable and possible respectively 21.

Severity Assessment (Modified Hartwig and Siegel Scale): Severity assessment of ADRs was done by Modified Hartwig and Siegel scale 8. Most of the ADRs were assessed as moderate severity followed by mild and severe as shown in Fig. 3. The finding is similar to the observation of the study conducted by Sivasakthi et al., 22 who also assessed most of the ADRs as moderate followed by mild and severe. The severity assessment in our study revealed, antiepileptics were responsible for most cases of severe ADRs followed by antimalarials, antimicrobials, antipsychotics, antiretrovirals drugs.

ACKNOWLEDGEMENT: We are thankful to our pharmacovigilance associate Mr. Pravat and the physicians who have helped for the collection of adverse drug reactions throughout the study period.