Poorly solubility in water of many newly developed high-potential drugs is an obstacle in formulation development. The aim of this study was to increase the solubility of Lamotrigine which is a poorly soluble drug and comes under BCS class-II by using solid dispersion technique. Lamotrigine, PEG 4000 and PVPK-30 solid dispersion was prepared by solvent evaporation method and the formulation was characterized using stability studies, Fourier transform infrared spectroscopy (FTIR) and physical parameters. After checking the preformulation studies and getting satisfactory results pellets were formulated and evaluation was done. Drug entrapment efficiency was more than 98 % which indicates that the pellets formed are good possessing in vitro release of 94.89 & 92.30 % for X1 & X2 batches respectively.

INTRODUCTION: Poorly water-soluble drugs are increasingly becoming a problem in terms of obtaining the satisfactory dissolution within the gastrointestinal tract that is necessary for good bioavailability. It is not only existing drugs that cause problems but it is the challenge of medicinal chemists to ensure that new drugs are not only active pharmacologically but have enough solubility to ensure fast enough dissolution at the site of administration, often gastrointestinal tract 1.

It is estimated that 40% or more of new chemical entities (NCEs) being identified through combinatorial screening programs are poorly soluble in water, which is a critical determinant of oral bioavailability and solubility of many newly developed high-potential drugs is an obstacle in formulation development, in addition Biopharmaceutical Classification System (BCS) highlights dissolution as the rate-limiting step for oral absorption of class II and IV drugs 2.

Solubilization techniques include addition of a cosolvent, salt formation, prodrug design, complexation, particle size reduction, and the use of surface active agents, use of solvate and hydrates, polymorphs, hydrotrophy ,use of absorbents ,pH adjustment, solubilizing vehicles, etc. are the some other physico-chemical approaches to enhancing oral absorption of poorly water soluble drugs 1.

Solid dispersion technology is the science of dispersing one or more active ingredients in an inert matrix in the solid stage in order to achieve increased dissolution rate, sustained release of drugs, altered solid state properties, and enhanced release of drugs1.Solid dispersions (SDs) traditionally have been used as an effective method to improve the dissolution properties and bioavailability of poorly water-soluble drugs 3.

Lamotrigine is an antiepileptic drug which comes under BCS class II and causes lot of solubility problems. In order to increase the solubility of the drug solid dispersion was employed by using two polymers PEG 4000 and PVPK 30 and evaluation of solid dispersion mixture and pellets were formulated after getting satisfactory results.

Solvent Evaporation Method: The required amount of Lamotrigine and polymer and additives were dissolved in sufficient volume of methanol with continuous stirring. The solvent was then completely evaporated at 45oC with continuous stirring to obtain dry mass. The dried mass was pulverized passed through 44 mesh sieve and stored in desiccator until used for further studies.

TABLE 1: FACTOR & LEVELS IN THE DESIGN OF LAMOTRIGINE SOILD DISPERSIONS WITH TWO POLYMERS

Physical Appearance: The two batches of Lamotrigine solid dispersions were evaluated for color and appearance.

Flow properties: The flow properties of both solid dispersions (1:2:2) and (1:4:8) were checked by carrying out determining Carr’s index and Angle of repose.

Preparation of pellets by orifice ionic gelation technique: Method used for preparation of pellets was orifice ionic gelation technique in which 5% sodium alginate solution was prepared in 50 ml water and 2% solid dispersion was added to the solution, then, separately prepared 10% calcium chloride solution (100 ml). To this solution added dispersed solution drop by drop by continuous stirring at less than 300 rpm. They are then oven dried for 6 hr at 60°C

Loose Surface Crystal Study (LSC): This study was conducted to estimate the amount of drug present on the surface of the micropellets which may show immediate release in the dissolution media. 100mg of micropellets (# 22 sizes) were suspended in 100ml of phosphate buffer (pH 6.8), simulating the dissolution media. The samples were shaken vigorously for 15 min in a mechanical shaker. The amount of drug leached out from the surface was analyzed spectrophotometrically at 308nm. Percentage of drug released with respect to entrapped drug in the sample was recorded.

Determination of Drug Entrapment Efficiency: About 100mg of micropellets (# 22 sizes) were accurately weighed and dissolved in 25ml of Phosphate buffer (pH 7.4) for overnight and an aliquot from the filtrate was analyzed spectrophotometrically, after suitable dilution, using Perkin Elmer, at 308 nm. Reliability of the method was judged by conducting recovery analysis using known amount of drug with or without polymer. Recovery averaged 98.59± 0.50%. Drug content of every batch was determined for every size range of micropellets and the mean ± SD was calculated. Drug Entrapment Efficiency (DEE) was calculated according to the formula;

Disintegration Studies: Disintegration studies were performed in 0.1N HCl and simulated intestinal fluid in a rotating bottle apparatus. 5 pellets per vial were kept in 50 ml medium at 37°C and the vials were rotated at 25 rpm. The measured disintegration time was the time taken by the pellets to disintegrate into crystals, the polysaccharide being soluble and the drug insoluble in the disintegrating fluid.

In vitro Dissolution Study: The USP Dissolution apparatus I (Electrolab) was used to study drug release from the micropellets. The dissolution parameters [ 100mg pellets ; 37± 2°C ; 100 rpm ; 1000ml of USP pH 1.2; n=3; coefficient of variation < 0.05] were maintained for two batches. 2ml of aliquot were withdrawn at specified intervals and after suitable dilution assayed by Perkin Elmer spectrophotometer at 308 nm.

FT-IR Studies: The Fourier Transform-Infra Red spectra (Fig. 1 to 10) of Lamotrigine, lactose, MCC, PEG 4000, PVPK30,solvent evaporation method (1:2:2),solvent evaporation method (1:4:8),sodium alginate, calcium chloride and Lamotrigine + sodium alginate + calcium chloride are given below and they show the characteristic peaks of individual Lamotrigine ,excipients and their mixture. The spectra showed no extra peaks. This is an indication that there is no interaction between Lamotrigine, excipients and their mixture. 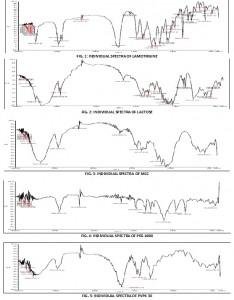 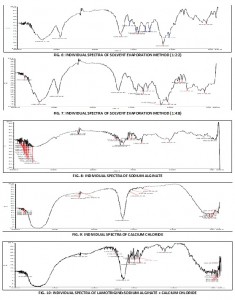 Evaluation parameters of pellets: Drug entrapment efficiency of both the batches was good as shown in table 3. Loose surface crystal (LSC) study was an important parameter giving an indication of the amount of drug on the surface of the pellets without proper entrapment. With the increase in the copolymer concentration % LSC decreased significantly owing to high entrapment of drug in the dense network of polymers. As the drug was entrapped properly % LSC was less.

Low moisture content in all the pellets indicates the effectiveness of the optimized drying condition. Low moisture level ensures better stability of the drug in the pellets.

In-vitro release studies: Drug release studies were carried out in gastric fluid, i.e., SGF. The drug release profiles were presented by plotting the amount of Lamotrigine released against time. Table 4; figure 11 shows the results of release test of alginate-based pellets. Lamotrigine was released more rapidly and the release was more than (90%) within 30 min. 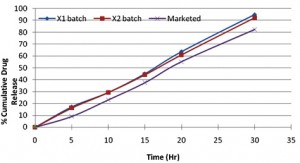 CONCLUSION: Solid dispersion technique increased the solubility of Lamotrigine was seen in vitro dissolution studies and also the use of two polymers increased the solubility of Lamotrigine. The flow property of solid dispersion was good so that it be can be easily formulated. The FTIR studies and stability studies indicated that there was no interaction between drug and the excipient.

The orifice ionotropic gelation technique employed for the preparation of pellets was simple, reproducible and produces beads of regular shape and size. The prepared beads were spherical in shape and discrete.

In vitro release studies also shown more than 90% of the drug was released in 30mins which indicates that sodium alginate helps in release of the drug from the pellets.