ABSTRACT: The present work offers a review addressing the detailed chemistry and pharmacology of Peltophorum pterocarpum (belonging to Fabaceae family) regarded as one of the most significant plant species in traditional system of medicine. The plant is used in different parts of the world for the treatment of several ailments like stomatitis, insomnia, skin troubles, constipation, ringworm, insomnia, dysentery, muscular pains, sores, and skin disorders and is the source of a diverse kind of chemical constituents such as aliphatic alcohols, fatty acids, amino acids, terpenoids, phenolics, flavonoids, alkaloids, steroids etc. The isolated phytochemicals as well as different extracts exhibited numerous biological activities including antimicrobial, antioxidant, cytotoxic, aldose reductase inhibition and antiglycaemic activities. Hence, up to-date information on the chemical and pharmacological knowledge on this plant may be helpful to guide researchers anticipating to undertake further investigations in these directions. The present review covers literature up to middle of 2013 and enlists 42 references.

INTRODUCTION:Peltophorum pterocarpum (Copperpod, Golden Flamboyant, Yellow Flamboyant, Yellow Flame Tree, Yellow Poinciana and Radhachura in Bangla; Synonyms: Peltophorum inermis and Peltophorum ferrugineum) is a family of Fabaceae native to tropical southeastern Asia and a popularly ornamental tree grown around the world. It is a deciduous tree growing to 15–25 m (rarely up to 50 m) tall, with a trunk diameter of up to 1 m.

The plant is native to tropical southeastern Asia and northern Australasia, in Sri Lanka, Thailand, Vietnam, Indonesia, Malaysia, Papua New Guinea, Philippines and the islands of the coast of Northern Territory, Australia 1,3. The plant is also found in different regions of India including Birbhum District, West Bengal. The wood of the plant is wide variety of uses, including cabinet-making 4 and the foliage is used as a fodder crop 1.

The taxonomical classification of Peltophorum pterocarpum is shown below:

Peltophorum pterocarpum (DC.) Baker ex Heyne is a deciduous tree commonly used for ornamental purpose and as an avenue tree. Different parts of this tree are used to treat many diseases like stomatitis, insomnia, skin troubles, constipation, ringworm and its flower extract is known to be a good sleep inducer and used in insomnia treatment 5-7. Its bark is used as medicine for dysentery, as eye lotion, embrocation for pains and sores. The traditional healers use the leaves in the form of decoction for treating skin disorders. Stem infusion of Peltophorum pterocarpum Baker ex K. Heyne used in dysentery, for gargles, tooth powder and muscular pain 8. Flowers are used as an astringent to cure or relieve intestinal disorders after pain at childbirth, sprains, bruises and swelling or as a lotion for eye troubles, muscular pains and sores 9. 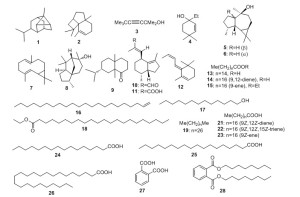 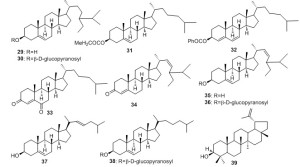 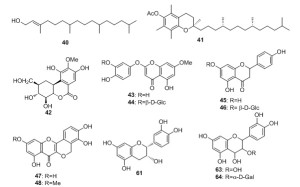 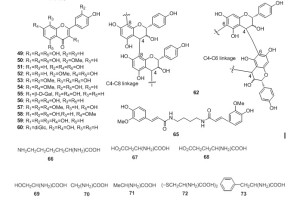 Bergenin (42), isolated from methanol fraction of P. pterocarpum flowers, is found to show antifungal activity against Trichophyton mentagrophytes, Epidermophyton floccosum, Trichophyton rubrum, Aspergillus niger  and Botrytis cinerea  having MIC value of 250, 500, 500 & 250 µg/mL, respectively. However, this compound (42) was unable to show any antibacterial activity 14.

Maximum antimicrobial inhibition was demonstrated by ethyl acetate extract against B. subtilis, Pseudomonas aeruginosa and S. aureus having MIC of 31.25, 31.25 and 125 μg/mL, respectively 8. Flower extract at a dose of 200 μg/disc of the plant was found to show antimicrobial activity against a number of Gram-positive and Gram-negative bacteria 13. The highest zone of inhibition was found against E. coli and B. subtilis (18 ± 0.02 and 18 ± 0.11 mm, respectively), followed by Bacillus megatherium and Shigella boydii (zone of inhibition of both 15 and 17 mm, respectively) whereas the moderate activity was shown against Pseudomonas aeruginosa, Shigella flexneri, Bacillus cereus and Bacillus anthracis 13.

Ethanolic extract of the plant shows high bactereostatic and bactericidal activities as investigated by a research group 30. Vadlapudi reported 31 that methanol extract of the plant (whole plants) at a concentration of 100 mg/mL exhibited promising antimicrobial activity against a number of plant pathogens such as A. alternate, A. flavus, R. solani and X. compestries with zone of inhibition value 22, 15, 15 and 20 mm, respectively measured in agar well disc diffusion technique 31.

On the other hand, ethyl acetate extract was found to show appreciable antifungal activity against T. rubrum and P. crysogenum having equal zone of inhabitation value of 15 mm 32. A research group 33 suggested that ethanol and ethyl acetate extracts of P. pterocarpum can be used as herbal medicines in the control of E. coli and S. aureus induced medical diseases based on their investigation on antibacterial activity of organic extracts of the plant against such bacteria. The investigators also reported that organic extracts are also effective against the fungus, C. albicans 33.

Organic extracts of P. pterocarpum flowers and shoots in the concentration range of 1.25 to 2.5 mg/mL were reported to exhibit antibacterial activity against a number of Gram-positive and Gram-negative bacteria 34. The investigators also pointed out that flower part showed greater efficacy than shoot part and ethyl alcohol extract exhibited highest activity than the other extracts.

These experimental results get nice correlation with a previous investigation 30 where antimicrobial activity of methanol extract of P. pterocarpum flowers was found against B. subtilis, S. aureus, S. epidermidis, E. faecalis, E. coli, P. aeruginosa, K. pneumoniae, P. vulgaris, and C. albicans at the concentration of 5 mg/mL. Lam & Ng 26 isolated an amidase, peltopterin, from P. pterocarpum seeds and found its antifungal activity against Rhizotonia solani in the pH range 0–14 and temperature range of 25–100°C 26. This amidase impeded mycelial growth of this fungus with an IC50 of 0.65 μM.

The extract is also found to reduce AChE activity, serum biochemical parameter glucose, total cholesterol and reverse in the degenerative changes in the histopathological study of the rat brain and the increased activity of lipid peroxidation. Furthermore, the extract is found to increase activity of brain antioxidant enzymes such as catalase, super oxide dismutase, glutathione of the tested animal 36.

It was reported 20 that both the leaf and bark extract (ethanol and aqueous) exhibited lipid peroxidation inhibition activity; the ethanolic extract displayed 1.5-fold and aqueous extract 1.8-fold higher inhibition activity compared to the commercial grape seed extract. The presence of flavonoids in these plant parts may be responsible for exhibiting this activity 20.

They are in opinion that the high content of tannins in bark may be responsible for this activity due to its non-specific absorption of proteins 20.

A research group 37 reported that methanol: ethyl acetate (1:9) of root extract of P. pterocarpum which includesdifferent types of compounds including flavonoids and steroids has significant activity in lowering fasting blood glucose level in alloxan and glucose induced diabetic mice.

Ethanolic extracts of P. pterocarpum leaf and bark were found to be 28-fold and 56-fold more effective, respectively, in inhibiting aldose reductase activity compared to quercetin. Therefore, the plant may be used effectively in hyperglycemia management 20.

Taiwo et al 40  investigated cholinesterase inhibitory activity of methanolic extract of the leaves, root bark and stem bark of P. pterocarpum  using eserin as reference and found that stem-bark gave the highest activity (68.85±3.53%) and better selectivity towards acetylcholinesterase (AChE) at a dose of 42.5 μg/mL followed by the root bark which inhibited both AChE and butyrylcholinesterase (BuChE) with inhibition percentage of 48.46±4.47 and 51.77±2.20, respectively and then the leaves (inhibition values of 47.50±2.41 and 48.91±0.71%, respectively).

The investigators also concluded that the plant may be used for the treatment of memory dysfunctions and neurodegenerative disorders such as Alzheimer’s disease 40. A research group 41 investigated anti-proliferative activity on HeLa cancer cell line of the aqueous extract of the plant by SRB assay and found significant activity compared to standard anticancer drug cis-platin. Biswas et al 42 reported that 70% ethanolic extract of P. pterocarpum leaves may have the potential therapeutic value in the treatment of paracetamol induced hepatic damage and some liver diseases of wister albino rats. They found that this extract at 100 mg/Kg and 200 mg/Kg doses significantly reduced the elevated levels (after administration of Paracetamol) of biochemical markers like SGPT, SGOT, ALP, bilirubin (total and direct), total cholesterol, triglycerides and depleted tissue GSH 42.

CONCLUDING REMARKS: The present article deals with an up-to-date review on the chemistry and pharmacology of Peltophorum pterocarpum, a useful medicinal plant from Fabaceae family finding applications in indigenous systems of medicine. The plant is used in different parts of the world for the treatment of stomatitis, insomnia, skin troubles, constipation, ringworm, insomnia, dysentery, muscular pains, sores, and skin disorders. Different class of chemical constituents including aliphatic alcohol, fatty acids, amino acids, terpenoids, phenolics, flavonoids, alkaloids, steroids are reported to be present in this plant.

The isolated phytochemicals as well as different extracts of the plant exhibited numerous biological activities. Hence, up-to-date information on the chemical and pharmacological knowledge on this plant may be helpful to guide researchers anticipating to undertake further investigations on this plant and we do anticipate that the present overview would boost the on-going development in this direction.

ACKNOWLEDGEMENTS: The authors are thankful to the Chemistry Department, Kulti College (Affiliated to The University of Burdwan) for providing infrastructural facilities. Financial support from the UGC (ER), Kolkata is also deeply acknowledged.