ABSTRACT:  Topical NSAIDs do not effectively cross the skin due to barrier of stratum corneum. The aim of the study was to evaluate penetration of diclofenac from a novel quick penetrating solution (QPS) and conventional gel prepared using Tc-99 m labeled diclofenac. The study was conducted in 16 healthy subjects, divided in 4 groups, each with 4 subjects. In first three groups, the applications were made on knees for 30, 60 and 120 minutes respectively. In fourth group, applications were made at six sites (three on either side of the spine) on the back. Equal quantity of diclofenac from QPS and gel were applied on left and right knee and left and right side of the spine respectively. Measurement of radioactivity was done by gamma camera after washing of the applied drug. It was found that the penetration of radiolabeled diclofenac increased with increase in application time for both the QPS and gel formulations. Scintigraphy images indicated site specific differences in the rate and extent of penetration. Over knee, the penetration of diclofenac from QPS was significantly higher as compared to gel after application for 30 min (P<0.0001) and 120 min (P = 0.03). Over   back, the difference in the % retention was significant (P = 0.03) after 60 min of drug application. Thus, it may be concluded that both rate and extent of diclofenac penetration from skin over knee and back from QPS was higher than gel.

INTRODUCTION: Non-Steroidal Anti-Inflammatory drugs (NSAIDs) are cornerstone for musculoskeletal pain management.1 Oral NSAIDs carry risk of gastrointestinal, cardiovascular, renal, hematological and other systemic adverse events particularly when used for long duration. Topical diclofenac can avoid adverse events associated with oral diclofenac by limiting systemic exposure of diclofenac and acting locally with less systemic absorption.2 There is limited published data on the skin permeation of diclofenac and majority of the studies are performed in vitro.3

Currently available topical formulations of diclofenac include creams, gels or aerosol sprays. To provide adequate analgesic effect, topically applied drugs should cross the barrier of stratum corneum to reach the underlying tissue.4 It is reported that only 10% of diclofenac from the topically applied gel is biologically available.5 A meta-analysis of 25 randomized clinical trials shows no benefit of topical NSAIDs over placebo at four weeks in treatment of osteoarthritis 6.

This prospective, open label, comparative scintigraphy study was conducted at Department of Nuclear Medicine, Institute of Nuclear Medicine and Allied Sciences (lNMAS), Delhi, India. The study was initiated after approval by the Independent Ethics Committee. The study was conducted in accordance with the Good Clinical Practice (GCP) guidelines issued by the Central Drugs Standard Control Organization (CDSCO) India; the ethical standards laid down in declaration of Helsinki 1964 and its later amendments and the Ethical guidelines for biomedical research on human participants issued by Indian Council of Medical Research (2006), New Delhi.

Diclofenac diethylamine (DEA) was labelled with Technetium-99m (Tc-99m) in dry form (by Dry Powder labelling protocol developed by INMAS). Stability of the radio labelled DEA was confirmed in-vitro. The radiolabelling efficiency of the process was more than 95%. Radiolabeled DEA was used to prepare QPS and gel formulations freshly on the day of the study.

All subjects were explained the procedure and written informed consent was obtained before the screening procedure. 16 healthy adult male subjects aged 18 to 55 years, without any sign of abrasion, wound or infection on the skin over knee and back and with normal clinical examination, laboratory examinations and vital signs were included in the study. Any subject with known hypersensitivity to Diclofenac or medical history of significant dermatological diseases or conditions known to alter skin appearance or physiologic response or any other systemic illness in past 3 months, history of asthma, gastric or duodenal ulcer, abnormal liver or renal function tests were excluded.

The subjects were divided in 4 groups with 4 subjects in each group. The first three groups were named as K1, K2, K3 (knee skin) and fourth group was named as group B (back skin) (Fig. 1). 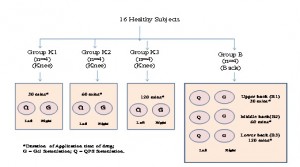 All 16 subjects completed the study and data was subjected to statistical analysis. The formulations were applied on the knee and back as shown in Fig. 2 and 3. These figures depict gamma camera images superimposed in the body outline and show the site and area of drug application.

FIG.3: SCINTIGRAPHIC IMAGES OF BACK IMMEDIATELY AFTER WASHING (GROUPS B1, B2, B3: 30, 60, AND 120 MINUTES OF APPLICATION RESPECTIVELY)

The diclofenac penetrated through the skin at the knee from both QPS and gel formulations. Fig.4 and Table 1 depicts % radioactivity of diclofenac at the site of application in group K1, K2 and K3 at different time points. The radioactive density of diclofenac, at skin over knee, was increased with increase in application time for both the QPS formulation and gel formulation. The penetration of radiolabeled diclofenac, on the skin over knee from QPS formulation was higher than gel formulation for images taken at all time points, post wash, in K1, K2 and K3 groups. It was statistically significant as compared to gel formulation in group K1 (P<0.0001) and group K3 (P = 0.03).  The levels declined with time in all groups. The parallel lines in the Fig.4 suggest that the apparent rate of disappearance of radioactivity was similar in all the groups. 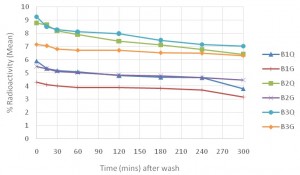 TABLE 1: PERCENTAGE OF PENETRATION AND RETENTION OF DICLOFENAC AT KNEE IN GROUP K1, K2 AND K3

Penetration at Back: The diclofenac penetrated through the skin at the back from both QPS and gel formulations. Fig.5 and Table 2 depicts % radioactivity of diclofenac at the site of application in group B1, B2 and B3 at different time points. The radioactive density of diclofenac, at skin over back, increased with increase in application time for both the QPS formulation and gel formulation. The penetration of radiolabeled diclofenac, on the skin over back from QPS formulation was higher than gel formulation for images taken, post wash, at all time points in B1, B2 and B3 groups. It was statistically significant in group B2(P=0.03). The levels declined with time in all groups. The parallel lines in the figure suggest that the apparent rate of disappearance of radioactivity was similar in all the groups. 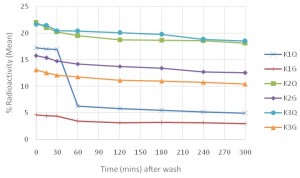 TABLE 2: PERCENTAGE OF PENETRATION AND RETENTION OF DICLOFENAC AT BACK IN GROUP B1, B2 AND B3

Values are expressed as Mean± SD. Data were analysed by unpaired t test. N= number of subject in each group.

None of the subject had any adverse event during the entire study period.

DISCUSSION: Knee osteoarthritis (OA) and backache are among the most common ailments of musculoskeletal diseases. Moreover these two sites are adjacent to the skin and can be treated with topical application of NSAIDs. Currently available topical formulations of NSAIDs reported to have poor penetration through stratum corneum.3 Recently published study shows that even formulations containing nano-sized particles, don’t penetrate the skin.8

Results from this study suggest that penetration of diclofenac increased with increase in duration of application with both formulations; this suggests that for adequate effect topically applied drugs should be allowed to stay for sufficient time. However, the penetrability of the drug is dependent on the type of formulation as well as thickness and texture of the stratum corneum at the site of application as reflected by the relative positions of plots of QPS and Gel in Fig. 4 and 5.

Radioactivity at application site disappeared gradually after washing till the last measured time point (5 hrs). The apparent rate of loss of radioactivity was similar at both sites and from both the formulations. Parallel lines in the figures suggest that formulation or the site of application has no effect on disposition of diclofenac. In K1 group, the radioactivity levels from QPS formulation at 300 minutes were still higher than the observed at 0 min with gel formulation. Similar observations were made in group B2 for QPS and gel formulations. This may translate in to faster pain relief for longer duration with QPS formulation. This can be explained by initial high tissue levels achieved by QPS formulation. This finding also suggests that over back skin, more time is required than over knee skin for adequate penetration. This information can be useful in deciding time duration of application in future studies.

In this study, no local or systemic adverse event was observed or reported during study period in any of the study groups. Safety results of our study were in line with earlier published studies which reported that the topical formulations of diclofenac are safe and do not have significant systemic side effects.9, 10

In this study, images were taken from anterior and posterior direction only and the images could not define the depth of the penetration of diclofenac through the skin. Dermal Microdialysis study conducted with the same formulation confirmed the enhanced transdermal penetration with QPS formulation.11

This study enrolled healthy volunteers and so any effect of drug on the underlying disease could not be assessed. Clinical trial conducted in patients suffering from pain due to acute musculoskeletal conditions with the QPS formulation concluded that QPS provides better pain relief as compared to gel.12

This scintigraphy study suggests significant penetration (faster and higher penetration) of diclofenac from QPS through the skin of knee. The results of this study suggest that the topical formulation with enhanced penetration can be useful in treating musculoskeletal and joint diseases adjacent to the skin. We recommend conducting clinical trial in patients suffering from OA knee to evaluate the clinical efficacy of QPS whether its increased penetration can provide better pain relief or can reduce the need of oral NSAIDs.

ACKNOWLEDGEMENT: This study was sponsored by Troikaa Pharmaceuticals Ltd., India.