ABSTRACT: Hepatitis C is a liver disease caused by the hepatitis C virus. Acute HCV infection is usually asymptomatic and is only very rarely associated with life threatening disease. About 15-45% of infected persons spontaneously clear the virus within 6 months of infection without any treatment, whereas remaining 55-85 % were develop chronic HCV infection and risk of cirrhosis occur. A prospective, observational study will be conducted in patients attending inpatient and outpatient department at Guru Gobind Singh Medical College and Hospital, Faridkot, Punjab. The proposed study will find out the percentage of patient eligibility for antiviral therapy according to child pugh score in hepatitis “c” virus (HCV) positive patients. The study will help to find out the   percentage of the patient eligible for the antiviral therapy according to the child pugh score and to determine the affordability of antiviral therapy because many of these drugs have frequent side effects and a high cost, so that usually only a proportion of patients is eligible for treatment. Hence this study determine the number of patients that are able to take antiviral therapy according to their cost as well as their eligibility according to child pugh score.

INTRODUCTION: Hepatitis C Virus is the major public problem in all over the world. Many countries are infected by this disease and these diseases become the burden all over the world 1. The prevalence of HCV in Canada is decreasing, but cases of liver disease and health care cost increased 2. Chronic liver disease and cirrhosis mainly cause chronic hepatitis C and the most common indication for liver transplantation in the United States (U.S.), Australia and most of Europe 3 - 5. Approximately 170 million people are affected with HCV worldwide and it comprising approximate 3% of the global population 6.

Hepatitis C virus (HCV) is the most common chronic infection in the U.S. and is involved in 40% of chronic liver disease 6, 7. It is difficult to diagnose hepatitis C because it is asymptomatic in early stages of disease. Fatigue, nausea, jaundice, pain over the right upper part, fever and various other symptoms that not explained properly so they need medical advice 8.

Most patients with acute HCV infection do not have a distinct symptomatic illness and most are not aware of their recent exposure to hepatitis C 9 - 11. Different scores are used to diagnose the liver disease or the stage of disease like Child-Pugh score, Model for end stage liver disease (MELD), Monoethylglycinexylidine (MEGX) and Von Willebrand Factor (vWF) 8. Child Pugh score (CPS) has been used from the last 40 years for assessing the prognosis of cirrhosis. CPS classification is the most widely applied and reported system as it is used at the bedside 12.

It includes the presence and absence or the severity of ascites, encephalopathy and change in the INR ratio, level of albumin and bilirubin. Points range from 5 to 15 and on the basis of these points the patients are arranged into three child classes. In child A it ranges from 5 to 6, in child B it range from 7 to 9 and in child C it ranges from > 9. Hence it is divided as low, intermediate and poor risk patient. CPS has been proved over many years in studies but recently it has been challenged because of encephalopathy and ascites are subjective variables with interobserver variance. As well as the maximum effect of the CPS score various studies demonstrated that CPS is predictive tool in assessing the patient with liver disease and each of the 5 clinical variables of individual and their classification had prognostic significance 13. CPS includes 5 Clinical parameters which measure the severity of liver disease. It was invented by Dr. C.G. Child and Dr. J.G. turcotte of the University of Michigan in 1964 and was modified in 1972.

The child Pugh Score parameters and their grading are mentioned in Table 1.

The scores are added up and then classified as according to their class and are mentioned in Table 2.

TABLE 2: POINT SCORES ARE THEN ADDED UP AND CLASSIFIED AS 14

PATIENTS AND METHODS: This prospective observational study was conducted, at department of medicine and surgery in Guru Gobind Singh Medical College, Hospital and Research Centre, Faridkot, Punjab. Hospital has 100 bedded, general medicine departments, in patient department. Hospitals have all departments with well qualified medical and paramedical staff. Study was carried out for a period of 6 months (November, 2015 to May 2016). The records of all eligible subjects according to inclusion criteria, age above 18 and all HCV diagnosed patient, admitted from November 2015 to May 2016. The patients below 18 were excluded.

Clinical Evaluation: The available data were analysed to obtain information on history, physical

Clinical Presentation Group: After complete evaluation of HCV positive patients were categorized into one of the three Child Pugh Score class that was depend upon their disease severity condition.

Patients: A total of 110 cases of Hepatitis C virus (HCV) were enrolled during the study period of 6 months. 10 cases were withdrawn from the study due to unavailability of medical records and far off residence. Hence 100 cases were included in the study and the data was analyzed.

Child Pugh Scoring: The patient under Child Pugh Score class A was 49, class B was 43, class C was 8 is listed in Table 4. The graphical presentation of Child Pugh Scoring is done in Fig. 1. Patient with class A have compensated cirrhosis and mild hepatic impairment. The patients under Class B and C have decompensated cirrhosis if they have moderate or severe liver disease. Hence the patients under class A are eligible to therapy and class B and C are not eligible the only option for them are liver transplantation for long term survival. But the under class A, B and C either compensated and decompensated liver cirrhosis are eligible to therapy for short term survival. 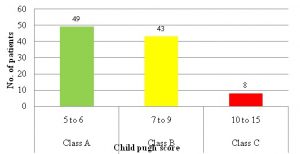 FIG. 1: CLASSIFICATION OF PATIENTS ACCORDING TO CHILD PUGH SCORE 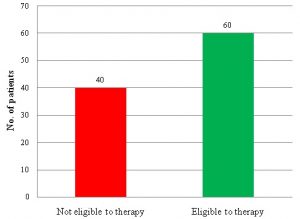 Affordabilty: In the study 100 patients with detectable HCV out of which 10% were affordable to antiviral therapy while 6% of patients were on local medication (i.e. in Punjab it is called as desi medication) and the remaining 84% was not affordable because it was costly and unaffordable to them. This data is listed in Table 6. The graphical presentation for affordability of patient to antiviral therapy is in Fig. 3.

DISCUSSION: The study was conducted in Punjab (India). The prevalence of hepatitis in Punjab is more as compare to other regions of India, due to advanced disease stage and loss of follow up in medication as well as cure related to HCV comorbidity like liver transplantation. Our study showed that of 100 patients of HCV who presented to our department from November, 2015 to May, 2016. Only 49% were eligible for antiviral treatment for long term therapy (i.e. under child A class). In majorly ascites were present in 40% of patients and only 2% of patients had hepatoencephalopathy 15. In a community-based epidemiologic study, which was carried out in a district in West Bengal, of 3,579 individuals screened, 0.87% were HCV antibody positive 16.

As compared to West Bengal, in states of Punjab and Haryana the prevalence of HCV seems to be much higher. In a study done by Sood et al., 17. Prevalence rate of HCV infection in Mullanpur (district Ludhiana of Punjab) was found to be 5.2% of 5,258 subjects screened door to door. This prevalence rate is possibly the highest in South Asia. A very limited data is obtained from other countries. Although the prevalence of HCV infection in Indian population is lower than that reported from industrialized countries of the west, the total reservoir of infection is significant.

The World Health Organization (WHO) estimates that approximately 12 million Indians are suffering from HCV (while the prevalence in the US is just 2 to 4 million and in Europe is 5 to 10 million). This calls for urgent public health measures including health education to limit the magnitude of the problem 18. In our study we showed that by the time patients of HCV present to hospital and are late for antiviral therapy. The reason for this late presentation is that most HCV patients in the early stage (chronic hepatitis stage) either have no symptoms or have only very mild non-specific symptoms. In a community study from Haryana on 1,630 cases of HCV. Only fatigue was the most common symptoms present in 69% of patients, followed by abdominal pain in 47%.

Symptoms like malaise and body ache are found among 14% of patients in this study 19. In community, till very late stage of disease, these non -specific symptoms were treated symptomatically and blood tests were usually not carried out. Even if biochemical investigations are done, they were usually normal 18. In spite of mild or no symptoms and normal or near normal biochemistry, these patients were infective, even though they do not know they were infected and have a potential to spread the disease to others. These asymptomatic individuals comprise of a large reservoir of HCV carriers, who can act as a pool for its continuous transmission 20.

As no protective vaccine is available and as the treatment is costly, lengthy, with a poor success rate, screening of healthy population remains the only means of primary prevention of HCV transmission 21. Routine blood screening for Hepatitis C infection should be mandatorily carried out in all hospitals. The only method to control the HCV pandemic is prevention of HCV transmission and early treatment of those infected. Since, there is no hepatitis C vaccine available as yet; the only other preventive method is safe healthcare practices. Unsafe therapeutic injections and transfusion of unsafe blood are the predominant mode of transmission of HCV in India 15.

Unsafe therapeutic injections include contaminated multi dose vials and saline bags from reinsertions of used needles and syringes, use of single needle or syringe to administer intravenous medication to multiple patients and also due to the use of spring loaded finger stick devices without changing the platform to monitor blood sugar levels in multiples patients 22. Hence, to reduce the burden of HCV infection and to decrease the incidence of HCV infection, healthcare workers should play an important role 23.

The safe injection practices should be followed meticulously. These include the use of aseptic technique for injection equipment, not to administer medication from same syringe to multiple patients, use of fluid infusion and administration sets for one patient only 24. The natural history of HCV shows that the majority of patients may become chronically infected and will not spontaneously resolve the infection. About 30% of chronically infected patients will evolve to cirrhosis within 20 to 30 years 25 with an increased risk of hepatic decompensation and HCC. The goal of HCV treatment is to eradicate the virus and prevent the complications of chronic liver disease.

The standard-of-care for HCV, till recently, has been combination therapy with Peg-IFNα and RBV. Only a proportion of HCV patients are eligible for interferon-based antiviral therapy, and our study has showed that in India, most patients are already ineligible by the time they present.

The latest guidelines from American Association for the Study of Liver Diseases (AASLD) and European Association for the Study of Liver (EASL) in 2015 and 2016 have now incorporated Direct Acting Anti viral agents (DAAs) in the management of patients with HCV 26. There were a few limitations in our study. First, this being a retrospective study, it has all the limitations of retrospective studies like missing data and incomplete records. However, we have utilized the accepted imputation method to make up for the missing data 27. Second limitation is that our center being a tertiary care hospital without liver transplant facility. We accept this limitation hence the title of our study reflects that this data is from a tertiary care hospital therefore it is a major limitation the study.

Therefore HCV is usually asymptomatic at treatable stage so proper awareness about the disease and its prevention should be done to increase the quality of life of patients. We also hope that availability of antiviral for HCV at affordable price in India so that every patient considers being get benefit from antiviral drugs. The disease pyramid of patient’s eligibility and affordability to antiviral therapy is given in Fig. 4. 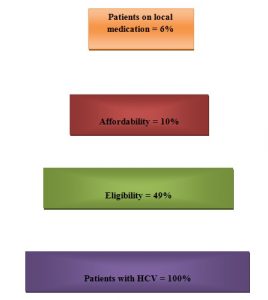 CONFLICTS OF INTEREST: All the authors have none to declare.