Pioglitazone Hcl is commonly prescribed drug for the treatment of patient with type II diabetes mellitus. It modulates the transcription of the insulin-sensitive genes which involved in the control metabolism of glucose and lipid in the lipidic, muscular tissues and in the liver. The mean serum half-life of Pioglitazone Hcl and total Pioglitazone Hcl ranges from 3 to 7 hr and 16 to 24 hr, respectively. Pioglitazone Hcl has an apparent clearance, calculated to be 5 to 7 L/hr and hence was used as core in transdermal matrix patches for controlled release of drug.

MATERIALS AND METHODS: Pioglitazone Hcl was obtained as a gift sample from Concept Pharmaceuticals, Aurangabad. Ficus carica fruit were obtained from the main market of Sangamner town and authenticated by the Department of pharmaceutics, AVCOP, Sangamner. Glycerin, Propylene glycol, Methyl paraben, Propyl paraben, Span-80 procured from S.D. Fine chemicals Mumbai. All the reagents used were of Analytical Reagent grade. The drug samples were characterized and authenticated by means of UV spectrophotometric method. Determination of solubility and pH is also determined.

Extraction of mucilage: The fresh fruits of Ficus carica were obtained from main market of Sangamner town. The fruits were thoroughly washed with water to remove dirt and debris then cut it into two pieces. The seeds which were present inside the fruit were removed. The pulps of the fruits were crushed. Crushed pulp soaked in water for 5–6 hours then boiled for 30 minutes. Allow to stand for 1 hour to complete release of the mucilage into the water. The mucilage was extracted using muslin cloth bag to remove the marc from the solution. To the filtrate added Acetone (in the quantities of three times the volume of filtrate). The precipitated mucilage was separated, dried in oven at 40°C, collected, ground, passed through a sieve no. 80. Dried mucilage is stored in a desiccator at 30°C and 45% relative humidity till use.

Preparation of transdermal patches: Various ratios of Ficus carica mucilage were taken in a beaker, Propylene glycol (plasticizer) , Span-80 (penetration enhancer) Propyl paraben, Methyl paraben (preservatives) and Pioglitazone Hcl (10 mg) were added with continuous stirring for 30 min at 500 rpm. The above mixture was poured within the glass bangles with a diameter of 6.1 cm, placed on mercury surface of the Petri dish. The evaporation rate was controlled by inverting a funnel over the Petri dish. After 24 hours the patches are dried and stored in desiccator. The various formulae were showed in Table 1. 5, 6

The water absorption capacities of various films were determined at 75% and 93% relative humidity (RH). Films were cut into 25 × 60 mm strips. A strip was weighed and kept in a desiccator at 40°C for 24 h, removed and exposed to RH conditions of 75% (containing saturated solution of sodium chloride) and 93% (containing saturated solution of ammonium hydrogen phosphate) in different desiccators at room temperature. The films were measured periodically for constant weights. The water absorption capacity of the patches was calculated in terms of percentage increase in the weight of patch over the initial weight of the specimen.

Lower part contains the receptor solution, the water jacket for temperature control and the sampling port. The temperature was maintained at 37±2°C. The receptor compartment contained 15 ml of phosphate buffer saline (PBS) IP (pH 7.4) stirred by magnetic stirrer. The permeability studies were carried out across both goat skins. Samples (1.0 ml) were withdrawn and replaced with the same volume of fresh receptor solution, through the sampling port of the diffusion cell at predetermined time intervals till 48 h. Absorbance of the withdrawn samples were measured at 225 nm.

The experiments were done in triplets, simultaneously blanks were also run and the average values reported 11, 12. 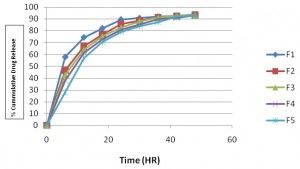 Evaluation of skin irritation potential of Patches: The primary skin irritation studies were carried out using modified Draize test. The hairs of rabbits were removed by shaving from the dorsal area on both sides before 24 hours of test. Untreated skin area serves as the control for the test. Medicated patch was applied on experimental side using adhesive tape and the non-medicated patch was adhered on the control side of six rabbits. These patches were covered with an occlusive till use. The medicated patches were altered after 48 hours and the fresh patches were applied at the same site. However the patches on the control side were unchanged. The patches were applied on the back for seven days. After removal of patch after 7 days each of the areas were examined for any sign of erythema or edema. 13, 14, 15

RESULTS AND DISCUSSION: The result of physicochemical evaluation of Ficus carica patches exhibits uniform drug content with minimum batch variation. The thickness of the patches varied from 645±45.8 to 685±45.8 µm. Tensile strength indicates the strength of film and explains risk of film cracking. But, no sign of cracking in prepared transdermal films was observed, which might be attributed to the addition of the plasticizer, Propylene glycol. The results of tensile strength were shown in Table 2.

Thus, the properties were found to be within limits and satisfactory. The patches did not show any visible erythema or edema with the formulation or the base used.

CONCLUSION: The above study concludes that Ficus carica fruit mucilage can be used as a release retardant matrix forming material for making transdermal patches which retard the release in controlled pattern.