INTRODUCTION: The novel drug delivery technologies are focused to enhance the pharmacodynamic and pharmacokinetic profiles along with the patient comfort and safety. The effective delivery system should be targeted to improve the performance of the drugs. The various methods for targeting orally administered drugs to the colon are covalent linking of a drug with carrier, pH sensitive matrix, timed release systems, bioadhesive polymers etc. Protein carriers had been used as drug delivery vehicles. Casein, a naturally available protein found in milk has been used as a drug carrier.

Casein consists of a large number of proline residues and  is relatively hydrophobic, soluble in alkali. Casein has been reported as a drug delivery agent for many therapeutic molecules like Doxorubicin 1, Theophylline 2,3, Mitoxantrone 4, Progesterone 5, Fluorouracil 6 and Propranolol HCL 7. Casein, a potential matrix for controlled release of the drug has been reported 8. The usage of polymer as steric stabilizers like poly (methyl methacrylate) for the preparation of albumin microspheres has been already established 9,10. Similarly cellulose acetate butyrate 3% w/v has been used for the preparation of casein microparticles 11.

Also usage of oil in the preparation of microparticles needs excess of washing step for complete removal of oil traces, which leads loss of loaded hydrophobic drug during preparation. Hence a method which utilizes easily vaporizable solvent as organic phase and polymeric substance as steric stabilizing agent is needed.

Methotrexate (MTX), the most widely used antimetabolite, is a folic acid antagonist. It has an essential role in the treatment of acute lymphocytic leukemia, choriocarcinoma, non-Hodgkin’s lymphoma, osteosarcoma and breast cancer 12. It is a therapeutic alternative in the treatment of severe psoriasis, suppression of graft-versus-host disease after bone marrow transplantation and various rheumatic diseases. However it has a short half life time of 1.5-3.5 hours when given orally 13 and hence its tumor exposure time is considered short. In order to have an increased tumor exposure time the release of methotrexate can be prolonged. This can be achieved by means of a matrix assisted drug delivery. Eudragit exhibits favorable behavior, such as no toxicity, positive charge and controlled release profile this make them suitable for drug delivery application 14-18. Glutaraldehyde cross linked and Eudragit L 100 casein microparticles were prepared and evaluated for their drug carrying property. 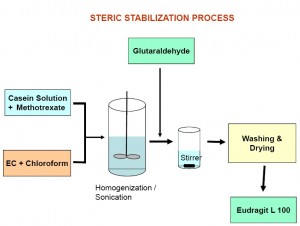 Encapsulation efficiency of casein microparticles: Encapsulation efficiency was calculated by weighing 10mg of the microparticles and dispersing them in 10 ml of phosphate buffer saline19.The sample was ultrasonicated and left to equilibrate for 24 hours at room temperature. The suspension was centrifuged at 5500 rpm and the concentration of Methotrexate was analyzed in the supernatant at 303 nm.

Morphological characterization using SEM (Scanning Electron Microscopy): The diameter and the surface morphology of the prepared particles were analyzed using scanning electron microscopy. The particles were sprinkled on adhesive aluminium stub and then surface coating was done with gold to a thickness of ~300 Å using a sputter coater.

Equilibrium swelling studies of microparticles: A preweighed amount (100 mg) of microparticles was placed in Phosphate Buffer Saline (PBS, pH 7.4) and allowed to swell up to a constant weight. The microparticles were removed and blotted with filter paper, and their changes in weight were measured. The degree of swelling (α) was then calculated from the following formula,

Fourier Transform Infra Red Spectroscopy: FTIR measurements were taken at an ambient temperature. Known amount of samples were grounded thoroughly with Potassium Bromide (KBr) and the pellets were formed under a hydraulic pressure of 600 Kg/cm2. The characteristic adsorption bands for the polymer (casein), Ethylcellulose, Glutaraldehyde, unloaded particles and loaded particles were determined.

RESULTS AND DISCUSSION: In the present study, MTX/CS/Eudragit L 100 microparticles were prepared by steric stabilization method. Crosslinked casein microparticles are widely attracted as carrier for cytotoxic drugs. It is also reported that removal of the free amino groups in the protein reduces its proteolytic susceptibility. This can be accomplished by crosslinking casein microparticles with glutaraldehyde; this increases stability to the microparticles in the gastrointestinal tract. Unlike synthetic polymer employed for encapsulation of drugs, biopolymers have the advantage of better biocompatibility and non-toxicity. This is particularly true with the milk protein casein as it forms an integral part of our daily diet.

The advantages of using polymeric stabilizer include improved hydrophilicity, better particle size control and the absence of adsorbed surfactant that might influence tissue reaction and drug release. However they used a 25-30% solution of polymers such as poly (methyl methacrylate) for the preparation of albumin microspheres. In this method we have used ethylcellulose, a derivative of cellulose as a steric stabilizing agent. The property of ethylcellulose as stabilizer of water-in-oil emulsion was due to its interfacial activity; Ethylcellulose can be used as a polymeric emulsifier. Its stabilizing action was identified to be in part due to the formation of a colloidal precipitate which occurs at the o/w interface. The microparticles were made enteric by coating it with Eudragit L 100 which makes the microparticles to resist the gastric pH and thereby they get solubilize above pH 6. 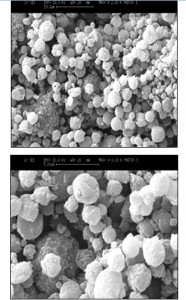 The degree of swelling was found to be more when particles suspended in PBS than in SGF. The release from a matrix-type device, where the release is diffusion controlled is given by the Higuchi model,

FIG. 2 : IN VITRO RELEASE OF MTX FROM MTX/CS/EUDRAGIT L 100 MICROPARTICLES 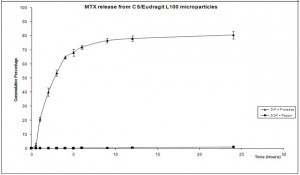 FIG. 3 : IN VITRO RELEASE OF MTX FROM MTX/CS/EUDRAGIT L100 MICROPARTICLES IN PRESENCE OF PROTEASE AND PEPSIN 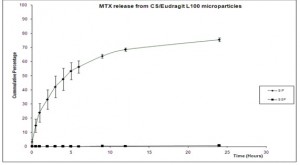 FTIR spectral data were used to confirm the chemical stability of methotrexate in casein microparticles. FTIR spectra of Casein, Loaded casein, Methotrexate, Ethylcellulose and glutaraldehyde are compared in (Fig. 5). In case of pure casein N-H bending vibrations is observed at 1644cm-1. Due to the formation of imine group during the cross-linking reaction an extra peak appeared at 1557cm-1. Methotrexate has the characteristics bands at 2.9-3.1 μm, 3.0-4.0 μm, and 6.5-6.6 μm for –NH2, -COOH, and Amide II vibrations respectively. In drug loaded microparticles these bands were masked may be due to the identical stretching. 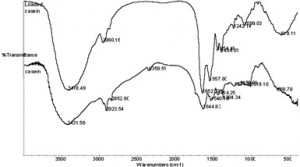 The appearance of band at 1099cm-1 suggests that excess of aldehyde groups were present in final preparation. There were also masking of bands between 1200 cm-1 and 1400 cm-1 which were characteristics of –NH2 stretch in comparing casein and loaded casein, this may due to reaction between glutaraldehyde and –NH2 group of casein.

CONCLUSION: The steric stabilization technique used for the production of microspheres and the Eudragit coating ensures the drug is not released in the gastric pH. The microparticles become pH sensitive due to the enteric coating and thus it enables the release of methotrexate in the intestine. Casein microparticles were resistant to the proteolytic activity of the enzymes which helps in preventing the toxic effects of methotrexate in the gastric mucosa and also it prevents the loss of methotrexate. Ultimately the release of MTX was found in a controlled fashion and the modulation of release can be achieved by changing the degree of cross linking.

ACKNOWLEDGEMENT: The authors thank the management of VIT University for providing the facility and support. Also we do acknowledge Dr Rajkumar (Govt college of Pharmacy, Karad) for his valuable help and the Materials Research Centre, Indian Institute of Science, (Bangalore) for their support in SEM.