ABSTRACT: Type II diabetes mellitus is a serious global health problem and is associated with considerable morbidity and mortality. According to International Diabetic Federation, by 2030 there is 1 adult in 10 will have diabetes. To achieve long term glycemic control, multiple drugs including parenteral therapy with insulin and oral drugs are needed. Hyperglycemia, diabetes associated complications and co morbidities are the strong factors that favor therapeutic poly pharmacy and reduced patient adherence. Materials and methods: It was an experimental study with pre test and post test design conducted in the department of General Medicine, Govt Medical College, Kozhikode. Data were collected from OP sheets, laboratory reports and patient interview with medication adherence questionnaire. Adherence questionnaire prepared based on Morisky 8 item medication adherence questionnaire. Results: A total of 218 patients with type 2 diabetes and associated complications were enrolled into the study from January 2013 to May 2013 after signing the written consent form. Medication adherences have been improved after pharmacist intervention. Poor adherence has been reduced from 48.2% to 26.1%. Moderate adherence percentage rose from 32.1% to 39.1%. There is marked increase in good adherence, after intervention it raised from 19.7% to 34.9%. The RBS level has been reduced after the intervention from 202.00±82.56 to 170±52.93. There is marked decrease in the FBS level of the study subjects. It has been reduced from 155.45±64.04 to 139.19±44.06. PPBS value has been decreased from 189.71±77.89 to 158.56 ±59.42. Conclusion: Non adherence with therapeutic regimen is a problem for health care providers which will reduce treatment outcome and quality of life. Studies in India indicate that more than 50% of people with diabetes have poor glycemic control, uncontrolled hypertension, dyslipedemia and vascular complications. Pharmacists are in a unique position to play vital role in patient’s medication adherence, especially in providing patient education and facilitate safe, appropriate, and cost effective use of anti diabetic drugs

INTRODUCTION: Type II diabetes mellitus is a grievous global health problem primarily defined by the level of hyperglycemia 1. The number of people with type II DM is sprouting in every country and 80% of them live in low and middle income countries with enduring adverse effects in the health and thriftiness of developing countries. India ranked second for the largest number of diabetes patients in the world, where more than 50% of diabetes patients have poor glycemic control 2.

Type II diabetes accounts for 90% of all cases of diabetes and is associated with micro vascular complications like retinopathy, nephropathy and neuropathy. Macro vascular complications include ischemic heart disease, coronary artery disease, stroke and diabetic foot ulcer 3. Dyslipidemia, obesity, renal disease, gastro intestinal problems are also associated with diabetes. The management of hyperglycemia along with complications and co morbidities leads to the condition of therapeutic poly pharmacy and complex drug regimens. Multiple medications and complexity makes difficulty in adherence to therapy 4.

World Health Organization defines adherence is the extent to which a person’s behavior of taking medication, following diet, and/or executing life style changes  corresponds with agreed recommendations from the health care provider 5. Non adherence to poly pharmacy regimen is common among type II DM patients showing an adherence rate between 36 and 93% 6.

Patient education concerning the importance of adhering to their medication is very important in case of diabetes patients and will improve the treatment outcome and quality of life 7. Collaborative drug therapy management is a protocol agreement between physician and pharmacist in which pharmaceutical care including patient assessments, patient counselling, diabetes education, selection and monitoring of drug therapy is provided to patients 8, 9. Even though pharmacists are in a unique position to play a pivotal role in patient’s medication adherence, in Indian situation pharmacist intervention is very less10.

The number of medications in each prescription was noted. Those who taking two to four drugs were categorized as minor poly pharmacy and five or more drugs were categorized as major poly pharmacy. For each questions there were 3 possible answers. Adherence score for never =0, sometimes=1 and always=2. Adherence calculated based on total score.  Patient’s medication adherence decreases as the score of the questionnaire increases.

Score >2 is low adherence, score 1 or 2 medium adherence and score 0 indicates high adherence. Scores were given according to their answers and adherence pattern. After that patient counselling were done regarding disease and medication. Patients were provided with medication reminder chart and asked to submit the chart at the subsequent visit. Follow up was done after one month by re interviewing the patient with the medication adherence questionnaire and pill count method.

Statistical analysis was done by descriptive statistics. Student’s t test –two tailed was used to assess the level of significance in improvement of medication adherence. 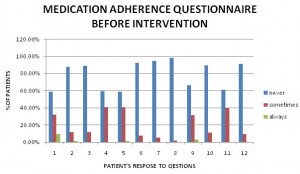 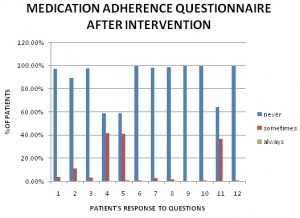 Patients medication adherence before and after pharmacist intervention: 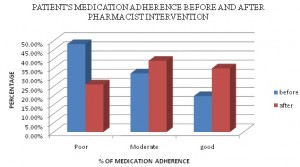 Blood glucose level before and after pharmacist’s intervention:

Medication counselling were done regarding the indication, name, preparation, strength and dose of each drug, and how when and what time to take. Those on insulin therapy were counselled on how to take injection. Counseling also includes symptoms of hypoglycemia and what to do when such situation arises, storage of drugs, what to do if a dose is missed, and the importance as well as benefits of being adhered to regimen. Disease state and associated complications, the need for life style modifications were also included in counselling.

Medication adherence questionnaire has got 12 questions. Each question can be answered as never, sometimes and always.

Question no 2 “do you find difficulties in taking many medications at the same time”. The response to this question did not improve significantly after intervention because the patients were taking the same number of medication throughout the study period and difficulty in taking multiple medications cannot be changed by intervention.

Question no 3 “people sometimes miss taking their medication/injection for reasons other than forgetting. Thinking over the past two weeks was there any days when you did not take your medicine”. 11.5 % patients responded sometimes. The reasons they provided were job timing and miscommunication between patient and medicine provider. After intervention it is changed to 2.8% Question no 4 & 5 “do you sometimes miss to buy medication /injection when the stocks get over” and “are you having any difficulty to pay for your medication/injection”. The response to this question did not improve after intervention because economic problem is a major barrier in medication adherence.

Question no 6 “have you ever cut back or stopped taking your medicine/ injection without telling your doctor because you felt worse when you took it”. 7.8% patients answered sometimes which is slightly improved after intervention.

Question no 9 “when you travel or leave home do you sometimes forget to bring along your medicines/injection. The response before intervention was 66.1% for never, 31.2% sometimes and 2.8% patients said always. After pharmacist intervention the response significantly improved.

Question no 11 “when you feel your symptoms are under control do you sometimes stop taking or adjust the dose of your medicine/injection”. The response to this question does not improve after intervention because the patient adjusts the dose of insulin or oral drugs whenever they experience hypoglycemic symptoms.

Question no 12 “taking medicine / injection every day is a real inconvenience for some people. Do you ever feel hassled about sticking to your treatment plan” before intervention the response was never for 90.8% and sometimes for 9.2%, which was improved after intervention to 99.5% answered never.