Background: In India because of growing pressure on the healthcare budget, appropriate justification of current expenditures and future investments in public healthcare are becoming a priority. COPD is a major cause of healthcare burden worldwide and it is the one of leading cause of death with increasing the prevalence.

Objective: To evaluate the pharmacoeconomic impact of acute COPD exacerbations in a rural tertiary care hospital.

Methodology: It is a prospective, observational study conducted in COPD in patients over a period of 9 months. The patients who satisfied the study criteria were enrolled.

Conclusion: This study concluded that, major COPD patients were farmers and they had less monthly income and it was not sufficient for the treatment of acute COPD exacerbations.

INTRODUCTION: Pharmacoeconomics can be defined as a branch of health economics which deals with the measurement of both the costs and consequences of therapeutic decision making 1.

Pharmacoeconomics involves the utilization of two major methodologies for health economics analysis: cost analysis and cost outcomes. Cost analysis considers the costs of providing healthcare products or services, but does not consider the outcomes experienced by patients or providers 2.

In India, because of growing pressure on the healthcare budget, appropriate justification of current expenditures and future investments in public healthcare are becoming a priority.

Pharmaco-economic analyses are the one which helps in justifying and minimizing this expenditure 3. Chronic obstructive pulmonary disease (COPD) is a state characterized by airflow limitation, usually progressive and associated with an abnormal inflammatory response of the lungs to noxious particles or gases that is not fully reversible 4. Due to sustained worsening of this airflow (acute exacerbations of COPD) normal day to day activities will disturb and which  leads to change in the regular medication, will  increase the health burden and mortality. Guidelines have been developed by WHO (India) under the WHO-Government of India Biennium (2002-2003) program for the management of acute exacerbations of COPD in India 5.

Globally, COPD by 2020 is expected to rise to the third position as a cause of death and at fifth position as the cause of loss of disability adjusted life years (DALYs) according to the baseline projections made in the Global Burden of Disease Study (GBDS). The largest increase in the tobacco related mortality is estimated to occur in India, China and other Asian countries. Cigarette smoking is the major risk factor for COPD 6. Roughly Rs. 32,000 is the annual cost of treatment for acute cases of COPD hospitalization 7, 8.

The studies available on the cost analysis of acute exacerbations of COPD treatment are very less 7. The Cost-of-illness studies showed the economic impact of illness, on society. These costs are generally divided into direct and indirect costs. Direct costs refer to medical care in the form of prevention, diagnostics, treatment and rehabilitation, etc. Indirect costs consist of loss of productivity, which has an effect of society due to days off from work, early retirement, and death caused by the disease 9. Direct costs are again divided into direct medical costs and nonmedical direct costs.

However, some nonmedical direct costs are generally not included in cost-of-illness studies such as research, training, and capital costs (eg. construction)  12.

Currently, there are very little applications of pharmacoeconomics studies in India. As much as 77% of the health care spending in India is in the private sector, of which about 86% borne out-of-pocket/money. The penetration of insurance schemes in India is very low, estimated at about 10% of the entire population. This signifies the importance of economic considerations in health care.

These pharmacoeconomics can be used in drug therapy evaluation, for selecting the most cost effective drug while preparing the formulary, to take a decision on individual therapy and customize patient’s pharmacotherapy. It also helps to evaluate the value of an existing service and to estimate the potential value of implementing a new service 13.

Adichunchanagiri Hospital and Research Centre (AH & RC) is a 750 bedded tertiary care teaching charity hospital situated in the rural area of B.G Nagara of Nagamangala taluk, Karnataka. This consists of four medicine units and no such studies are conducted in this hospital. So the present study was taken first time in our hospital to know the pharmacoeconomic impact of acute COPD exacerbation. This may helps for the physicians to choose the rational therapy, by reducing the cost /economical burden to the patient.

MATERIALS AND METHODS: This was prospective, observational study conducted in, inpatients of  rural tertiary care research hospital, (Adichunchanagiri Hospital and Research Center), B.G.Nagara , Karnataka, India for a period of nine months. The institutional ethical clearance was obtained for carrying out this work.

Source of Data: Patient data relevant to the study was obtained from the following sources

The cost of each medicine was taken from latest editions of tertiary sources, enquiries from hospital pharmacy/community pharmacy and also from medicine strips. From these, unit cost of each medicine was calculated. Since Adichunchanagiri Hospital and Research Center is a charity hospital, the patients admitted to general wards are not charged for bed, nursing and daily routine examination by doctors. But the patients they admitted in ICCU, ICU and special wards are charged for bed, nursing and daily routine examinations. The direct non-medical costs covers sum of expenses like travel expenses, food, and other expenses (supporter expenses) which is directly related to the patient’s.

All information relevant to the study was collected at the time of admission to till the day of discharge and the collected data of cost-of-illness was subjected for suitable statistical analysis. ADescriptive statistical analysis has been carried out in the present study. Results on continuous measurements are presented on Mean ± SD (Min-Max) and results on categorical measurements are presented in Number (%).

RESULTS: A total of 60 patients were approached only 50 patients were consented and participated in the study.  The COPD patient’s age details were shown in figure 1. 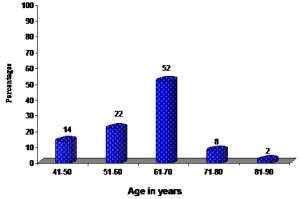 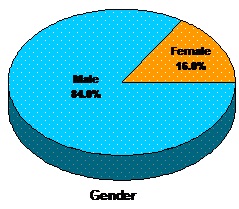 TABLE 1: DETAILS ON DISTRIBUTION OF NUMBER OF DAY’S PATIENT STAYED IN HOSPITAL AND DURATION OF SEVERITY OF ILLNESS

Most of the patients (64%) enrolled in this study were farmers and monthly income was less (fig. 3). 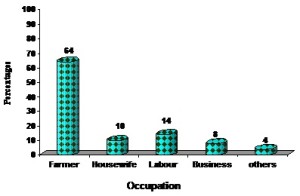 TABLE 3: DETAILS ON DISTRIBUTION OF COST ANALYSIS OF COPD PATIENTS

DISCUSSION AND CONCLUSION: There were very few articles which concentrated on cost-of-illness studies on COPD patients. The study was conducted in a rural and charitable research hospital. The prevalence of COPD was high in this rural area and maximum enrolled patients were formers. The economic status of these patients was poor. This study reveals that patient’s cost-of-illness in acute exacerbations of COPD is the sum of total direct medical and total direct non medical cost.

So, when compared to other studies, travel expenses were less in this study. In general wards, food was provided free for the patients. Patients near to the hospital locality had food from their home. No other particular charges were found here.

Cost Analysis (Total cost): This study calculated the cost-of-illness of patients, from the day of admission to the day of discharge, with acute exacerbations of COPD. The study showed that a minimum cost of Rs. 268.79 and a maximum cost of 10682.12 were needed for the treatment of acute exacerbations of COPD with a mean cost of Rs. 2664.67 and SD 2030.76. The least cost was for the food expenses with a mean of 69.60 and SD 119.20.

ACKNOWLEDGEMENT: Our sincere pranams to Sri Sri Sri Dr. Balaganghadharanatha Maha Swamiji, SAC Shikshana Trust. I would like to thank Dr. B. Ramesh, Principal, SACCP, staff and PGs of Department of Medicine AH & RC, for their timely support and suggestions at all stages of this work.